Accessibility links
Integrating Sunday Morning Church Service — A Prayer Answered The 11 o'clock hour on a Sunday morning is one of the most segregated hours in America, Martin Luther King famously said. Now, one church in Oakland is trying to change that. 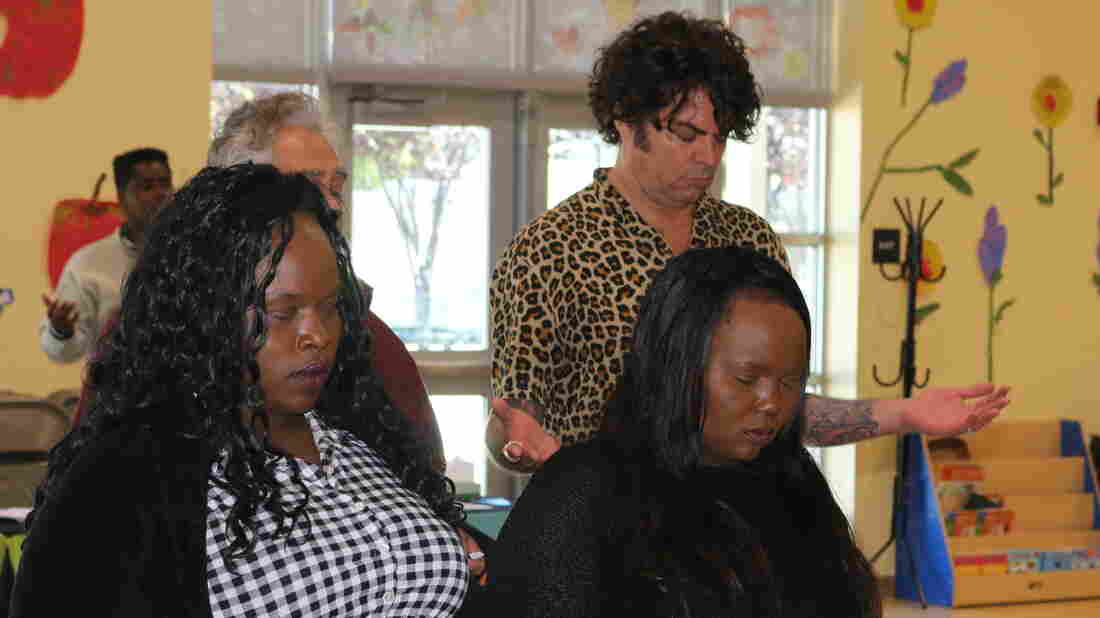 Congregants stand and pray, at the end of the Sunday service at Tapestry Church, an newly, and intentionally, multi-ethnic church. Sandhya Dirks/KQED hide caption 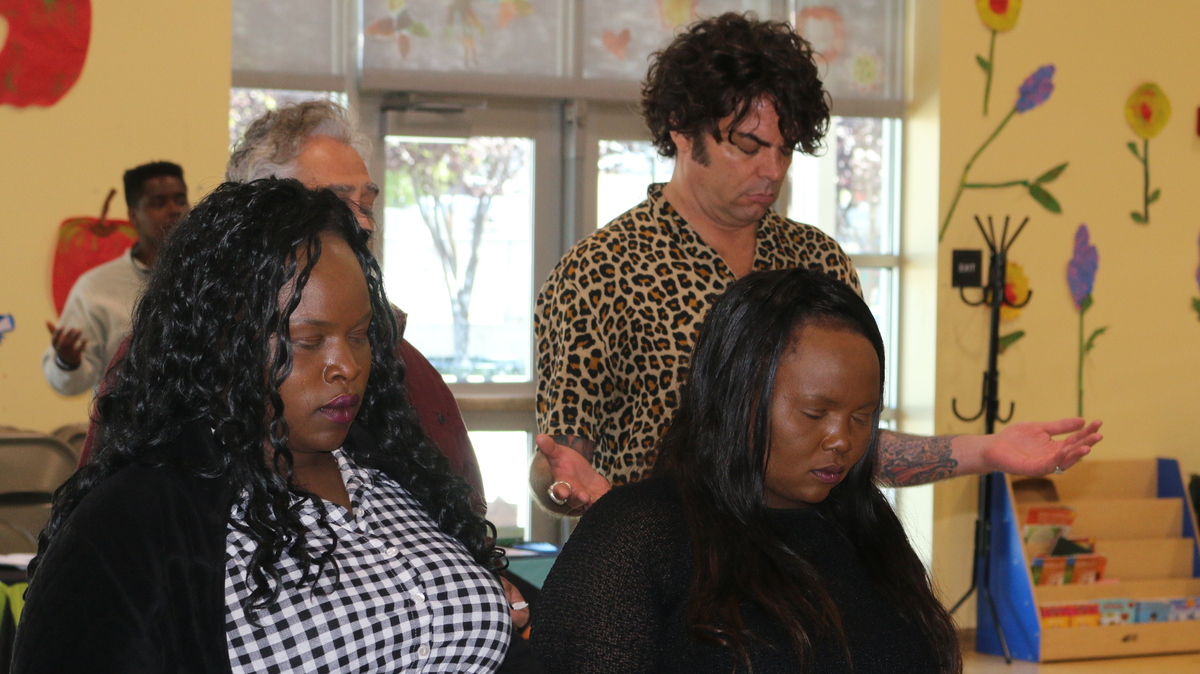 Congregants stand and pray, at the end of the Sunday service at Tapestry Church, an newly, and intentionally, multi-ethnic church.

Churches are some of the most segregated places in America. But two pastors in Oakland are trying an experiment — to merge a white congregation and a black congregation into one house of worship, called Tapestry Church.

It all began one day when Kyle Brooks was running late.

Brooks was the pastor of Oakland Communion, a small mostly white church of newcomers to the city. He was attending the Bay Area Clergy Cohort, a social justice conference for Christian leaders, and stumbled into a group exercise after it had already started.

A facilitator had placed chairs in a pyramid shape. One at the front, then two behind it, then three, and four, and so on. The instructions were simple, sit in the chair that represents your place in society.

Bernard Emerson, the pastor of a small black church called The Way, was on time. He knew exactly where he would sit. As a black man in America, Emerson took a seat in the back row.

By the time Brooks got there, there was only one seat left for him to take as a young white man, the single one right at the front. Right at the top of the privilege pyramid.

That is the "meet-cute" story of their bromance, the one they like to tell. The two started talking and soon realized they were spiritual soulmates. They even quote the same passages from the Bible, like Jesus' prayer in John 17: "Father make them one, as you and I are one."

The two men came from different faith traditions. Brooks was steeped in the Christian Reformed Church and Emerson, whose father was also a pastor, was raised in the American Baptist church.

Emerson said they made a conscious decision to put their friendship and shared love for God ahead of any differences in their spiritual traditions. "We decided then that we would be better brothers than we were pastors," Emerson said.

It was not just bible passages the two had in common. They shared a dream of leading a multi-ethnic church. They talked a lot about what it would mean to create a church in the way that they had created their friendship, rooted in mutual respect and love.

The point of the church is to be a display of God's love for the world. And we can not do that effectively if we do not love each other.

"The point of the church," Brooks said, "is to be a display of God's love for the world. And we can not do that effectively if we do not love each other."

"It was always the intent of our Lord that the church be multi-ethnic," said Emerson. But that is not been the way church has historically been in America.

Things have changed slightly since King said that, but not a lot.

"The vast majority of people who go to church, go to church that is racially and ethnically homogeneous," says Brooks. According to a National Congregation Study, funded by Pew Research, 8 out of 10 American church-goers attend a congregation that looks just like them.

That was the case at both Brooks' and Emerson's small churches. For Pastor Emerson, it was especially true; a lot of his congregants are actually members of his extended family, so they really do look like him.

While that Martin Luther King Jr. quote is often paraphrased and repeated, it's not all he said that day. "Any church that stands against integration and that has a segregated body, is standing against the spirit of Jesus Christ and it fails to be a true witness," he said. He admitted his own church was also not integrated. It was King's belief that the church would not, like schools in America, be integrated through legal processes or outside pressure. American churches would only integrate if they decided to do the work themselves. 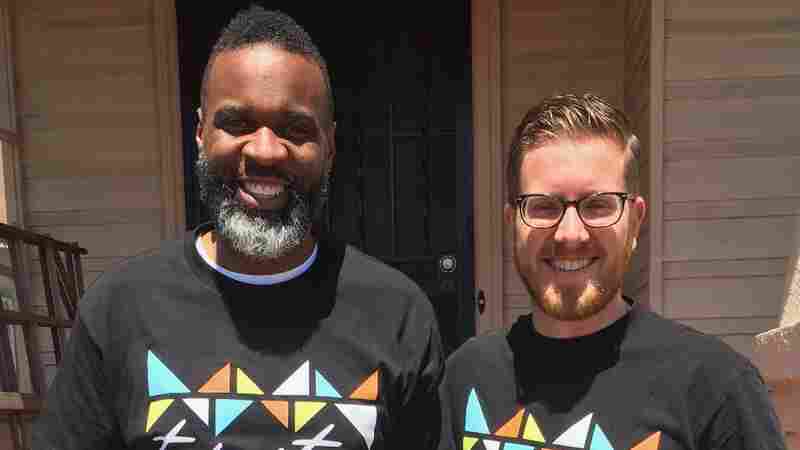 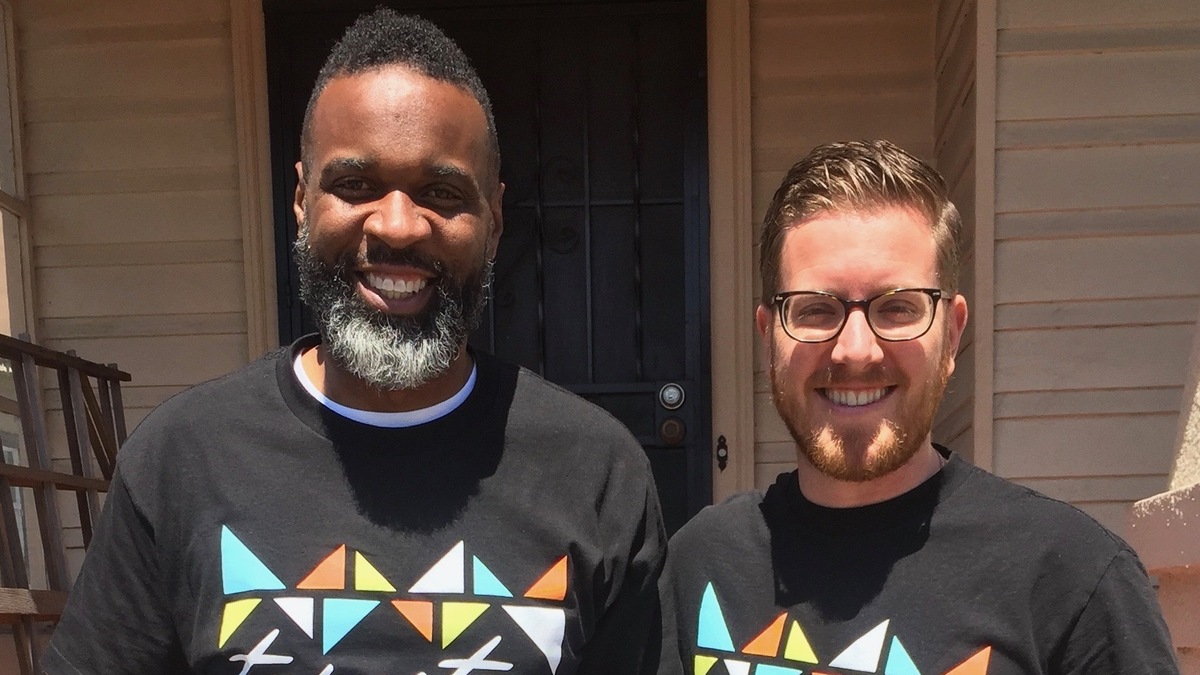 Which brings us to Pastor Kyle Brooks and Pastor Bernard Emerson. They knew creating an inter-racial church was not going to be easy, but they kept kicking the idea around. They would take long walks through Oakland's Dimond District and dream about it out loud. Maybe at some point in the future, they thought.

Then a year ago, Neo-Nazis marched in Charlottesville, Virginia, and they felt like they could no longer wait.

First, they had to break it to their congregations.

"I saw it on facebook, and instantly I typed back, 'oh my god, this is exactly what I've been looking for,'" said LaSonya Brown, who had been attending Emerson's church, The Way, for about a year. "I'll be the first one to join," she said.

Brown was raised in a black church with only two white people in it. One was her godfather, who had married into the black community, the other was a white woman who would "speak in tongues, and then translate the tongue."

"I never knew her name, but I'll never forget her," Brown said. Despite it being different than what she had known before, Brown welcomed the idea of an inclusive congregregation. "I think it was something that I wanted, but I didn't realize that I wanted it until I saw his post," she said.

At first she thought it was going to happen instantly, just everyone showing up to church together. But it is not that easy to flip the switch on hundreds of years of segregated worship.

"It's much more complicated than that," Brown said. "You don't think that your life is different than somebody else," but it can be. In an ideal world, she said, people want to think about what they have in common and not their differences.

But we do not live in that ideal world of race relations. "There's a lot of things that we don't do in common," she said. "But we do want to know how to be together."

Each church individually went through months of workshops and classes, owning up to their own fears about what merging would mean.

Many people in Pastor Brooks' white congregation were afraid of being uncomfortable. There was a feeling of discomfort around everything from different hymns, to the service being in a different neighborhood, to different styles of worship. There was also discomfort in having to face up to their responsibility, as white people, in ongoing American racism. Everyone in the church was excited about the merger, but that did not make it easy.

Pastor Emerson's congregation was also supportive, and not just because they are largely family. The black congregants of The Way had different fears, fears that they might not be welcomed. Emerson said some of them asked, "will they accept us for who we are?"

"I was afraid that the person that I think I am, is not the person that I really am," said LaSonya Brown. She worried she might find out she was not as open to difference as she wanted to be, that she might not be the person who saw her Pastor's post on facebook and declared she would be the first to sign to up for an integrated church.

There have been tests, like tensions over what kind of food to serve at coffee hour. A couple of interactions came off as rude. Brown said she thinks it may be similar to people speaking different languages, and things get lost in translation. They are still learning how to talk to each other.

Her church now, the church she loves, is no longer The Way, because after months of talking and getting to know each other and learning each other's songs, this past June, the two churches became one: Tapestry Church. 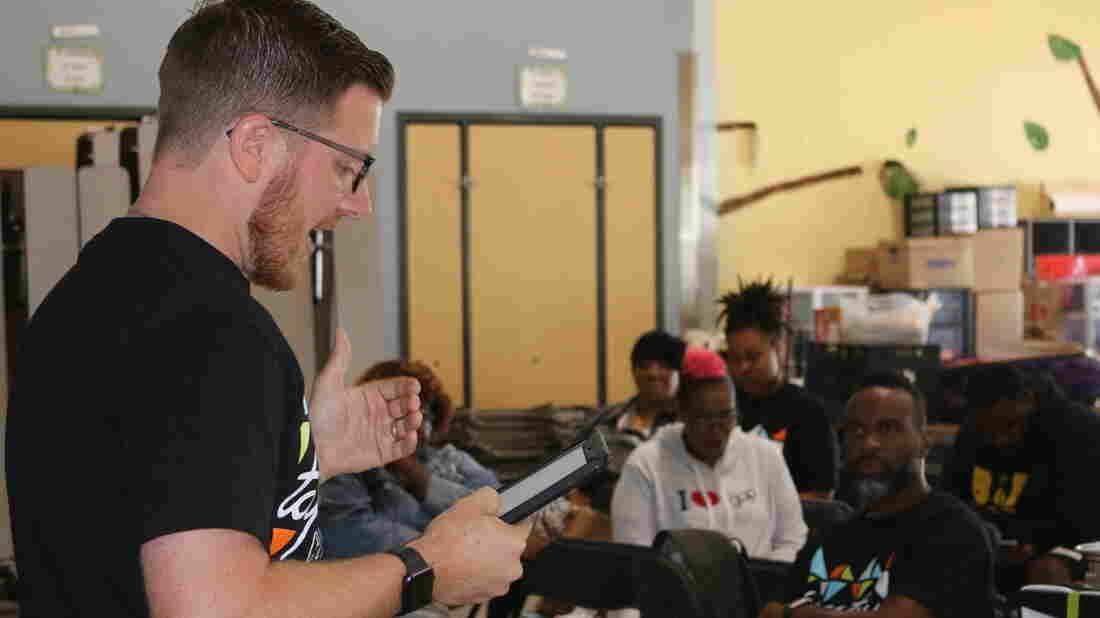 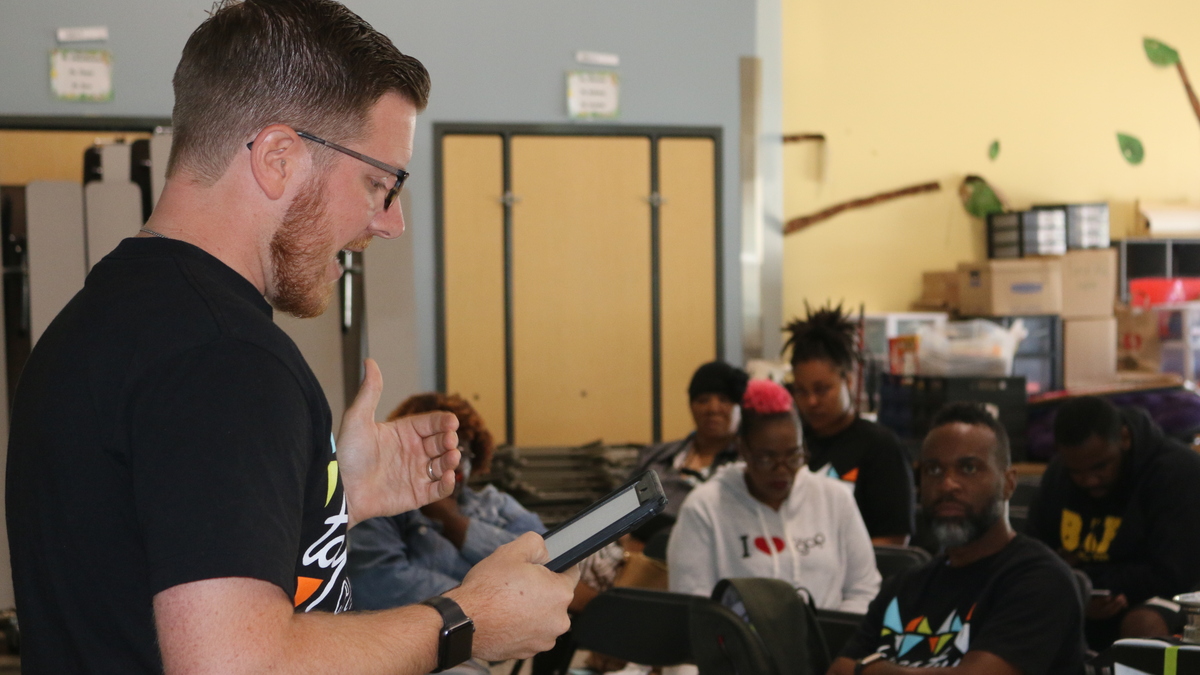 On a recent Sunday morning, about 25 people gathered in an East Oakland school cafeteria with children's paintings of flowers on the walls.

The pastors say they've retained most of their original congregants. Not everyone comes every Sunday. They are still a small church.

Brooks and Emerson take turns preaching, but they talk through their sermons together. There's a melding of worship styles on display. The black church is well known for a vociferous call and response, something Brooks is really excited about. "It helps!" he said. "It's a dialogue and a feedback."

"One of the cool things I love is that there are some people who have never done it, but inspired by some else, they yell out," Brooks said.

"This has been a prayer answered," said Kim Emerson, Pastor Emerson's wife. "It was always our dream to have a multi-ethnic church and that wasn't happening. It sometimes seems like you draw like-minded, or like-looking, people."

Now, they are drawing some new congregants. After service they hold events like 'Pizza with Pastors,' trying to get newcomers to stick around. The pastors tell their origin story, and people stay and eat and talk with each other.

Dwight Davis and his husband moved to Oakland 14 years ago. Davis says they have probably visited every church in Oakland, but they keep coming back to Tapestry.

We're gay people. So it's nice to come into a place and not feel everybody's like, 'you're going to burn before me,' you know?

"We're gay people," Davis said. "So it's nice to come into a place and not feel everybody's like, 'you're going to burn before me,' you know?"

They had been searching for a diverse congregation, "where the communities came together and we could be apart of both."

But Davis says it felt awkward to show up at a traditionally black church, especially with so many African American residents being displaced from Oakland by waves of mostly white newcomers. "You know with the gentrification and everything" Davis said, he felt uncomfortable at some churches, like he was "treading on somebody's territory."

The pastors say that integrating America's most segregated hour is not an easy, one-step process. It can be uncomfortable. There is no magic spell that allows you to snap your fingers and have it all be harmonious overnight.

"You're actually bringing people together who have deep and long and somewhat painful, traumatic histories with each other," said Brooks.

It will take time and love, alongside a willingness to be uncomfortable and honest. It will take people coming back Sunday after Sunday.

Sandhya Dirks is a reporter at member station KQED