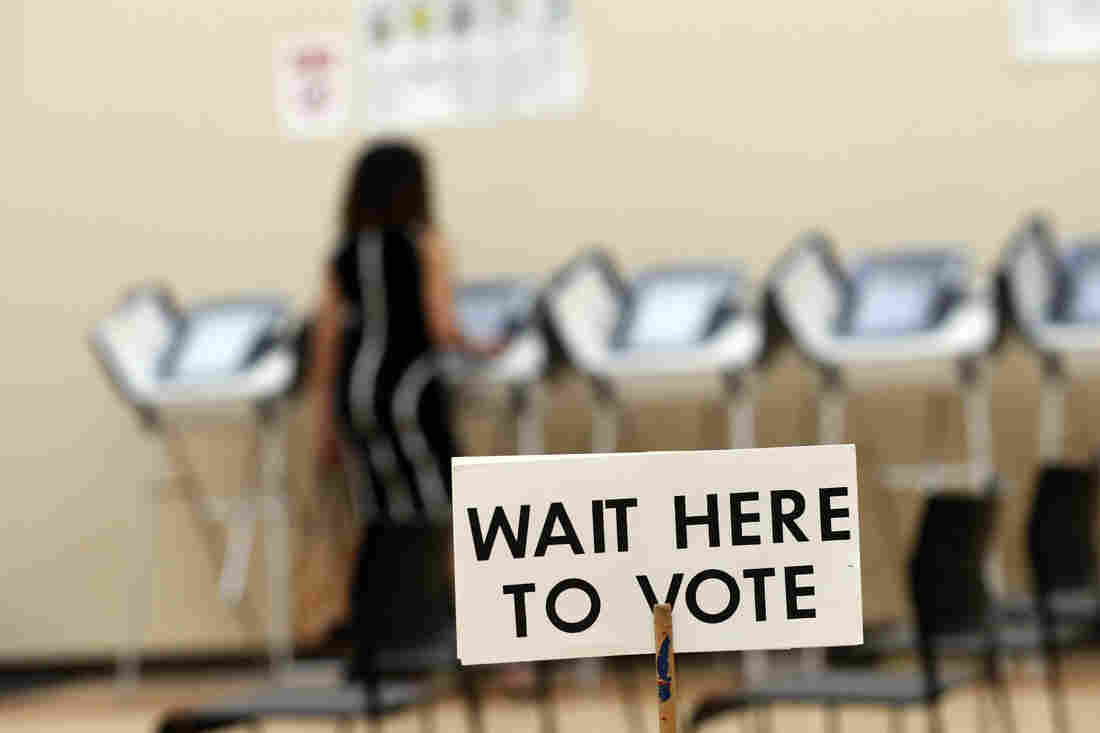 A voter in Sandy Springs, Ga. on May 9, 2018. Georgia is one of 14 states that use electronic voting machines that don't produce a paper trail to verify results, which concerns many security experts. John Bazemore/AP hide caption 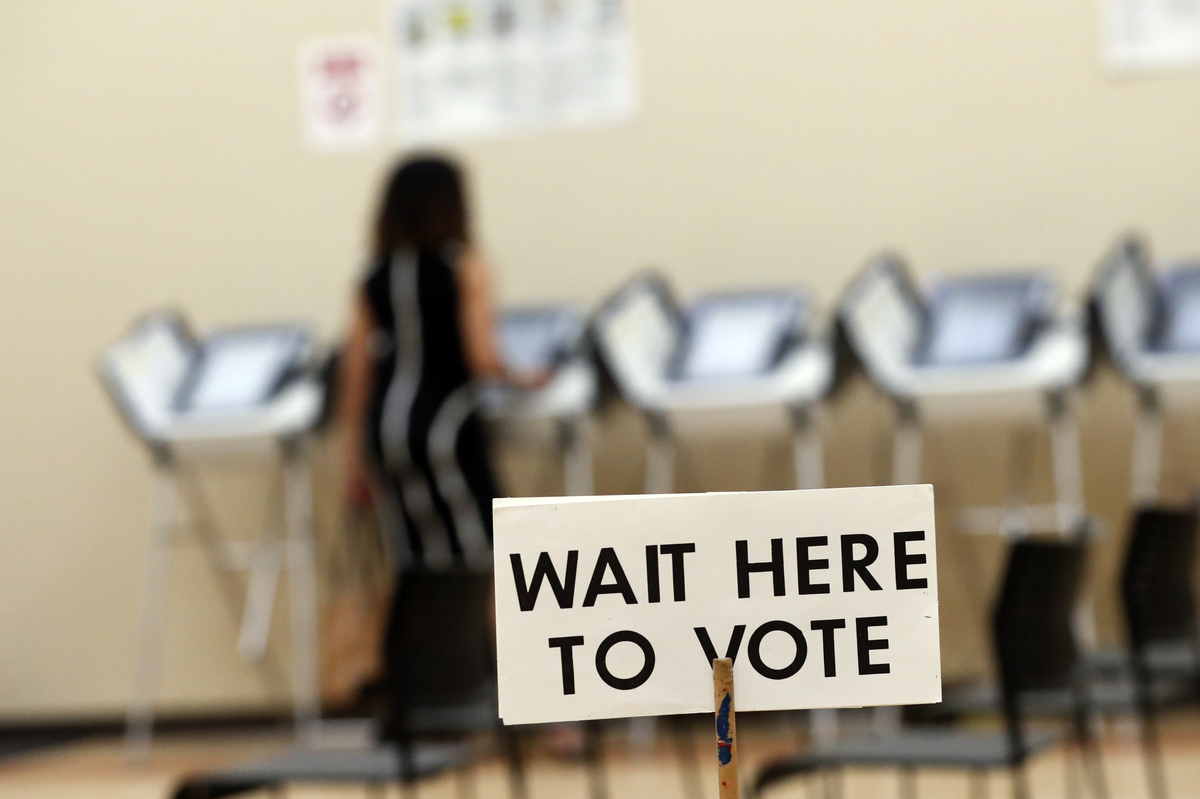 A voter in Sandy Springs, Ga. on May 9, 2018. Georgia is one of 14 states that use electronic voting machines that don't produce a paper trail to verify results, which concerns many security experts.

In the fall of 2016, as reports of Russian-backed hacking of state election systems were surfacing, Georgia's Secretary of State, Brian Kemp, rejected federal offers of help to secure his state's voting systems.

"The question remains whether the federal government will subvert the Constitution to achieve the goal of federalizing elections under the guise of security," Kemp told a technology website.

Now, Kemp is the Republican nominee to be Georgia's next governor, and in another election season where cyber-attacks are in the air, his record securing the state's elections is becoming a campaign issue.

This past week, the Georgia Democratic Party called for Kemp's resignation, citing in part his response to Russian-backed hacking attempts of state voting systems in 2016.

Georgia is one of 14 states that uses electronic-only voting machines without a paper trail voters can verify for themselves. Cybersecurity experts agree this leaves elections more exposed to potential hacking and technical problems. Georgia is the most populous of five states using electronic voting machines statewide.

"Here we are. Three months before an important election. Living with the reality that once again Georgia voters might be going to the polls and not know if your vote actually counts," Democratic activist Caroline Stover told a crowd of 100 Democrats as they sipped beers and ate tater tots at an Atlanta bar last week.

A handful of Georgia voters filed a pending federal lawsuit pushing the state to use paper ballots in this fall's midterms.

But Democrats like Stover want Kemp to order a switch to paper ballots right away.

Earlier this year, Kemp formed a commission to look at moving the state to new voting technology with a paper trail. But he says that switch shouldn't happen before this fall's election because it would cause chaos at the polls, and potentially suppress turn-out.

"That would be an absolute disaster, changing from the current system we have now to paper ballots," Kemp said in an interview.

Georgia was not on the list of 21 states that the Department of Homeland Security said had been targeted by Russian hackers in 2016. But a recent indictment by special counsel Robert Mueller of 12 Russian intelligence officers revealed that they had visited county election websites in Georgia and other states.

"There is no evidence that either of the county webpages were compromised as a result of this activity," read a letter sent by the state to local elections officials.

The state said it assumes the Russian visitors were "conducting research to assist future potential operations."

And Kemp said his management of technology issues as Secretary of State bolster his campaign's message, citing added firewalls to protect data, and regular work with vendors to to conduct cyber scans and security training for employees.

"If anything my record is a strength for me," Kemp said. "I'm glad to talk about that record all day long."

But Kemp and DHS have had a rocky relationship in the past.

Ahead of the 2016 election, Kemp criticized a proposal from then-DHS Secretary Jeh Johnson to designate voting systems "critical infrastructure" giving them enhanced protections similar to the electrical grid, for example.

Before and after the election, Kemp's office declined assistance from the Homeland Security department to bolster the state's voting systems.

"It's so frustrating that people keep bringing that up because DHS was offering to the states the same exact things that we had already been doing" with private contractors, Kemp said.

Kemp said the relationship between DHS and his office has improved under the Trump administration.

"We've been in constant contact with them," he said. "The communication level with the states is much better than it was when Obama and Jeh Johnson were there."

Kemp is running against Democrat Stacey Abrams in a polarized race attracting national attention and money.

In the first two weeks of the general election campaign Abrams has mostly shied away from attacking Kemp over how he's overseen elections. But other Democrats are fired up about Kemp's record on election security.

For her, Kemp has no business overseeing any election when he's on the ballot himself.

"I think he's not only failing in his duty, but he shouldn't have it," Starling said. "He should not have that responsibility anymore."

Kemp is brushing off the Georgia Democratic Party's calls for him to resign even though some past Secretaries of State running for higher office here have stepped down.

"The same people that are criticizing me on that," said Kemp "If I resigned...they'd be criticizing me saying 'you're scared, you're leaving your office, because you don't want to have to take responsibility for running the election because it's not secure or whatever.' So I mean I think that's just a political argument."

Before Kemp won the GOP's gubernatorial nomination, some in his party questioned his performance on the job.

Since Kemp won the primary, Georgia Republicans are quieter about Kemp's record on election security.

Marian Schneider is president of Verified Voting, a non-profit that advocates for paper ballots. She said election administration in the U.S. has always brought partisanship. Today, she worries it will hurt the country.

As candidates in Georgia fight to win over voters, they'll also be arguing about whether the technology used to cast and count their votes can be trusted.