Accessibility links
'The Line That Held Us': Noir In Appalachia Novelist David Joy, whose books chronicle the rural, working-class South of his own milieu, has penned a new book where a hunting accident triggers a thriller of violent vengeance. 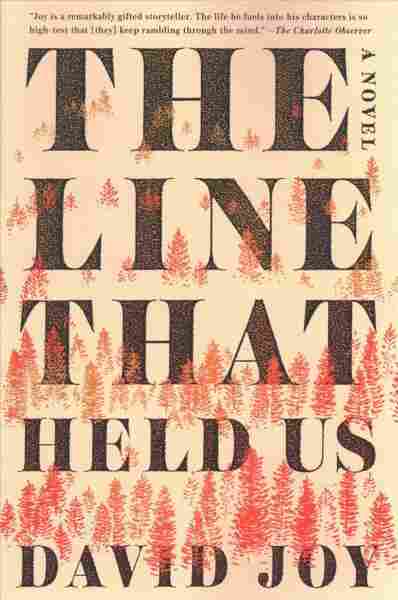 The Line That Held Us

Title
The Line That Held Us
Author
David Joy

David Joy's new novel The Line That Held Us begins with a terrible accident.

Darl Moody is looking to poach a deer in the woods, when he accidentally kills another man — Carol Brewer, who is himself poaching for ginseng roots. Both are "working-class rural people who are just kind of doing what they have to do in order to survive," as David Joy says in an interview.

That shooting leads to a cover-up that spins out of control. Along the way, we meet a fascinating and ferocious character: Dwayne Brewer is a giant of a man who will not rest until his brother Carol's death is avenged.

The book is set in Appalachia, where Joy lives. In fact, we spoke to him last year about his essay "Digging in the Trash," where he lamented the misportrayal of rural Southerners. Like his nonfiction essay, his new work of fiction is personal to him.

"I think a lot of times, rural working-class people are stripped of their humanity, and I'm very much trying to give that humanity back," Joy says. "On the other side of that is that I'm trying to document some of the things that I think are disappearing. I think that we're within a generation of a lot of the old mountain ways being gone."

On the importance of family and friends in this setting, with respect to Darl's best friend Calvin Hooper

'Digging In The Trash': How Poor Southerners Are Seen

'Digging In The Trash': How Poor Southerners Are Seen

One thing that's kind of indicative of this area is that family is an incredibly important thing. People are still very much rooted to family and rooted to place. And so this is not just your everyday friendship, this is very much — it might as well be his sibling, it might as well be blood. And so when [Darl] calls on Calvin Hooper, Calvin would have done anything in the world for Darl. And so very early on, we've got this relationship building where the question is: How much do you love someone, you know? How much are you willing to risk in order to protect the ones you love?

You know, as far as the character who grows the most over the course of the book, it's very much Calvin. And that growth comes about because Dwayne forces him to make that decision. He forces him to realize who he loves selflessly.

On the memorable character Dwayne Brewer

Dwayne Brewer and his brother Carol grew up kind of in an abusive home, and he also — he grew up at the very, very bottom-most levels of poverty to the point that kids at school made fun of him because of the shoes he wore, or they made fun of him because [of] where his mother worked. Dwayne has always protected his brother because Dwayne, he's a lot more physical, a lot more violent than Carol ever was, you know. Carol was very much a turn-the-other-cheek kind of guy, and Dwayne was much more a grab-you-by-the-throat.

On the fetishization of Southern Gothic or Southern noir literature, and its relevance to the current political moment

And then at the same time, you know, I think it's also always kind of been — those have been major themes in Appalachian literature and in Southern literature — and Appalachian culture. I mean, when I think about the old murder ballads that they played in bluegrass, it was that same type of thing, those same types of stories. That history — I'm not sure why that history exists. But as far as how it relates to what's happening nationally right now, I think maybe it's more pertinent right this second than it's ever been.

Peter Breslow and Evie Stone produced and edited this interview for broadcast. Patrick Jarenwattananon adapted it for the Web.

Read an excerpt of The Line That Held Us