Accessibility links
Tens Of Thousands Of Romanians Protest Corruption, Demand New Government Rallies in Bucharest and other cities were largely organized by expatriates who came home to demonstrate en masse. Police responded violently on Friday, but protests continued on Saturday and Sunday. 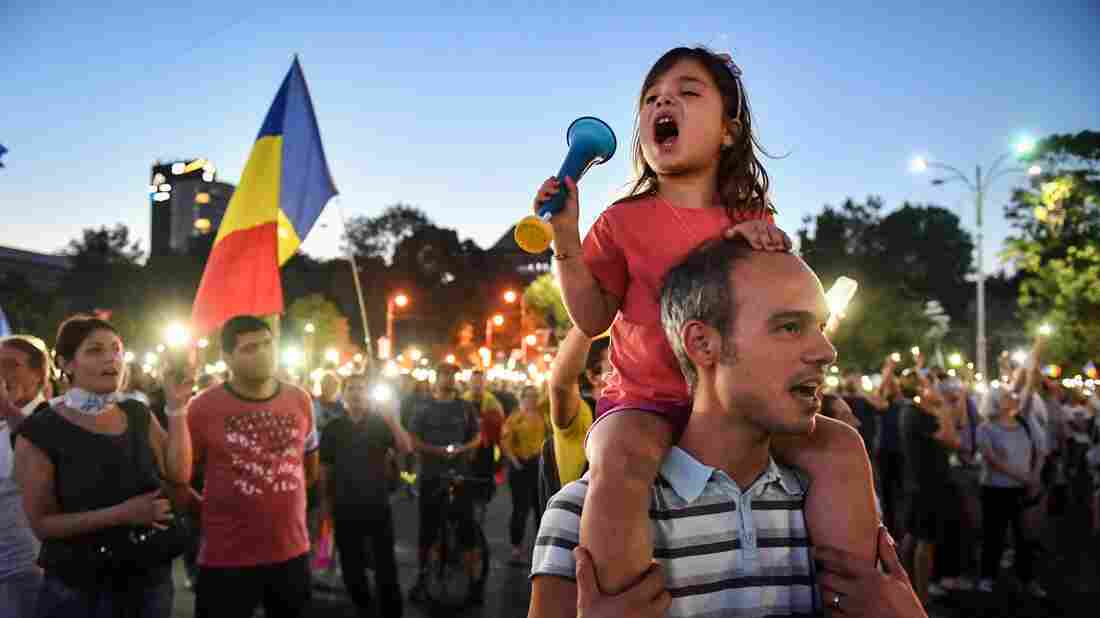 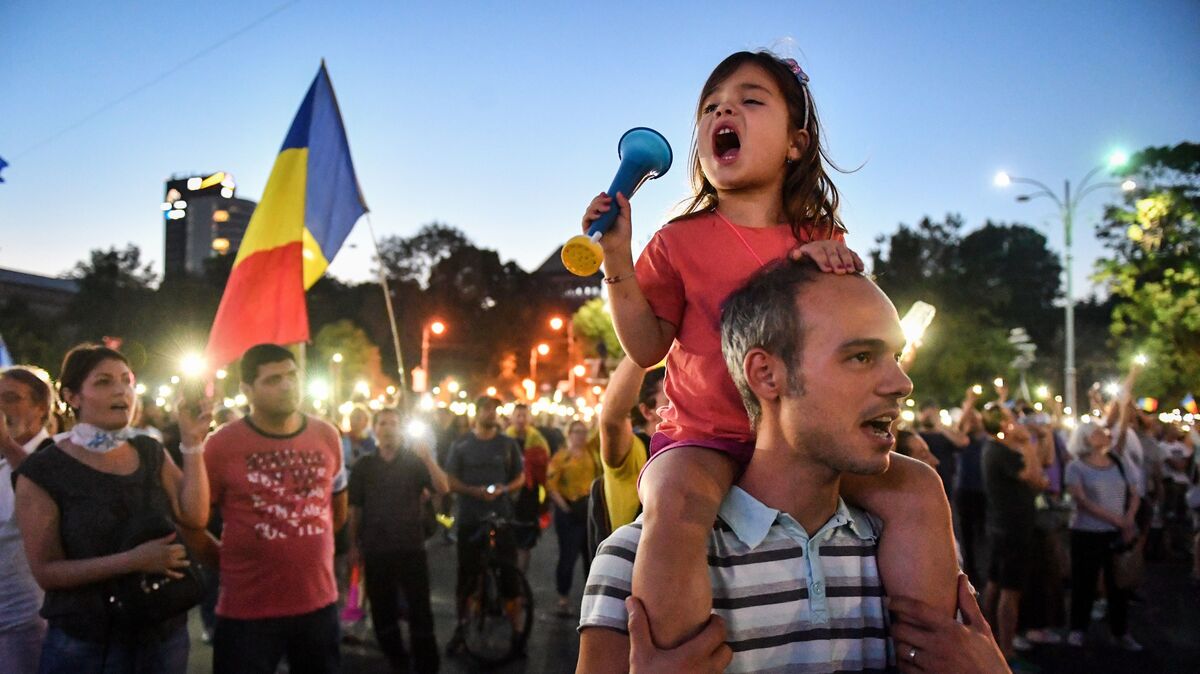 Anti-government protesters rally at Victoriei Square in front of government headquarters in Bucharest, Romania, on Sunday. Hundreds were injured during Friday's mass demonstration.

For three days in a row, throngs of protesters took to the streets in Romania's capital city, Bucharest, to protest what they see as a corrupt government and to call for new elections.

Tens of thousands of people rallied Friday on the first day of demonstrations, which were largely organized by Romanian expatriates who came home to demonstrate en masse; some estimates put the crowd at 100,000.

The police used "unprecedented violence" to clear the square, Romania Insider writes. Hundreds of people were said to have been injured.

But the protesters were undeterred, returning on Saturday and again on Sunday.

Rallies in Bucharest and other major Romanian cities were peaceful on Sunday, Reuters reports.

Photos show protesters holding up glowing cellphone screens, which have become a symbol of anti-government and anti-corruption protests in Romania. 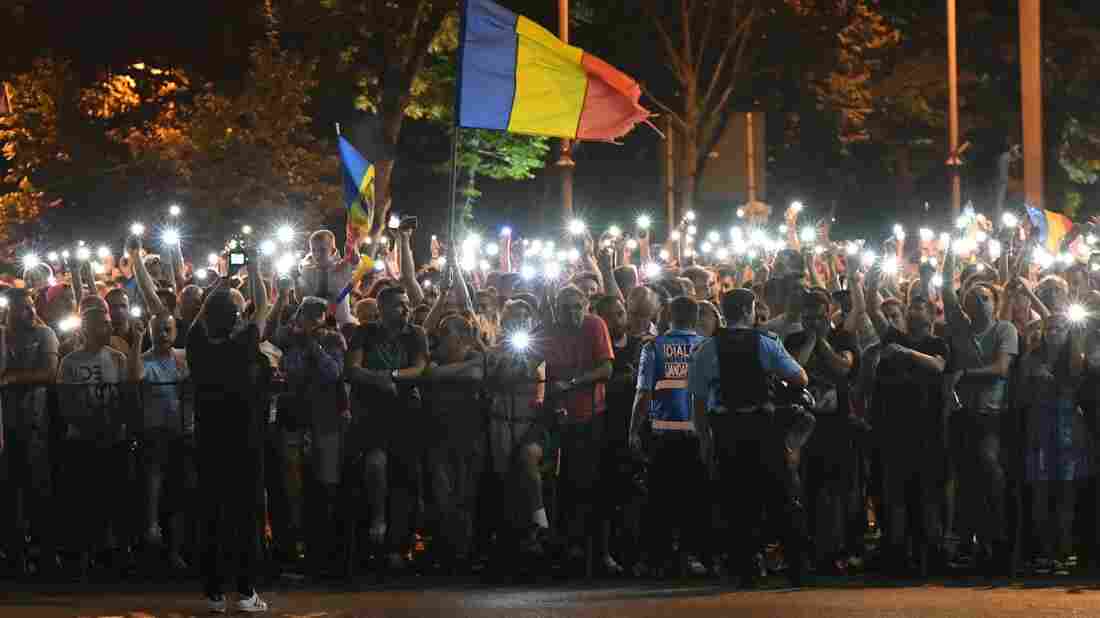 People wave Romanian national flags during a demonstration against the government on Saturday, during the second day of protests. Daniel Mihailescu/AFP/Getty Images hide caption 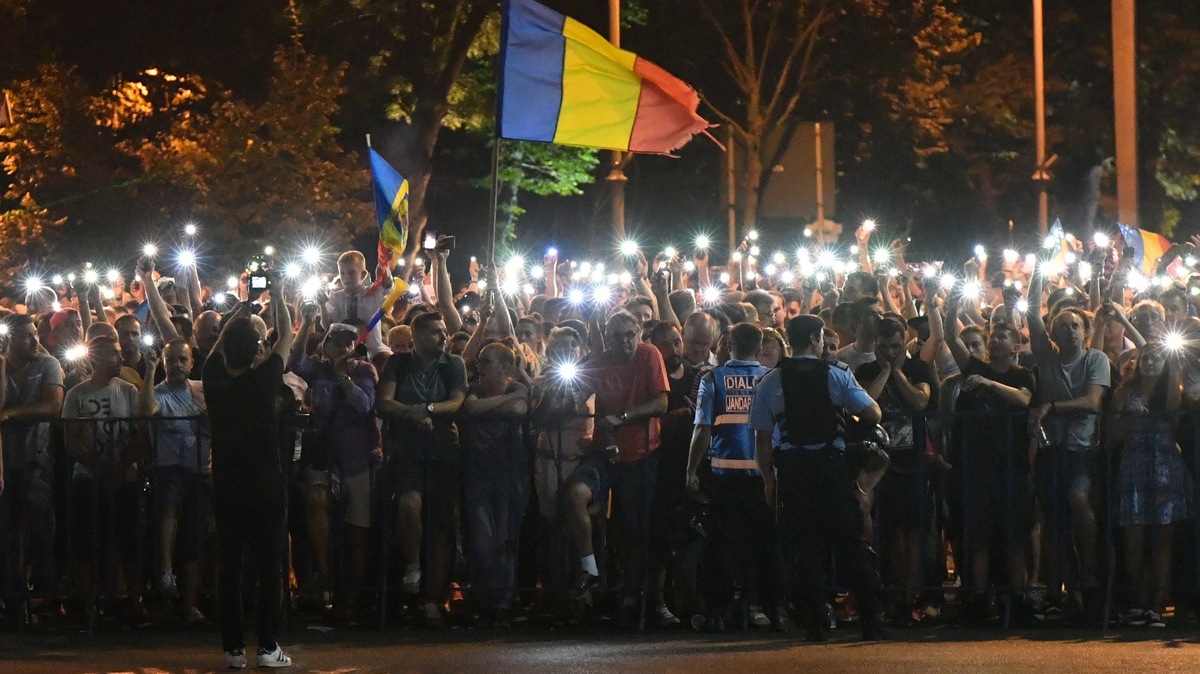 People wave Romanian national flags during a demonstration against the government on Saturday, during the second day of protests.

The Associated Press reports that the protesters were calling for Romania's left-wing government to resign:

"The expatriates supporting the event in Bucharest, some of whom drove across Europe to attend, said they were angry at how Romania is being governed. Critics say the country has lost ground in fighting corruption since the ruling Social Democratic Party assumed power in 2016.

"An estimated 3 million Romanians live abroad, and some say they left because of corruption, low wages and a lack of opportunities.

Among other things, protesters pointed to recent efforts by the ruling party to weaken the judiciary. Critics say changes the proposed changes could be used to lessen punishment for elected officials convicted of wrongdoing, Bloomberg writes.

The head of the ruling Social Democratic Party, Liviu Dragnea, was sentenced to prison earlier this year for a case related to abuses of power, but he remains in office as the case is appealed. Dragnea was previously convicted of election fraud.

"Romania is one of the poorest and most corrupt countries in Europe and it's been that way for years," NPR's Soraya Sarhaddi Nelson wrote in 2014.

That year, an anti-corruption candidate, Klaus Iohannis was elected president and launched a campaign to tackle graft and the misuse of public funds.

President Iohannis posted on Facebook to say he strongly condemns the violent tactics of police intervention at the protests over the weekend.

But Iohannis' party does not control the legislature, where the Social Democratic Party leads a coalition government that has repeatedly attempted to reduce punishments for corruption.

In 2015, Romania's prime minister — a member of the Social Democratic Party who was tried for corruption, fraud and tax evasion while he was in office — resigned after a deadly nightclub fire that was blamed in part on corruption and poor safety oversight.

But his party continued to control the legislature.

Last year, the government attempted to decriminalize several forms of graft, backing off the plan only after enormous mass protests.