Accessibility links
Another Firefighter Dies Battling Northern California Wildfire Officials say the firefighter died Monday at the site of the Mendocino Complex Fire. Over the past several weeks, a total of six firefighters have died in connection to wildfires. 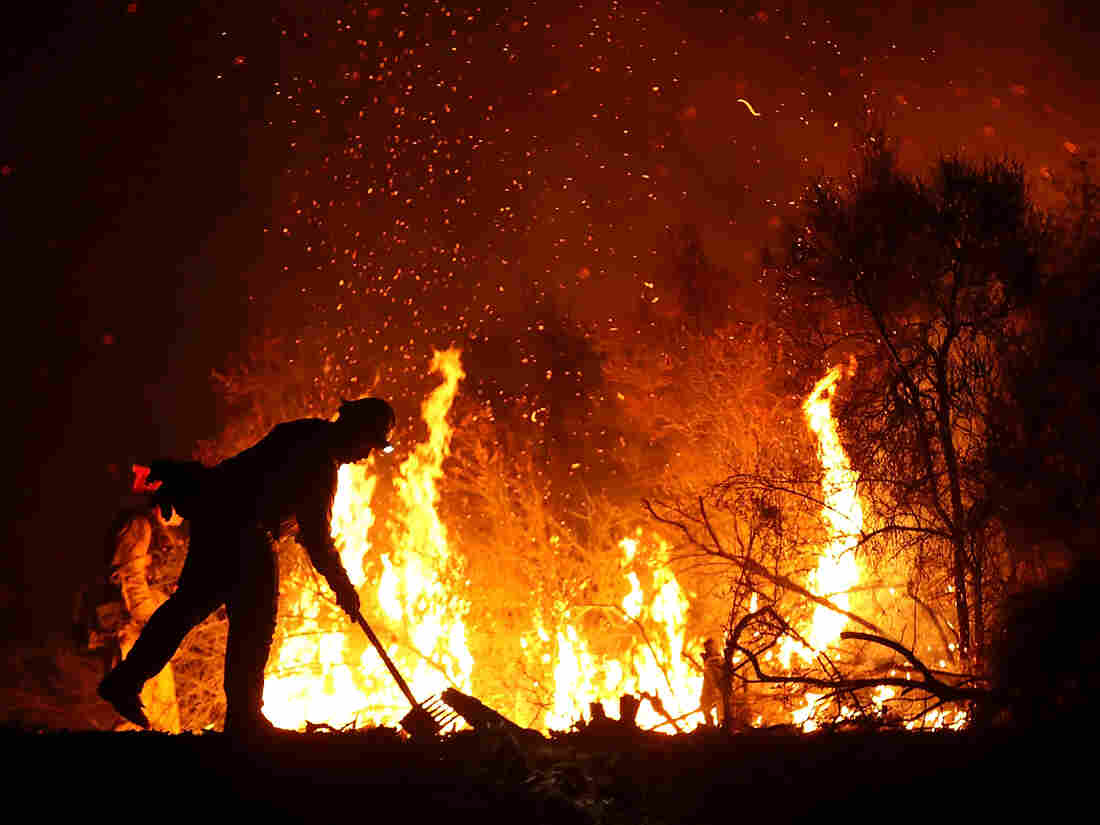 A firefighter monitors a back fire while battling the Medocino Complex fire on Aug. 7, near Lodoga, Calif. The Mendocino Complex Fire, which is made up of the River Fire and Ranch Fire, has become the largest wildfire in state history with over 344,890 acres charred. Justin Sullivan/Getty Images hide caption 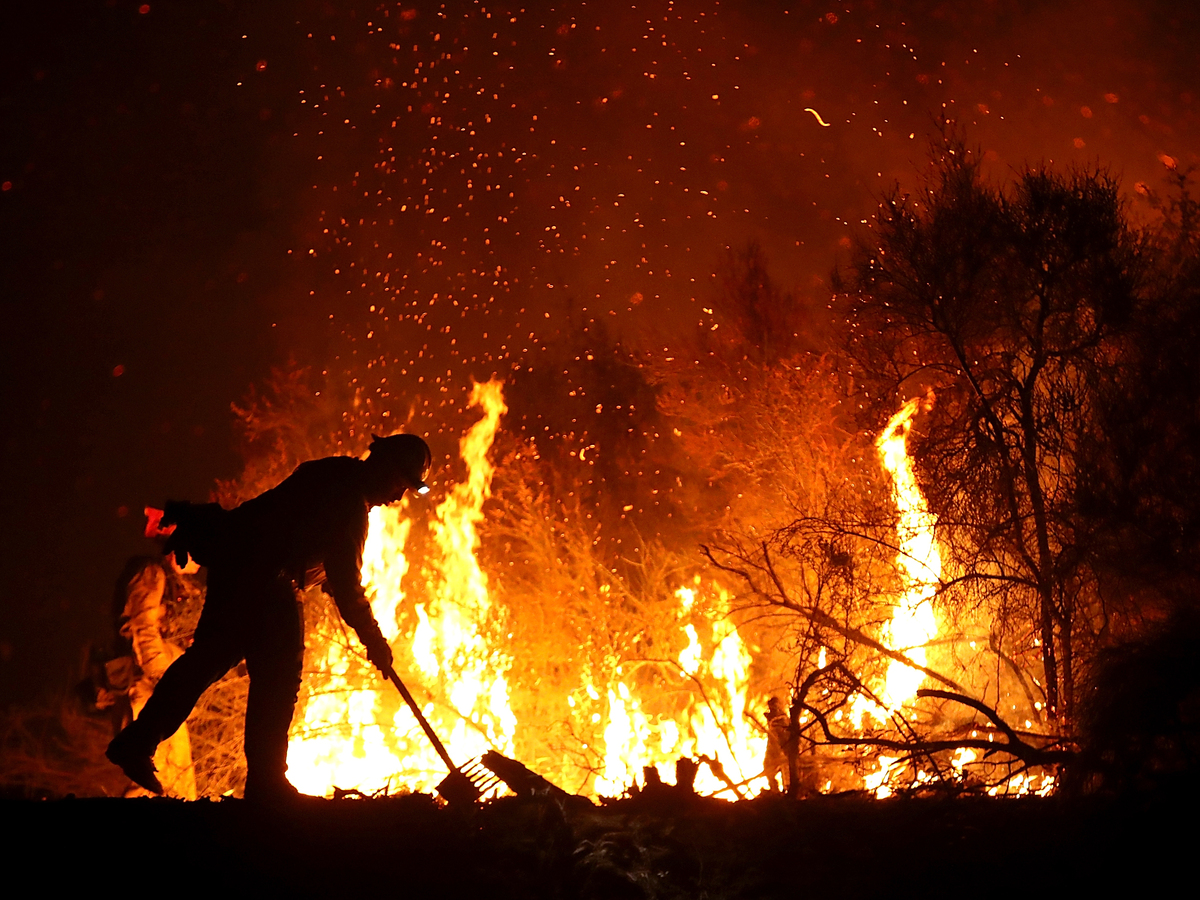 A firefighter monitors a back fire while battling the Medocino Complex fire on Aug. 7, near Lodoga, Calif. The Mendocino Complex Fire, which is made up of the River Fire and Ranch Fire, has become the largest wildfire in state history with over 344,890 acres charred.

Officials with the California Department of Forestry and Fire Protection announced Monday that a firefighter died battling the Mendocino Complex Fire. The firefighter's identity was not released and no other details were given. Officials tell the Los Angeles Times that "fact finding on the accident" is underway.

Despite the somber news, fighters are making headway against more than a dozen blazes that continue to scorch massive swaths of the state, in large part because of cooling temperatures over the weekend and on Monday.

Favorable weather conditions in northern part of the state offered a window of opportunity to contain 68 percent of the Mendocino Complex Fire, which has ripped through approximately 345,000 acres since it began on July 27.

The River Fire, the smaller of two blazes that make up the Mendocino Complex, has been mostly contained at nearly 49,000 acres since Saturday, Cal Fire reported. Meanwhile, the Ranch Fire continued its spread across another 13,000 acres leading into Monday morning. In all, it has burned 295,970 acres, putting it on track to become the state's first single 300,000 acre fire.

"The significant challenge for the Ranch Fire is the terrain it's starting to burn into. It is extremely dry and susceptible to fire," Derek Tisinger, Cal Fire Battalion Chief and Public Information Officer told NPR.

A combination of state, federal and international crews are struggling to establish 50 miles of fire line, Tisinger said — but with 93 percent of the River Fire under control, there is a tremendous sense of relief among those battling the flames.

"It's always easier to have a single point of focus rather than two. Now we can focus on the challenge of the Ranch Fire," he said.

Late Monday, officials announced that a firefighter had died while combating the Mendocino Complex fires; no further details were made available.

So far the fires have destroyed 139 homes and 119 structures. It is currently threatening more than 1,500 others.

Cal Fire predicts the Mendocino fire will be fully contained by Sept. 1.

Firefighters battling the Carr Fire further north — near Mount Shasta — did not have the same reprieve from scorching temperatures over the weekend, Jason Shanley, a Cal Fire spokesman told NPR. But despite the unrelenting heat and the fire gaining about 20,000 acres, the fire is now 61 percent contained.

It is currently the sixth most destructive fire in California history, Shanley said. As it has grown to cover more than 202,000 acres, 1,077 homes, 22 commercial structures and 500 other buildings have burned.

Three personnel assisting in the firefighting effort have been killed by the fire, which started on July 23, Shanley confirmed to NPR. Cal Fire explained the cause of fire as "mechanical failure of a vehicle."

A bit of happy news reported over the weekend involved a betta fish, a little girl and a handful of firefighters who went above and beyond the call of duty.

After a father informed his daughter that her fish was likely dead, both were in for quite a shock when they returned home to a well-fed fish! Thanks CAL FIRE Engine 1489 & Corning Police Dept. for ensuring Grant was fed while his owners were evacuated due to the #CarrFire pic.twitter.com/Ole8DoJnpf

Per a Cal Fire tweet: "After a father informed his daughter that her fish was likely dead, both were in for quite a shock when they returned home to a well-fed fish! Thanks CAL FIRE Engine 1489 & Corning Police Dept. for ensuring Grant was fed while his owners were evacuated due to the #CarrFire"

Not only had the family's home been spared from the flames but the family pet, a reddish-brown betta fish named Grant, had been kindly looked after in their absence.

"Fed your fish a few sprinkles. Sorry if we weren't supposed to," members of Cal Fire Engine 1489 wrote in a note that the family found upon their return.

It's 'All Gonna Burn': As Holy Fire Rages, Authorities Find A Human Suspect

Forrest Gordon Clark, 51, has been charged with arson, accused of starting the fire in Orange County's Holy Jim Canyon on Aug. 6.

Clark had his arraignment postponed until Aug. 17, after making a bizarre appearance in a Santa Ana court on Friday.

In a video of the hearing, Clark can be seen making several outbursts and calling the charges against him "lies."

His bail has been set at $1 million dollars. If he is found guilty, he could face life in prison.

After a month of burning, the Ferguson Fire has singed 96,457 acres across three national forests and private land. It is 86 percent contained, with full containment expected on Wednesday.

The vast majority of the fire — 65,460 acres — has torn through the Sierra National Forest, making it the largest fire in the forest's history, U.S. Forest spokesman for the Ferguson Fire Tom Efird told NPR.

On Monday, Yosemite National Park officials announced the reopening of Wawona Road and Mariposa Grove to visitors. Yosemite Valley is expected to open on Tuesday.

"We may be almost close to containment but there's still a lot of work that needs to be done," Efird said.

The next phase for firefighters, he explained, is preparing to "reduce erosion when the winter rains come."