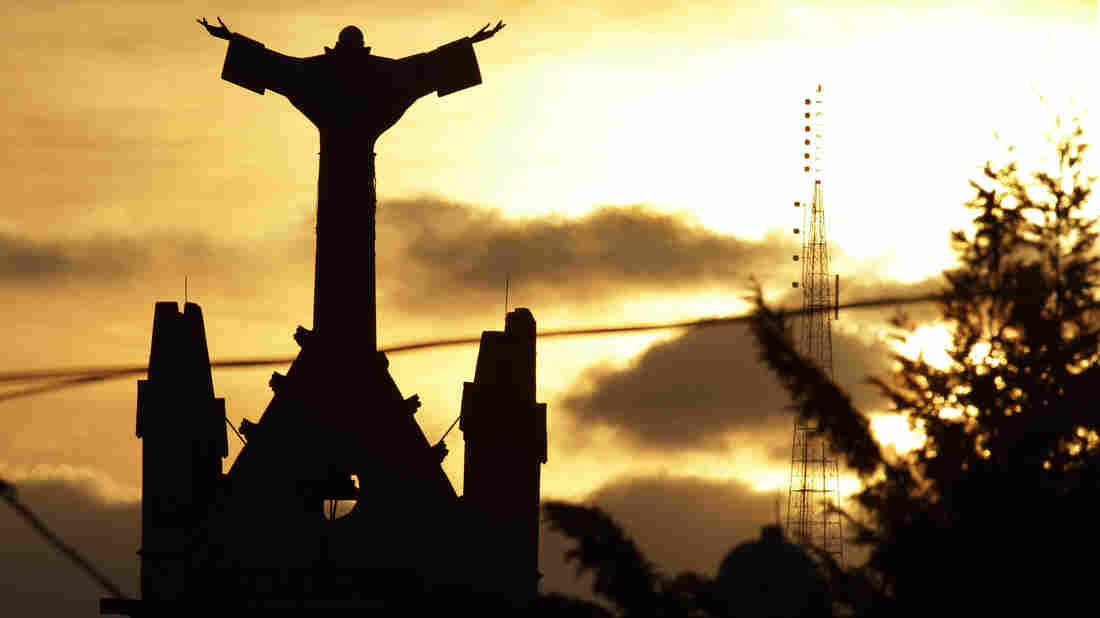 The sun sets behind a church in the Pittsburgh Diocese, one of six dioceses mentioned in the massive report on sexual abuse among Pennsylvania clergy. Gene J. Puskar/AP hide caption 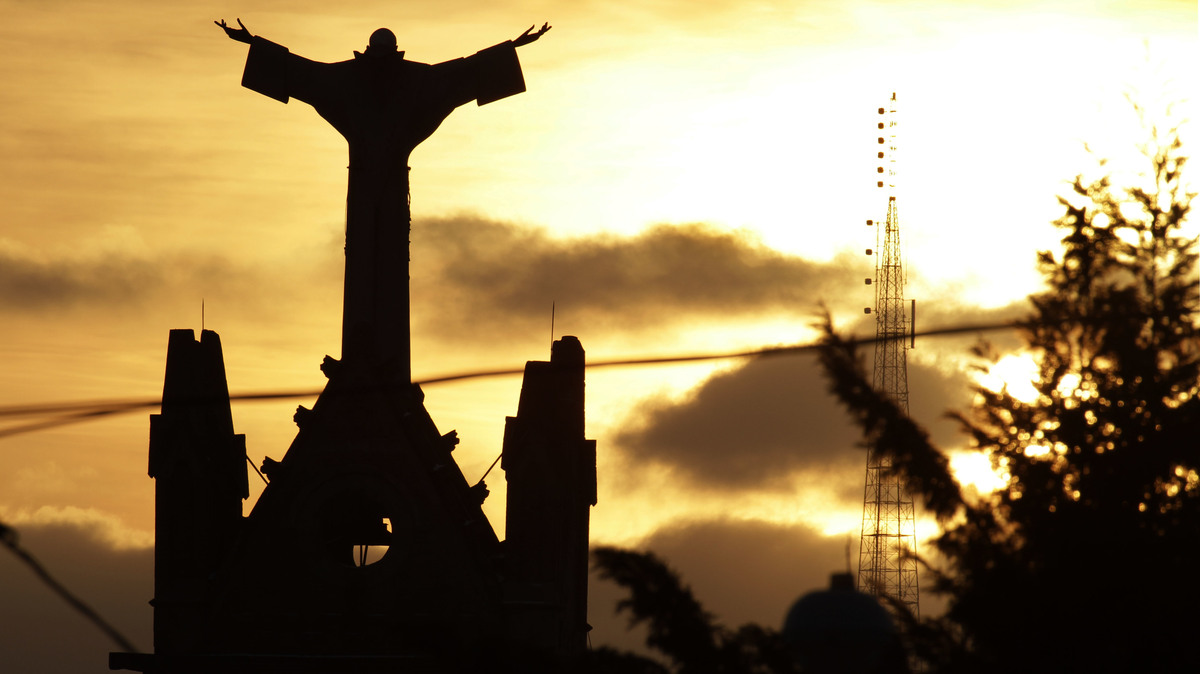 The sun sets behind a church in the Pittsburgh Diocese, one of six dioceses mentioned in the massive report on sexual abuse among Pennsylvania clergy.

A long-awaited grand jury investigation into clergy sexual abuse in Pennsylvania was released Tuesday in an interim redacted form. The report detailed decades of alleged misconduct and cover-ups in six of the state's eight Roman Catholic dioceses.

The roughly 900-page report, not including exhibits, is thought to be the most comprehensive of its kind and paints a horrid portrait of activity that occurred in the dioceses of Scranton, Allentown, Harrisburg, Greensburg, Erie and Pittsburgh, implicating 300 "predator priests" statewide who committed "criminal and/or morally reprehensible conduct."

A priest in the Diocese of Erie admitted to assaulting at least a dozen boys, yet was later thanked by the bishop for "all that you have done for God's people."

The grand jury said it reviewed a half-million pages of internal church documents and "secret archives" that were readily available to bishops. It found credible allegations by more than 1,000 victims, but it added, "We believe that the real number ... is in the thousands."

The findings revealed a pattern of abuse that occurred in hundreds of parishes in 54 of Pennsylvania's 67 counties going back at least 80 years. It detailed how fellow clergy members conducted shoddy investigations into sexual abuse allegations and how bishops often sided with abusive priests.

"The pattern was abuse, deny and cover up," said state Attorney General Josh Shapiro at a press conference in Harrisburg on Tuesday. He described a "systematic cover-up" and a "failure of law enforcement."

The at-times-scathing report described a pattern of abuse that has never been seen "on this scale."

"Despite some institutional reform, individual leaders of the church have largely escaped public accountability. Priests were raping little boys and girls, and the men of God who were responsible for them not only did nothing; they hid it all. For decades. Monsignors, auxiliary bishops, bishops, archbishops, cardinals have mostly been protected; many, including some named in this report, have been promoted. Until that changes, we think it is too early to close the book on the Catholic Church sex scandal."

The report counted 41 "predator priests" in the Diocese of Erie, 37 in Allentown, 20 in Greensburg, 45 in Harrisburg, 99 in Pittsburgh, and 59 in Scranton.

We, the members of this grand jury, need you to hear this. We know some of you have heard some of it before. There have been other reports about child sex abuse within the Catholic Church. But never on this scale. For many of us, those earlier stories happened someplace else, someplace away. Now we know the truth: it happened everywhere.

Abuse in the Philadelphia and Altoona-Johnstown dioceses have been covered in previous reports.

The report noted that the state was not immune from the global sex abuse scandal in the church, saying, "For many of us, those earlier stories happened someplace else, someplace away. Now we know the truth: it happened everywhere."

The interim report was released just before the 2 p.m. deadline the state Supreme Court gave its appointed special master to sort out disputes regarding the redactions.

A majority of the activity described within the scathing investigation falls outside of Pennsylvania's statute of limitations for sexual crimes, and those clergy members both named and currently blacked out of the report are not expected to face criminal charges.

But the grand jury issued presentments against a priest in the Greensburg Diocese and a priest in the Erie Diocese, who it said had sexually assaulted children within the past decade.

In the wake of Shapiro's press conference, several of the diocese released statements.

"Sadly, abuse still is part of the society in which we live. We acknowledge our past failures, and we are determined to do what is necessary to protect the innocent, now and in the future," wrote Allentown Diocese Bishop Alfred A. Schlert.

Named prominently in the report is Cardinal Donald Wuerl, the archbishop of Washington, D.C., who served as the bishop of Pittsburgh from 1988 through 2006.

The grand jury found that Wuerl allegedly shuffled around abusive priests and failed to inform church officials in other states of priests who were moved there after facing sexual abuse allegations in the Pittsburgh Diocese.

Cardinal Donald Wuerl, archbishop of Washington, previously served as the bishop of Pittsburgh, where, according to the grand jury report, he moved around abusive priests and failed to report abuse allegations. Jose Luis Magana/AP hide caption 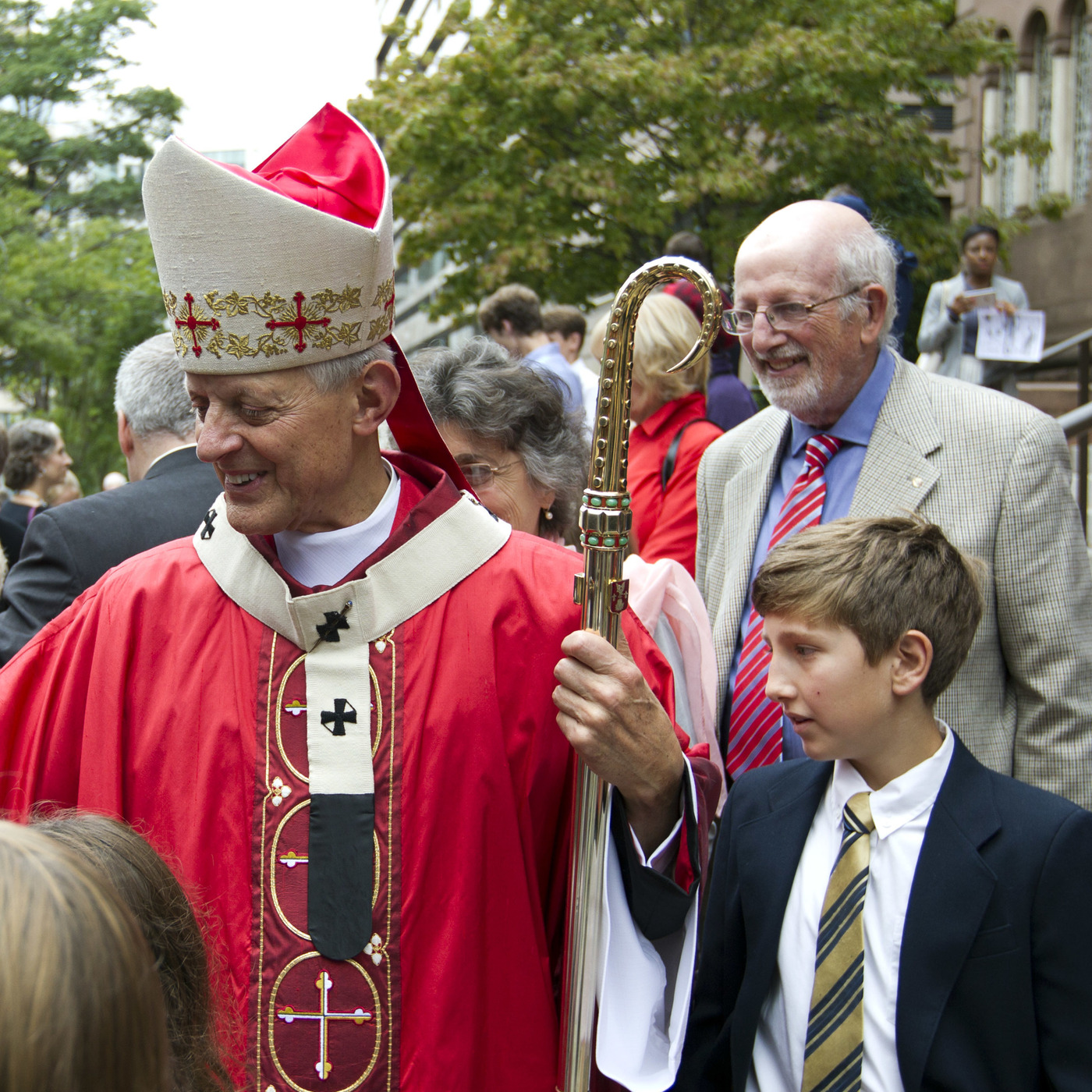 Cardinal Donald Wuerl, archbishop of Washington, previously served as the bishop of Pittsburgh, where, according to the grand jury report, he moved around abusive priests and failed to report abuse allegations.

In a letter to priests late Monday, Wuerl said he acted to protect children after learning about allegations of sexual abuse.

"It moved me not simply to address these acts, but to be fully engaged, to meet with survivors and their families, and to do what I could to bring them comfort and try to begin a process for healing," Wuerl wrote, saying he imposed a "zero tolerance" policy for clergy sex abuse.

When Wuerl came to Pittsburgh, he replaced then-Bishop Anthony Bevilacqua, who went on to become Archbishop of Philadelphia, where another grand jury said he had protected abusive priests. Bevilacqua died in 2012.

In this interim report, the grand jury made a list of recommendations, including eliminating the statute of limitations for child sexual abuse. It also called for a "civil window" law, which would give victims a two-year period to file civil charges retroactively.

"We saw these victims; they are marked for life. Many of them wind up addicted, or impaired, or dead before their time," wrote the grand jury.

We saw these victims; they are marked for life. Many of them wind up addicted, or impaired, or dead before their time.

In Pennsylvania, a victim of child sex abuse who turned 18 after Aug. 27, 2002, has until age 50 to file criminal charges. Those who turned 18 before that date can no longer bring a criminal case. For civil charges, child victims have until their 30th birthday to file, no matter when the abuse occurred.

Advocates for victims have long pushed to amend these statutes. They want to raise the age for civil filings and to abolish limitations on criminal charges, likening sexual abuse to murder.

They've also called for "window" legislation that would give victims a brief period to file civil charges retroactively.

Facing stiff opposition from groups such as the Pennsylvania Catholic Conference, pieces of legislation advancing such measures haven't found consensus.

The 40th Statewide Investigating Grand Jury was convened in 2016 in an investigation led by the Pennsylvania attorney general. Tuesday's redacted report came after months of legal battles challenging its release.

It was initially slated for public view at the end of June but was delayed after a group of unnamed current and former clergy filed objections claiming that publishing the report would violate their due process rights.

Attorneys for the clergy said the state should not be able to name or implicate individuals without charging them with a crime or allowing them to challenge evidence and cross-examine witnesses. As is typical in grand jury proceedings, the clergy members had been invited to file a written response to the report.

In response to objections from clergy, the state Supreme Court stayed the report's release to allow more time for appeals.

Nine news outlets — including NPR member station WHYY, the lead station of Keystone Crossroads — and the state attorney general's office then pushed to make the report public, even if only in a redacted form. 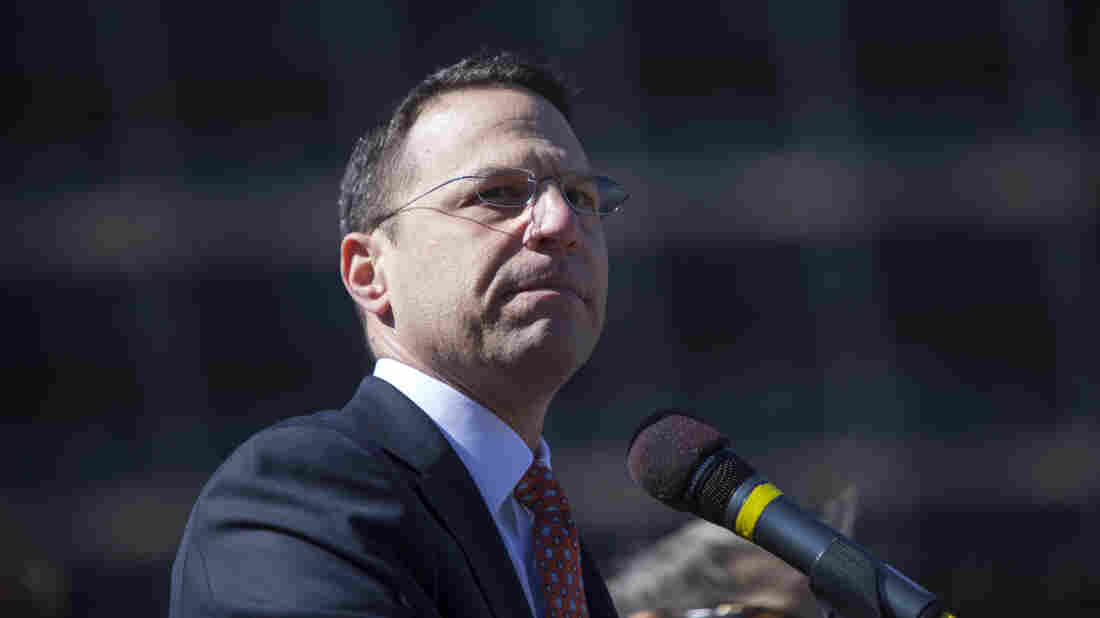 "The pattern was abuse, deny and cover up," said Attorney General Josh Shapiro at a press conference in Harrisburg on Tuesday. Jessica Kourkounis/Getty Images hide caption 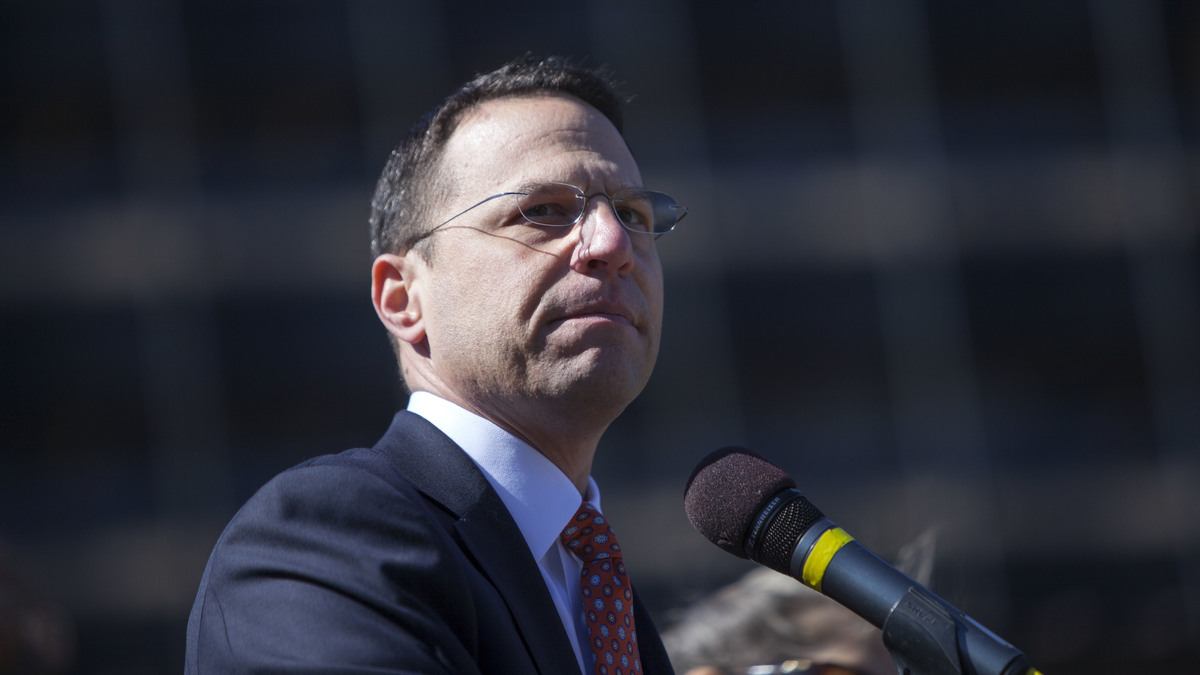 "The pattern was abuse, deny and cover up," said Attorney General Josh Shapiro at a press conference in Harrisburg on Tuesday.

Shapiro called the clergy's appeals a "desperate attempt to stop the public from learning the truth about their abhorrent conduct" and said he opposes giving clergy the option to essentially rewrite the report "in accordance with their preferred view of the facts."

Norman Krumenacker III, the Cambria County judge who presided over the grand jury investigation, also disagreed with the clergy and pushed for an unredacted report to be released.

The Pennsylvania Supreme Court said Krumenacker's logic was flawed. It argued that the state constitution compels the court to put a high premium on an individual's right to reputation. In a July 27 order, the high court agreed with an alternate plan proposed by the media intervenors and decided a version that redacted the names of the objectors would be released by mid-August.

Priests were raping little boys and girls, and the men of God who were responsible for them not only did nothing; they hid it all.

Hearings to decide whether the complaints by individual clergy members are valid will be held in September in Philadelphia.

The group of unnamed challengers said even a redacted version would violate grand jury secrecy rules, because it includes specific facts from the report and "would impermissibly lift the cloak of anonymity they have been afforded."

The legal battle has sparked a debate over Pennsylvania's use of grand jury proceedings, in which 23 jurors meet in private to sort through potential evidence on complicated crimes or issues of public importance.

Prosecutors say such proceedings can help develop particularly difficult cases and bring to light issues that would otherwise remain hidden. Critics say the process should not be used to identify and criticize individuals who haven't been charged with crimes.

This story was jointly reported by stations WHYY and WITF.