Accessibility links
'His Favorites' Is An Artful Argument For #MeToo — And More Kate Walbert's new novel follows a young woman who goes to a posh boarding school after tragedy upends her life — only to find she's no safer there than she was at home. 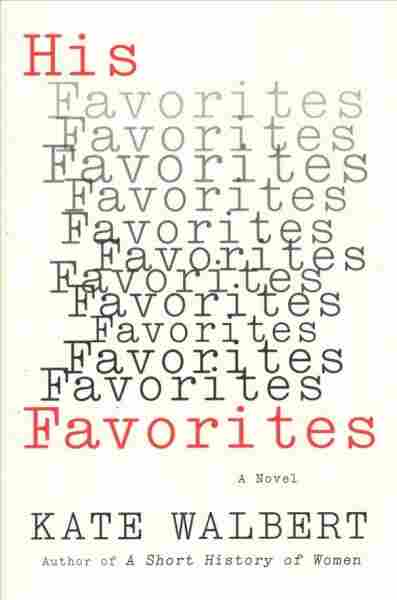 Kate Walbert's most powerful novel yet is a case study in the perversities of power imbalances. This slim but by no means slight novel continues Walbert's explorations of how society's sexual biases and constraints have hampered women, a theme that has driven all six of her books, including A Short History of Women (2009) and her most recent, The Sunken Cathedral (2015). But with a timeliness so acute it feels ripped-from-the-headlines, His Favorites amps up the outrage and packs a punch far greater than its weight class.

Walbert, known for sophisticated, multiply-stranded narratives that span generations, has pared her new novel into a sharp blade. Her narrator, now a grown woman, recounts painful memories of an unwanted sexual relationship with her 34-year-old boarding school teacher when she was 15, and how her attempts to stop him were infuriatingly, condescendingly stymied. The result: "regret, rage, woven into my life with steel thread."

With Jo Hadley, Walbert has created a consummately credible character, convincing as both a bright, vulnerable, traumatized yet un-self-pitying teenager and a sympathetic, clear-eyed but bruised adult. In a novel about girls who aren't given credence, who are told they're being dramatic, who are told, "Make big waves and you'll swamp your own boat," an utterly reliable narrator is key.

Jo's story begins, as it must, with the event that derailed her life: a drunken joyride in a stolen golf cart with her two best friends, which ends tragically. Afterwards, Jo is sent to the only boarding school that will consider her; her mother moves to the West Coast and remarries, "forswearing liquor, pot, and meat in short order." Her father is simply absent; among other things, this novel flags adults — parents, teachers, administrators — who abnegate their responsibilities toward children they should be protecting.

Coping With Calamity In Shimmering 'Cathedral'

Walbert captures a quintessential, privileged New England boarding school with a few well chosen details, such as "close-shorn playing fields" and buildings named after alumni, resulting in a campus "as crowded with the dead as with the living." Sexual predation aside, her portrait, complete with tacitly condoned, humiliating panty raids and a nasty, blindfolded hazing — part A Separate Peace, part Lord of the Flies -- is unlikely to boost prep school applications.

The novel is similarly on point about "Master Aikens," the handsome, popular teacher students call Master or just M. The guy is a perpetual juvenile, with his faded Princeton T-shirt, Alfa Romeo, and lewd classroom jokes that ridicule "the smart girls" and their anatomy. He summons students to his disheveled apartment for conferences, calling to them from his office in the back, "Next victim ... Straight back ... Don't look at the mess!" Soon, he is tucking insidious letters among the stuffed animals on Jo's bed: "I know I can trust you, he wrote. I think of you all day, he wrote. I wonder how you taste, he wrote. Secret-keeper, he wrote."

Walbert heightens the suspense by cutting back and forth in time, as Jo puts off the most difficult parts of her story. She toggles between her hometown accident, Master's transgressions, an encounter with another of his scarred favorites in New York years later, and the cruel bullying incident that causes her terrified, unpopular roommate to leave school abruptly. (This sadistic escapade showcases another form of powerlessness, and raises an additional moral quandary for Walbert's narrator.)

Walbert's novel is fueled by gorgeous writing as well as moral outrage.

Jo is a savvy raconteur who recognizes that there are many ways to frame a story, from different perspectives. She deliberately chooses to wield some of the literary tools she learned in Master's Advanced Lit class. "Understand the beauty of a declarative sentence," he instructed, and does she ever – a direct line to truth. She ironically recalls his injunctions against the subjunctive — "To write in the subjunctive mood is to write out of reality in a cloud of wishes, in a haze of emotion." This is a student who lost so much, yet on whom nothing was lost.

Walbert's novel is fueled by gorgeous writing as well as moral outrage. It's an artful argument for the importance of the long overdue #MeToo movement, but it's more than that. At one point, Jo interrupts her narrative; she wishes she could stop or rewind time "so that none of the rest of it ever happened, like when a film gets stuck in a projector, the images consumed, distorted, vanished." Of course she can't. She continues: "But the story bends. From here there is never ... a day without Master's shadow across my life — a solid bar, a locked turnstile that brings me up short, trapped on the other side of where I thought I was going, the place I once imagined I would be."

His Favorites is heartbreaking and galvanizing.