Accessibility links
A Day At The Beach Won't Be The Same After 'The World In A Grain' Journalist Vince Beiser's no-nonsense writing makes light reading of a grim subject, the past and future of sand, but it paints a telling picture of how great a problem lies before us. 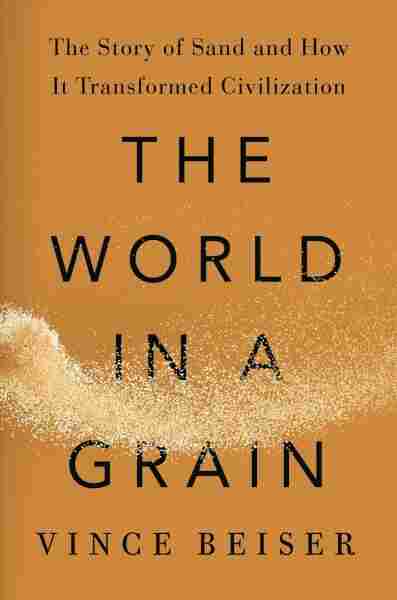 The World in a Grain

The Story of Sand and How It Transformed Civilization

The first time you see 'sand piracy,' it might sound surreal — a misguided Pixar villain whose lackeys race down the beach with empty buckets and sinister intent, doomed to fail in the face of a resource that spans the whole ocean.

Then you find out about someone stealing 1,300 feet of sand from a beach in Jamaica, or the many sand miners whose dredgers suck sand from the ocean floor by the ton and, suddenly, it doesn't sound as funny — or as impossible — as it did before.

In The World in a Grain: The Story of Sand and How it Transformed Civilization, journalist Vince Beiser peppers research with first-person interviews in an engaging and nuanced introduction to the ways sand has shaped the world, and how globalization — both its possibility and its greed — has turned it into one of the most important and most controversial substances on the planet.

Sand (particularly in quartz or water) is a critical component of modern life: concrete for the building you're standing in, roads for how you got there, glass and microchips for the screen you're reading this on, fiber-optic cable for the network that sent it.

But this is hardly new; Beiser's brief history of sand seems designed to make you think about the difficult symbiosis of growth and consumption that creates modern convenience. The numbers can be stunning — as can the ways success came at the expense of sustainable practices in nature, and those whose jobs vanished in its wake. Take the bottle company that automated its glassblowing process in 1903, a tactic an industry magazine praised because it "eliminates all skill and labor" — and a tactic so efficient that in just a year, the demand for the silica sand used to make the glass jumped from 1.1 million to 4.4 million tons.

In Beiser's hands, that human and natural cost of industry isn't just an issue of labor or space. It's a significant undercurrent to all his stories of industrial progress, and affects the modern day as much as any piece of technology. The first-person interludes give these moments a welcome immediacy — say, when he tries to get information from a North Carolina quartz-mining company that hoards both land and information about its practices. Eventually, even his dry humor gets buried under the sense that we're hurtling toward something unspeakable.

This comes into sharpest focus whenever he turns to the environmental impacts of sand mining. It's an impossible cost to sustain, and governments worldwide are increasingly being asked to make plans about how to protect their own sand while making sure not to stop the flow of modern conveniences. For this, Beiser steps away from a slightly America-centric history to track sand worldwide, following sales routes, interviewing farmers about fracking, discussing Dubai islands being built atop protected coral reefs, or driving through landscaped deserts in China. He insists on a certain pragmatic understanding that we can't un-build our cement, but there's also a sense of genuine alarm. No wonder that when Beiser looks at sand-chewing highway systems that encourage vehicles, the sand-chewing fracking mines that try to extract fuel to power those vehicles, and lenient or corrupt government officials unwilling to enforce regulations, he just sees "sand abetting sand abetting sand."

It might be strange to think the seemingly endless thing that coats the seas is a fragile resource at a crisis point. Yet in The World in a Grain, the numbers are staggering, the methods are eyebrow-raising, and the implications are dire.

Beiser's no-nonsense writing makes light reading of a grim subject, but it paints a telling picture of how great a problem lies before us. It's a topic that begs for deep consideration on a global scale; in the meantime, you'll never look at a beach the same way again.