Accessibility links
Italy: Genoa's Ponte Morandi Highway Bridge Partially Collapses A section of the Ponte Morandi Bridge in Genoa collapsed on Tuesday, sending cars and trucks that had been driving on the A10 motorway crashing down below. 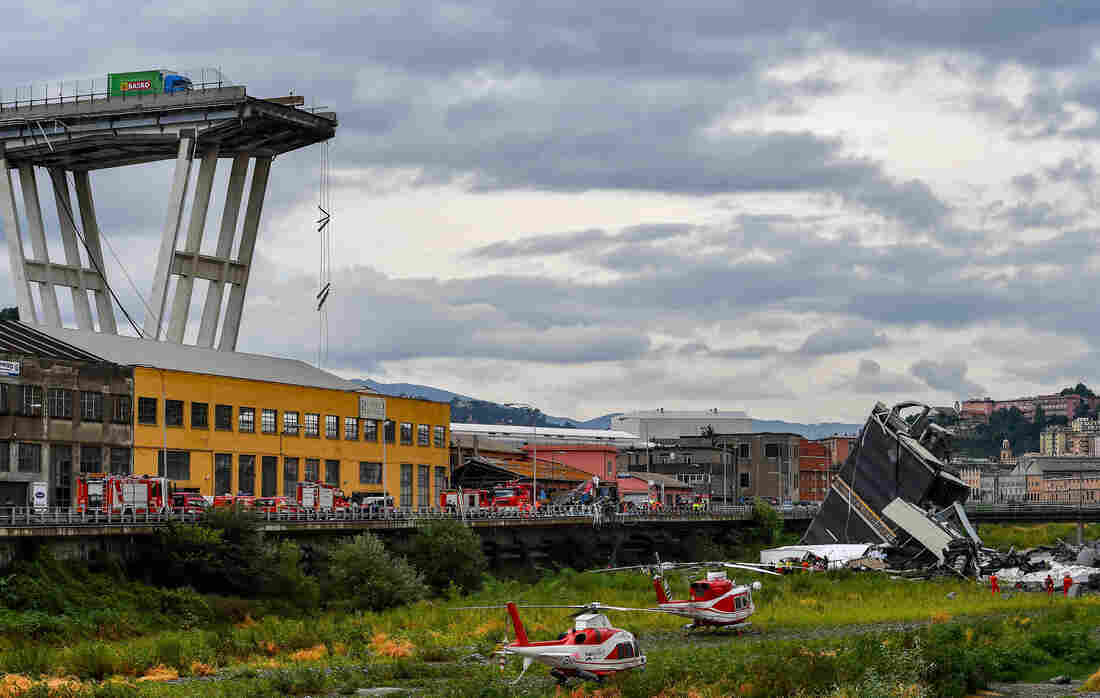 Rescue crews work at the scene of a bridge that collapsed Genoa, Italy, on Tuesday. Dozens of people are feared dead, after a large section of the Morandi Bridge, built in the 1960s, suddenly collapsed during a fierce rainstorm. Paolo Rattini/Getty Images hide caption 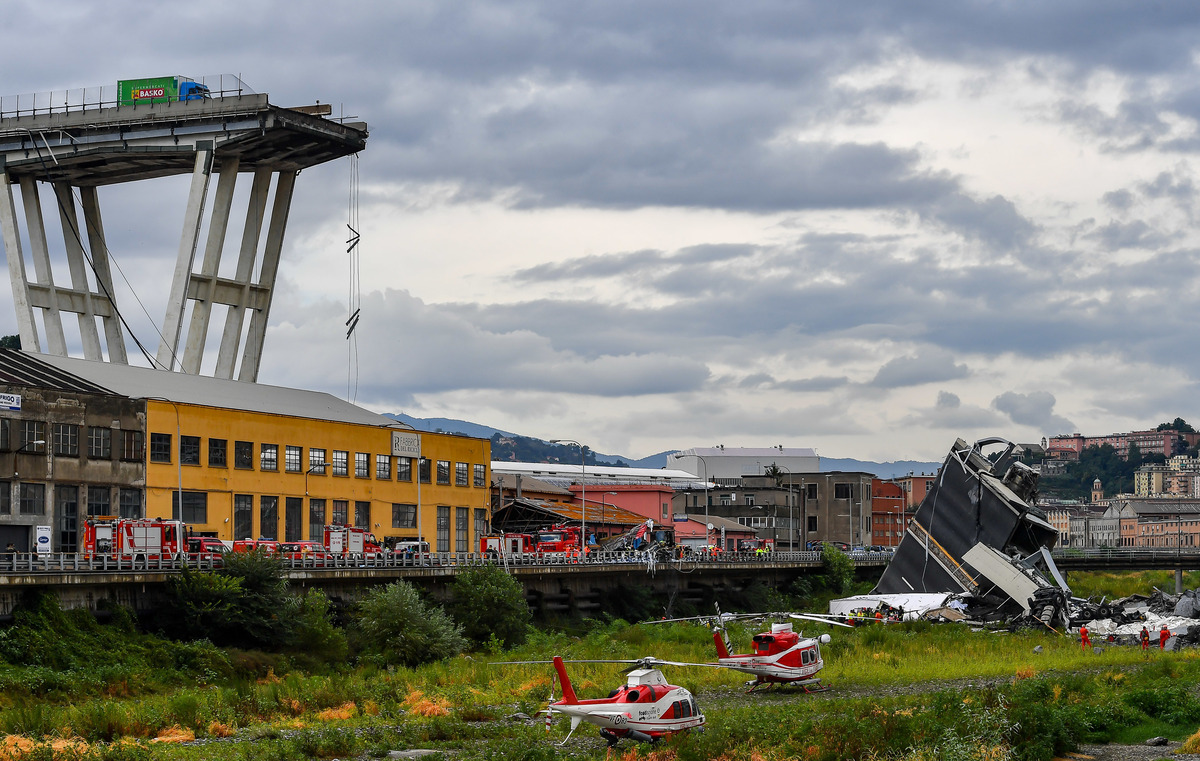 Rescue crews work at the scene of a bridge that collapsed Genoa, Italy, on Tuesday. Dozens of people are feared dead, after a large section of the Morandi Bridge, built in the 1960s, suddenly collapsed during a fierce rainstorm.

Updated at 5 a.m. ET on Wednesday

A long section of the towering Ponte Morandi Bridge completely collapsed in Genoa, Italy, on Tuesday, sending cars and trucks on the A10 highway crashing down below. Dozens of people died in the bridge failure, officials say.

Workers have found bodies and vehicles in the massive amount of wreckage left by the collapse — and at least 11 people have been pulled from the rubble alive, Italian media report.

Prime Minister Giuseppe Conte and other leaders inspected the site late Tuesday afternoon, as a teams of more than 300 firefighters and hundreds of other rescue workers scoured the scene, looking for anyone who may have survived.

"The more I think about the deaths of Genoa, the more I get angry," Interior Minister Matteo Salvini said in a tweet. Promising to find out who is responsible for the tragedy, he said they would pay dearly.

More than 30 cars and several heavy trucks were likely on the bridge when it collapsed, according to ANSA. reported, "Both carriageways have crashed to the ground for about 100 meters [328 feet]."

Italian State Police released a video shot by a witness that shows a massive pillar crumbling as it falls over. The man yells in disbelief, "Oh Dio!" as he watches the bridge continue to collapse.

"The collapse of Ponte Morandi is an immense tragedy for our city," Genoa Mayor Marco Bucci said. While noting the challenge the catastrophe will pose, he called on Genoa's residents to respond "with force and pride."

The disaster struck shortly before noon, when one of the bridge's central pillars collapsed during a violent rainstorm. A witness told ANSA that lightning had struck the bridge before the collapse.

"The Morandi Bridge gave way over a riverbed and railway tracks in a densely inhabited area," NPR's Sylvia Poggioli reports. "The bridge is a viaduct that runs over shopping centers, factories, some homes, the Genoa-Milan railway line and the Polcevera river."

Rescue and emergency workers are now going through piles of concrete, steel cables and other debris. And they've asked people who live near the collapse to leave their homes and workplaces, fearful that more sections of the bridge might be at risk of collapse.

The national firefighter corps, Vigili del Fuoco, says it has more than 200 workers searching the area beneath the collapsed bridge. They're pulling concrete away and using saws to cut through a tangle of cables and wires, hoping to find pockets within the wreckage that may have helped people survive. The agency also says crews are using dogs to search for survivors.

The bridge was built in the late 1960s, at a length of more than 3,600 feet. It had recently been the subject of renovation and repair efforts. Italian roadway company Autostrade says the most recent work included consolidating the viaduct's base — a project that included installing a bridge crane.

Autostrade says an in-depth analysis will be carried out to determine what caused the collapse.

The fire corps posted an image taken from below the collapsed span, showing a truck stopped just feet from where the bridge trails off into the open air.

ANSA says that at least part of the span fell onto a warehouse.