Accessibility links
'Flights' Is A Trip, If You Like Wandering Off The Edges Of The Map Polish author Olga Tokarczuk's new collection is a cabinet of curiosities — surreal, loosely connected stories about the human body, about movement, about two-headed calves and saints' relics. 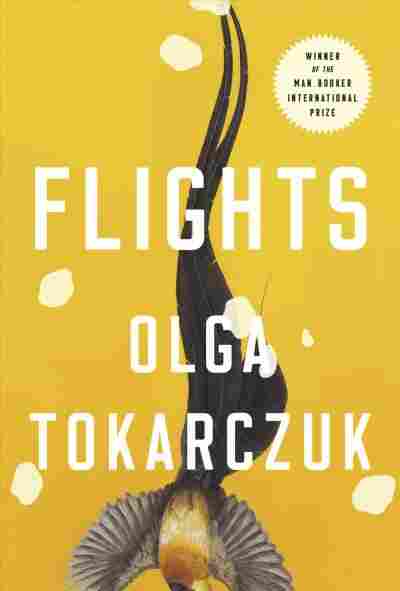 When I began reviewing books and movies many years ago, I recall the editor at the magazine where I freelanced telling me that the rule of thumb was not to say too much about any given title. This was long before reviews appeared with the word "spoilers" at the top; the age of ink on paper.

I do not necessarily subscribe to the mantra of no spoilers — how else are you supposed to perform a critical analysis of certain texts? — but in the case of Olga Tokarczuk's Flights, translated by Jennifer Croft, the hard part is coming up with any spoilers. In an era in which many books are summarized as X meets Y (Game of Thrones meets The Cat in the Hat!), it is rare to be genuinely baffled by a description. Yet Flights manages to baffle, to make you scratch your head and try to find the proper words for it.

The obvious summary would be that Flights is not a novel, but a series of loosely interconnected stories about the human body and movement. But even that seems inadequate; several of the stories are mere stubs, and their connections are loose and liquid. Flights functions more like a cabinet of curiosities, the kind which served as a precursor to natural history museums. Within drawers of different sizes, curious onlookers might find animal and botanical specimens, minerals, and man-made objects.

In Haunted 'Florida,' The Storms And Panthers Are Always There. How Will You Survive?

Flights is like opening drawer after drawer and discovering similar treasures. Here is the story of a man whose wife and child disappear while on vacation, the musings of a doctor who is fascinated by the preservation of human organs, and a series of letters from the distraught daughter of an African courtier who has been embalmed and put on display. But most of the episodes in Flights are more fragmentary, speckled with philosophical ruminations.

Aside from the frequent focus on bodies (an amputated limb, a heart transported for a proper burial, a tattoo on an arm) and on travel (maps, journeys, airports, roads and boats), there is also a coolness to these episodes. Reading them feels like perpetually gazing at the world through a telescope. Many of Tokarczuk's characters seem to have trouble feeling and connecting with others, and the fragmentary nature of the novel's episodes seems to mirror the isolated nature of the people whose lives she dissects.

'Flights' functions ... like a cabinet of curiosities, the kind which served as a precursor to natural history museums.

A cabinet of curiosities could contain quite an eclectic, messy collection. There is nothing that naturally ties an ancient clay sculpture to a two-headed calf, and yet they might be placed side by side. Similarly, the people in Flights do not share connections; they often co-exist only because they have ventured into the same physical space — a museum, an airport — and will part with ease.

There is also a sense of the odd, of the surreal, right around the corner. Some of it comes from the topics Tokarczuk discusses — have you ever spent any time considering the physical remains of saints exhibited in churches? — but the characters are equally strange, creatures who might feel at home in a David Lynch movie.

Attempting to read this book all at once will result in a headache, like stuffing a box of chocolates into your mouth. Consuming it at a more leisurely pace is the trick. It's a journey without a destination, and this will naturally frustrate the reader who demands Story, who adores linearity. But for those who like traveling beyond the edges of the map, Flights could do the trick.