Accessibility links
Kavanaugh Fight Puts Vulnerable Senators In A Tight Spot The president's Supreme Court pick meets Wednesday with Democratic Sens. Joe Donnelly and Heidi Heitkamp, who are both up for re-election in red states while under intense pressure from activists. 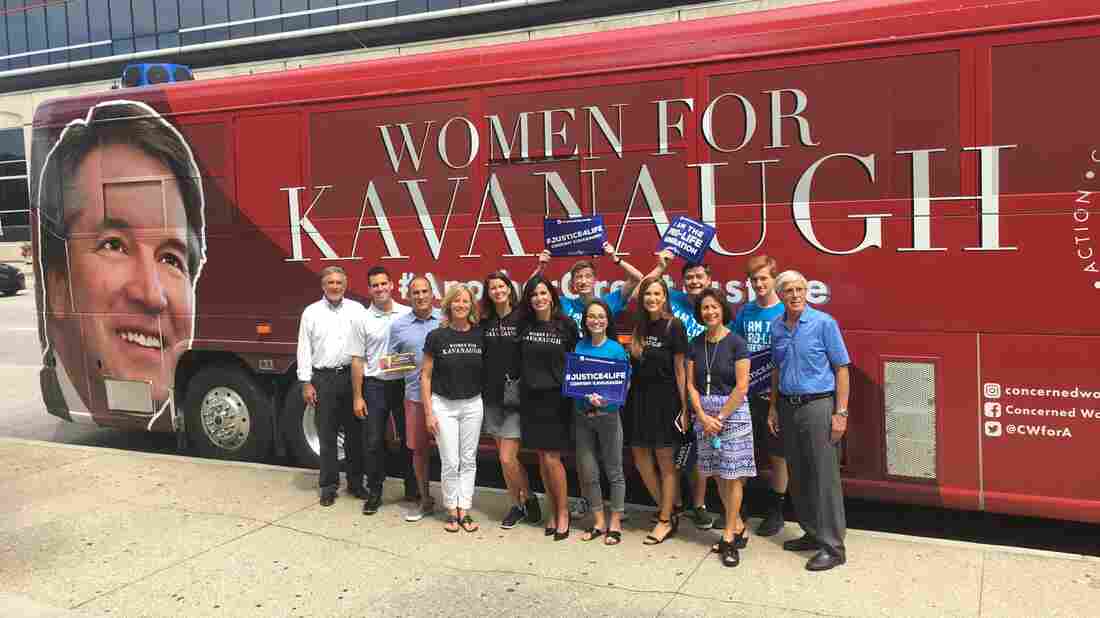 Activists from Concerned Women for America make a stop on their bus tour in Indianapolis, where Democratic Sen. Joe Donnelly is facing pressure from the right as he prepares to vote on the Supreme Court nomination of Judge Brett Kavanaugh just weeks before Election Day. Sarah McCammon/NPR hide caption 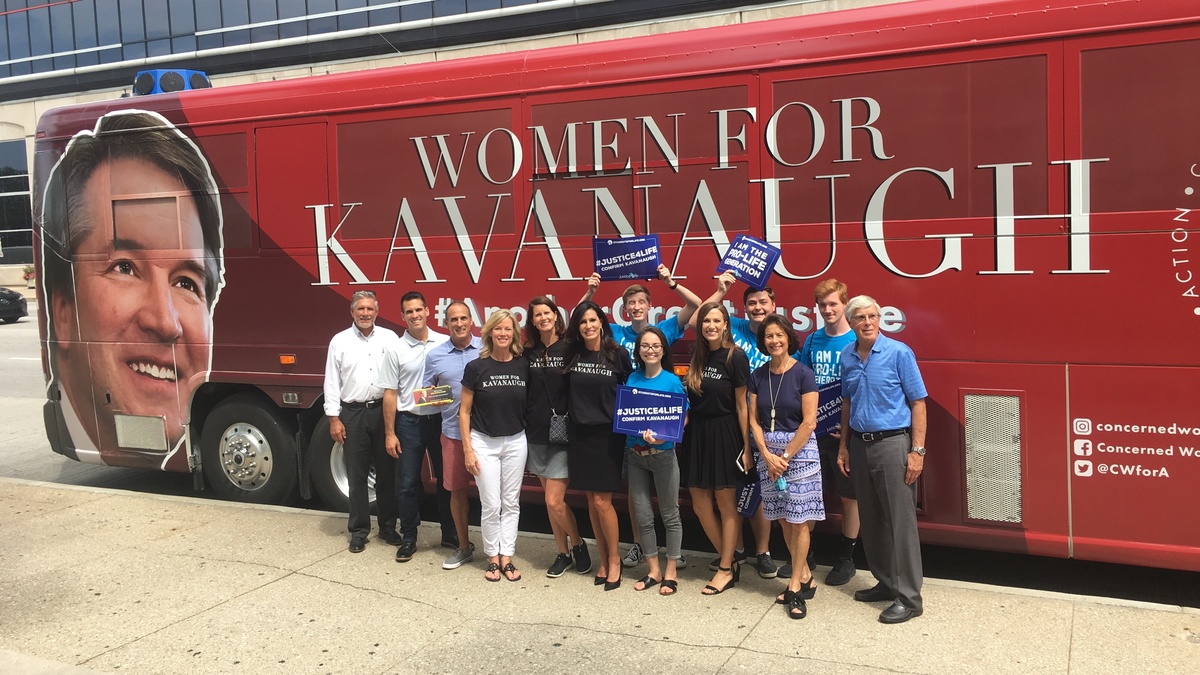 Activists from Concerned Women for America make a stop on their bus tour in Indianapolis, where Democratic Sen. Joe Donnelly is facing pressure from the right as he prepares to vote on the Supreme Court nomination of Judge Brett Kavanaugh just weeks before Election Day.

It's not every midterm election year that a Supreme Court seat is vacant — much less the court's swing vote — and the senators whose re-election bids could swing control of the U.S. Senate next year are well aware.

Indiana Democratic Sen. Joe Donnelly is running to hold on to his seat in a state President Trump won by nearly 20 points. He and another vulnerable Democrat, Sen. Heidi Heitkamp of North Dakota, are meeting with President Trump's nominee, Judge Brett Kavanaugh, on Wednesday.

Their re-election campaigns are being complicated by the Supreme Court fight, which has brought millions of dollars in ads and activists to their home states, as well as those of other moderate senators trying to save their jobs in November.

On a sunny afternoon last week in Indianapolis, a bus bearing a giant picture of Kavanaugh's face pulled up in front of the state Capitol.

After climbing off the bus, Janae Stracke, national field director with Concerned Women for America, told local activists she wants them to put pressure on Donnelly to support Kavanaugh, whom she calls "the next great justice."

With Kavanaugh's appointment, Stracke said, "President Trump is following through on his word."

Stracke noted that many Republican voters said they were motivated to turn out for Trump in 2016 because of concerns about the balance of the Supreme Court. She wants to send a similar message to their senators ahead of the November election.

"That's why we want to continue to rally support and talk to some of the senators like Sen. Donnelly," Stracke said.

Donnelly voted to confirm President Trump's first Supreme Court nominee, Neil Gorsuch. In a statement, his re-election campaign press secretary Kate Oehl said in part, "He'll take the same meticulous and thoughtful approach that he has taken throughout his career. That includes listening to the opinions of Hoosiers on both sides of the aisle as he thoroughly reviews the record and qualifications of Judge Brett Kavanaugh."

Concerned Women for America is working with local activists like Susie Moore, a volunteer who is asking friends and neighbors to call or write Donnelly's office and ask him to vote in favor of Kavanaugh. Moore said she's opposed to abortion rights and concerned about what she sees as an erosion of religious freedom. She said the well-being of "future generations" is at stake in this fight.

On the other side of the country, Republican Sen. Dean Heller is running for re-election in Nevada, where Hillary Clinton won in 2016. 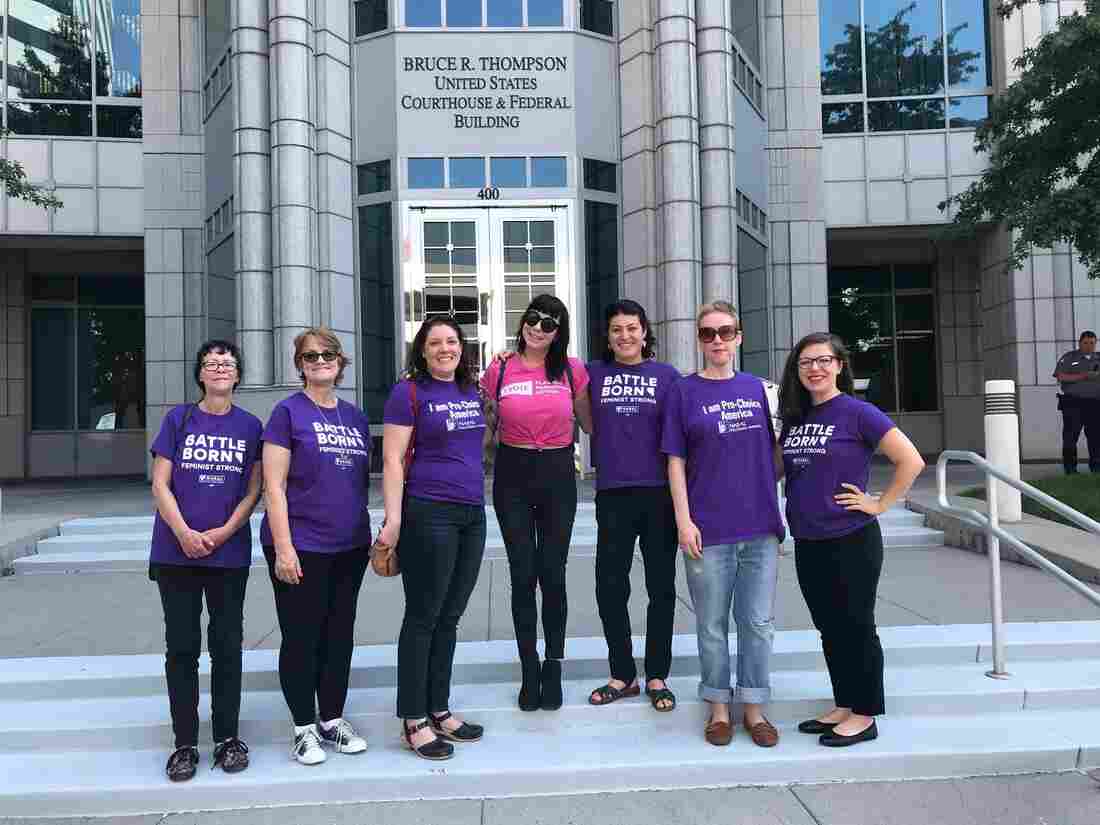 Activists from NARAL Pro-Choice America stand outside the office of GOP Sen. Dean Heller in Reno, Nev. Heller is facing a tough re-election bid in a state that voted for Hillary Clinton in 2016, and activists on the left are putting pressure on him to oppose President Trump's Supreme Court nominee. Sarah McCammon/NPR hide caption 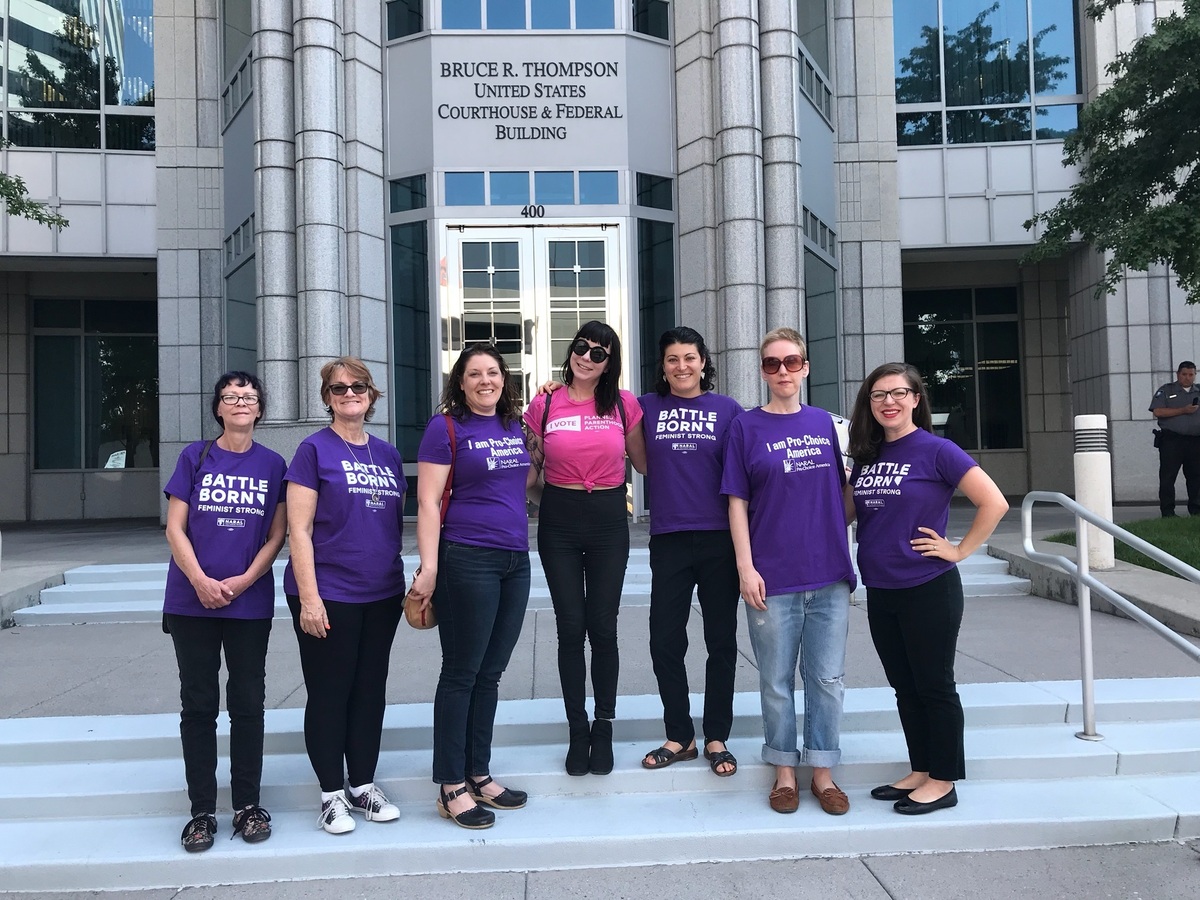 Activists from NARAL Pro-Choice America stand outside the office of GOP Sen. Dean Heller in Reno, Nev. Heller is facing a tough re-election bid in a state that voted for Hillary Clinton in 2016, and activists on the left are putting pressure on him to oppose President Trump's Supreme Court nominee.

As the women gathered around the front desk, Sandy Miller, 54, told a staff member she worries Kavanaugh would vote to roll back abortion rights.

"I am the last year of the baby boomers, and people in my age did this already. We've already fought this [fight] based on what people wanted — what women wanted," Miller said. "And Sen. Heller needs to stand up for us."

Heller communications director Megan Taylor said, "Sen. Heller always appreciates the opportunity to receive input on important policy issues from his constituents, and that's why he spent last week traveling around the state to meet with Nevadans from Reno to Boulder City." She added that Kavanaugh's record shows he's a "well-qualified, mainstream jurist," and therefore Heller has "no reservations about supporting his nomination."

Kavanaugh's opponents are taking a similar message to the airwaves and online in other states, including those with Republican senators considered potentially persuadable, even if they aren't on the ballot this year. Planned Parenthood has a six-figure ad campaign in Maine and Alaska, focused on Republicans Susan Collins and Lisa Murkowski, who've supported abortion rights in the past.

Abortion is a major focus of the fight over Kavanaugh. But other issues are also part of grass-roots lobbying efforts, like letter-writing drives, phone banks and ad campaigns.

Millions are also going into ads to support him.

One of the biggest campaigns, valued at more than $4 million, is being led by the Judicial Crisis Network, with a heavy focus on more conservative states including Indiana that have Democratic senators.

Another big spender is the National Rifle Association, which is behind a seven-figure ad buy in support of Kavanaugh.

The Senate will hold hearings on Kavanaugh's nomination starting Sept. 4, just after the Labor Day holiday as voters' attention starts turning toward the midterms, with a floor vote expected weeks after.