Accessibility links
Genoa Bridge Collapse: Death Toll Rises To 39 As Shock Turns To Anger And Blame Deputy Prime Minister Luigi Di Maio said a private company responsible for maintaining the Ponte Morandi Bridge did not do its job and was responsible for the collapse. 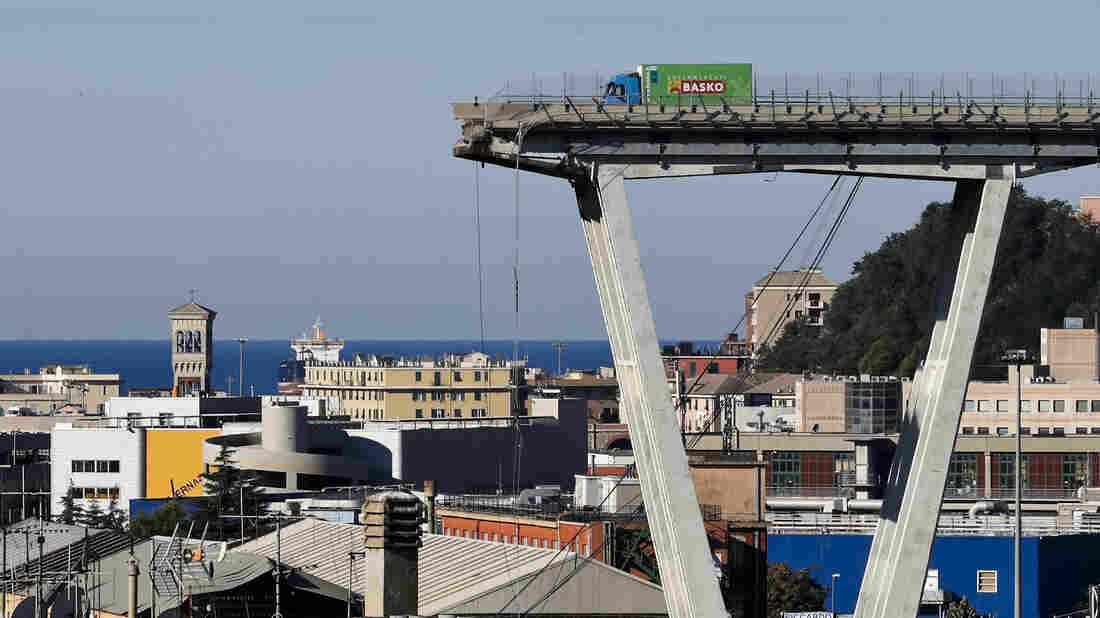 On Wednesday, officials warned that other parts of the collapsed Ponte Morandi Bridge in Genoa, Italy, could give way. Antonio Calanni/AP hide caption 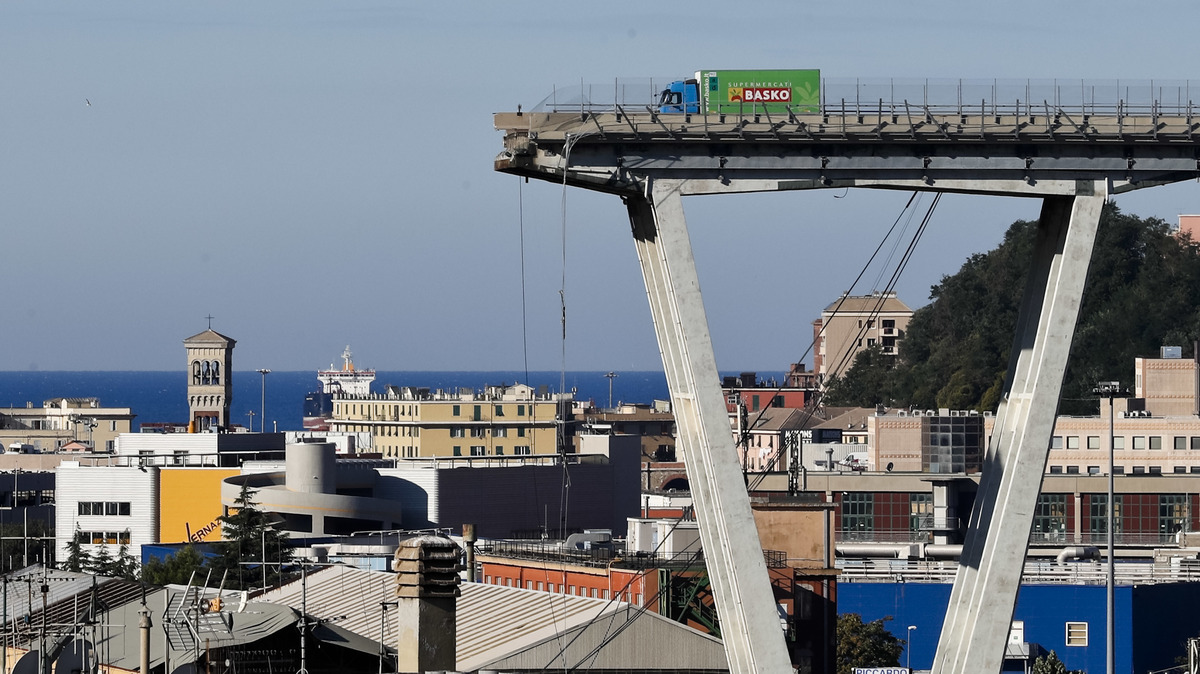 On Wednesday, officials warned that other parts of the collapsed Ponte Morandi Bridge in Genoa, Italy, could give way.

A day after the sudden collapse of a section of highway bridge in Genoa, Italy, shock has given way to anger and blame as the number of people killed, which includes several children, climbs to 39.

Italian political leaders have been quick to point the finger at the private company responsible for maintaining the Ponte Morandi Bridge, which was built in the 1960s. Autostrade operates many of Italy's toll highways, according to The Associated Press.

"Those responsible for the Genoa tragedy have a name and surname, and they are Autostrade per l'Italia," Deputy Prime Minister Luigi Di Maio wrote on Facebook, as translated by Google.

"We have one of the biggest dealers in Europe that tells us that the bridge was safe and there was [no way] to imagine the collapse," Di Maio wrote. "Autostrade had to do the maintenance and did not do it."

Transport minister Danilo Toninelli called on Autostrade's leadership to resign, accusing the company of putting profits ahead of safety. He said he had begun the process of canceling the company's contract and imposing fines of some $170 million.

From 2012 to 2017, "the company's investments in safety, maintenance and upgrading of the network have exceeded 1 billion euros a year," Autostrade said in a statement emailed to NPR. The company added that its safety investments have resulted in fewer deaths and accidents.

Deputy Prime Minister Matteo Salvini said he would work to "identify the culprits of this disaster, which will not go unpunished." He tweeted that those responsible will "pay dearly."

The Public Prosecutor's office in Genoa has opened a criminal inquiry into Tuesday's collapse, with lead prosecutor Francesco Cozzi saying that "human error" is to blame.

Around 35 cars and three trucks were crossing when a portion of the Morandi Bridge gave way, officials said. Vehicles plummeted some 150 feet into an industrial area of the northern maritime city, some landing on a railway line and others hitting a riverbed.

On Wednesday, officials ordered buildings in the vicinity of the bridge to be evacuated, saying there was a risk that other sections could fall.

One of the bridge's central pylons crumbled around noon local time on Tuesday during a violent rainstorm. At least one person told Italy's ANSA news agency that lightning had struck the bridge before the collapse.

"Oh God," a witness can be heard crying out in Italian as footage of the collapse was caught on video.

Rescue crews worked through the night cutting and sifting through tons of concrete and steel in search of survivors and victims. Salvini said Wednesday that the national firefighter corps, Vigili del Fuoco, had extracted the final body after working through the night.

Details have begun to emerge in Italian media about those who died — workers on their way to clock in, vacationing families and foreign tourists. 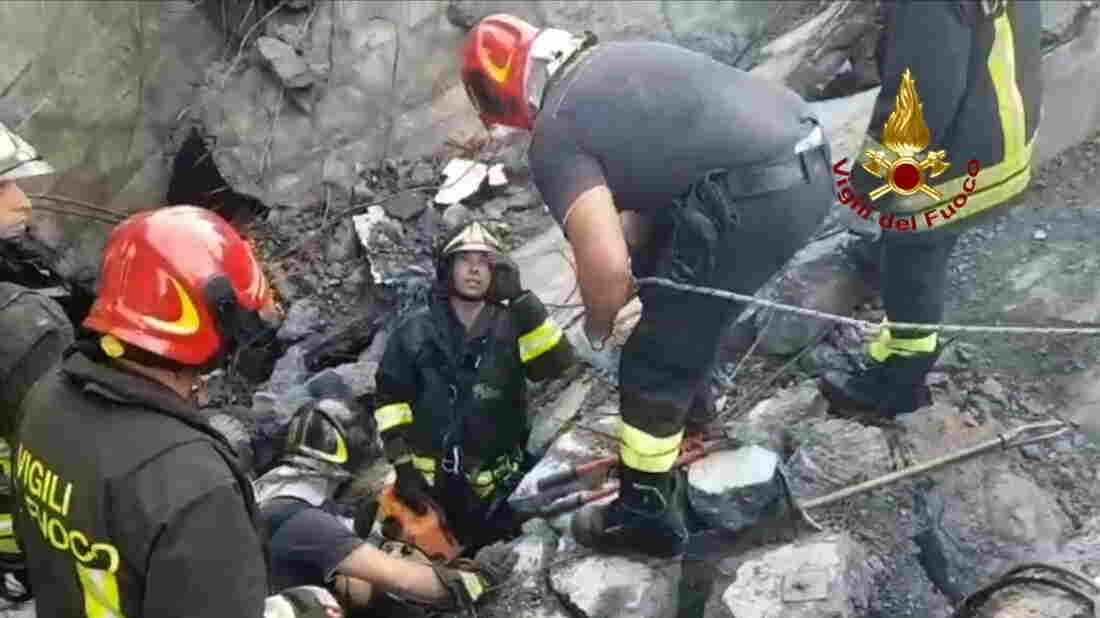 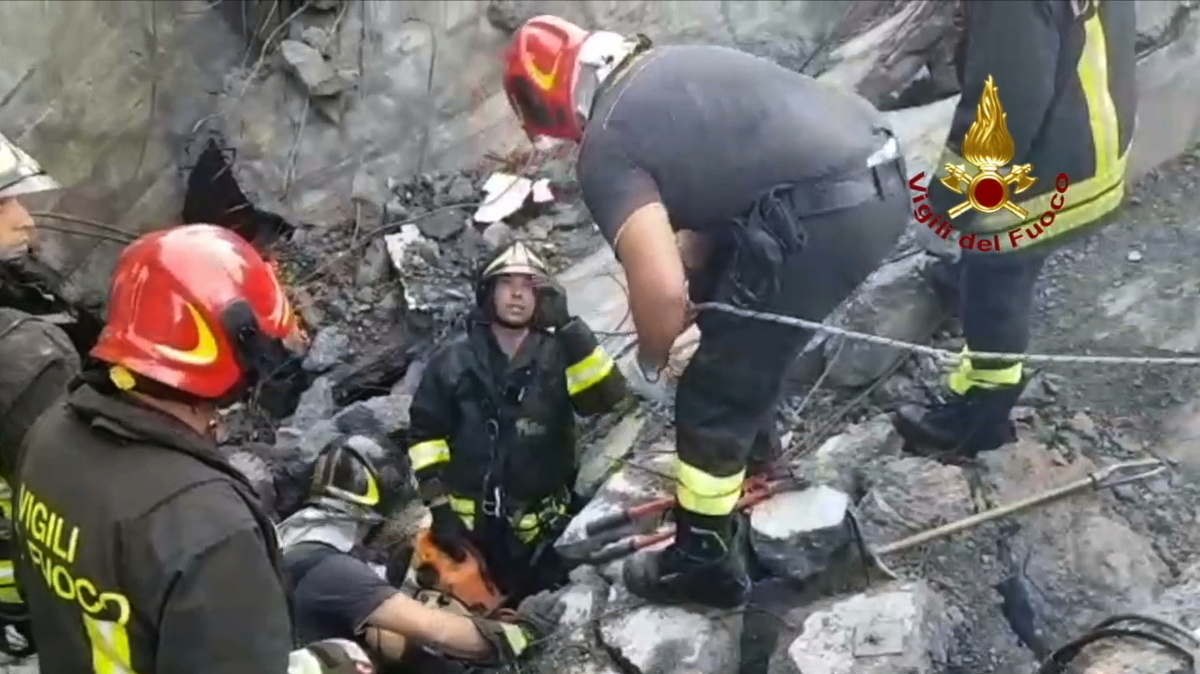 Italian firefighters work at the collapsed Morandi highway bridge in Genoa on Tuesday.

Italian newspaper La Repubblica said the victims included at least two families with children, a Chilean chef and several French tourists in their 20s bound for a ferry ride.

"The collapse of Ponte Morandi is an immense tragedy for our city," Genoa Mayor Marco Bucci said.

Pope Francis offered prayers for all those affected. "I express my spiritual closeness to their families, to the injured, to the displaced, and to all those who suffer as a result of this dramatic event," the pontiff said Wednesday.

Opened in 1967, the bridge is part of the A10 motorway connecting Genoa to France and is named after designer Riccardo Morandi.

But even as officials blamed Autostrade for the disaster, it could take weeks, perhaps months, for the exact cause to be determined.

As NPR's Silvia Poggioli reports from Rome, "The media are filled with speculation on the causes of the collapse, from eyewitness reports of lightning hitting the bridge during the heavy rainstorm just before the collapse, to poor maintenance, to the unforeseen vagaries of fate."

Toninelli, the transport minister, pointed to Italy's aging roads and bridges as he called for the country to invest in its own version of the Marshall Plan to improve infrastructure.