Accessibility links
In Matt Groening's Fantasy Series 'Disenchantment,' The Humor Is Elf-Referential The Netflix series features lush animation and strong voice work, but its three core characters are so reminiscent of Futurama's central trio they struggle to stand on their own.

In Matt Groening's Fantasy Series 'Disenchantment,' The Humor Is Elf-Referential

In Matt Groening's Fantasy Series 'Disenchantment,' The Humor Is Elf-Referential 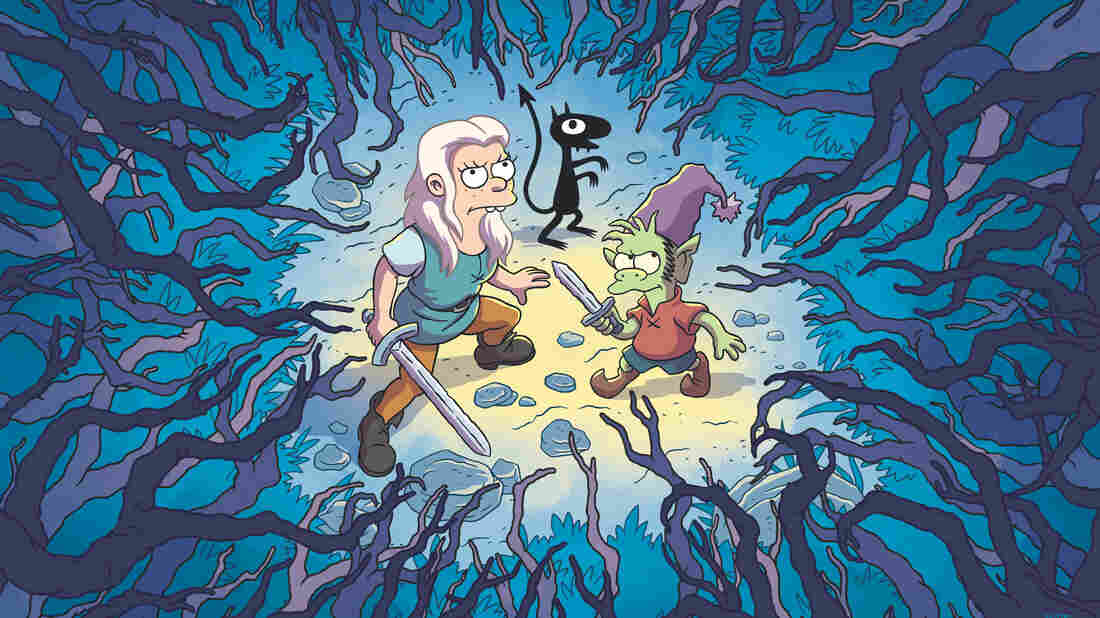 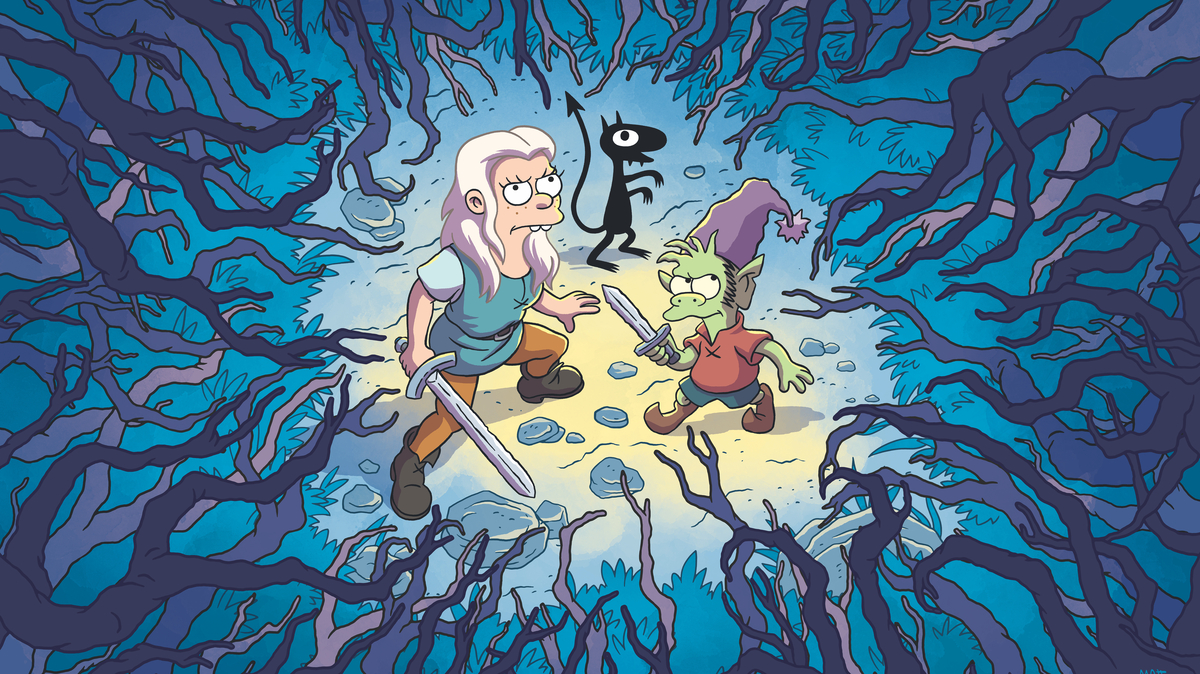 (Clockwise From Top): The demon Luci (Eric Andre), the elf Elfo (Nat Faxon) and the princess Bean (Abbi Jacobson) head into the woods in Disenchantment.

Disenchantment, Matt Groening's new animated series that hits Netflix on Friday, August 17th, does for our mythical past what Futurama did for our imagined future, but it does so in a manner so closely reminiscent of that other show's wryly cynical sci-fi hi-jinks that it could have just as easily been called Pastarama, if that didn't sound quite so much like a seasonal promotion at Olive Garden.

Make no mistake — it looks great. The world of the medieval kingdom of Dreamland, where we lay our scene, is richly realized: The cliffside castle towers over the bustling medieval town, the woods are gloomy and tangled, the mountains loom ominously, periodically backlit by bolts of lightning. Ogres and witches haunt the dark places of this world, while candy-making elves frolic in the sunlit glades.

The backgrounds are lush with detail (and easter-egg jokes), the animation is fluid, and the character designs are ... familiarly Groeningian, let's say: googly eyes, overbites, etc. The voice work is consistently strong, featuring familiar names from the Groeningaverse (Billy West, Tress MacNeille, John DiMaggio and the great Maurice LaMarche) alongside newcomers like Broad City's Abbi Jacobson as the tough, hard-drinking princess Bean, Eric Andre as her personal pointy-tailed demon Luci and Nat Faxon as the soulful, smitten elf Elfo.

Disenchantment's status as a Netflix series colors its content and tone in small but perceptible ways. Episodes clock in at varying lengths and often end on cliffhangers engineered to encourage binge-watching. They contain stronger language and more graphic, if literally cartoony, gore than might make it past a broadcast network's standards-and-practices department, even today. Where both The Simpsons and Futurama share a jaundiced assessment of humanity, Disenchantment's take is, notably, even more caustic. With its depiction of a world ruled by ignorance, where death is swift and frequent, coupled with the utter lack of the kind of tenderheartedness that The Simpsons, especially, traffics in, Disenchantment often comes off as blithely mean, even cruel, to its characters.

The first seven episodes of Disenchantment's ten-episode-season were made available to the press — it's possible, even likely, that some of the show's gleeful severity will modulate. It certainly took both Futurama and The Simpsons more than ten episodes to allow their characters to settle in, and deepen.

Here's hoping the same holds true for Groening's latest series — because a deepening, or more precisely a delineation, is what Disenchantment's core characters still cry out for. At this writing, the series' central trio maps too neatly on that of Futurama: There's the kickass warrior woman (Bean/Leela), the roguish chain-smoking lout/instigator (Luci/Bender) and the hapless lovelorn schmo (Elfo/Fry).

It's early yet, and there's every indication that these characters can and will grow beyond their archetypal, if too-familiar, starting positions. The world around them, as wide and rich and strange as it already is, will surely alter them, and their personal journeys. The high-fantasy genre, even in parody, leaves its protagonists irrevocably changed. They cross a threshold and enter the wider world in which they act, and get acted upon, in ways that alter their most basic selves.

These first promising episodes of Disenchantment can't help but feel like the woolgathering that happens just before the threshold is crossed, and the hero's journey truly begins.