Accessibility links
What, No 'Jaws?' Or: See The Movie, Skip The Book Readers may notice that some famous titles are missing from this year's final list of 100 favorite horror stories — books like Jaws and The Amityville Horror. That's because, frankly, they stink. 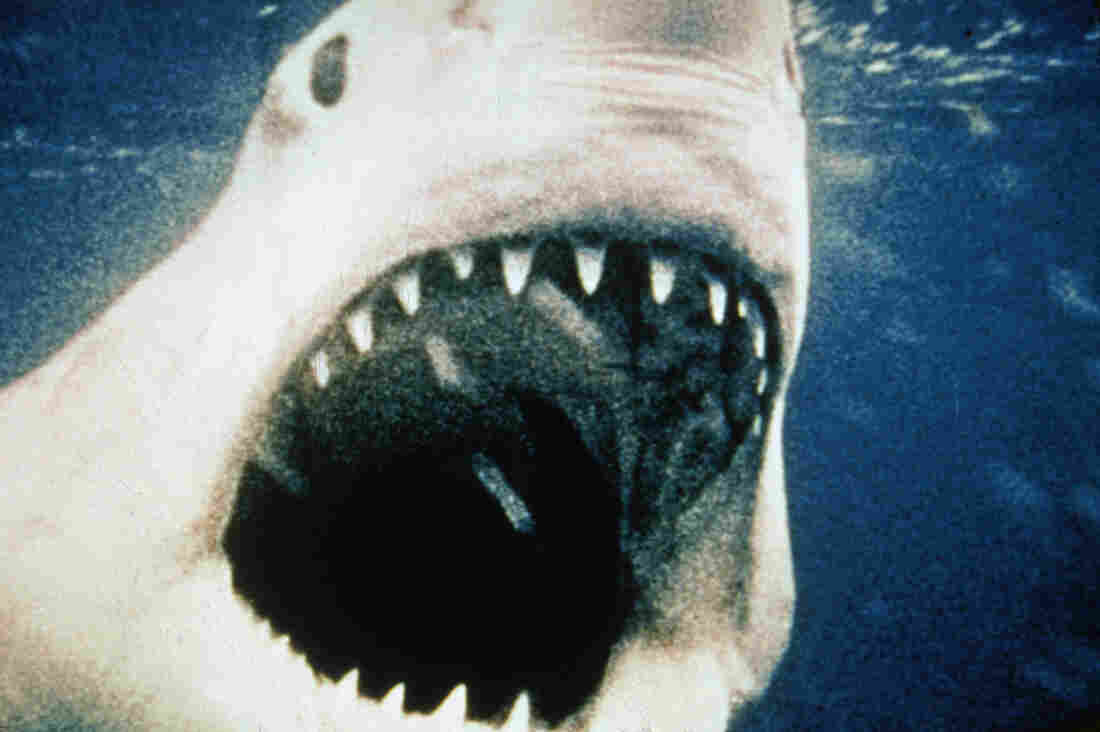 Readers nominated Jaws for our list of 100 favorite horror stories — but our judges recommend you see the movie instead. Getty Images/Getty Images hide caption 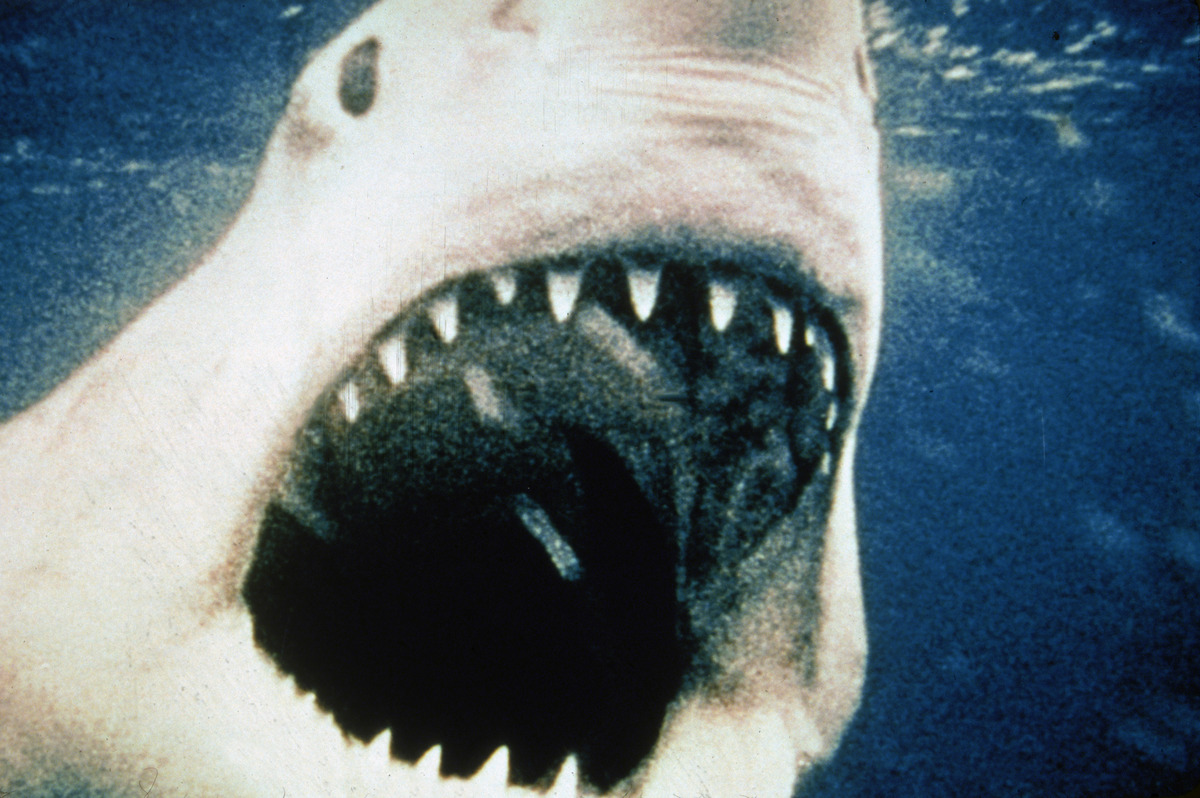 Readers nominated Jaws for our list of 100 favorite horror stories — but our judges recommend you see the movie instead.

Parasitic? Symbiotic? Co-dependent? Cannibalistic? It's hard to find the right word to describe the relationship between horror literature and horror movies. Reading horror is a private experience that isolates the reader from the world and whispers scary things directly into their ears, but takes a long time — and who reads anymore, anyways? Horror movies do all the heavy work of visualizing the unspeakable for viewers, and they only take about 90 minutes to consume, but they're constantly straying over the line between fear and laughter because one person's intense vision of absolute terror is often another person's idea of total dorkiness. (A hockey mask? Really? Is Jason Canadian?)

It's a rare horror novel that wasn't optioned to the movies in the '70s and '80s, and while sometimes the sale simply provided a nice payday for the author but never became a movie, at other times the movie wound up overshadowing the book. Alfred Hitchcock, in particular, turned out one classic film after another, like Rear Window, Vertigo, and Frenzy that have eclipsed their literary sources. When's the last time you heard anyone talking about Cornell Woolrich's short story, "It Had to Be Murder," the French crime novel D'entre les Morts, or the British thriller Goodbye Piccadilly, Farewell Leicester Square? In the public's mind, Norman Bates looks like Anthony Perkins, who played him in the movie, not the middle-aged, obese pornography addict of Robert Bloch's book.

Stephen King's career presents both sides of the book/movie equation. His first novel, Carrie (1974), sold well in paperback, but it wasn't until the deeply faithful Brian De Palma movie came out in November of 1976 that his book sales soared into the stratosphere.

Stanley Kubrick's adaptation of The Shining (1980) left audiences, critics, and King cold, but Kubrick got the last laugh, since most people associate The Shining with Jack Torrance chasing his family with an ax, smiling and saying "Heeeere's Johnny!" and a final showdown in a hedge maze where Danny Torrance retraces his footsteps in the snow — all of which are unique to the movie. Who remembers that Jack Torrance's weapon of choice in the book isn't an ax but a roque mallet, and what the heck is roque?

The fact is, movies simply have the numbers on their side. Does it matter that Ira Levin's novel, Rosemary's Baby, sold 6 million copies when its movie adaptation made $221 million in today's dollars at the box office? Same with The Exorcist, which may have sold an incredible 13 million copies of the book, but that pales next to its adjusted box office gross of almost $1 billion.

But sometimes it's not the numbers that make a movie more memorable, but simply that the movie is better. John W. Campbell Jr.'s 1938 novella "Who Goes There?", about a shapeshifting alien using its powers to hide itself in a band of Arctic scientists, became the loose basis for a 1951 Howard Hawks movie, The Thing from Another World, but it's John Carpenter far more faithful 1982 adaptation, The Thing, that endures. A box office bomb when it was first released, The Thing morphed into an essential part of the horror canon, ravishing viewers with its visual effects that turn mammalian bodies inside out, mutating meat into twitching, slithering, screaming insectoid forms, while trafficking in a thick stew of paranoia.

Peter Benchley's 'Jaws' was a massive bestseller that ... helped spawn a slew of killer animal books in the '70s, but it doesn't hold up today.

And in the case of Jaws (1974) and The Amityville Horror (1977), while both books made it onto the semifinalists' list in this year's reader poll, the panel of judges couldn't bear to include either book, because while these titles may be part of the pop culture canon, the books are deeply inferior to the films.

Peter Benchley's Jaws was a massive bestseller that, along with James Herbert's The Rats, helped spawn a slew of killer animal books in the '70s, but it doesn't hold up today. Bogged down by a mafia subplot, another subplot involving Chief Brody's wife sleeping with pretty much every other character in the novel (including the oceanographer played by Richard Dreyfuss in the film), and a lackluster ending in which the giant shark simply rolls over and dies, it's hard not to feel disappointed that the book isn't more like the sleek, savage entertainment machine directed by Steven Spielberg that cemented Jaws in the public consciousness.

And then there's The Amityville Horror (1977). Jay Anson's book sold a lot of copies, and the 1979 movie sold a lot of tickets, but it's impossible to call either of them good, especially considering their unsavory origins. Thoroughly discredited as a hoax, the Amityville "haunting" was an ugly incident that probably involved child abuse, according to the oldest child in the family, Daniel Lutz — and yet it's somehow spawned 15 films (with a TV series in the works) and numerous books marketed as non-fiction that showcase scenes of demonic pigs surfing on top of jumbo jets, angels rescuing drowning children, and big daddy George Lutz (played by James Brolin in the movie) using martial arts to fight demons. It just goes to show, sometimes the book is better, sometimes the movie is better, and sometimes both are just plain terrible.