Accessibility links
Dozens Overdose In Connecticut Park On Tainted Synthetic Marijuana More than 70 people fell ill in or around a historic park in New Haven, near the Yale University campus. Police believe the synthetic cannabinoid K2 laced with fentanyl caused the rash of overdoses. 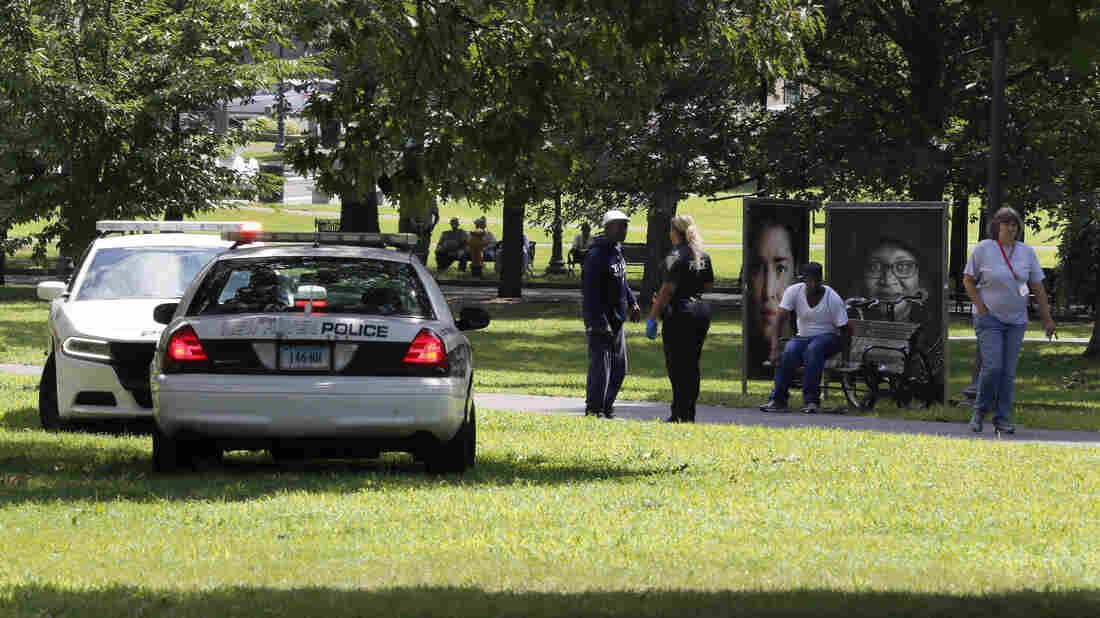 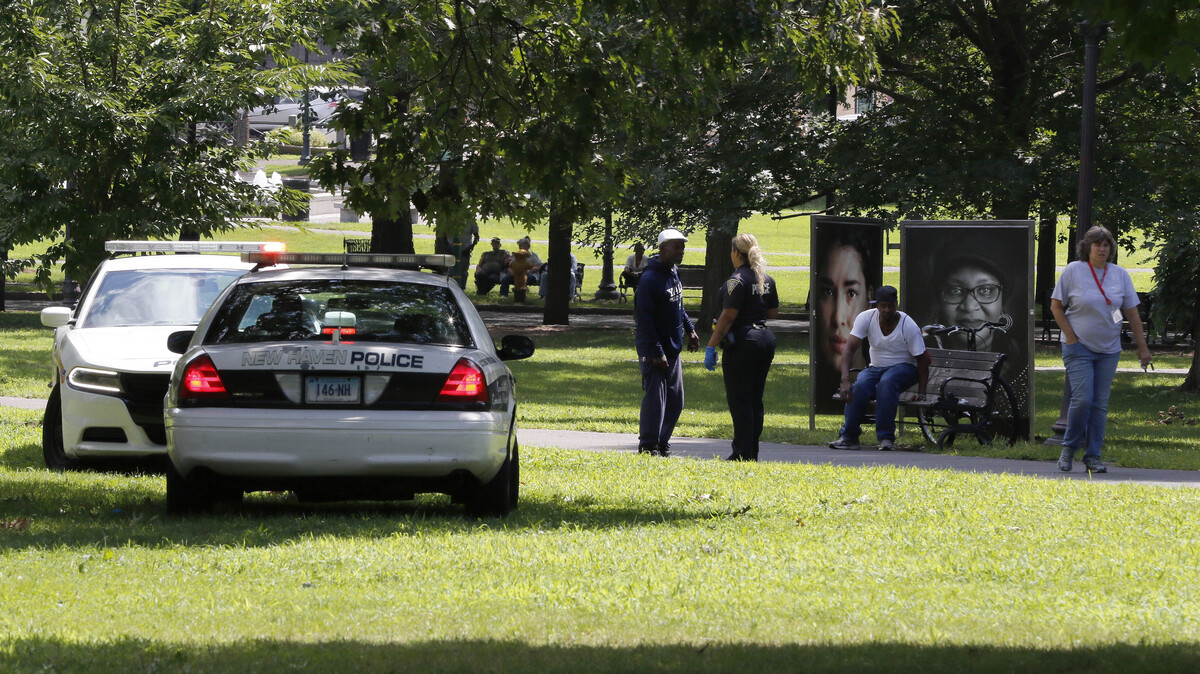 A police officer speaks to a man on New Haven Green, where more than 70 people fell ill from suspected drug overdoses on Wednesday in New Haven, Conn.

More than 70 people overdosed in or around a historic Connecticut park near the Yale University campus on Wednesday after receiving what authorities believe was synthetic marijuana laced with the powerful opioid fentanyl. Although there have been no deaths, at least two people suffered life-threatening symptoms, according to authorities.

Connecticut Public Radio's Diane Orson reports that at least one person has been arrested in connection with the case.

"After 8:00 [a.m. Wednesday], we ended up with 12 victims in a 40-minute period. That caused us to respond with a multi-casualty incident," New Haven Fire Chief John Alston said. "It brought out Yale New Haven Hospital, New Haven Police Department, Fire Department, [American Medical Response]. We also have representatives with the DEA here."

Rick Fontana, the director of emergency operations for New Haven, told Connecticut Public Radio's Tucker Ives that 72 people were transported to local hospitals while four patients refused treatment on scene, for a total of 76 cases.

"Only a few required admittance to the hospital, and most were discharged or left before any treatment," Fontana told Ives.

Most of the overdoses occurred on the New Haven Green, a downtown park adjacent to Yale.

D.C. Has Had More Than 300 Synthetic Marijuana Overdoses In 2 Weeks

"We literally had people running around the Green providing treatment," Fontana said Wednesday, according to The Associated Press.

"Do not come down to the Green and purchase this K2," New Haven Police Chief Anthony Campbell told WVIT-TV. "It is taking people out very quickly, people having respiratory failure. Don't put your life in harm."

The AP reports, "Paramedics and police officers remained at the park all day as more people fell ill. Some became unconscious and others vomited, authorities said. Emergency responders rushed to one victim as officials were giving a news conference nearby late Wednesday morning."

"[Fire Chief] Alston says the substance appears to be some type of synthetic cannabis, but authorities are not sure. Some of the victims were unconscious and in respiratory distress.

At first, the drug [naloxone] — used to treat narcotic overdoses — appeared not to work. 'Narcan was not effective here at the scene,' said Alston. 'However higher concentrations of it in the emergency room proved effective.'

He says one of the victims still had some of the drug, which has been sent off to a lab for testing."

The Hartford Courant said authorities had determined that patients had smoked the synthetic cannabinoid K-2 laced with fentanyl.

Officer David Hartman was quoted by the newspaper as saying the patients were being treated for overdose-related respiratory illnesses.

WVIT reports that the man arrested "is believed connected to at least some of the overdoses" and "had drugs on him at the time of his arrest, [but] has yet to be charged in any of the overdose cases."

"Today's emergency is deeply troubling and illustrative of the very real and serious threat that illicit street drugs pose to health of individuals," Malloy said, according to the Hartford Courant. "The substance behind these overdoses is highly dangerous and must be avoided."

The latest incident in Connecticut comes as new preliminary estimates on 2017 overdose deaths were released by the Centers for Disease Control and Prevention.

The CDC said a record 72,000 Americans died last year because of drug overdose — about 10 percent higher than previous figures. It said major causes of the increase in deaths are the growing number of people using opioids and the increased potency of the drugs themselves.