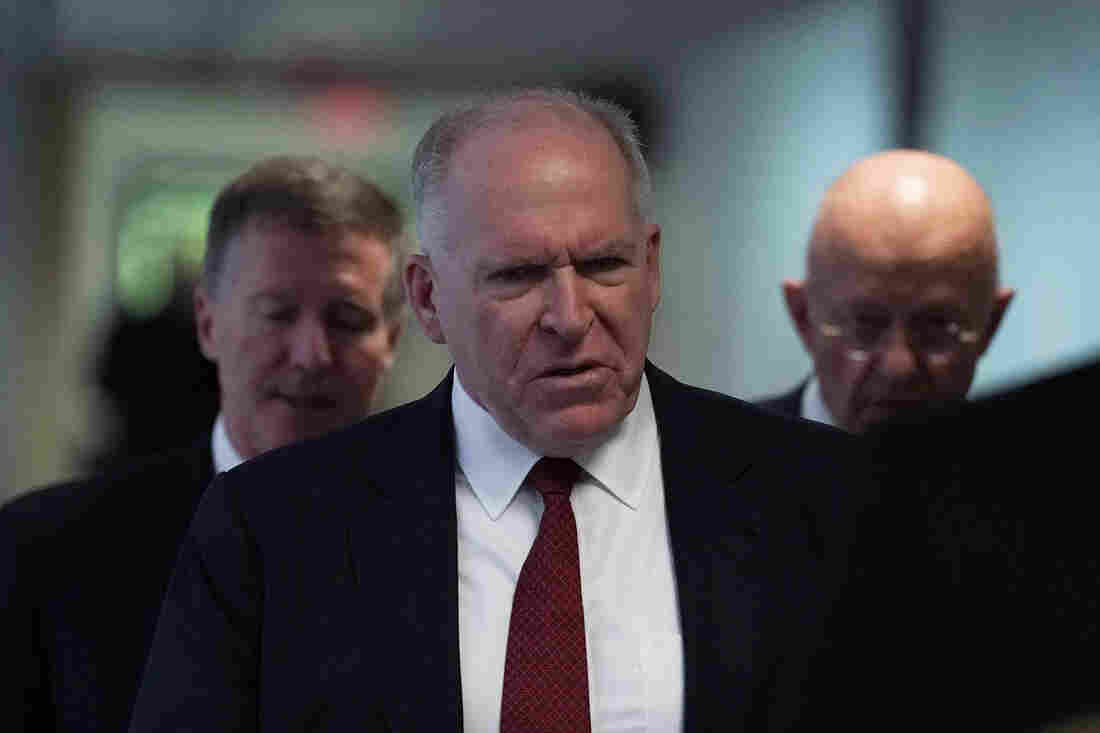 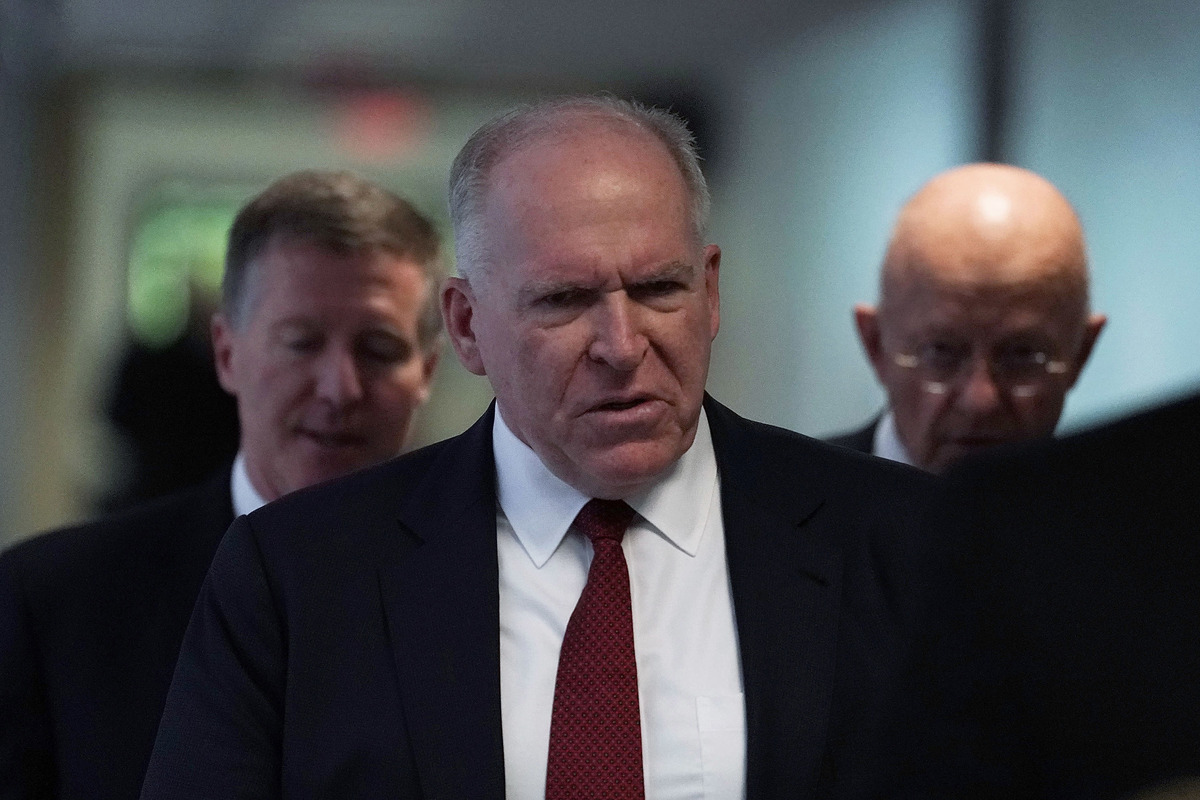 In a letter to White House chief of staff John Kelly, Rep. Elijah Cummings, D-Md., asked for a detailed briefing on the decision and suggested Trump may have failed to follow proper procedures.

Brennan himself also pushed back against the president's move, calling it "desperate" and "politically motivated."

The public spat highlights the increasingly partisan shadow that has been cast over national security and intelligence in the Trump era.

The administration has offered conflicting explanations for the president's decision. Trump's initial statement pointed to what the president called Brennan's "erratic conduct and behavior," a standard that Cummings challenged.

"If making 'outrageous' statements or engaging in 'wild outbursts on the Internet and television' were grounds for denying access to classified information, many of the President's top aides — indeed, perhaps even the President himself — would be swept into this unprecedented new category," the congressman wrote.

Trump later pointed to Brennan's role in investigating Russia's interference in the 2016 presidential election. Brennan helped lead that probe as CIA director in the Obama administration. Trump blames Brennan and others for planting the seeds of the special counsel's probe that has dogged his presidency for the past 15 months.

"I call it the rigged witch hunt," Trump told the Wall Street Journal. "And these people led it."

Trump said that's why he wanted to strip Brennan of his security clearance. "I think it's something that had to be done," he told the Journal.

There was no suggestion that Brennan has leaked classified information.

The White House is also reviewing the security clearance of other former officials who have been critical of the president, including former Director of National Intelligence James Clapper, former National Security Agency Director Michael Hayden and former FBI Director James Comey.

Former high-ranking officials typically retain their security clearance when they leave office so their successors can consult with them on sensitive issues.

In an op-ed for the New York Times, Brennan argued the decision to strip his security clearance and review others' is designed to muzzle the president's political opponents.

"Mr. Trump clearly has become more desperate to protect himself and those close to him," Brennan wrote, calling the clearance revocation "an attempt to scare into silence others who might dare to challenge him."

Hayden made a similar suggestion in an interview with CNN.

"The White House just messaged the entire American intelligence community," Hayden said. "If you stand up and say things that upset the president or with which he disagrees, he will punish you. And that is a horrible message to be sending to folks who are there to tell you objective truth."

The move by Trump seemed not to have its apparent intended effect on William McRaven, a retired Navy admiral who oversaw the raid that killed Osama bin Laden during his time commanding U.S. special operations forces in the Obama administration. In an open letter to Trump published online Thursday afternoon by the Washington Post, McRaven defended Brennan.

The former CIA director "is one of the finest public servants I have ever known," McRaven wrote. "Few Americans have done more to protect this country than John. He is a man of unparalleled integrity, whose honesty and character have never been in question, except by those who don't know him." McRaven continued: "Therefore, I would consider it an honor if you would revoke my security clearance as well, so I can add my name to the list of men and women who have spoken up against your presidency. "

Sen. Bob Corker, R-Tenn., who chairs the Foreign Relations Committee, said he was bothered by the president's move.

"It feels very much like a banana republic kind of thing," Corker said.

Other lawmakers were less sympathetic to Brennan.

In a statement issued Thursday in response to Brennan's op-ed in the New York Times, Sen. Richard Burr, R-N.C., chairman of the Senate intelligence committee, suggested the president's decision to revoke Brennan's security clearance could be well within his "full authority" in some circumstances:

"Director Brennan's recent statements purport to know as fact that the Trump campaign colluded with a foreign power. If Director Brennan's statement is based on intelligence he received while still leading the CIA, why didn't he include it in the Intelligence Community Assessment released in 2017? If his statement is based on intelligence he has seen since leaving office, it constitutes an intelligence breach. If he has some other personal knowledge of or evidence of collusion, it should be disclosed to the Special Counsel, not The New York Times.

"If, however, Director Brennan's statement is purely political and based on conjecture, the president has full authority to revoke his security clearance as head of the Executive Branch."

Sen. John Kennedy, R-La., argued that the former CIA director's own rhetoric in criticizing Trump had cheapened the status of intelligence agencies.

"He's acted like a political hack, and not a national security professional," Kennedy said.

Brennan has been sharply critical of Trump, calling his comments after meeting with Russian President Vladimir Putin last month "nothing short of treasonous." After Trump's attack this week on former White House aide Omarosa Manigault Newman, Brennan tweeted that the president failed "to live up to minimum standards of decency, civility, and probity."

Donald Trump’s press conference performance in Helsinki rises to & exceeds the threshold of “high crimes & misdemeanors.” It was nothing short of treasonous. Not only were Trump’s comments imbecilic, he is wholly in the pocket of Putin. Republican Patriots: Where are you???

Sen. Dianne Feinstein, D-Calif., the former chair of the Senate intelligence committee, who sparred with Brennan when he led the CIA, said Trump's decision "harms our national security and once again shows how petty and thin-skinned President Trump truly is."

The decision to revoke Brennan's security clearance has evidently been in the works for weeks. The original statement released by the White House on Wednesday included a date of July 26, although aides said that was an error. The White House later issued a revised statement with that date removed.