Accessibility links
Toddler's Remains That Were Discovered In N.M. Compound Identified As Missing Child Officials said the decomposed body found in a raid on a rural property in Amalia, are those of missing 3-year-old, Abdul-Ghani Wahhaj. Prosecutors argue he died in a religious ceremony. 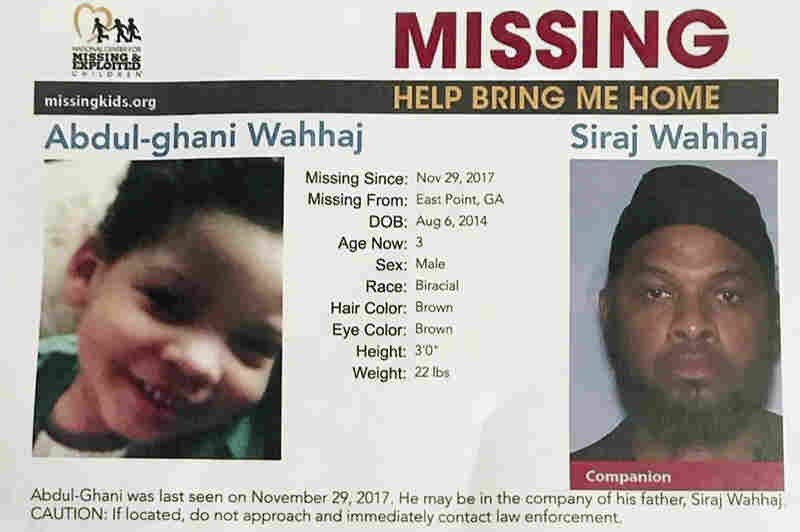 Officials confirmed on Thursday that the remains of a toddler found in a New Mexico compound are those of the missing Georgia child. National Center for Missing & Exploited Children via AP hide caption

New Mexico officials say the decomposed remains of a child found in a raid on a remote, rural property in Amalia are those of missing three-year-old Abdul-Ghani Wahhaj.

The boy was first reported missing from his home in Georgia in December. His mother, Hakima Ramzi, told authorities that the child's father, Siraj Ibn Wahhaj had said he was taking the boy to the park but the pair never returned.

The search for the boy led local and federal authorities to a makeshift compound on Aug. 3, where they discovered 11 malnourished children, ranging in age from 1 to 15, living wretched conditions in an underground trailer.

But the toddler was not among them.

It wasn't until officials returned three days later — what would have been the boy's fourth birthday — that they discovered his body buried in a remote corner of the ramshackle property.

Wahhaj, Lucas Morten, Jany Leveille, Hujrah Wahhaj and Subhannah Wahhaj, who all lived together on the premises were arrested and charged with child abuse following the raid.

On Monday, a federal judge ruled that prosecutors failed to identify any specific threats posed by the defendants. U.S. District Court Judge Sarah Backus ordered the release, with ankle monitors, of everyone but Siraj Wahhaj, pending their trials.

But those four adults remain in custody, one of them having been turned over to Immigration and Customs Enforcement. The other three are reportedly being held because of concerns about their safety.

Wahhaj, 40, was held on a Georgia warrant for the alleged kidnapping of his son.

All 11 children recovered have been placed in protective custody.

During the pretrial detention earlier in the week, Taos County Prosecutor John Lovelace told a federal judge Abdul-Ghani Wahhaj had been washed several times and wrapped in sheets before he was buried.

Lovelace argued the child died in a religious ceremony aimed at casting out demonic spirits from the disabled boy. Apparently, his father believed that demons caused the child to have seizures.

He also said an unnamed witness revealed that the elder Wahhaj and the other adults living on the compound were convinced the child would be resurrected as Jesus four months after his death to instruct the family about various institutions that needed to be destroyed.

"Authorities and court filings allege that the compound featured a makeshift shooting range and that Siraj Wahhaj trained the boys who lived there to handle assault rifles as part of a plan for them to carry out school shootings. County Sheriff Jerry Hogrefe says the group is 'considered extremist of the Muslim belief.' No terrorism charges have been filed."

On Wednesday Taos-area District Attorney Donald Gallegos announced he plans to appeal the federal judge's decision to allow the suspects to be released on bond.

Gallegos told The Associated Press "that he thought the judge received all the information necessary to hold all five defendants in jail pending trial" and that he would like to have another "set of eyes and ears" to reconsider the evidence. As of Thursday afternoon, the appeal had not been filed, the AP reported.

Backus has faced intense criticism and death threats for granting the adults the right to be released on bail.