Accessibility links
How Spanish Women Were Allegedly Targeted In 'Stolen Babies' Cases For Decades A secret adoption network started in Spain in the 1930s as a fascist tactic to purge "communist tendencies" from women who defended the republic, say prosecutors and academics. 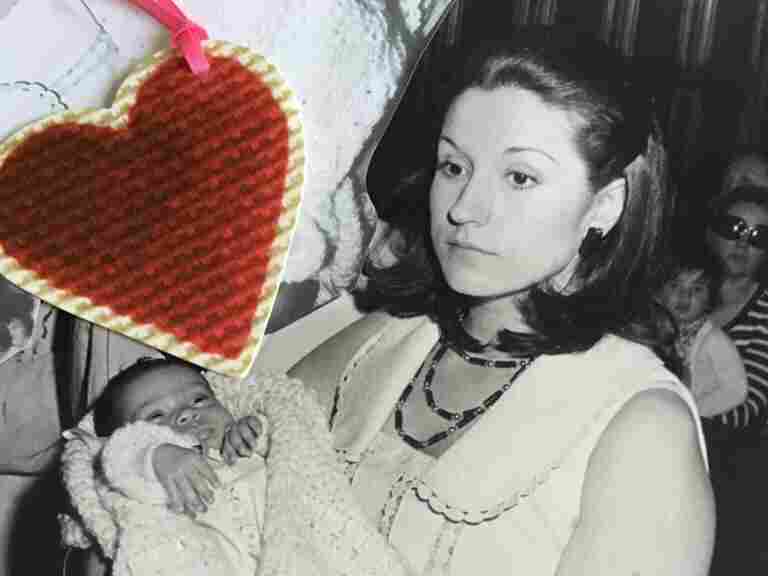 Pilar Navarro, now 68, has sought legal action against a Catholic hospital in Madrid where she claims a baby was secretly stolen from her in 1973. Here she is seen in a photo in 1974 holding a second baby daughter who was not taken from her. Courtesy of Pilar Navarro hide caption 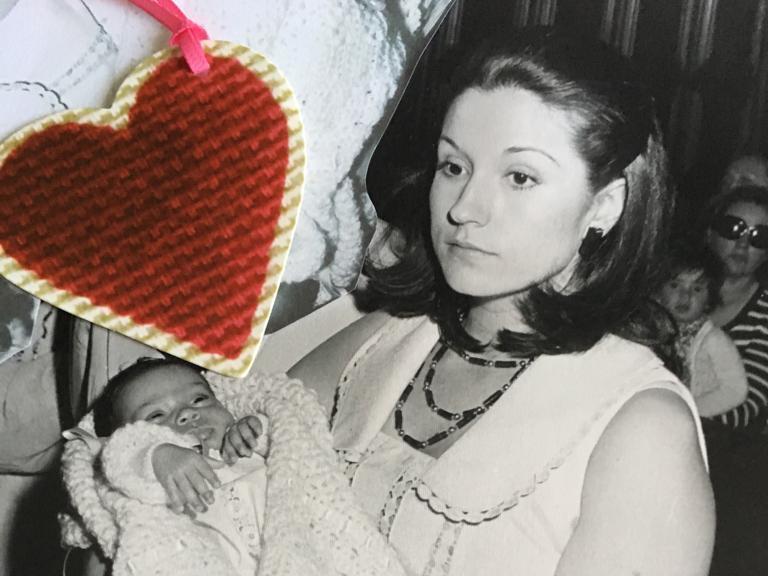 Pilar Navarro, now 68, has sought legal action against a Catholic hospital in Madrid where she claims a baby was secretly stolen from her in 1973. Here she is seen in a photo in 1974 holding a second baby daughter who was not taken from her.

For almost 40 years, Pilar Navarro thought her daughter was dead.

She gave birth at a private Catholic hospital in Madrid in 1973, anxious to start a family. But less than 24 hours after delivery, Navarro's nurse — who was a nun — told her and her husband that the baby had died from respiratory issues. The young couple could not see the body because the hospital had already baptized and buried the child, according to the nurse.

"We never thought a doctor or a nun would do something like that," says Navarro, who is now 68. "We couldn't understand it."

It wasn't until 2011, when thousands of stories about Spain's "stolen babies" came to light, that she thought perhaps her daughter had been stolen too. The stories she read were disconcertingly similar to her own.

Between the 1930s and late 1980s, lawyers and advocates say, newborns were separated in hospitals from their mothers without consent and placed into a sprawling clandestine adoption network. Many of the children wound up in families loyal to the regime of late dictator Gen. Francisco Franco.

Some experts believe it started as a tactic used by Franco to wipe out "communist tendencies" from women who fought for the republic against his fascist military uprising in the 1936-39 Spanish Civil War. It later turned into a moneymaking business, prosecutors and academics say, that lasted well after the country's transition to democracy following Franco's death in 1975.

This June, the first stolen baby trial went to court. Inés Madrigal, 49, is accusing 85-year-old retired gynecologist Eduardo Vela of abducting her as a child and falsifying documents to make her adoptive mother appear to be her biological parent.

The trial was suspended after one day of testimony and is scheduled to resume Sept. 4.

It is just one of more than 3,000 clandestine-adoption lawsuits filed in Spain. Some of the cases have led to investigations, though many have been shelved, according to experts and advocates who follow the cases closely.

A former Spanish judge recorded about 30,000 cases. Campaigners say many thousands more may be unreported.

"I've gone over and over in my head as to why they would steal the girl from me," says Navarro, who filed her case in June 2017.

She believes she was targeted because she didn't fit the image of an "ideal woman" under Franco's ideology. She was 23 years old at the time, actively involved in social movements and community-based organizations that were persecuted by the regime. Her family, including a grandfather who spent six years in prison, had fought with the Republican Army in the civil war.

"Franco made motherhood a state affair and basically nationalized the reproductive role of women," says Aránzazu Borrachero, professor of foreign language and literature at Queensborough Community College in New York. Her research has focused on gender and memory studies. Baby trafficking "falls under the definition of gender-based violence, meaning violent acts that are committed against women or girls because they are female," she adds. 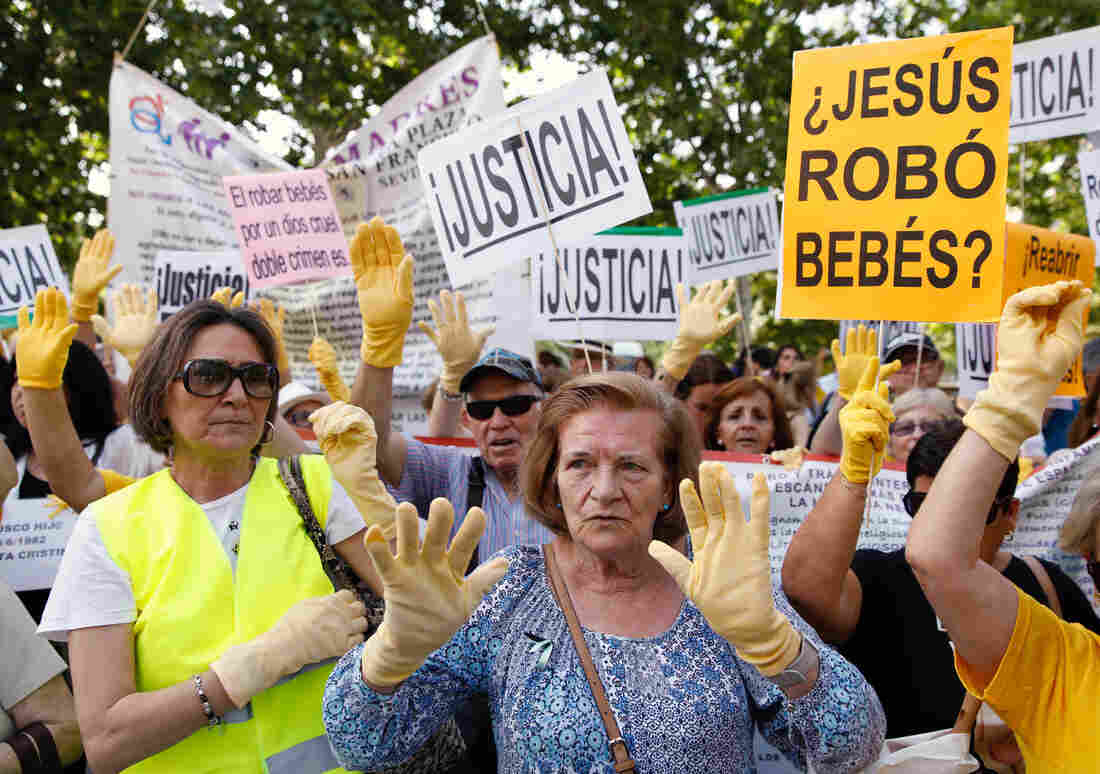 Spaniards take part in a protest over Spain's stolen babies scandal outside a court in Madrid, on June 26. No Spanish government has acknowledged the alleged cases. Juan Medina/Reuters hide caption 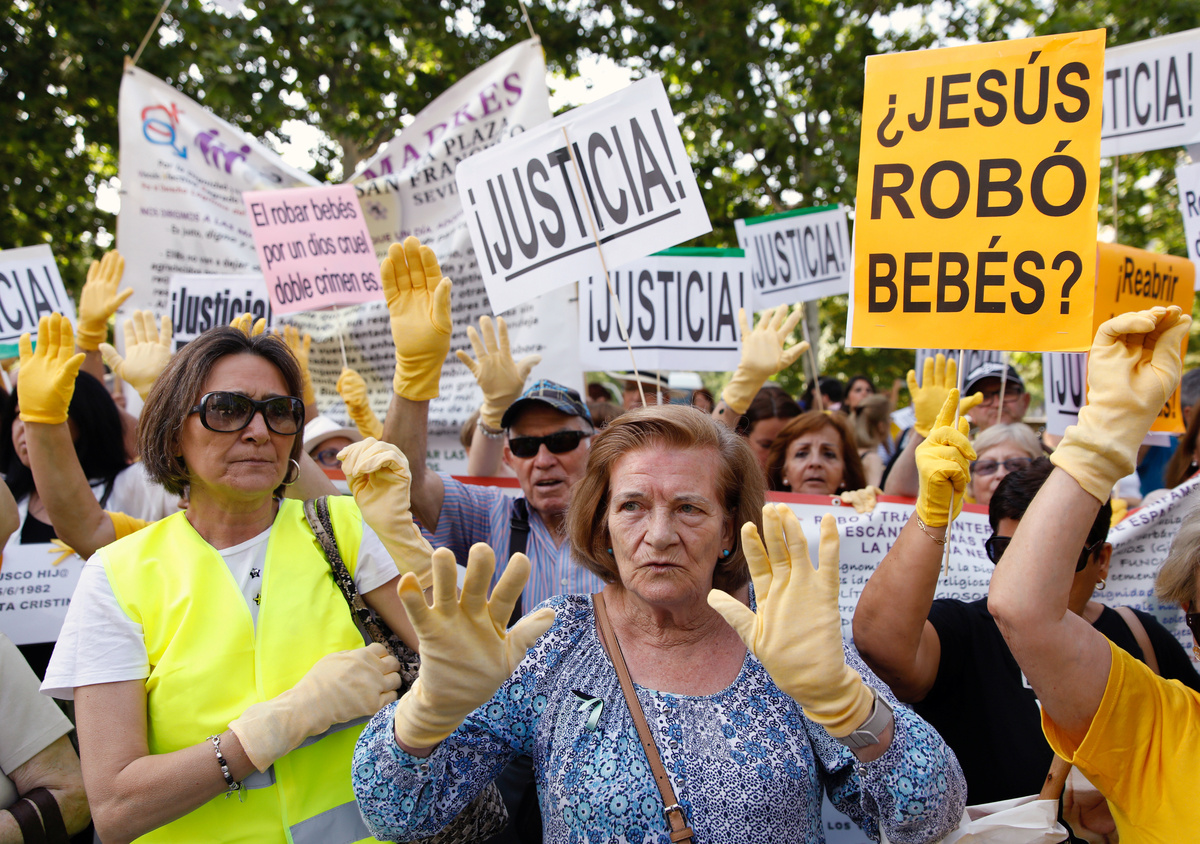 Spaniards take part in a protest over Spain's stolen babies scandal outside a court in Madrid, on June 26. No Spanish government has acknowledged the alleged cases.

Under Franco, women lost many rights they had won during the Second Spanish Republic, which lasted from 1931 to 1939. Divorce became illegal, as did adultery. Women couldn't open up a bank account, get a work contract or leave the country without their father's or husband's consent. They were expected to have many children and keep a conservative Catholic Spanish home.

Yet some women were considered more suitable potential mothers than others. "And that's where the stealing of babies comes in," says Borrachero.

Spanish psychiatrist Antonio Vallejo-Nájera was the leading figure behind the idea that a Marxist ideology was inherited and that Republican women carried what he called a "red gene." With Franco's support, and during a time when eugenics was popular across Europe and the United States, Vallejo-Nájera pushed for children to be separated from mothers who were involved with the Republican Party — whether they were politically active or the sisters, wives or mothers of political dissidents and prisoners.

The practice of baby trafficking allegedly continued throughout the dictatorship, when a financial incentive began to take precedence, Borrachero says. She added that those targeted grew to include working-class women, single women, young women and women who were socially and politically active.

The idea that working-class children could be raised to question the dictatorship is also believed to have served as a moral justification for doctors and nuns to get involved.

Soledad Luque, professor of phonetics and linguistics at Madrid's Carlos III University, says that in comparison with other victims of Franco's crimes — those tortured, imprisoned or killed — the female victims of baby trafficking had no idea what was happening.

"If you have authority figures like nuns, priests, doctors telling you that you're mistaken, the majority of women leave completely ignorant or with a slight suspicion," says Luque, who is also president of a grass-roots organization, whose name translates to All the Stolen Children Are Also My Children, which helps victims find their origins.

Some women were brushed off by their doctors, even their families, when they insisted they wanted to see the baby, or when they struggled to believe their baby had died. It wasn't until decades later that they realized they might have been victims of baby trafficking.

"There's anger at not having realized what had happened then, a huge sense of helplessness at not knowing what to do now," says Luque. "There's tremendous loneliness at having spent so many years going over in your head if it was real or not or if you were going crazy." 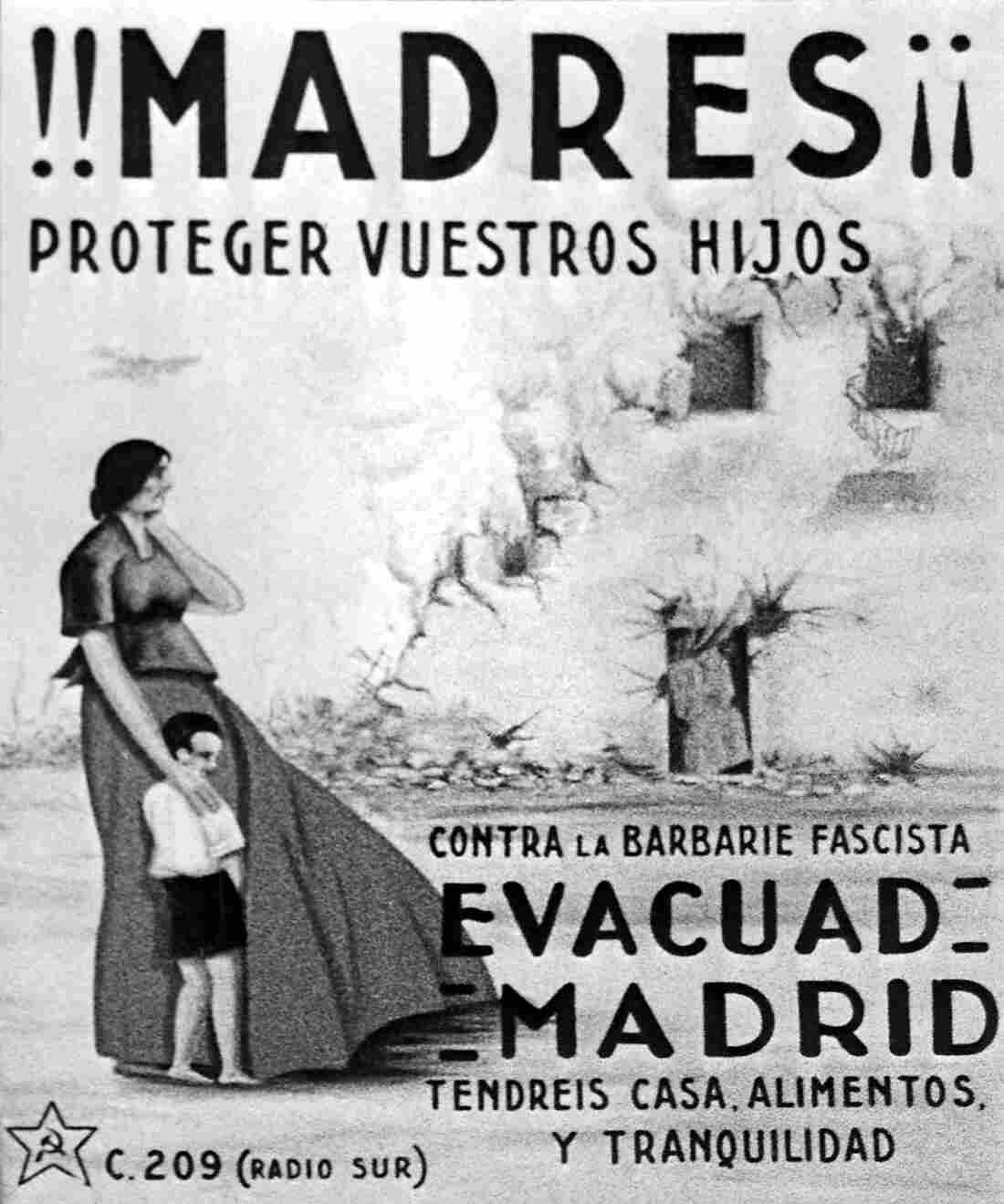 A reproduction of a poster urging inhabitants, especially mothers and their children, to leave Madrid as Gen. Francisco Franco's troops advanced during the Spanish Civil War. The poster reads "Mothers, protect your children!" and "Evacuate Madrid." In smaller print, it reads, "Against the fascist brutality" and "you'll have a home, food and tranquility." Franco conquered Madrid in March 1938. STF/AFP/Getty Images hide caption 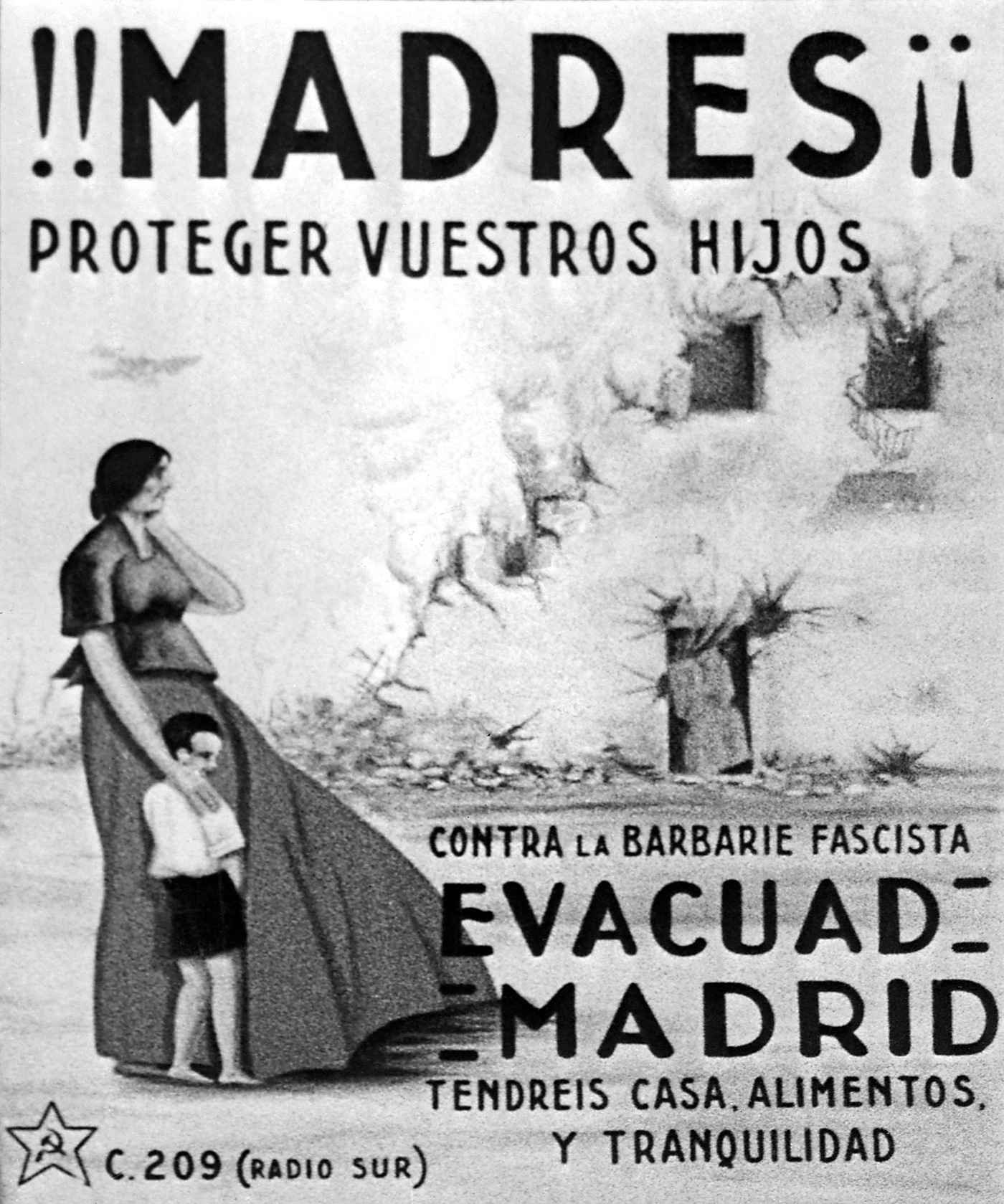 A reproduction of a poster urging inhabitants, especially mothers and their children, to leave Madrid as Gen. Francisco Franco's troops advanced during the Spanish Civil War. The poster reads "Mothers, protect your children!" and "Evacuate Madrid." In smaller print, it reads, "Against the fascist brutality" and "you'll have a home, food and tranquility." Franco conquered Madrid in March 1938.

To this day, no Spanish government has publicly acknowledged that trafficking of babies took place. There's disagreement about whether the practice was a Franco crime; some argue it was a black market that developed while the late dictator was in power. But Borrachero says that while the ideological justification was more implicit during the 1930s, it continued for decades.

"How does an ideology disappear and vanish?" says Borrachero. "It was there. What was added was the money, but it's not one thing replacing the other."

Four months after giving birth to her first daughter, Navarro got pregnant again. This time, she was able to take her baby girl home. Today, she has two grandchildren from her. But she continues to look for her first child, through old hospital records and documents, in the hopes that she may still be out there.

"Any mother would understand the pain that the victims of baby trafficking have gone through," Navarro says. She struggles with her words as she holds back tears.