Accessibility links
Monsoon Floods Have Killed More Than 320 People In Kerala, India The heavy rainfall has resulted in deadly landslides and flash floods, leaving hundreds of thousands of people homeless.

Monsoon Floods Have Killed More Than 320 People In Kerala, India

Monsoon Floods Have Killed More Than 320 People In Kerala, India 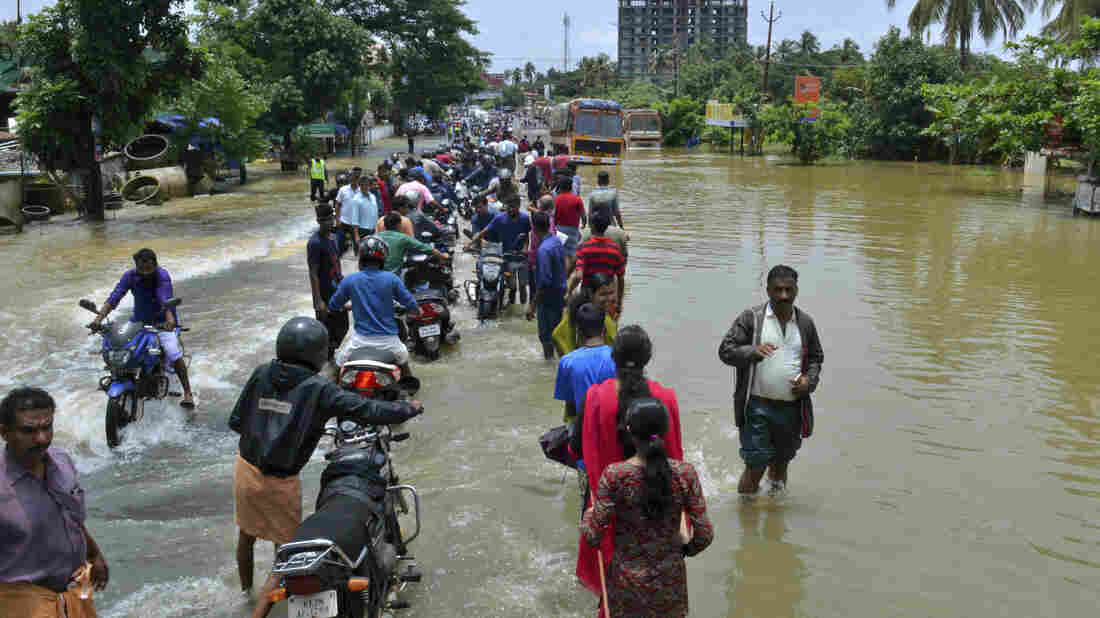 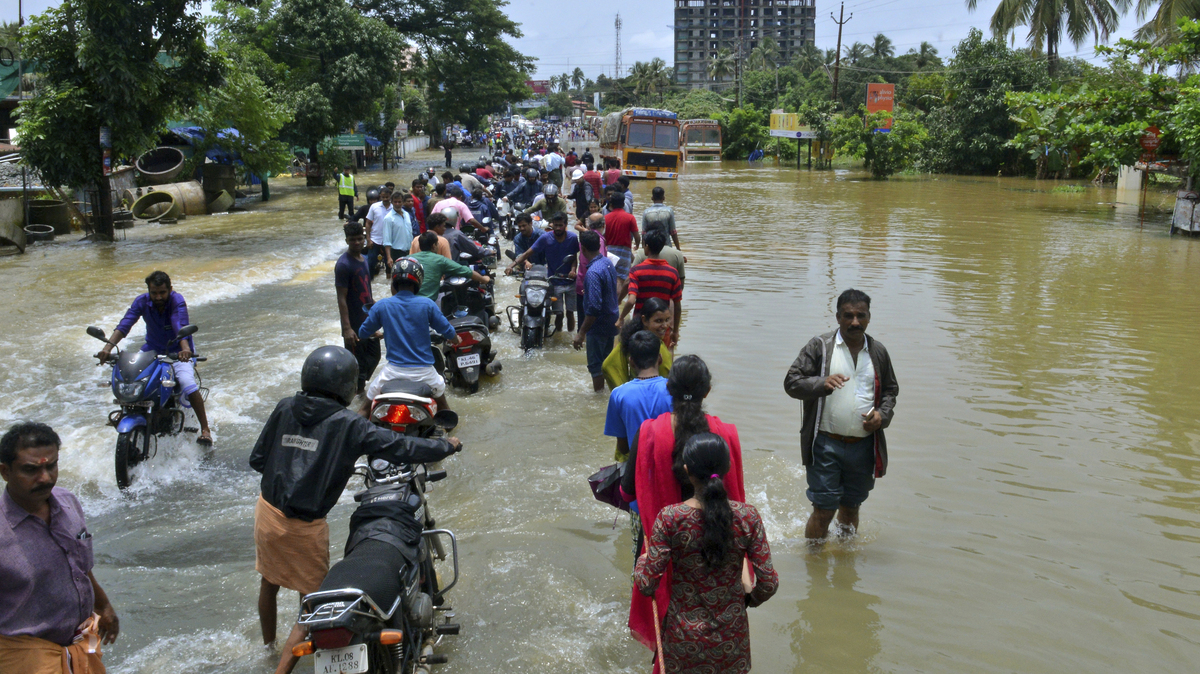 People move past a flooded road in the southern Indian state of Kerala, where monsoon rains have destroyed roads and left hundreds of thousands of people homeless.

The official death toll from flooding in the Indian state of Kerala spiked to at least 324 people on Friday, and the office of Kerala's chief minister, Pinarayi Vijayan, said "the rains continue to remain strong."

More than 223,000 people are now being housed in some 1,500 relief camps, Vijayan's office says. Nearly the entire state in southern India is under a red alert.

"Torrential rains have been battering Kerala for the past nine days, causing the worst floods to hit the coastal state in a century," Sushmita Pathak reports from Mumbai for NPR's Newscast unit.

"We're witnessing something that has never happened before in the history of Kerala," Vijayan told reporters, according to The Guardian.

Monsoon rains have wrecked huge swaths of Kerala, known for its tropical beaches; wildlife; and tea, coffee and spice plantations. The Guardian reports that tens of thousands of homes and 6,000 miles of roads have been destroyed or badly damaged.

Many of those killed were crushed by debris from landslides, according to the BBC. Earlier in the week, flash flooding swept away 11 people in central India, the CBC reported. Their fate remains unknown.

With more heavy rain and wind forecast, NPR's Colin Dwyer reported that India's government is rushing to rescue those stranded in the floodwaters:

"Authorities have opened nearly all of the dams in the state — a desperate gambit meant to ease the pressure the rainfall has exerted on their structures, but that has further flooded low-lying areas nearby and left residents stranded on the small pockets of dry land they can find."

Dwyer added, "Prime Minister Narendra Modi, who will be visiting the besieged region, also announced Thursday that he has asked India's defense ministry 'to further step up the rescue and relief operations across the state.' "

India's government has deployed soldiers, helicopters and some 200 boats to assist in rescue efforts.

The monsoon season is also hitting the region's economy. Reuters reports that the rain has impacted local crops, with rubber output likely to fall 13.5 percent from a year ago. The news agency adds that Amazon has had to halt deliveries in some parts of Kerala.

Modi said he would travel to Kerala to take stock "of the unfortunate situation."

Spoke to Kerala CM Shri Pinarayi Vijayan again this morning. We discussed the flood situation in the state. Have asked Defence Ministry to further step up the rescue and relief operations across the state. Praying for the safety and well-being of the people of Kerala. @CMOKerala

Schools in all 14 districts of Kerala are closed, and the state's main airport will reportedly remain shut down until at least Aug. 26.

The forecast calls for continued rains in the region for several days.