Accessibility links
California Legal Challenges To Census Citizenship Question To Continue A federal judge in San Francisco has rejected the Trump administration's motion to dismiss two lawsuits over the 2020 census question. A potential trial could start in January 2019. 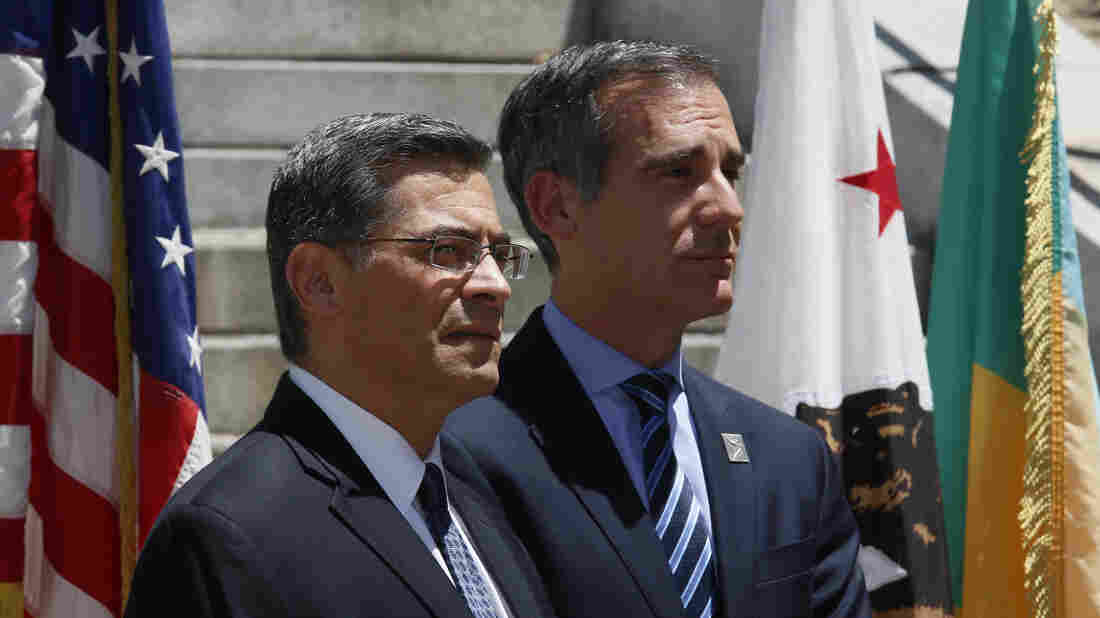 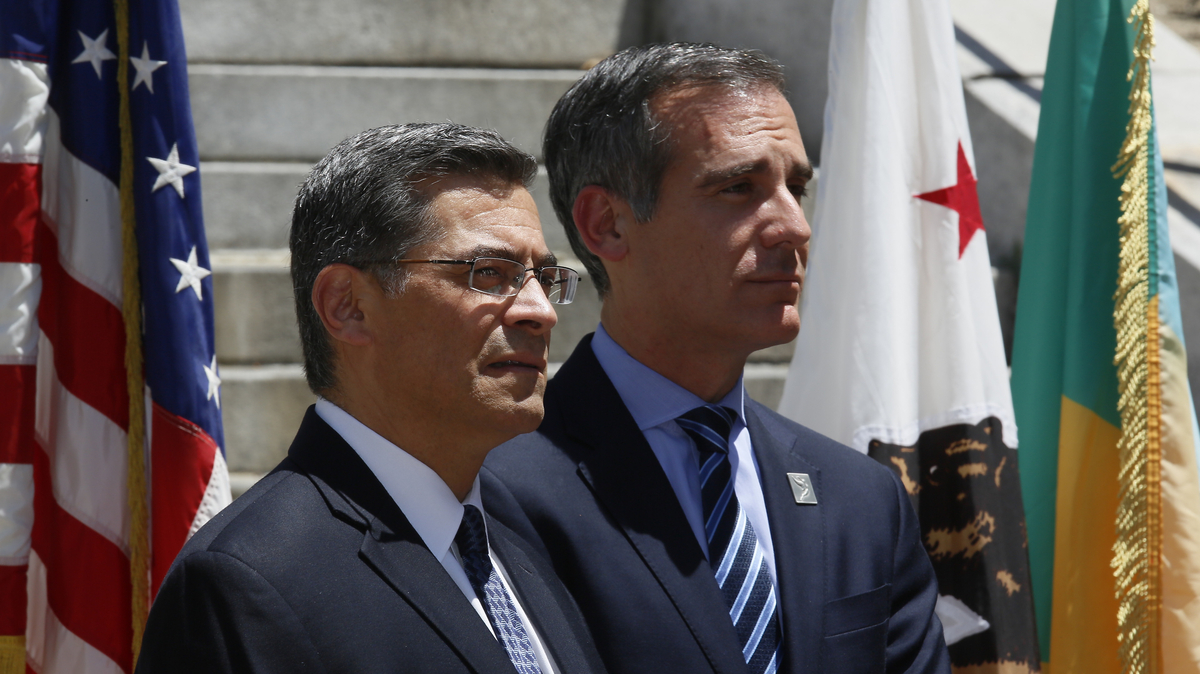 California Attorney General Xavier Becerra (left) and Los Angeles Mayor Eric Garcetti announced the city and county of Los Angeles, plus four other cities, were joining California's lawsuit over the 2020 census citizenship question in May.

The Trump administration has lost another round in its efforts to get courts to dismiss lawsuits challenging the citizenship question it added to the 2020 census.

The ruling sets up a legal fight that may extend into the final months of preparation for the national head count. It follows an order last month by a judge in New York, who rejected the Justice Department's efforts to get two similar lawsuits filed by the state of New York, plus more than two dozen other states, cities and other groups, tossed out.

The lawsuits in San Francisco were filed by the state of California — the first to sue after the new citizenship question was announced in March — as well as the city and county of Los Angeles, a handful of other cities in California, and the Black Alliance for Just Immigration, a California-based immigrant-rights group led by Black Lives Matter co-founder Opal Tometi. Their attorneys, plus those for the Justice Department, are now gearing up for a potential trial that could start on Jan. 7, at the U.S. District Court for the Northern District of California.

The New York cases are moving toward a potential trial that could begin in late October. Attorneys for those cases are arguing that the decision to add a question about U.S. citizenship status by Commerce Secretary Wilbur Ross, who oversees the census, was a misuse of Ross' authority and motivated in part to discriminate against immigrant communities of color.

Seeborg's order opens up an additional front against the Commerce Department and Census Bureau, which are both named as defendants in all six lawsuits over the hotly contested question. In addition to their claims under the Administrative Procedure Act, the judge is allowing the California plaintiffs to argue that adding a question about U.S. citizenship status to census forms is unconstitutional because it may prevent the federal government from counting every person living in U.S. — regardless of citizenship status — as required by the Constitution once a decade.

In his order, Seeborg wrote that the plaintiffs "make a sufficient showing" that the new citizenship question "will undermine" the accuracy of the head count and "violate the Constitution's actual enumeration command."

Numbers from the U.S. census shape how power and federal dollars are distributed around the country. How many congressional seats and Electoral College votes each state gets, as well as the share of federal funding for schools, roads and other public institutions and services, are all tied to the population count.

Research by the Census Bureau suggests noncitizens may avoid taking part in the census if forms for the head count include a citizenship question. The lawsuits' plaintiffs argue that growing anti-immigrant sentiment and increased immigration enforcement under the Trump administration make citizenship status an especially sensitive topic to ask all U.S. households about for the census.

Ross has testified in Congress that the Justice Department "initiated" the request for a question about citizenship — a topic the Census Bureau has not included in the census for all U.S. households since 1950 — in order to better enforce the Voting Rights Act's provisions against racial discrimination. Since that law was enacted in 1965, the government has relied on estimates of U.S. citizens from a Census Bureau survey now known as the American Community Survey, which federal law requires one in 38 households to complete every year.

Emails and memos filed in federal courts as part of the lawsuits, however, make clear that Ross pressured his staff at the Commerce Department to get the question onto the 2020 census months before the Justice Department formally submitted its request to the Census Bureau in December 2017.

Attorneys for the lawsuits' plaintiffs are expected to question officials from the Commerce Department and Census Bureau through the next few weeks during depositions focusing in part on the Trump administration's motivations for the citizenship question. On Friday, U.S. District Judge Jesse Furman ordered the Justice Department to make John Gore, the acting head of its civil rights division that allegedly needs responses from the citizenship question to better enforce the Voting Rights Act, available to testify out of court.

Meanwhile, the fates of two lawsuits at Maryland federal court over the citizenship question are still unclear.

After hearing oral arguments on July 18 over the Justice Department's motion to dismiss a lawsuit brought by a group of residents from Maryland and Arizona, U.S. District Judge George Hazel has not yet released a ruling.

The Justice Department has asked Hazel to extend the deadline to Aug. 24 for filing a motion to dismiss another lawsuit filed in May by various groups, including La Unión del Pueblo Entero, a community group in Texas' Rio Grande Valley founded by labor activists César Chávez and Dolores Huerta.