Accessibility links
A Young Woman Claims Her Power In 'Open Me' Lisa Locascio's novel follows 18-year-old Roxana, whose summer abroad in Denmark becomes both a political and sexual awakening when she falls for the Danish student charged with helping her settle in.

A Young Woman Claims Her Power In 'Open Me'

A Young Woman Claims Her Power In 'Open Me' 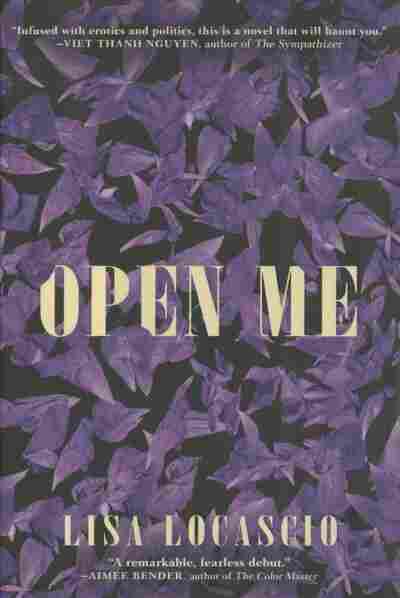 Young women occupy a perilous space in the world: Their bodies are desired, their youth fetishized, and they're simultaneously placed on a pedestal and reviled as maddeningly seductive. Rarely, if ever, are their own desires allowed to flourish without judgment, slut-shaming side-eye, or envious jabs. And if they are left alone, they often fall into the opposite trap of considering themselves unwanted, unwantable, their desirability carefully measured by culture, fashion, and violence. It is against the grim backdrop of this reality that Lisa Locascio's debut novel, Open Me, shines so brightly.

Roxana, who narrates the novel, is only 18, and as confused as anyone who's just graduated high school would be. She isn't sure yet what she wants to study in college, she relies on her best friend Sylvie for support and affirmation, and her world is turned upside down when her parents announce they are getting divorced. On top of all that, Roxana was meant to spend the summer in Paris with Sylvie, but the company they booked their study abroad experience with screwed up, and so in the opening pages of the novel, Roxana arrives alone in Denmark instead of France.

Søren meets Roxana when she gets off the plane in Copenhagen. Charged with helping her settle in, the 28-year-old Søren becomes entranced by the American in his care, and she, feeding off his desire while developing her own, is just as excited by him. Over the course of the novel we learn about Roxana's early solo sexual experiences, and the development of her fantasy life — but the only person she's been with physically was a disappointing boy named Hunter. Now, with Søren, it's different:

So many times I had imagined how it would happen, how I would get to be in this place, the close place, the sex place, the space of nudity and bodies together, rotating in whichever face, but all I had to go on were movies and television and books, dreams and the playground with Hunter. Nothing real. None of it shimmered. But now it was me. I was the shimmering thing.

And so it begins. Roxana recognizes the dynamics of this moment: "Power, I thought, power, power. My power."

She changes her plans, leaves behind the structured student experience she's supposed to have and goes off with Søren, who is trying to finish his thesis on African-American literature. They set up house together in his uncle's empty apartment, but things begin to go south quickly. For one thing, Søren leaves Roxana without a key, meaning she's stuck in the apartment while he goes to work at the library. For another, she begins to see a side of him she doesn't appreciate, a cold and angry side that, for discerning readers, was present long before Roxana faces it. But ultimately, no matter how much Søren may try to isolate Roxana and manipulate her, she doesn't quite become his victim. She is too sure of her physical needs and pleasures, too wrapped up in a fantasy that keeps her strong and safe because it allows her to shape reality into something thrilling, even in the depths of boredom.

Locascio manages in this novel to critique white supremacy and false tolerance while also celebrating a young woman's sexuality and her right to it.

Locascio deliberately sets the novel in Denmark in 2010, before the European refugee crisis that started in 2015, so the xenophobia Roxana witnesses in Søren isn't the result of a new problem, but rather a longstanding issue. When she meets a refugee from Serbia, known by locals as Geden, she's fascinated by him — first, because Søren hates him on principal, and how thrilling to grow close to someone her bitter, angry host disapproves of! And, second, because he is interesting and attractive to her, and one thing Roxana is learning during her time abroad is that she can ask for what she wants. Geden tells her that "Scandinavians do not like the idea that anyone would have reservations about their country, even the passing thought that it might not be the best place in the world. They require absolute conformity and obedience. They have fetishized the art of tolerance, but only as an accessory."

In Søren, Roxana witnesses a deep-rooted xenophobia tied up in love of country, and she doesn't stay silent — she tries to both understand where he's coming from and argue with him. Until, that is, it becomes clear to her that there's no point: "Trying to understand him was trying to do what he would not do for anyone else, I realized suddenly. The knowledge tasted bitter." Still, she stays, at least for a while, until she finds another option, another fantasy she can fulfill.

Locascio manages in this novel to critique white supremacy and false tolerance while also celebrating a young woman's sexuality and her right to it — a difficult, and often joyous feat that marks her as a remarkable author to keep your eyes on.