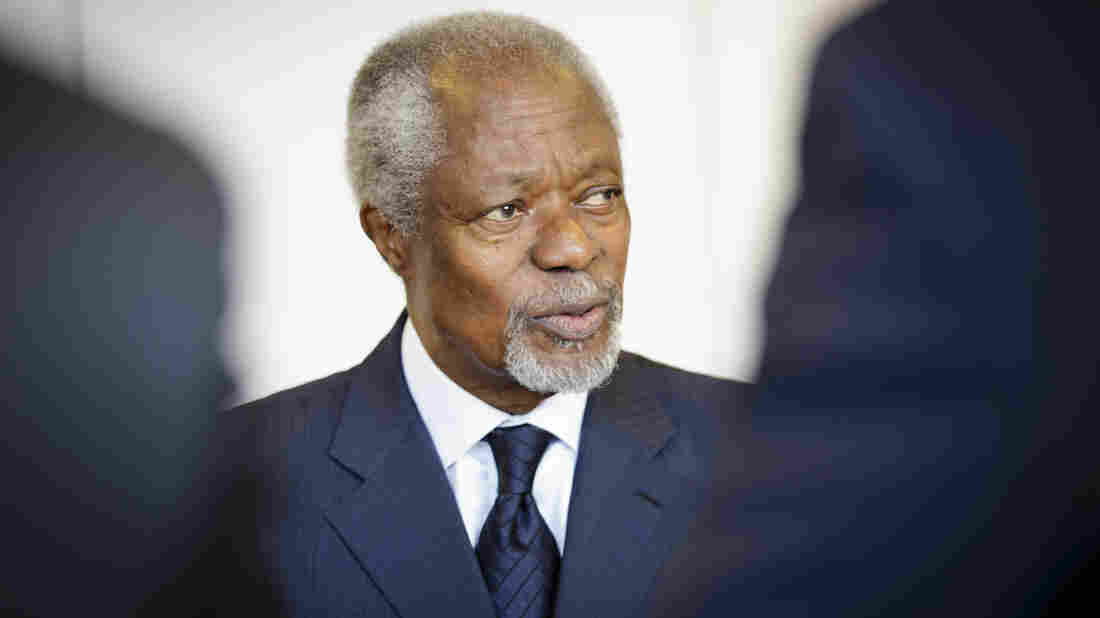 Kofi Annan was awarded the Nobel Peace Prize jointly with the United Nations in 2001 "for their work for a better organized and more peaceful world." Inga Kjer/Photothek via Getty Images hide caption 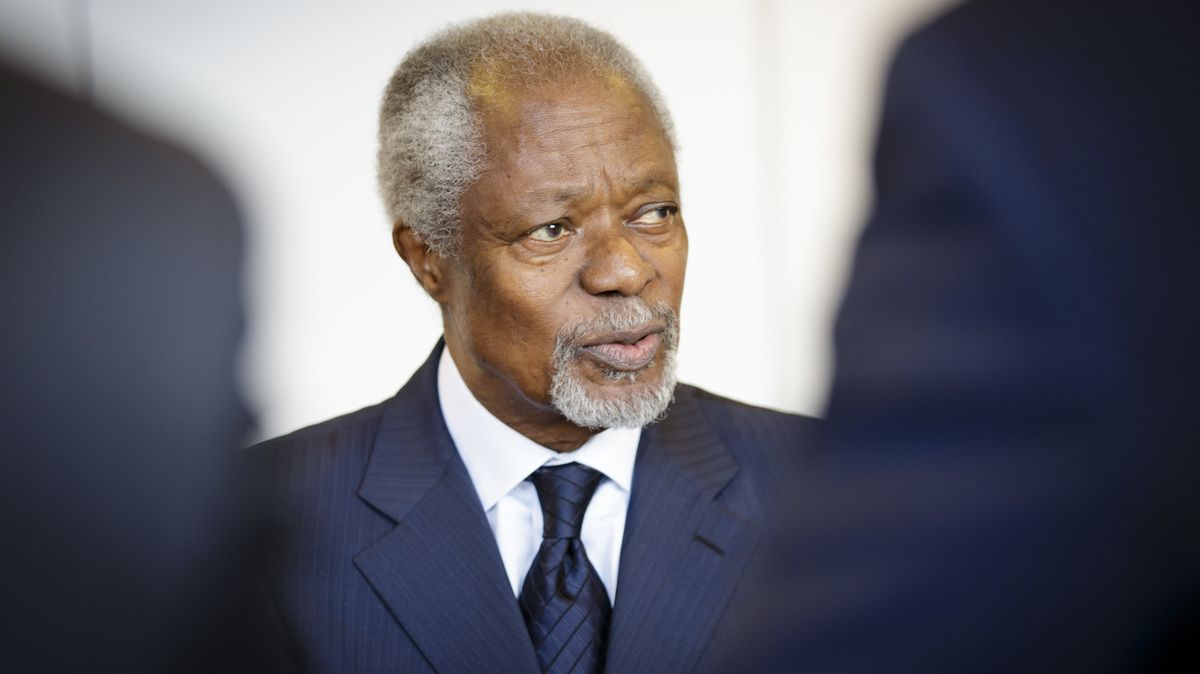 Kofi Annan was awarded the Nobel Peace Prize jointly with the United Nations in 2001 "for their work for a better organized and more peaceful world."

"Kofi Annan was a global statesman and a deeply committed internationalist who fought throughout his life for a fairer and more peaceful world. During his distinguished career and leadership of the United Nations, he was an ardent champion of peace, sustainable development, human rights and the rule of law," the Kofi Annan Foundation and Annan family said in a statement.

The foundation said he died "peacefully" after a "short illness," adding, "His wife Nane and their children Ama, Kojo and Nina were by his side during his last days."

Born on April 8, 1938, in what is now Kumasi, Ghana, Annan took his first job with the U.N. system in 1962, as a budget officer with the World Health Organization, according to the Kofi Annan Foundation. He began working with the U.N. refugee office in 1980, before advancing to higher positions there in the 1980s and 1990s. As the head of peacekeeping operations starting in 1993, Annan would "be sorely tested by devastating wars in Somalia, Rwanda and Bosnia," NPR noted in 2012.

Annan was the seventh secretary-general of the United Nations, serving between 1997 and 2006. He was the first career staffer in the U.N. and the first black African to rise to the organization's most prominent job. He served for two terms.

He was awarded the the Nobel Peace Prize jointly with the United Nations in 2001 "for their work for a better organized and more peaceful world." The Nobel Committee "also recognized his commitment to the struggle to contain the spreading of the HIV virus in Africa and his declared opposition to international terrorism," according to the Nobel Foundation.

In Oslo, Norway, in 2001, Annan spoke of having "three key priorities" for the future of the U.N. in the 21st century: "eradicating poverty, preventing conflict, and promoting democracy. Only in a world that is rid of poverty can all men and women make the most of their abilities. Only where individual rights are respected can differences be channeled politically and resolved peacefully. Only in a democratic environment, based on respect for diversity and dialogue, can individual self-expression and self-government be secured, and freedom of association be upheld."

Annan left the U.N. in 2006, establishing the Kofi Annan Foundation the next year "with the aim of mobilising political will to overcome threats to peace, development and human rights." He went on to serve in various peace and development advocacy groups, including the Africa Progress Panel, a panel appointed by the African Union after violence marred Kenya's 2007 election and The Elders, a group of global leaders founded by Nelson Mandela.

Annan was appointed as a joint U.N. and Arab League envoy to Syria in 2012 after the outbreak of war there. He quit that post in frustration, blaming the Syrian "government and its intransigence," along with diplomatic maneuvering by Russia and China and the U.N. Security Council.

"I felt undercut, and I also felt that perhaps I was seeing the problem differently than they were, because honestly I don't see a military solution in the Syrian crisis," Annan told NPR in 2012.

Diplomats around the world reacted quickly to his death. The current U.N. secretary-general, António Guterres, called Annan "a guiding force for good. ... In many ways, Kofi Annan was the United Nations. He rose through the ranks to lead the organization into the new millennium with matchless dignity and determination," he said in a statement.

The president of Ghana, Nana Akufo-Addo, tweeted his condolences to Annan's family, adding that Ghana's flag will fly half-staff around the world for one week starting on Monday. Annan, the first secretary-general of the United Nations from sub-Saharan Africa, "brought considerable renown to our country by this position and through his conduct and comportment in the global arena," Akufo-Addo wrote.

"Deeply saddened by the passing away of Kofi Annan. One of the true global leaders of our age. A man of courage, wisdom and friendship. I'm honored to have had the privilege of working for him," Carl Bildt of the European Council on Foreign Relations wrote on Twitter.

"Kofi was humanity's best example, the epitome, of human decency and grace. In a world now filled with leaders who are anything but that, our loss, the world's loss becomes even more painful," U.N. High Commissioner for Human Rights Zeid Ra'ad Al Hussein said in a statement.