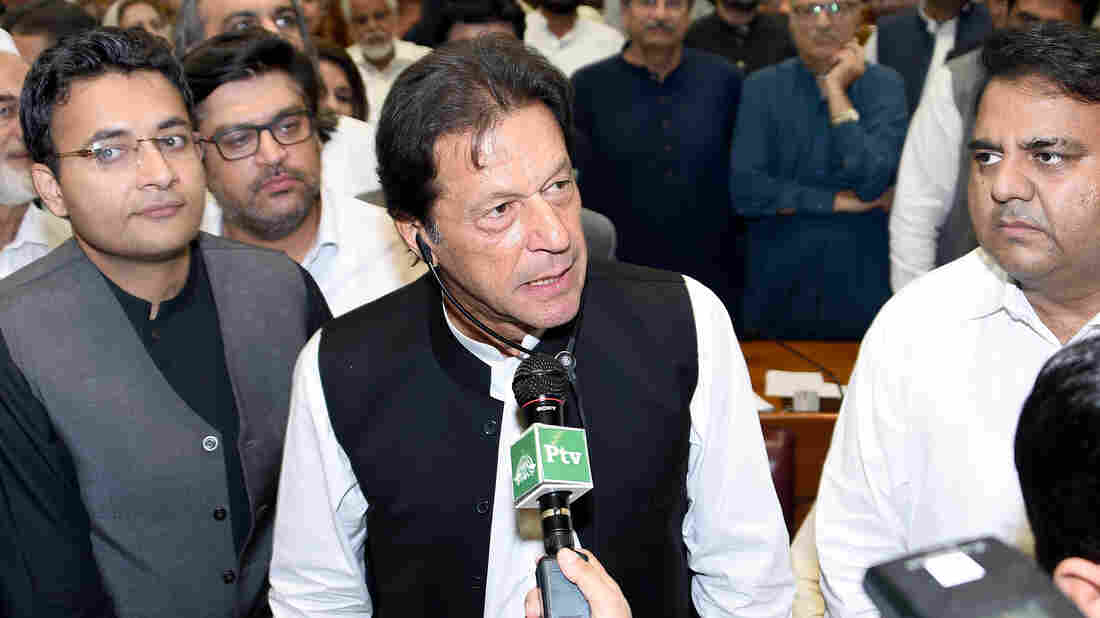 Former cricket star Imran Khan was sworn in as Pakistan's new prime minister on Saturday. One of his first challenges will be shoring up the country's economy. AP hide caption 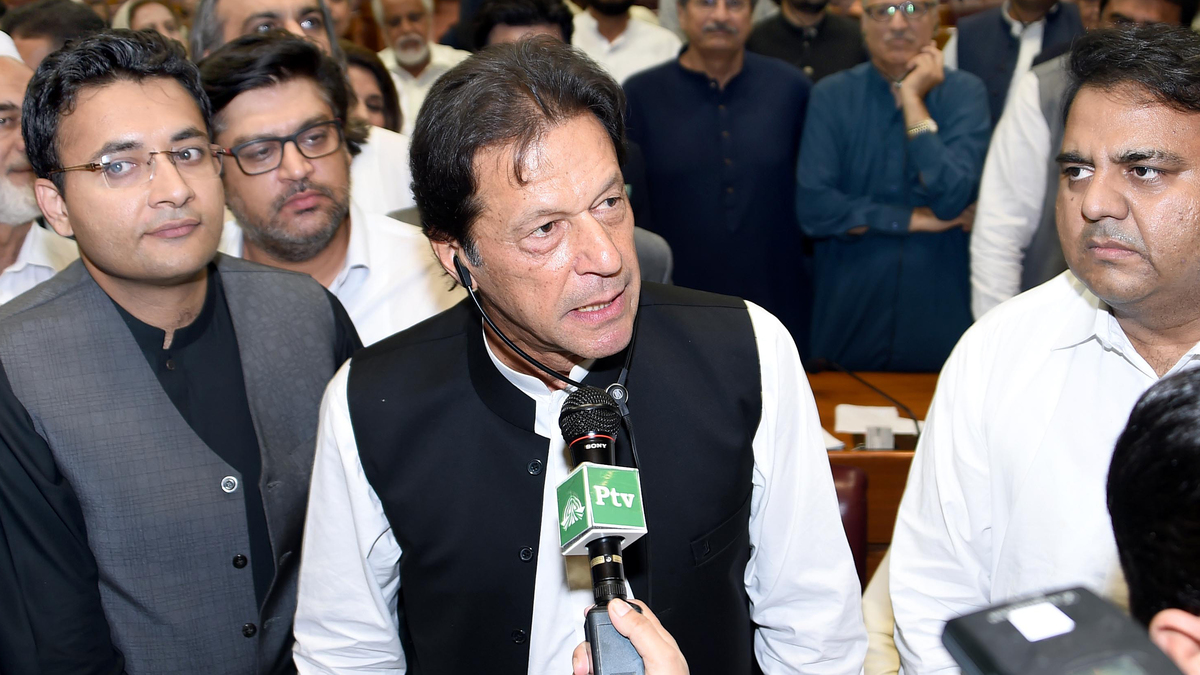 Former cricket star Imran Khan was sworn in as Pakistan's new prime minister on Saturday. One of his first challenges will be shoring up the country's economy.

Imran Khan was sworn in Saturday as Pakistan's new Prime Minister, ushering in a new era in the country. The legendary cricket star and international playboy turned politician was voted in with a slim majority – just 51 percent of the vote — and allegations of election meddling and voter irregularities.

In an emotional speech after the vote, Khan repeated a campaign theme of vowing to stamp out corruption. On Saturday Khan approved his cabinet, and appointed one of his top aides, Shireen Mazari, to minister designate of human rights.

She dismissed charges of fraud in the election results, telling NPR, "We have said that in whichever constituency that the opposition feels the results were tampered with they should go to the courts. We will not stop them....If we were being backed by the powerful, then why would our candidates win by 70 votes or 80 votes. Our candidates would have swept the election with huge margins of victory."

Mazari told NPR that Khan will deliver on his agenda, which she said "has consistently been one of justice, and of giving a level playing field to all citizens, especially the poorest of the poor. Giving them their basic human rights, and basically establishing Pakistan as a welfare state."

Khan ran on a populist platform, and promised to establish an Islamic welfare state to take care of the poor. However he has inherited many other challenges, the most pressing of which is the country's faltering economy.

According to The New York Times, "Pakistan's current account deficit stands at $18 billion, while its foreign-currency reserves are just $10.1 billion, enough to cover two months of imports."

Pakistan will likely have to rely on both the U.S. and China to help shore up its economy. The New York Times reports, "Just days after the election, China gave Pakistan a $2 billion loan to help shore up its finances, following $1 billion given by Chinese banks in April. And more money is needed, soon."

Over the next few weeks Pakistan is expected to begin negotiations with the International Monetary Fund, and ask for loans worth up to $12 billion, according to The New York Times.

Munir Akram is Pakistan's former ambassador to the United Nations, and tells NPR the US will have a big impact on these talks. "The US control of dollar transactions, the IMF, the banking system, that influence is going to remain. It has an inordinate impact on the global economy and on Pakistan's current situation, where its economy is faltering, where we have a balance of payments problem, where we may need to go back to the IMF," Munir continues, "I think the US influence will be exercised there. Whether it will be exercised positively or negatively remains to be seen."

Ties between the US and Pakistan have weakened in recent years, with the Trump administration cutting aid to Pakistan, citing the country as a safe haven for terrorists, and Secretary of State Mike Pompeo has warned that IMF money should not be used to pay off Chinese lenders to Pakistan.

Mazari says Khan's election will provide an opportunity for the US and Pakistan to reset relations. "So many of our leaders have had their own personal survival, and own personal interests, taking priority over national interests," Mazari told NPR, "Especially the military dictators we have had, for their survival in power, they allied with the U.S. at whatever cost, without any give or take, without any negotiation."

Khan she says, will demand reciprocity. "If the U.S. would like us to help and assist it, whether its war in Afghanistan, trying to bring peace there, or any other policy issue, then we also expect the U.S. to aid and assist us in our national priorities. We cannot have a state saying if you don't do xyz, we will suspend abc. That's not the way it works. There has to be respect and mutuality of interests," Mazari says. "If we do not have interests in common, if we do not respect each other, if we are not prepared to be reciprocal in our exchanges, then it will be very difficult to sustain the relationship, and that is one reason we have had ups and downs in our relationship with the U.S."

Mazari describes the U.S. as a destabilizing force in the region, through its support of India, and says the U.S. and Pakistan are not strategic allies, because they don't share strategic interests. She told NPR the U.S. doesn't "understand Pakistan."

"I think there is general discomfort with a strong Muslim state, especially one that has nuclear weapons," Mazari said.

China, however, is a stabilizing force and proven ally and partner according to Mazari. "You will not find Pakistan being concerned by the ongoing trade relationship between India and China, because we don't see that as a threat. We see China as a stabilizer in the region," Mazari said, "But the U.S. India relationship for us is a great concern, because it has a major military and nuclear dimension which directly impacts our nuclear deterrence. So this is the contrast between how the U.S. acts in South Asia, and how China acts in South Asia."

"Over the years we have seen China stand by Pakistan, in difficult times, not just bilaterally but also in international forums," Mazari told NPR. "So China has proven to be an ally and a partner, in times of difficulty, in times when we find ourselves without many friends externally."

Critics of China's Belt and Road Initiative say loans tied to these projects have lured Pakistan into a "Chinese debt trap." Akram says that's not the case, and that the interest rate on loans from China is low, "The average interest rate is 3 percent. The payback to China of those loans will not come online for at least 10 years. Past loans to China which we are going to service over the next five years, amount to around 600 million dollars, which is less than one-tenth of the amount that has to be paid back to western sources of debt that we have accumulated. So the Chinese burden that people talk about, the debt burden, is not there."

According to Foreign Policy, debts to China still present a long-term risk for Pakistan:

"Although China has not caused Pakistan's current economic turmoil, it seems likely that CPEC could spur the next crisis unless conditions change. According to a 2017 IMF assessment, debt service obligations to the Chinese state, banks, and firms are projected to grow gradually, peaking in 2025 at between about $3.4 billion and $4.5 billion. These estimates likely undervalue the full repayment obligations Pakistan will have under CPEC, as they do not seem to include tariffs for power generated by Chinese firms, toll fees for Chinese built roads, or maintenance and operation expenses."

Akram says he expects the relationship between China and Pakistan to continue grow, "The Chinese have indicated that they are quite accommodating of Pakistan's priorities...I will expect that the relationship will expand, will become more intense, and Chinese support for Pakistan's economy is more or less a given, as far as I see it."