Accessibility links
Once 'Ball Lightning' Gets Rolling, This Sci-Fi Mind-Bender Shines The novel is Chinese writer Cixin Liu's first in English since his "Remembrance of Earth's Past" trilogy. And that series' radical creativity returns in this tale of scientific striving — eventually.

Once 'Ball Lightning' Gets Rolling, This Sci-Fi Mind-Bender Shines

Once 'Ball Lightning' Gets Rolling, This Sci-Fi Mind-Bender Shines 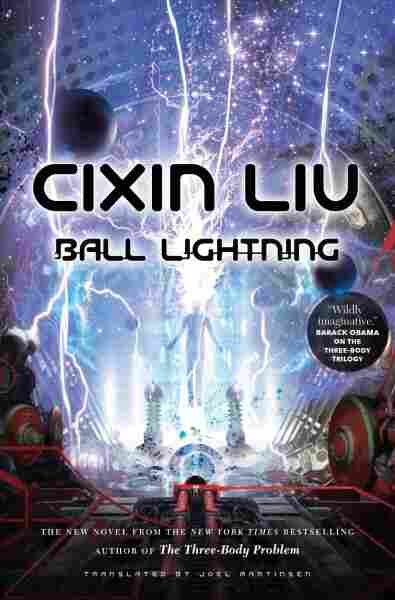 Somewhere deep in Siberia, a strungout Russian scientist has a little wisdom to offer.

Wedged into the cabin of a geriatric biplane, flanked by a pair of nervous new acquaintances, Dr. Alexander Gemow has been asked about the aircraft's fitness for flight. It's just sputtered to a halt on a snowbeaten tarmac — and while their drunk pilot has jogged it back to life, Gemow's fellow passengers understandably wonder what would happen if the ancient aircraft should die again, you know, after it takes off.

"In Siberia," comes his less than inspiring reply, "a one hundred percent guarantee isn't necessarily a good thing. Sometimes you fly all the way only to discover it would have been better to have fallen halfway."

The line arrives maybe a third of the way into Cixin Liu's Ball Lightning, the Chinese writer's first novel to reach an English-speaking audience since his "Remembrance of Earth's Past" trilogy. Despite its longer wait for a translation — in this case by Joel Martinsen, who has worked with Liu before — Ball Lightning was actually published in China a decade and a half ago, before the publication of that landmark sci-fi series. And though that three-book fever dream left your humble reviewer reeling, this time around I found myself fearing Gemow's words had a ring of prophecy.

Because for a while, the novel, like that old airplane, has some trouble catching flight. And I'll admit to wondering occasionally in the early going, while waiting for its momentum to build, whether it might have been better to bail halfway through.

The action primarily focuses on Gemow's anxious seatmates, narrator Dr. Chen and the military weapons developer Lin Yun, pursuing their single-minded strivings to understand and harness the elusive natural event that lends its name to the novel's title. Ball lightning is basically what it sounds like, at least according to current scientific understanding: a luminous sphere that has a tendency to form without warning around thunderstorms, dazzle (and potentially harm) its observers, and disappear just as mysteriously as it appeared.

And it's not just a product of Liu's fertile imagination. It's a real, if little understood, phenomenon.

In the book's opening pages, we meet Chen at the eerie moment that shaped his life: the birthday party at which the beautiful ball of death claimed both his parents' lives.

That eerie electromagnetic mcguffin gets this whole novel rolling (so to speak) in promising fashion, but it's a promise that takes a while for him to keep. As Chen embarks on his quest to comprehend his parents' killer — first in academia then through collaboration with the military — the reader must face some long, lonely stretches of apparently thin motivations, telegraphed plot twists and thickets of unexplained jargon so thick, it can be tough to find the other side.

But here's the thing: Don't be fooled by Gemow's bleak adage, the way I nearly was. This novel rewards commitment. Eventually, after the introduction of a few late-arriving characters, one of whom readers of the trilogy will recognize right away, Liu's own boundless creativity finds its footing. The wayward gears fall in line and the text shudders to life. Vivid, mind-bending life.

As the characters begin to unravel the novel's central mystery, experiment after experiment, their understanding of the world unravels with it. Chen and Lin set out toward their shared goal, the knowledge of ball lightning, following different paths — in his case, the pursuit of scientific growth; in hers, the desire for the perfect instrument of destruction.

But with every turn along their increasingly tortuous roads, the challenge becomes less about finding how to reconcile these divergent aims to each other. Rather, at some point, the painful puzzle is how to tell them apart at all.

"Any civilian technology can be put to military use. Likewise, any military technology can benefit the public," Chen's colleague tells him, pointing out that the distinction between the two sectors is far more permeable than one could imagine. Whether a grower or a destroyer, seekers of both varieties will find the moral ambivalence of their discoveries revealed eventually.

Or, as the colleague succinctly puts it: "The scalpel can kill, too."

But our intrepid heroes aren't the only ones destined to get their heads turned around here. Because Liu's uncommon gift is the ability to give recognizable shape to some of physics' most difficult concepts — ideas that explain the familiar world around us, but in ways so unfamiliar they seem radically foreign. With them he weaves a world of what-ifs, strung together with subatomic particles, quantum mechanics and the very building blocks of life, then he sets that world in motion and follows where it leads.

In other words, prepare for things to get weird — so weird, in fact, you may be inclined to sympathize with the random extra who at one point blurts out: "You look at the air and it seems so empty, not a crazy world like this!"

And that, in the end, makes the little irritations and leaps of logic well worth it. Therein rests the reward for seeing this thing through: the chance to see the world new.