Accessibility links
'Crazy Rich Asians' Author Kevin Kwan: 'It's Taken On A Whole Other Life' Kwan thought the screen adaptation of his best-selling novel might be a small, independent film. Instead, it has been hailed as a groundbreaking moment for Hollywood casting. Author Kevin Kwan is the executive producer of the film adaptation of his best-selling novel Crazy Rich Asians.

Around the time Kevin Kwan published his 2013 satirical novel Crazy Rich Asians, a producer reached out with an offer: "I will option this movie if you are willing to change Rachel to a white girl ..." Kwan recalls the producer saying.

Kwan didn't even bother to respond.

The film adaptation of Kwan's book is now out. All of the characters are Asian and Asian-American, and all of the actors are of Asian descent.

The romantic comedy is set in New York and Singapore. Kwan was born into a wealthy family in Singapore and Crazy Rich Asians draws on the extravagant lifestyles he observed as a child. Kwan moved to Texas with his parents when he was 11.

"I grew up very lucky, very pampered, but in no way like some of my classmates or even some of my cousins," he says. "So it was a world I witnessed and was taken out of." 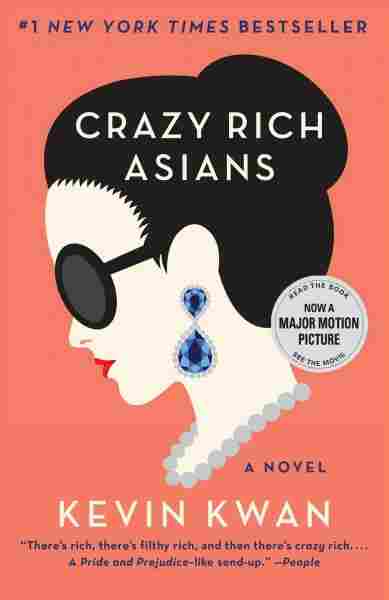 On his own family's wealth

I came from a family of extremely old money, and so by the time I was born there was really just a trickle of money left. So while we had all the privilege, we didn't have the same spoils that, you know, "Crazy Rich Asians" would have today. So by comparison, I think I led a privileged, lucky life but it wasn't as extreme as what would be depicted in the movies. ... It's something that's extremely hard to articulate. ... I think you've been trained almost from birth ... this is something to never be talked about.

On his family's house in Singapore

It was a very multigenerational family compound. It was a world of beauty that I think I really took for granted as a child. ... It was on top of a hill and it had a beautiful panoramic view of kind of Singapore ... so we got the breezes, and I remember from my bedroom, from my bed, I would always look out and just see for miles. I would see first other houses in the neighborhood, and then a highway, and then a hill on the other side of the highway, and this lone tree, this beautiful gigantic mountain tree, which I don't think you have used like that anymore.

On meeting new people through his journalist aunt

I think I was always, even as a child, just fascinated by the world around me and I was very much a fly on the wall observing things. I was always fascinated by the stories that my grandparents had told me. Then through my aunt, who also lived in the house, she introduced me to her world and she was part of this Bohemian set of privileged Singaporeans who were artists and sculptors and collectors and writers. She was a journalist ... and she pulled me into that world.

Every Sunday she hosted a lunch and after church ... she always had the most fascinating people with her at her lunches: Thai princesses, businessmen that have been around since the '30s and '40s, things like that, art collectors. That was my exposure to that world. So when I was taken out of that world and transplanted to Houston, that was the world I missed, and that was the world I craved.

When it played in Singapore probably back in the late '70s at some point, it was a family event. I remember my mother [hosted] a whole viewing party around it and we were sat down in front of the TV and made to watch this important film, Flower Drum Song, and everyone was so proud that cousin Nancy was one of the stars of the movie. .... I had not met her before, she was already living in the States at that time and so I didn't meet her until I was much older, but it's interesting that even in Singapore, this was probably 15 to 20 years after the movie had come out, it still was a seminal movie, even for Singaporeans.

On the criticism Crazy Rich Asians received because Henry Golding, who plays Nick Young, is half-Asian and half-British

For so long Asians in America have been so underrepresented in media, so whenever there's a chance — whenever there's that rare comet of a chance — people are so invested in every aspect of this being perfect and being right. Unfortunately, this movie cannot be everything for everyone. And I see and I feel the pain and I completely understand the arguments that people were trying to make, but it's ironic that these people are demanding sort of blood purity in a way — that if he's not 100 percent Chinese he's not qualified to play the role of Nicholas Young — when really Nicholas Young himself as the character isn't 100 percent Chinese.

Then there's the other question of actual fairness in how this industry works, because when you look like an actor like Brad Pitt, for example, he can play an Irishman, a Czech, a German, a Native American, he can play really whatever he wants without anyone being up in arms about it, so why can't someone like Henry Golding, who is half-Asian but has grown up, spent most of his life in Asia, is very much an Asian man, why does he have to justify playing an Asian role? ...

The other thing — it becomes so subjective. What is an "Asian face"? Because when you go to China and you look at people from province to province, I mean, the vast array of facial structures and the size of your eyes or the size of your nose. ... I think it's a very limited view to think that there's only one representation of an Asian face, and it should be a Han Chinese descendant type person with a nose that is this many millimeters broad, or whatever it is.

Korea has become the plastic surgery capital of the world where all these young men especially are transforming their faces into that ... very plastic-looking K-pop singer look. I also I have been through my own journey of acceptance of how I look. ... I mean, several people in my family had suggested that I should get the double eyelid surgery. ... And I said, "Why would I do that? I like my eyes. I don't feel like I need to have more Western-looking eyes, or what's perceived as Western."

On a producer offering to option Crazy Rich Asians if the female lead, Rachel, was played by a white woman

This was back in 2013. So this was way before the whole Hollywood whitewashing movement began, before all the waves of outrage that happened — justifiably so, with the casting of Scarlett Johansson in Ghost in the Shell, things like that. So it was early days yet, and I knew that this movie would be a challenge because I knew it needed an all-Asian cast, and so I knew that a lot of traditional Hollywood would find it to be not a viable project, and so that's why I chose to go the team that I did. We thought we would really produce this outside of the studio system and it would be an independent film. ... It's taken on a whole other life that I never dreamed was possible.

Heidi Saman and Seth Kelley produced and edited this interview for broadcast. Molly Seavy-Nesper and Beth Novey adapted it for the Web.