Accessibility links
Minorities In Germany Are Sounding Off Against Racism With #MeTwo Hashtag After a German soccer player of Turkish descent was criticized during the World Cup, other minorities in Germany have been speaking out about racism.

Listen · 4:32 4:32
Minorities In Germany Are Sounding Off Against Racism With #MeTwo Hashtag 4:32 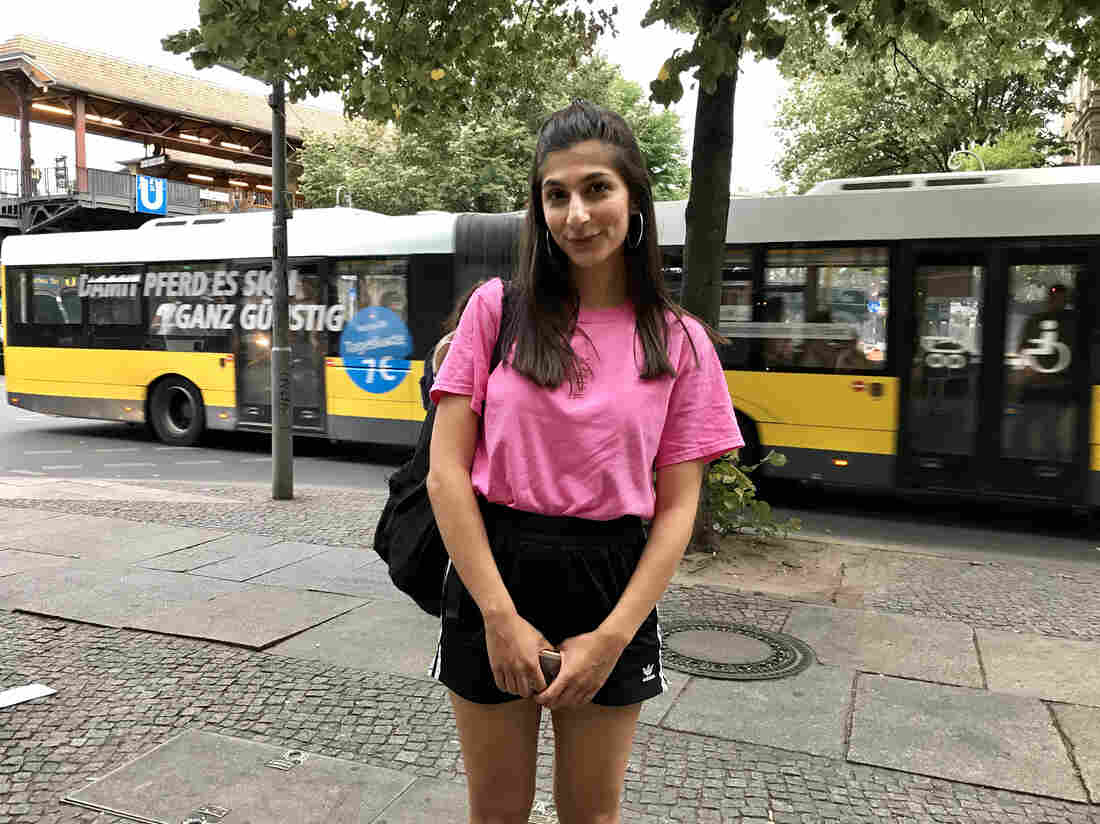 Miriam Davoudvandi, 26, is one of many Germans who took to Twitter to share her experiences of racism starting as early as elementary school. Davoudvandi's teachers doubted her language abilities. Today she is the editor-in-chief of a hip-hop magazine and is fluent in five languages. Esme Nicholson/NPR hide caption 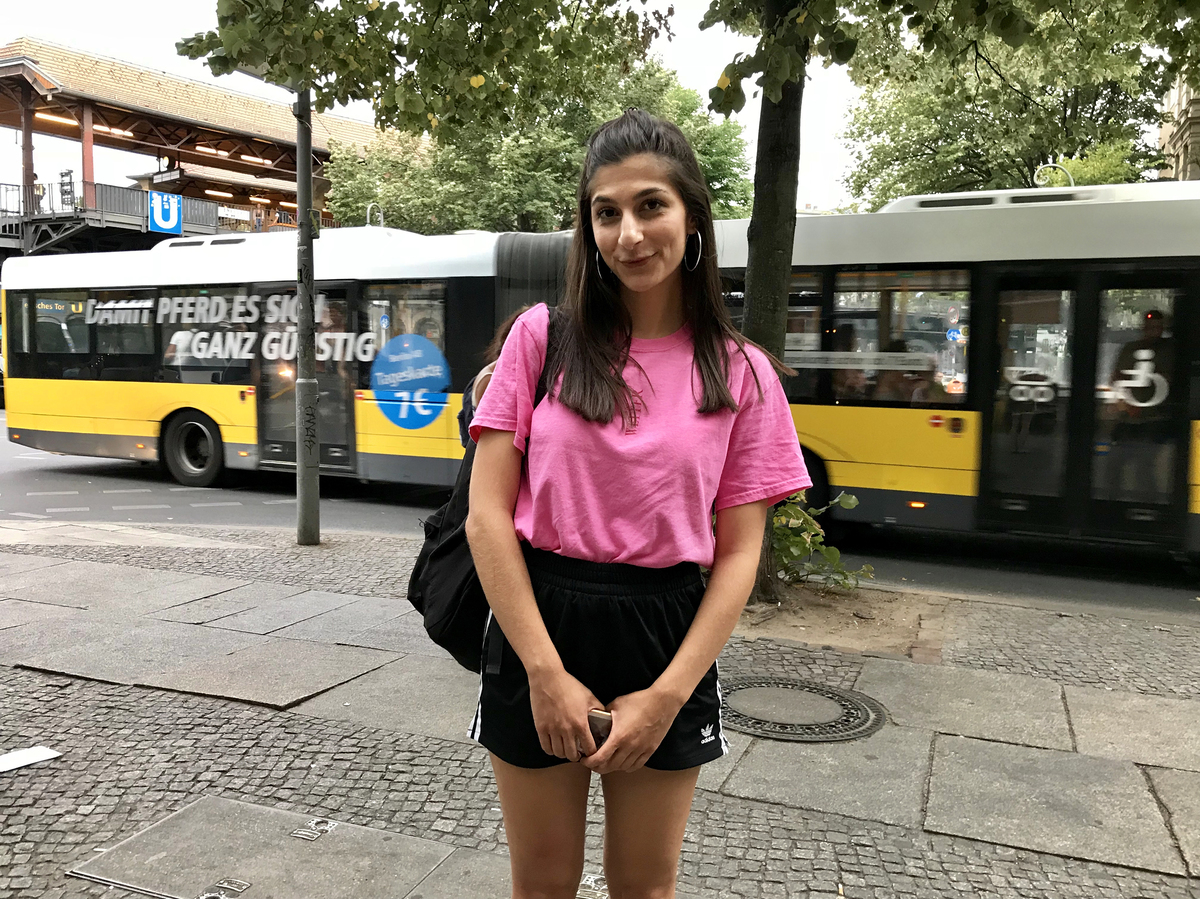 Miriam Davoudvandi, 26, is one of many Germans who took to Twitter to share her experiences of racism starting as early as elementary school. Davoudvandi's teachers doubted her language abilities. Today she is the editor-in-chief of a hip-hop magazine and is fluent in five languages.

It's early evening at a Berlin bar where the hip, young, startup crowd sips artisanal gin cocktails. Miriam Davoudvandi is among them and feels right at home — until the bar tender asks her where she's really from.

Davoudvandi, 26, was born in Bucharest, to an Iranian father and Romanian mother, but she's been living in Germany since she was 6.   She says that she's felt degraded for her diverse background since elementary school.

"I was a good student and thought that kids with good grades like me end up progressing to the more academic high school," she says. "But my teacher said I'd be better off among my 'own sort' at a more vocational school."

"Own sort," she believes, meant anybody with what many here consider as having a "migration background." The label is widely used to describe foreign-born Germans or Germans who were born here, but who have at least one parent of another nationality.

She is one of many from minority communities in Germany who have taken to Twitter to share her #MeTwo story.

That's not a typo. You've probably heard about #MeToo — the movement against sexual harassment — since it took off in social and traditional media last year. In Germany, it has evolved into something new, and is embraced by another group that feels discriminated against. #MeTwo is giving a voice to the first, second, third and fourth generations of immigrant families in Germany. "Two," instead of "too," refers to a sense of having multiple identities.

The #MeTwo hashtag went viral after soccer player Mesut Özil resigned from Germany's national team in July. Özil — born in Germany to Turkish parents — accused the German Football Association of "racism and disrespect," saying, "I am German when we win, an immigrant when we lose."

Now, minorities are using #MeTwo on social media to share their experiences of everyday prejudice and racism. Many tweets describe discrimination starting as early as elementary school, often coming from teachers.

Davoudvandi says her parents ignored the elementary school teacher's "advice" and she went to the more academic school, and then to university. But she says she faces the same discrimination 20 years later.

"I've been looking for an apartment for months without hearing back from any landlords," Davoudvandi says. "So my boyfriend and I decided to look for one together. He's German and blond with the 'right' kind of name, and lo and behold, we got five offers in no time at all."

Meike Bonefeld, who researches psychology at the University of Mannheim, says that if the country wants to tackle racism, it has to start at school. And she says it's the teachers who are in need of education.

Her latest research looks at the behavior of trainee teachers who were tasked with grading tests.

"Our study showed that students with foreign names were given lower grades than students with German names, even if they made the same number of mistakes," Bonefeld says of the study she co-authored and published in May.

She says this bias, which has also shown up in previous studies, is causing long-term damage.

Students with foreign names were given lower grades than students with German names, even if they made the same number of mistakes.

At a playground in central Berlin, a group of children are making the most of their summer freedom before school starts again. One elementary school teacher here says these kids could be in for very different experiences at school. She spoke to NPR on the condition of anonymity for fear of losing her job.

"I have colleagues who stigmatize pupils of Arab or Turkish descent without even getting to know them, lowering the children's expectations about what they can achieve," she says.

She says that the official school policy of inclusion is far from a reality. "Some teachers complain if kids with non-German names are assigned to their classes," she says. "More often than not, more tolerant colleagues end up teaching the students the others don't want."

I don't believe racism is widespread among teachers in Germany. These are one-offs.

While Berlin's city education authorities wouldn't comment, the president of Germany's Teachers' Association, Hans-Peter Meidinger, acknowledges there are problems. "The #MeTwo debate is definitely a sign that schools need to take a long, hard look at themselves," Meidinger says. "But I don't believe racism is widespread among teachers in Germany. These are one-offs."

But figures suggest these are not isolated incidents. Bonefeld from the University of Mannheim says 19 to 32 percent of Germans with a "migrant background" are encouraged to go to a more academic high school, compared with 45 percent of Germans whose parents were born in the country.

Meidinger, who is also a school principal, says there's good reason for this disparity. "I've often recommended that students with immigrant backgrounds might be better off at another school, one with lower academic standards where foreign languages are not on the syllabus. They already have to contend with the German language on top of their mother tongue." he says. Meidinger adds "this isn't discrimination but an attempt to offer the best opportunities."

Back at the bar in the Berlin borough of Kreuzberg, Davoudvandi describes hearing the same argument when she was younger. "A high school teacher said I'd never be a grade A student because German is not my mother tongue. Now I'm an editor-in-chief of a magazine — proof enough of my German skills."

Davoudvandi is fluent in five languages, but says she was lucky. She warns that unless more people start to call out the de facto segregation in schools, racism will thrive instead of Germany's school kids.