Accessibility links
'Coyote Doggirl' Is A Childlike Western With Hidden Depths Artist Lisa Hanawalt creates kids' stories for grownups, both on TV — she's the production designer for BoJack Horseman — and in her new book Coyote Doggirl, a candy-colored Western saga. 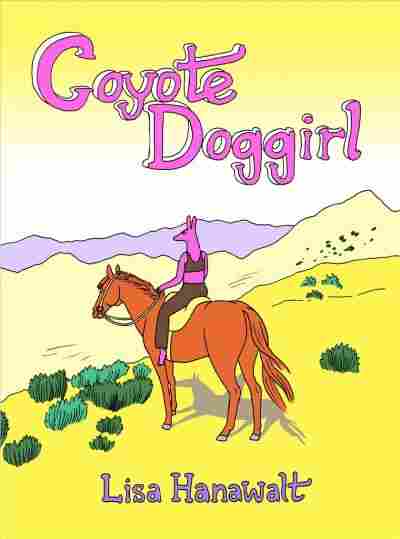 Lisa Hanawalt creates kids' stories for grownups. She's the producer and production designer for Netflix's animated BoJack Horseman, in which talking animals intermix with humans, and she's authored graphic novels like 2016's Hot Dog Taste Test and her new release, Coyote Doggirl. In Hot Dog Taste Test, Hanawalt looks at food from the perspective of a kid peering up over the table's edge, imagining all sorts of weird culinary combinations and just as ready to play with an appetizer as eat it. In "How to Choose a Wine," she recommends one vintage that, she says, "makes you ask strangers for piggy-back rides."

Hanawalt's view of life is perfectly represented by one of BoJack's funniest characters, Vincent Adultman. He's actually a kid standing on two other kids' shoulders, wearing a full-length raincoat and fedora. Hanawalt knows that at some level we're all a bit like Adultman: children wrapped in grown-up clothes.

So it's no surprise that Coyote Doggirl feels like a kids' book. Hanawalt turns the Western genre into a shared joke, giving its too-serious elements an absurdist spin. Instead of being a bitter, stoical figure, the heroine — a pink-skinned, canine-headed person — is mostly just goofy. She talks to her horse a lot, thus answering the question of what cowpokes occupy their minds with during all those lonely hours on the trail. "I am only controlling you in theory," she tells the animal. "My trusty steed! My friend! ... You make me feel special ... We are a team! We are family. This is a symbiotic thing."

Coyote Doggirl looks like a kids' book, too. The heroine rides through a landscape far more varied and colorful than those of movie Westerns. This is not the starved, ruthless desert of Sam Peckinpah and Sergio Leone. Working in radiant watercolors, Hanawalt indulges unabashedly in bright, friendly hues. Her approach to color is sweetly artless: Trees are green and water is blue (most of the time) but the ground and sky are sometimes bright pink and sometimes bright yellow and sometimes lavender, just because Hanawalt thinks it's pretty. The effect is naïve, but deceptively so. If you think for a moment about the care, skill and patience it took to layer in each page's varied tones, you can see how seriously Hanawalt takes her project.

There is magic sometimes in Hanawalt's desert, and naughtiness sometimes. (Hanawalt jokes about genitals the way kids do, as if hardly able to believe such strange appendages exist.) There's also a secret, one that becomes darker and more urgent as the book goes on. Why is Doggirl riding across the desert at all, instead of safe at home? This question perplexes the wolf tribe that shelters her after somewhat arbitrarily shooting her full of arrows. "Why was I attacked?" Doggirl asks them woozily, as she's carried half-conscious to their camp. "We thought you were going to steal our shit," the head wolf says. Why, then, did they turn around and save her? "I like your top," another wolf explains. "Yeah, it's cute," a third concurs.

We may sometimes feel as childish as Doggirl does, but our grownup problems will follow us across any desert.

It's all ridiculous and delightful until the truth of Doggirl's circumstances intrudes: She's fleeing a murderous posse in the wake of a terrible violation. At the moment of this revelation, and again when Doggirl must kill a horse with a broken leg, Hanawalt changes gears brusquely. The evil realities of adult life, kept offscreen until now, suddenly force their way in.

It's a necessary shift in tone, one that makes Coyote Doggirl a book for grownups with a grownup message. For all her whimsy, Hanawalt knows being an adult is more than a matter of dressing up in a long coat, Adultman-style. We may sometimes feel as childish as Doggirl does, but our grownup problems will follow us across any desert.

Even so, that desert doesn't have to be cheerless. Doggirl may have problems, but she — and Hanawalt — don't let them get her down for long. In the end, Hanawalt believes, the colors of our individual landscapes are up to us to draw.