Accessibility links
More Than 400 Have Called Pennsylvania's Hotline Since Clergy Sex Abuse Report State investigators are listening to all the new calls of horrific abuse and say they are committed to vetting and pursuing them as far as the law will allow. 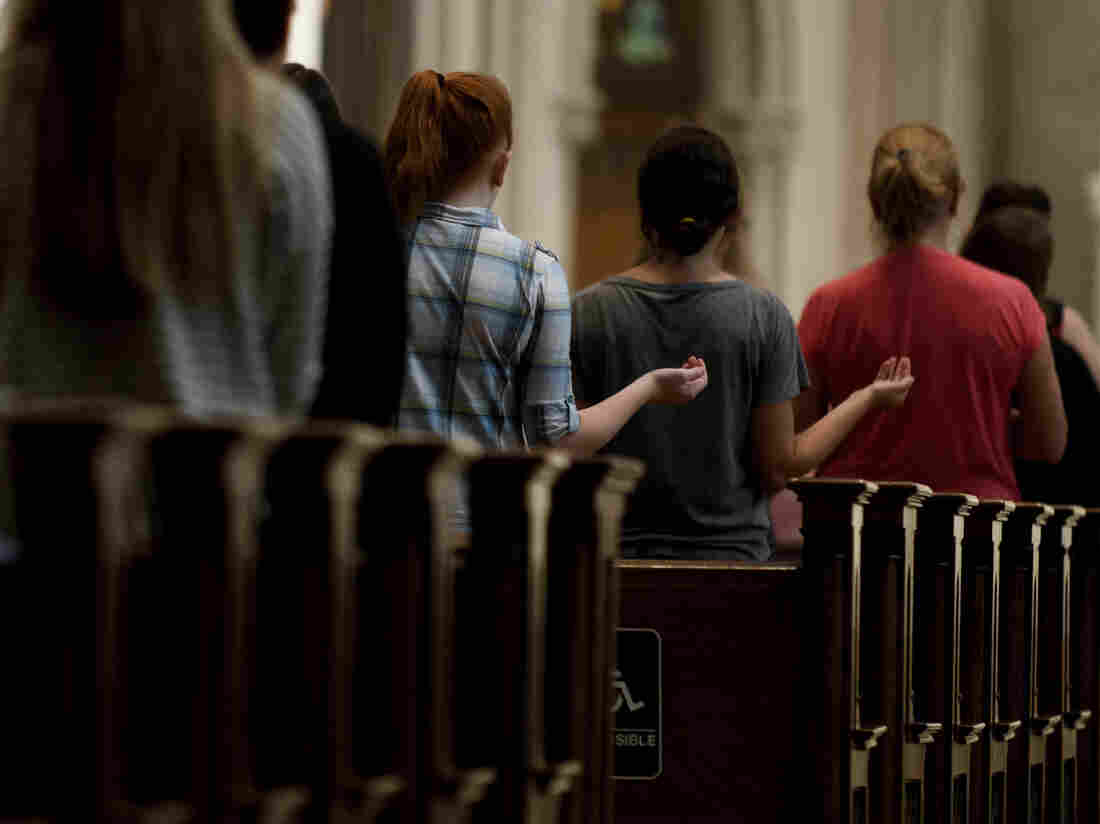 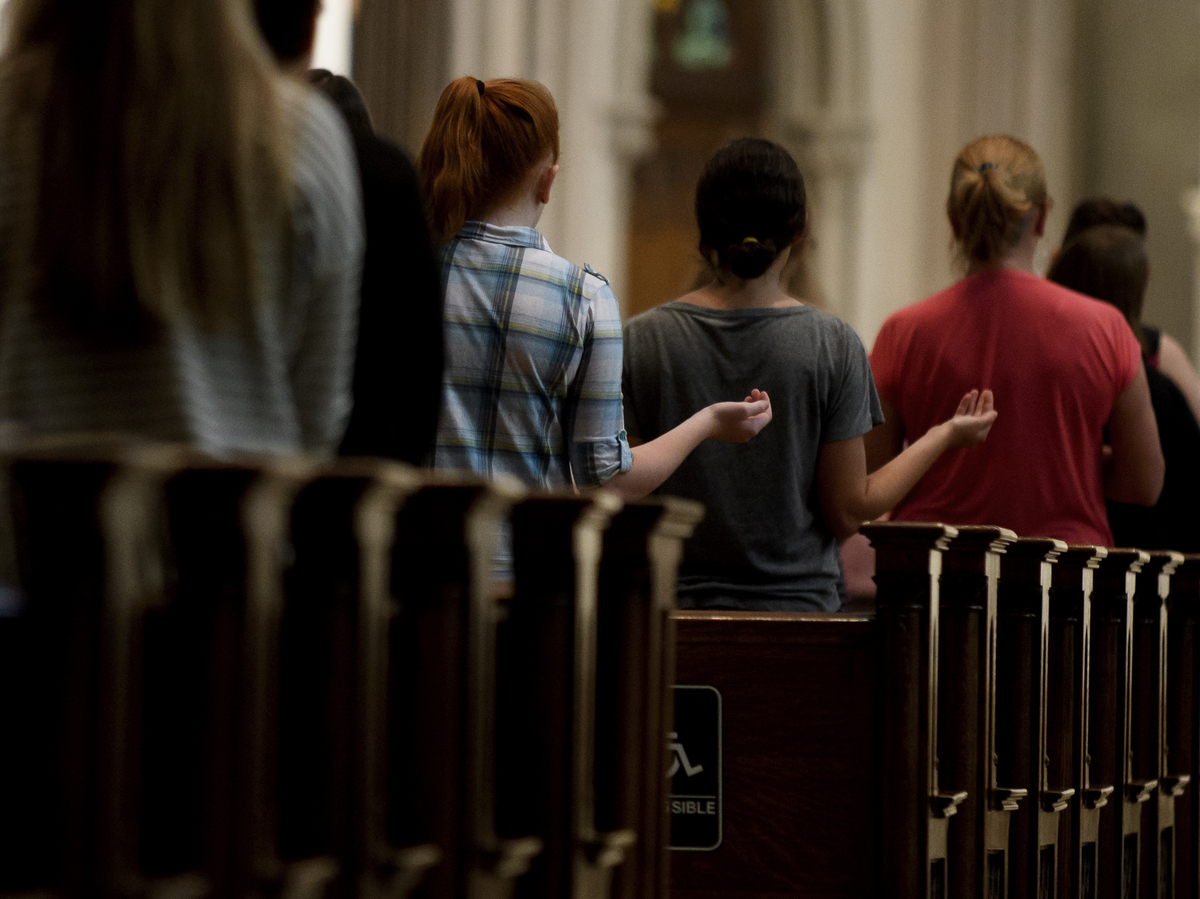 Pennsylvania Attorney General Josh Shapiro was wrapping up his livestreamed address in Harrisburg last week, on the release of a bombshell grand jury report cataloging how the Catholic Church covered up the abuse of more than 1,000 minors by some 300 priests over 70 years, when he made an appeal: We want more survivors to report.

"If you are listening to this news conference, and you know of sexual abuse being committed by a priest or a member of clergy against yourself, or anyone else, please call us," Shapiro implored viewers.

Since then, according to Pennsylvania officials, a cascade of more than 400 calls has rolled in to the clergy-abuse hotline.

The attorney general's office has been scrambling to keep up, pulling in specially trained investigators from other departments to handle the deluge, according to Joe Grace, a spokesman for Shapiro.

"We've deployed agents from our child predator section and brought them over to answer and respond to these calls that are coming in to the hotline," said Grace, noting that the surge in calls is the largest officials have seen since the hotline was launched two years ago.

Have You Left The Catholic Church?

The nearly 900-page searing grand jury report has not just reawakened the stories of people from Pennsylvania. In San Francisco, Melanie Sakoda with the Survivors Network of Those Abused by Priests said the report produced a measurable uptick in call volume to the group's national hotline.

"Were we prepared for it? No," Sakoda said. "We've been caught a little bit short-handed."

Usually, the group's hotline receives a handful of calls a day. Shortly after the grand jury report, Sakoda was trying to respond to some 22 calls — and that was just the morning's volume.

Sakoda said that some of the callers are concerned Catholics looking for ways to help. Others are survivors or family members of survivors of sexual assault who have been shaken by some of the priests' names in the report.

For many of the callers, justice in Pennsylvania is out of reach.

Laws in Pennsylvania bar anyone over the age of 30 from filing a civil lawsuit against a child sex abuser. And a criminal case involving child sex abuse must be started before the victim is 50 years old.

According to University of Pennsylvania professor Marci Hamilton, those are some of the most outdated child-abuse laws in the country. Her advocacy group called Child USA has found that the average age of someone coming forward to report child abuse is 52.

"For the state of Pennsylvania to be stuck on an age limit on being able to press charges is unusual at this point and puts them definitely in the minority," Hamilton said.

Sometimes, the problem has nothing to do with an old abuse case being legally expired. Some abusers have died, or victims are unable to testify, making it impossible for prosecutors to assemble a criminal case.

Yet for some of those picking up the phone, a remedy in the court system is not the end goal. Hamilton said talking to someone about early childhood abuse can be cathartic and can help a survivor advance beyond it. But she said the experience of talking about it with a stranger can cut the other way, too.

"Well now they have to make a decision, 'Do I tell my wife? Do I tell my children? Do I now talk to the media like the other survivors are doing?' " Hamilton said.

State investigators, Hamilton said, may be limited in their ability to assist someone in processing the full depth of this kind of trauma.

"So it is a very difficult thing to decide to do. And it can be extremely stressful, and it can bring on some of the demons that have visited them because of the abuse," she said.

Hamilton's research has shown that about a third of abused minors speak up about their attacks as kids, a third disclose the abuse as adults, and the remainder remain silent about what happened, figuring it to be the fastest way to move on.

"We have many victims that sit in the wings and that don't say anything," Hamilton said.

Joe Grace, with the Pennsylvania attorney general's office, said he hopes many of those whose cases remain unknown will step forward. After all, cases generated from the 2-year-old clergy-abuse hotline helped to shape the nearly 900 pages of grand jury findings. And investigators are listening to all the new calls of horrific abuse and committing to vetting each one and pursuing them as far as the law will allow.

"They're recording facts," Grace said of the state agents on the other side of the phone calls. "And then decisions will be made – and are being made – to investigate further where it is appropriate."

Although it is a sweeping document, Hamilton described the enormous grand jury report as an "outline of abuse," far from a comprehensive probe into each incident.

"It's not what you get when you are actually capable of getting into the legal justice system," she said.