Accessibility links
Tiny House In The Florida Keys Brings Hope To A Workforce Still Displaced Nearly a year after Hurricane Irma, Florida Keys workers who prop up its tourist economy are still struggling to find affordable housing for residents displaced by the storm. 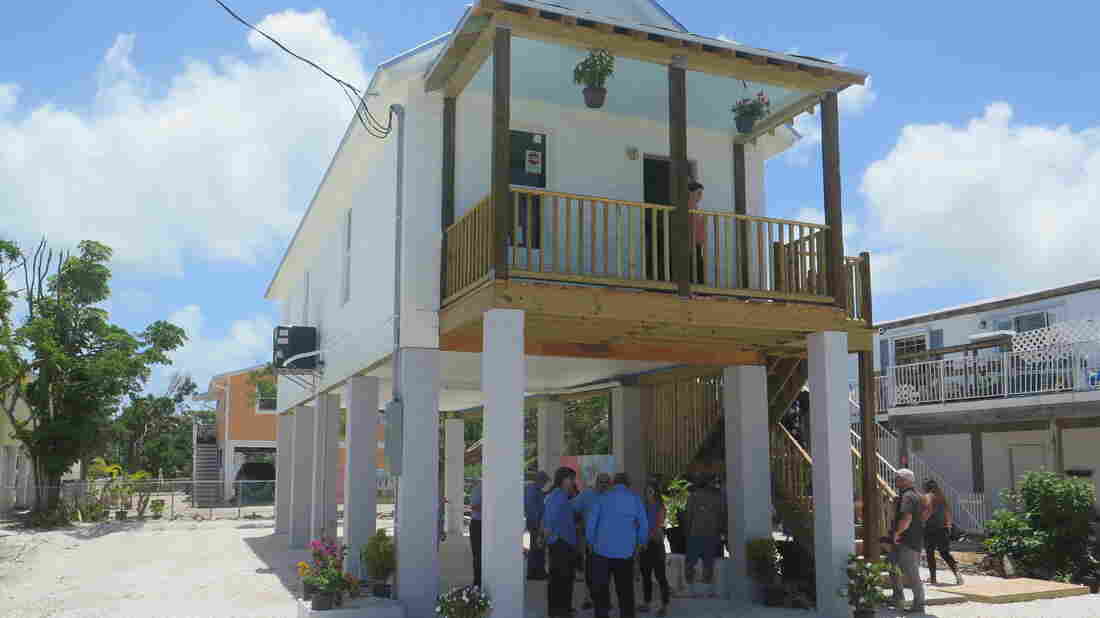 This 760 square-foot cottage, elevated and built to FEMA standards, is one of several planned homes that will serve as workforce housing in the Florida Keys. Greg Allen/NPR hide caption 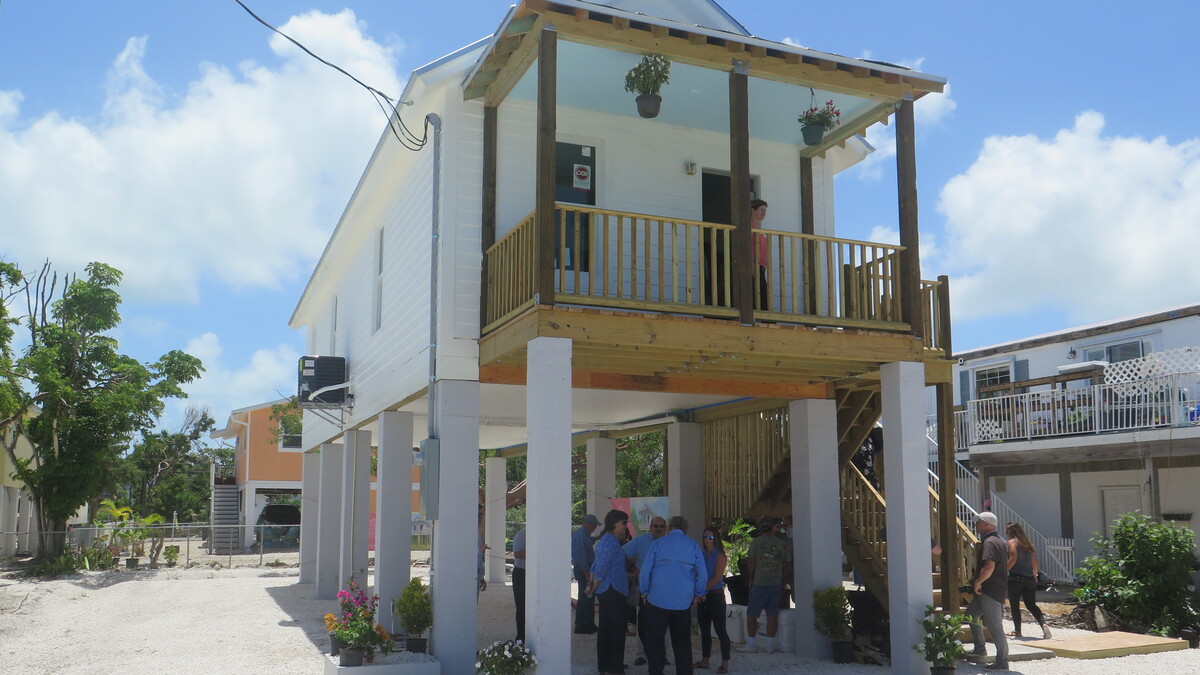 This 760 square-foot cottage, elevated and built to FEMA standards, is one of several planned homes that will serve as workforce housing in the Florida Keys.

Nearly one year after Irma slammed into the Florida Keys, workers who prop up the community's tourism industry are still struggling to find housing. Thousands of homes were destroyed in the storm, driving up the cost of housing on an island chain that's long been one of Florida's most expensive places to live.

After months of work, there are now a few projects underway. With $2 million in help from Monroe County, a private developer is soon breaking ground on a 200-unit workforce housing complex near Key West.

And last week, a new group, the Florida Keys Community Land Trust held a ribbon cutting for its first project. It's a small, 760-square-foot cottage, elevated and built to FEMA standards. It's one of several planned homes that will serve as workforce housing. Rent will be capped at about a third of each household's income. Maggie Whitcomb, one of the Land Trust's founders says, the houses will enable a family to "save, to vacation, to live without working two jobs, three jobs."

Rebecca White, who works with clients in the Keys to find affordable housing, says every new project makes a difference. "Seeing projects like this and other projects, she says "is really a relief for a lot of those people. Its giving them hope that, 'Oh, I might find a house sometime soon that I could afford to rent.'"

Irma made landfall about 10 miles from the mobile home on Big Pine Key where 55-year-old Christine King was living. She evacuated during the storm and is glad she did. A several-foot-high storm surge swept through her neighborhood. "It just washed everything away," she said. "And the roof came off, a couple of walls fell down. And so it was pretty well demolished."

King is living temporarily in a FEMA trailer while she tries to figure out how to rebuild. Mobile homes like hers are no longer allowed in the Keys and building a new home would cost $200,000 or $300,000 — money she doesn't have. Despite all that, King, with true Keys spirit, is smiling. She explains why. "They had come through my house with cadaver dogs looking for dead people," she says, laughing. "They found zero dead. That zero was me."

There are thousands like King in the Keys, people washed out of their old homes and still looking for a new place to live. George Nugent, a commissioner in Monroe County, says, housing has been the hardest part of recovery. "And affordable housing, affordable workforce housing is the key."

Since the storm, bartenders, fishing guides, hotel clerks and others vital to the Keys' tourist economy have been priced out of the housing market. "For example, you cannot find a two-bedroom, two-bath house for less than $2,500 a month here," he said. "And people working in the lodging industry and the hospitality industry just don't make enough money. You almost have to make $100,000 a year to make ends meet."

Without an affordable place to stay, many who were renting have simply left the islands and gone elsewhere. Nugent says the county is studying the issue, but he believes that since Irma, there's been a 10 to 15 percent decline in the population here.

One factor is the high cost of land. In part, because of environmental restrictions to protect endangered wildlife, only a small number of new building permits are issued each year, driving up real estate prices. Stephanie Kaple says another challenge is the high cost of construction. Kaple heads the Monroe County Long Term Recovery Group, a coalition of non-profits all working on the housing issue. "We are a chain of 137 miles of islands. It's a lot of bridges," she says. "We don't have some of the same things that others do. There's limited resources for us. We're working on a big project now to get volunteer housing developed. Because groups want to come help, and we don't even have a place to put them."