Accessibility links
Michael Cohen, Paul Manafort's Guilt And What It Means For Trump The two high-profile people close to President Trump were either found guilty or pleaded guilty to multiple federal crimes — and one implicated the president in a major campaign finance violation. 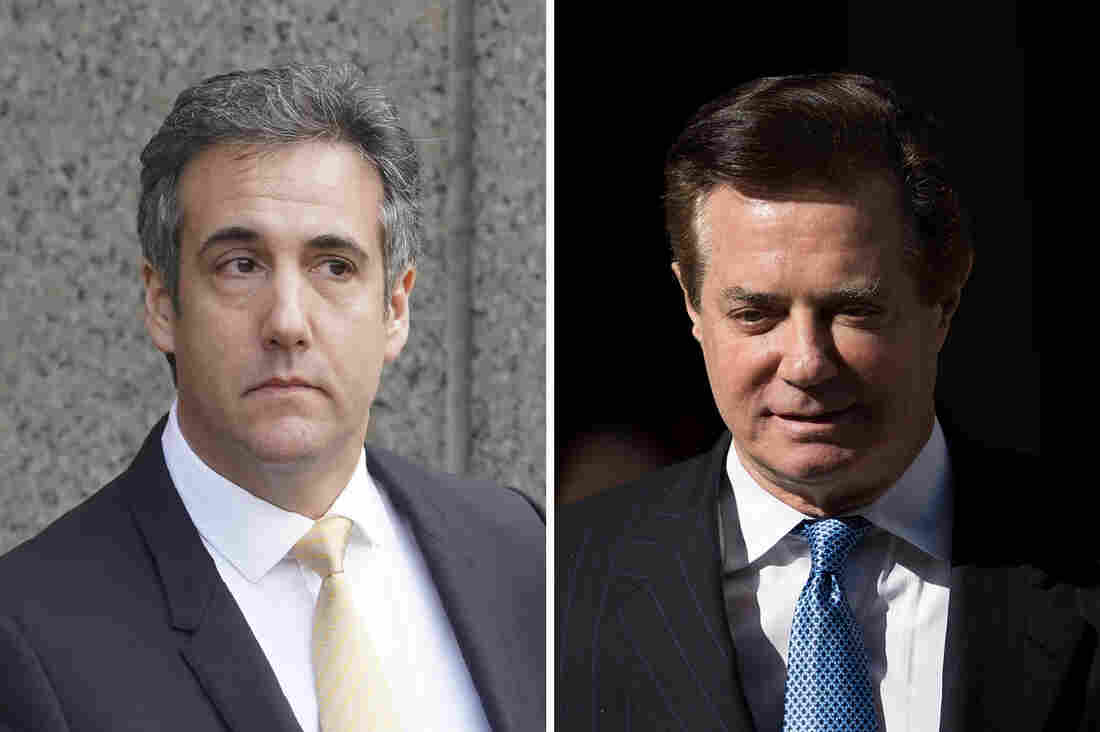 The two high-profile people close to President Trump, Michael Cohen (left) and Paul Manafort, were either found guilty or pleaded guilty to multiple federal crimes Tuesday. It was the closest Trump has been tied to potentially criminal acts as president. Don Emmert/AFP and Drew Angerer/Getty Images hide caption 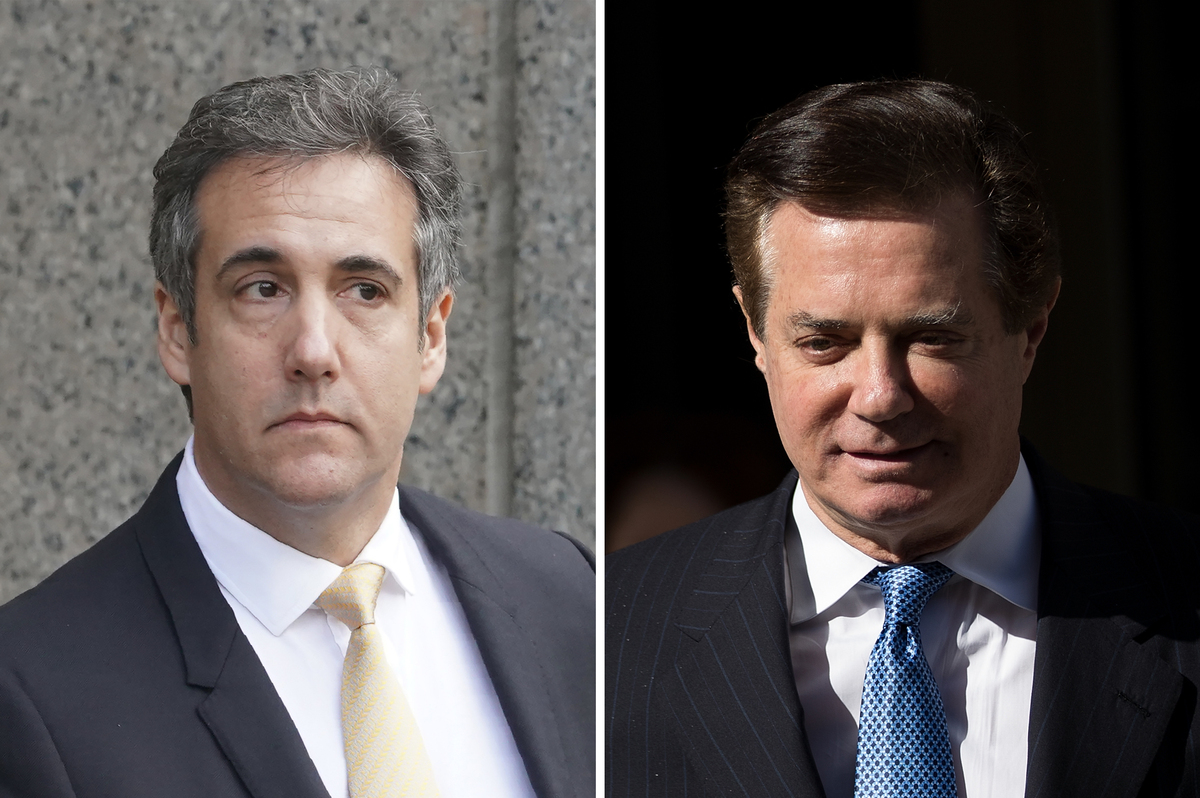 The two high-profile people close to President Trump, Michael Cohen (left) and Paul Manafort, were either found guilty or pleaded guilty to multiple federal crimes Tuesday. It was the closest Trump has been tied to potentially criminal acts as president.

In a split-screen whiplash, a regular Tuesday turned into a blockbuster, with two top people close to President Trump now facing prison.

The kicker was that Cohen said he made those unlawful contributions — intended to silence women who had dirt on Trump — at the president's behest.

So what should be made of Tuesday's developments? Here are six takeaways:

1. This was a remarkable and potentially consequential day in the Trump presidency

Step back for a moment: The president's personal lawyer pleaded guilty. His campaign chairman was convicted. In addition to a lesson in the company we keep, what came of those felony pleas and convictions was the closest Trump has been tied to something potentially criminal as president.

2. It proves the danger of the Mueller investigation for Trump

Because of the broad mandate and authority of special counsel Robert Mueller's Russia probe, it could go virtually anywhere. None of the charges Tuesday has to do directly with Russia. Yes, Manafort owes Russian oligarchs money, but that is as close as it got. (Prosecutors weren't even allowed to use the word "oligarch" during the trial.)

Neither case had anything to do with Russian collusion or interference in the 2016 campaign.

And yet, here we are. It goes to show that even if the two main tracks — collusion and obstruction — don't get proved, when you start turning over rocks, you find worms. For example, look where independent counsel Ken Starr's investigation of President Clinton started in the 1990s (a bad land deal) and ended up (the president's sex life). There's no telling where Mueller's investigations might lead.

3. In the Trump era, clear, incontrovertible evidence is the key to proving guilt or innocence — and winning public opinion

There are so many unreliable narrators all around — Cohen is hardly believable, Manafort was convicted of multiple counts of fraud, and Trump has spouted a record number of falsehoods, at a pace of nearly eight per day since becoming president.

So, it is safe to say that when trying to prove a shared, independently verifiable truth, there better be proof. Really solid proof — such as documents and recordings.

And, there are tapes — lots of them. Remember, the feds still have all of Cohen's recordings and documents that they seized during their raids on his home, hotel room and office. Having that kind of incontrovertible evidence is key, especially in this time when "truth isn't truth."

4. Is there another shoe to drop soon?

Rudy Giuliani, the president's outside legal counsel, has claimed that there is a Sept. 1 deadline for Mueller to wrap up his investigation to "keep us clear of the election." Well, that's not true. But there are guidelines at the Justice Department that state: "No employee may use his official authority or influence to interfere with or affect the result of an election."

Some have interpreted that over the years to mean that there is an "unwritten" 60-day rule, an arbitrary amount of time that seems clear of an election. (Sixty days from Election Day, Nov. 6, would be Sept. 7.) While there might not be an official hard-and-fast date, Mueller is likely sensitive to avoiding any appearance of interfering in the midterms. He certainly would not want to put his investigation and investigators in the same position as former FBI Director James Comey during the 2016 election.

So, were Tuesday's events foreshadowing what comes in the next couple of weeks before the election campaign kicks into high gear?

5. This adds to the Democrats' scandal push

No matter how Trump tries to spin it — calling the investigation a "witch hunt" or Manafort a "good man" (at a West Virginia rally where chants of "Lock her up!" could be heard) — the conviction and Cohen's guilty plea are black eyes for the president. They add to Democrats' narrative that in the midterms, they are running against a scandal-plagued administration and party — something that helped them take back the House in 2006.

A case in point is Elizabeth Warren, the Massachusetts senator and possible 2020 presidential candidate, who unveiled an anti-corruption platform on Tuesday. She said the Trump era "has given us the most nakedly corrupt leadership this nation has seen in our lifetimes."

Democrats are also running an ad targeting Republican scandals that pulls no punches. And, amid the Manafort-Cohen news, the Justice Department announced charges against Republican Congressman Duncan Hunter of California and his wife for spending $250,000 of campaign money on family trips to Italy, Hawaii and Las Vegas, and for personal items, including clothing at a golf course, shopping at Target and Walmart; and delinquent dental bills.

Hunter, a founding member of the "Trump Caucus" in the House, denies he did anything wrong. At the very least, however, it is going to give Democrats one more headline with which to hammer the GOP, as the list of scandals continues to grow.

6. Trump says he hits back harder, so what will he do?

Trump has encouraged people to "hit back five times harder than they ever thought possible." First lady Melania Trump said during the campaign, "When you attack, he will punch back 10 times harder." And Trump himself took it up even higher than that before running for president.

When someone attacks me, I always attack back...except 100x more. This has nothing to do with a tirade but rather, a way of life!

Whatever the degree, Trump is a bare-knuckled fighter. And this week, he has taken some serious blows. So what is he going to do? How is he going to respond?

Russia Is The 'Dark Cloud' That Hangs Over Midterm Elections

The president has seemed to encourage Attorney General Jeff Sessions to end the Russia probe, tweeting that he should "stop this Rigged Witch Hunt right now"; he reportedly nearly had Mueller fired; he called Mueller's investigators "thugs" and likened the investigation to McCarthyism; and he stripped former CIA Director John Brennan of his security clearance.

So what's next? Pardon Manafort? More security clearances revoked? Nothing is clear.

As one Republican strategist noted, this election is all about "volatility." And nothing is more volatile right now than the man in the Oval Office.