Accessibility links
For 1st Time Since Vietnam, Airman Receives Miltary's Highest Honor Tech. Sgt. John Chapman was killed in Afghanistan in March 2002 during an operation to rescue a wounded Navy SEAL. President Trump presented the Medal of Honor to his widow. 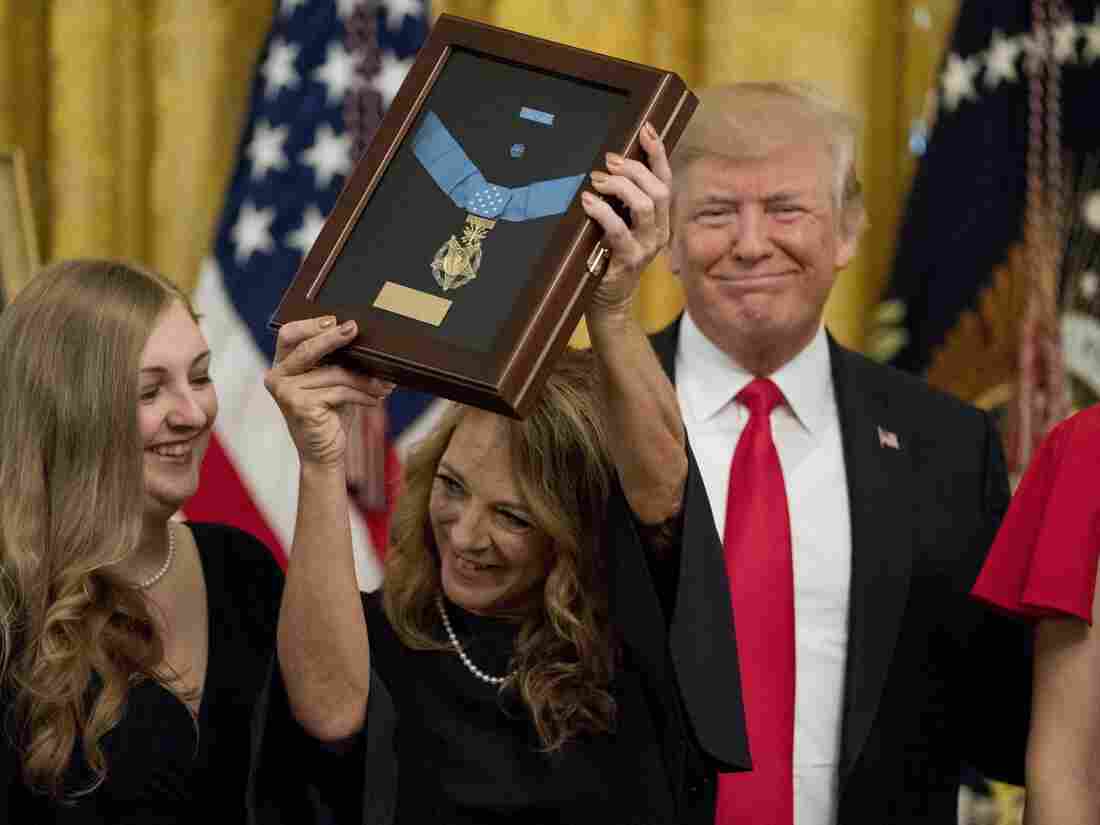 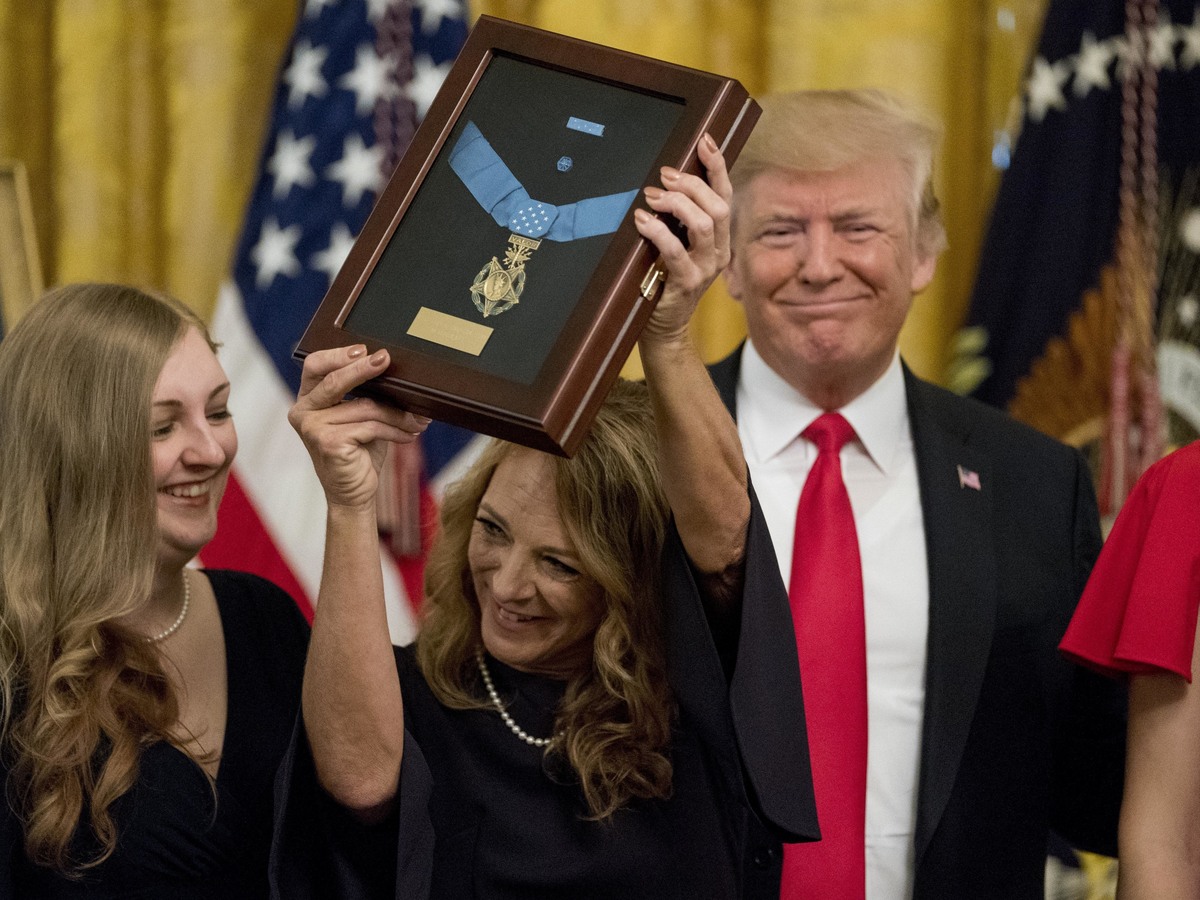 The distress call came in the dead of a March night in 2002. A U.S. commando unit — Mako Three Zero — was in trouble. Al-Qaida fighters had ambushed it on a snowy peak called Takur Ghar in eastern Afghanistan. 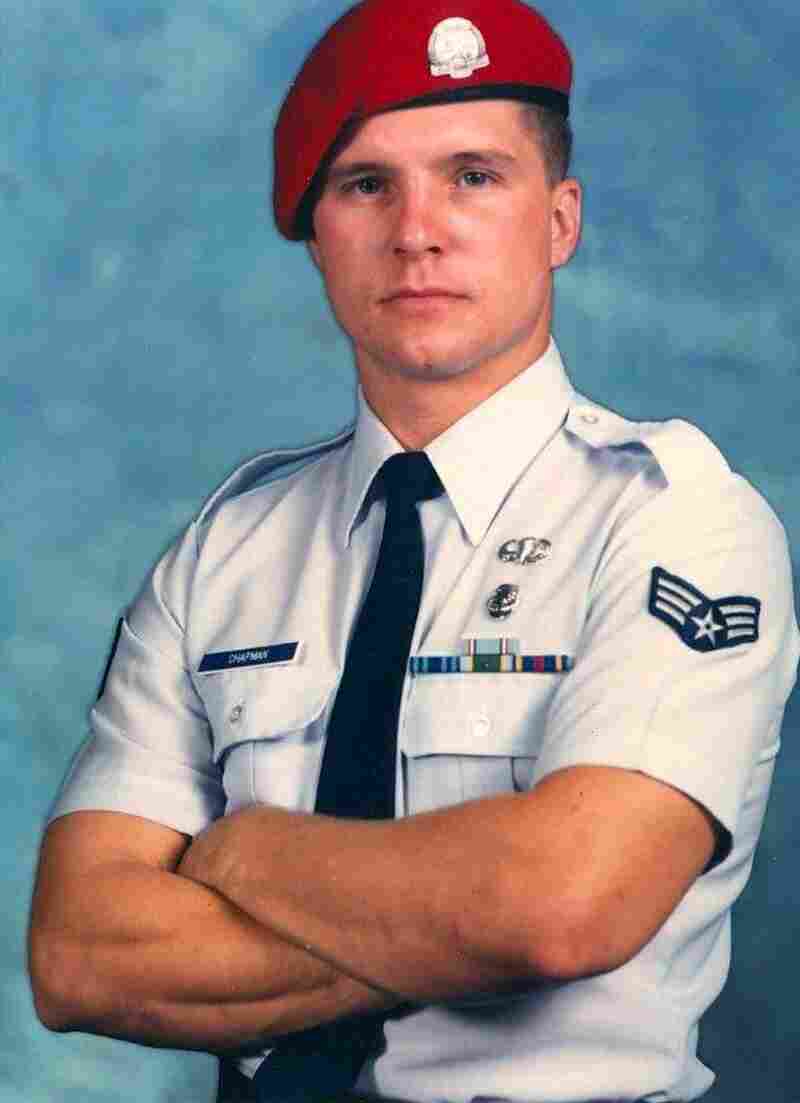 Chapman, shown at the rank of senior airman, died in Afghanistan in 2002 during an operation to rescue a wounded Navy SEAL. Secretary of the Air Force Public Affairs hide caption 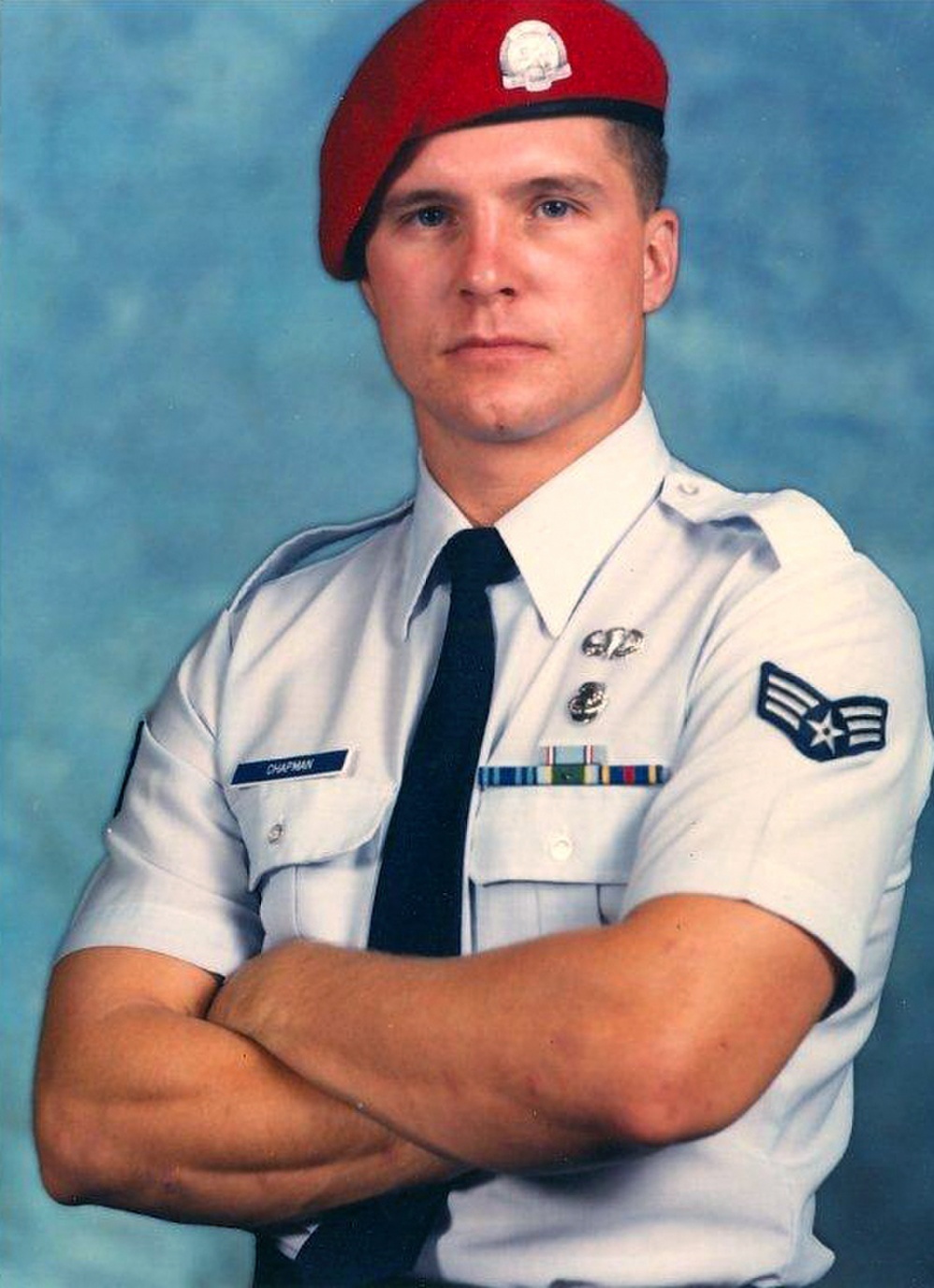 Chapman, shown at the rank of senior airman, died in Afghanistan in 2002 during an operation to rescue a wounded Navy SEAL.

Grim. Nail. Those were the call signs of the AC-130 gunships, fearsome aircraft with cameras, sensors and big guns.

"We flew as fast as we could to their location," he said.

When they arrived some 15 minutes later, they saw a downed helicopter miles from the mountaintop where commandos were trying to set up a reconnaissance post.

And they learned the worst.

One of the commandos, Petty Officer 1st Class Neil Roberts, had fallen off the ramp of the helicopter after it was riddled with fire. He was on top of Takur Ghar.

The AC-130 was able to see Roberts leaning against a large rock. His blinking transponder strobe was visible on their infrared cameras. And the crew could see he was being surrounded by al-Qaida fighters. Soon his strobe flicked off.

And they couldn't help. Al-Qaida was right next to him. The military calls it "danger close."

"If you fire at that point," says Harrison, "you risk losing a friendly."

The commando unit quickly reassembled, hopped into another helicopter, then flew back to get Roberts.

Harrison could see them spill out of the helicopter and head toward the al-Qaida bunkers. They looked like ghostly figures against the cold snow. Out in front was Air Force Tech. Sgt. John Chapman.

"He takes point and he goes straight toward the bunker and eliminates bunker No. 1," says Harrison.

Killing two fighters, before turning to another bunker.

But there's a problem in the skies above them. The AC-130 can't communicate with the commando team.

And since the gunship can't communicate with the ground unit, it can't fire. For the time being, the commando unit Mako Three Zero is on its own.

Chapman — whose specialty was calling in airstrikes — moves away from the cover of a large rock and a tree and into the open. He takes out the machine gunner in that second bunker, but is wounded and falls into the snow.

Harrison remembers seeing bullets and explosions from rocket-propelled grenades flash on his computer screen. It was close-quarters combat. One officer described it as a "firefight in a phone booth."

"The team has taken multiple casualties," Harrison says. "The decision is made to break contact."

The head of the commando unit, Master Chief Petty Officer Brit Slabinski, slides over toward the wounded Chapman in the snow. Slablinski talked about that moment last spring during an interview with Fox News, when he himself was awarded a Medal of Honor for his actions that day.

"I crawled over to John. Crawled over on top of John looking for some sign of life from him and I didn't get any," remembered Slabinksi, "no movement, no sigh or anything."

So, convinced Chapman was dead, Slabinski knew his team had to move away from enemy fire to survive. There were multiple casualties. The commandos popped smoke grenades to conceal their movements. Slabinski led them, slipping and sliding, down the mountain.

But Chapman wasn't dead. He was unconscious. He woke up and started firing again, trying to prevent the al-Qaida fighters from destroying a rescue helicopter. His body was recovered later that day outside the bunker.

Finally, Mako Three Zero made contact with the gunship.

The surviving commandos asked for the gunship to fire at the al-Qaida fighters, to cover their rescue. Then something strange happened, remembered Harrison.

"We saw another strobe that came active on top of the hill," he said.

A U.S. military strobe. But the man they were trying to rescue — Roberts — his strobe had been disabled by al-Qaida. What was this one? The airship fired rounds of massive 105 mm shells but kept clear of the area near the strobe signal.

Harrison said the air crew was confused, and it was only later after an exhaustive investigation — with new technology and enhanced videos — completed by the Air Force in 2016 that the story was complete.

"We didn't have the technology to put all the different pieces together, so these were just theories. There were many who had this theory three months after the initial investigation," says Chief Master Sgt. Greg Smith, with the Air Force Special Operations Command.

Chapman was initially awarded the Air Force Cross, the second-highest award for valor. Now with this new information, the medal was upgraded to the Medal of Honor. He is the first airman to receive the medal since the Vietnam War.

Harrison often thinks of that mission and says he gets "goose bumps" when he considers the bravery of those commandos.

And he says Chapman's medal is especially important to the Air Force, whose commandos work on the ground with Navy SEALs and Green Berets, calling in airstrikes or setting up airfields. Others — known as Air Force pararescuemen, or PJs — risk their lives to rescue downed pilots.

"When the average audience member thinks of the Air Force, they don't think of a battlefield airman," he says. "But the type of valor that is demonstrated by Sgt. Chapman is just one of those things for the history books."