Accessibility links
Names Of Accused Bishops To Be Removed From Buildings At 2 Catholic Pa. Colleges University of Scranton assistant professor Adam Pratt says the actions in response to the report on clergy sex abuse is "part of a healing process ... that we need to do as a community." 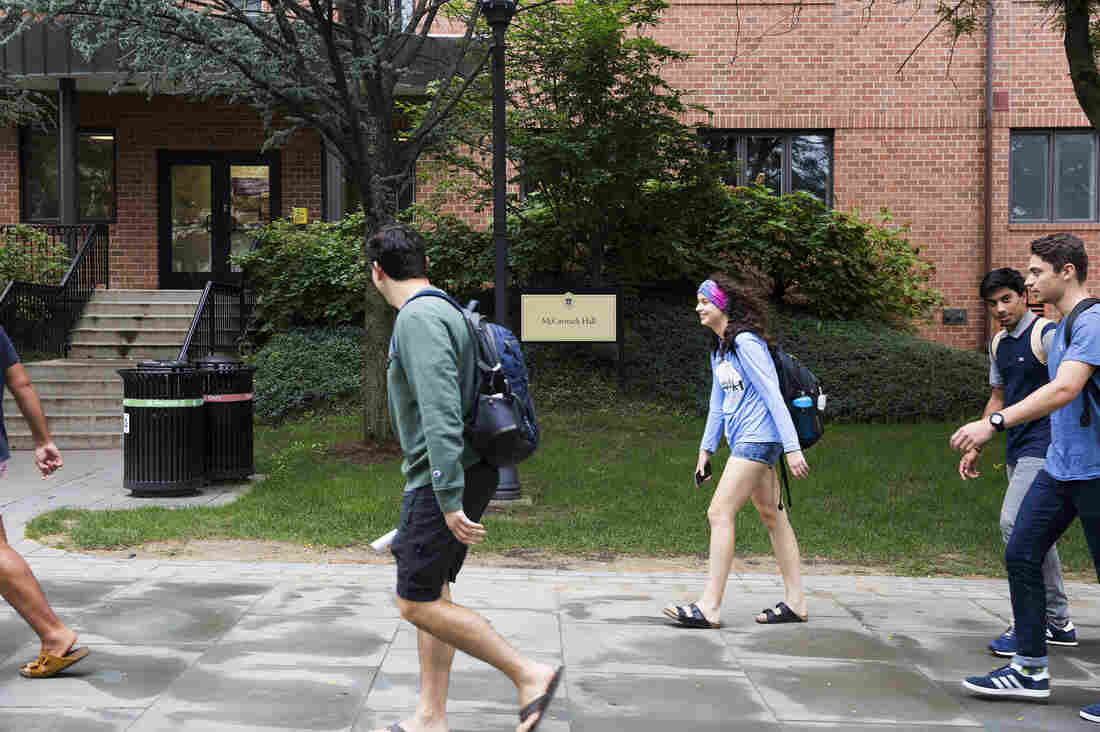 Incoming freshmen at the University of Scranton walk past McCormick Hall, one of three campus buildings that will soon be renamed in response to the recent report on Pennsylvania priest abuse. Rachel Wisniewski hide caption 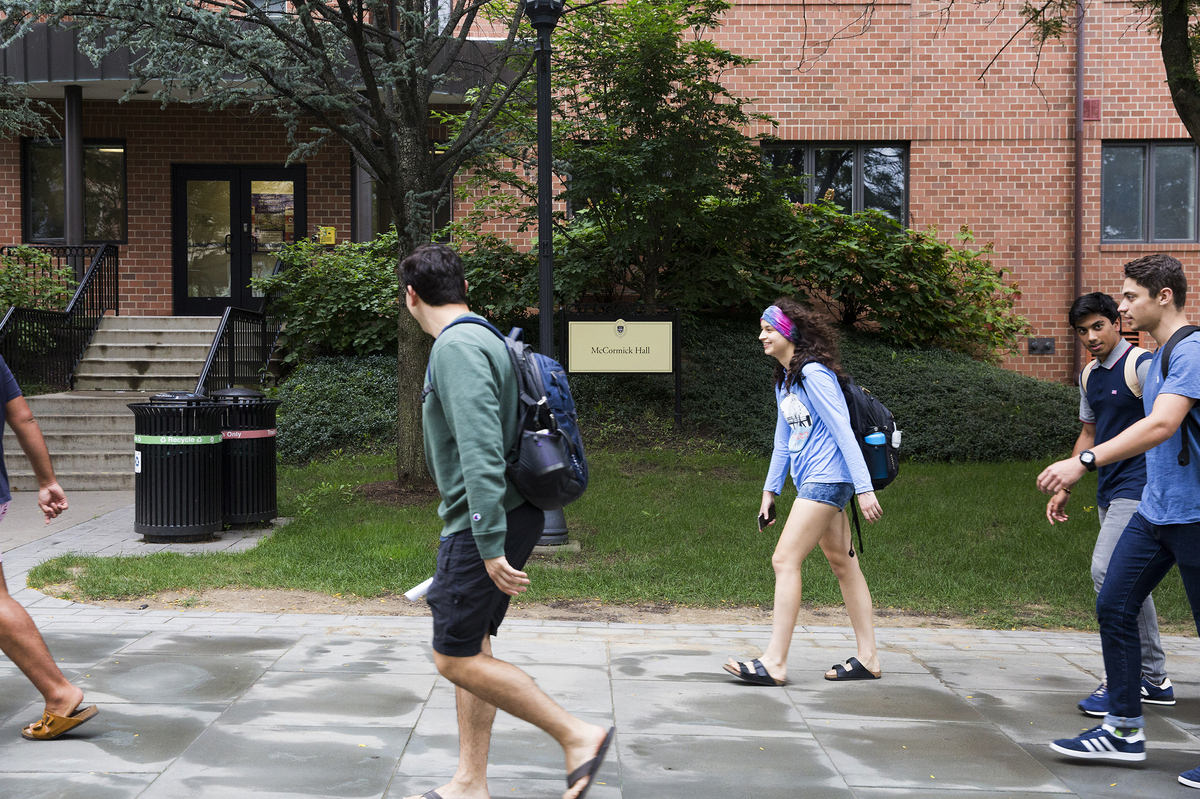 Incoming freshmen at the University of Scranton walk past McCormick Hall, one of three campus buildings that will soon be renamed in response to the recent report on Pennsylvania priest abuse.

Officials at the University of Scranton and King's College in Wilkes-Barre, Pa. have announced that buildings once honoring now-disgraced bishops will be renamed and that the bishops' honorary degrees will be revoked.

The move is part of the continuing fallout in the state and across the country from last week's massive report on clergy sex abuse. As the full effect of the sweeping grand jury report comes into view, many Catholic schools and universities feel as if they are in the eye of the storm and are taking steps to separate themselves from the havoc that the report has spread.

And high schools are beginning to re-examine once-hallowed Catholic Church figures, too. In the Pittsburgh area, a school bearing the name of Cardinal Donald Wuerl is being renamed after the report accused him of reassigning priests who allegedly abused children. It was a decision made at the request of Wuerl himself.

The University of Scranton was the first in Pennsylvania to react, deciding to remove the names of three bishops from buildings. University President Scott Pilarz wrote in a letter to faculty and students at the Jesuit school that the decision was made as a way of showing "sympathy for and solidarity with" victims of sexual abuse in the Diocese of Scranton.

That means new building signage. Plaques will be taken down. Maps will be reprinted. And honorary degrees will be revoked from the three Scranton bishops — Jerome Hannan, James Timlin and J. Carroll McCormick — who are accused of assisting in the cover-up. More than 1,000 minors were abused at the hands of some 300 priests across the state, according to the report. 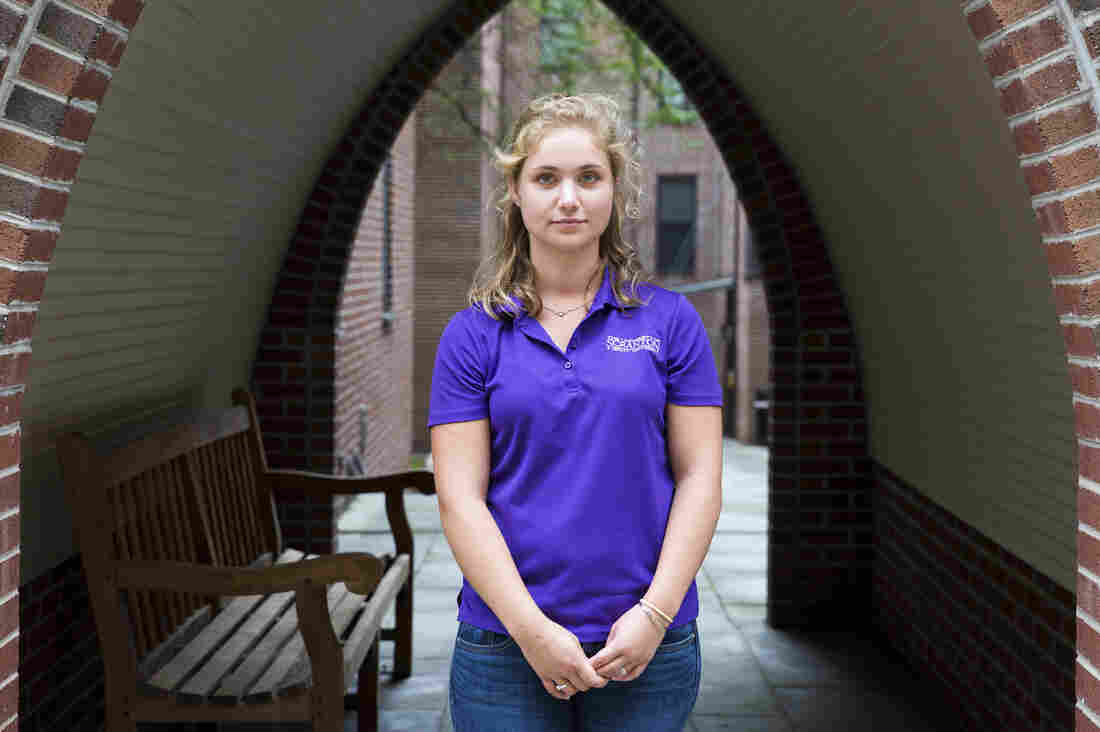 University of Scranton student Laura Freedman, standing in the archway of the soon-to-be-renamed Timlin House, is proud that the school is taking such swift action. Rachel Wisniewski hide caption 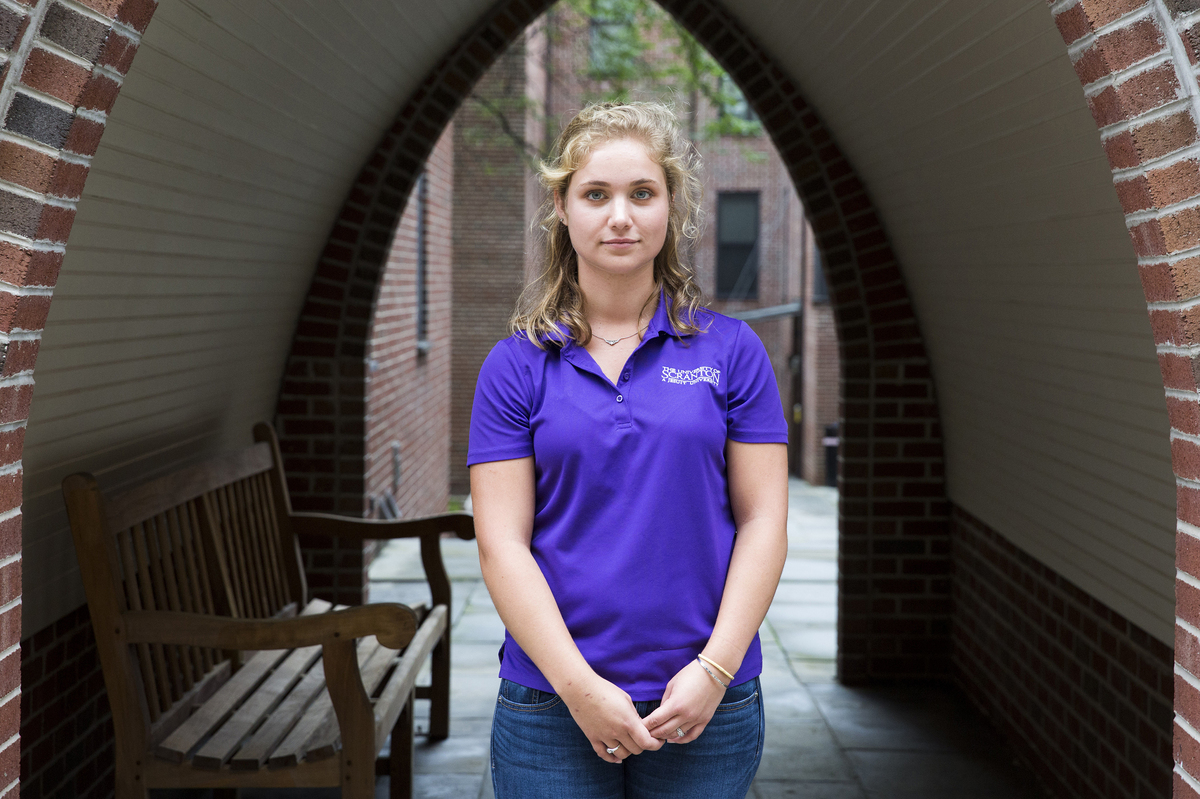 University of Scranton student Laura Freedman, standing in the archway of the soon-to-be-renamed Timlin House, is proud that the school is taking such swift action.

The students and faculty milling about the sleepy campus in the Pocono Mountains on a recent visit seemed to all share the same view: It was the right choice for the the school taking an early stance on the Pennsylvania report that has reverberated around the world.

Pratt said he's encouraged the university was the first to act on the Pennsylvania attorney general's grand jury report. Yet he hopes renaming the buildings is "part of a healing process and coming to a reckoning that I think is an important thing that we need to do as a community," he said.

Jeff Welsh, also a historian at the University of Scranton, added that removing the names will make space for the university to honor people who have contributed positively to the church.

"We're going to take away that recognition and recognize people instead who really have made a positive step forward for the Catholic Church. I think that's great," Welsh said. "I'm impressed the university took such a proactive stance."

Welsh took note of the fact that, according to the university, McCormick Hall will be renamed MacKillop Hall in honor of Saint Mary of the Cross MacKillop, an Australian nun who publicly uncovered the sexual abuse of children by a priest in the late 1800s.

Senior Jack Prendergast, who serves in student government at the University of Scranton, said the despite having walked past the three buildings countless times, he never stopped to question to whom the structures were devoted.

"I never put much thought into it. If someone were to ask me, I would've said, 'they're probably prestigious and well-upheld people to have their names put on a building,' " Prendergast said. "It's good that people have shed the light on this."

Laura Freedman, who will be a senior this year at the University of Scranton, said she was relieved to hear that the names of the accused bishops will be leaving campus.

"We're just happy that we're actually taking a stand on it and not just letting it slip under the rug kind of and trying to ignore it," said Freedman, who is Catholic, like the majority of students at this Jesuit school.

Ignoring the scandal is what professors here are strenuously trying to avoid, as faculty scrambles to assemble a response a week before fall semester begins.

Since the report was publicly released last week, professors have been racing to update the upcoming semester's coursework and arrange eleventh-hour meetings on how to teach the ugly findings of the nearly 900-page document that has battered the Catholic Church far beyond Pennsylvania.

"I'm rethinking how I'm going to start this semester just in light of what's happening in the past two weeks," Welsh said.

For the theology faculty, Chris Haw says that with three notable bishops being symbolically expelled from campus, the report has acquired new urgency for his students.

"Our department has already started exchanging some emails about what we are going to do to, perhaps on Day 1, name this elephant in the room," Haw said.

Haw hopes the school's self-reflection does not end with new building names. He said holding public forums could be productive for members of the campus community who feel unresolved about the decision.

"In cases like this, some people want to become very defensive and maybe sort of trenchantly defending the church, when so many other people are saying, this is not the time for you to be defensive," Haw said. "We need to be ventilating this big time right now."

A spokesman for the Diocese of Scranton released a statement that did not take a position on the renamed buildings directly. Instead, the diocese spokesman said the organization supports helping survivors of abuse and their families achieve healing.

The University of Scranton's administration would not agree to interviews. But in his letter to faculty and students, the school's president said he hopes the decision will start the "long but hopeful process to rebuild trust and find peace."