Accessibility links
Arizona Primary Preview: GOP Senate Candidates In Bitter Fight On Immigration GOP candidates are trying to prove they're with President Trump on immigration. But Arizona's late primary means little time to shift to the general election, when Democrats hope to flip the seat. 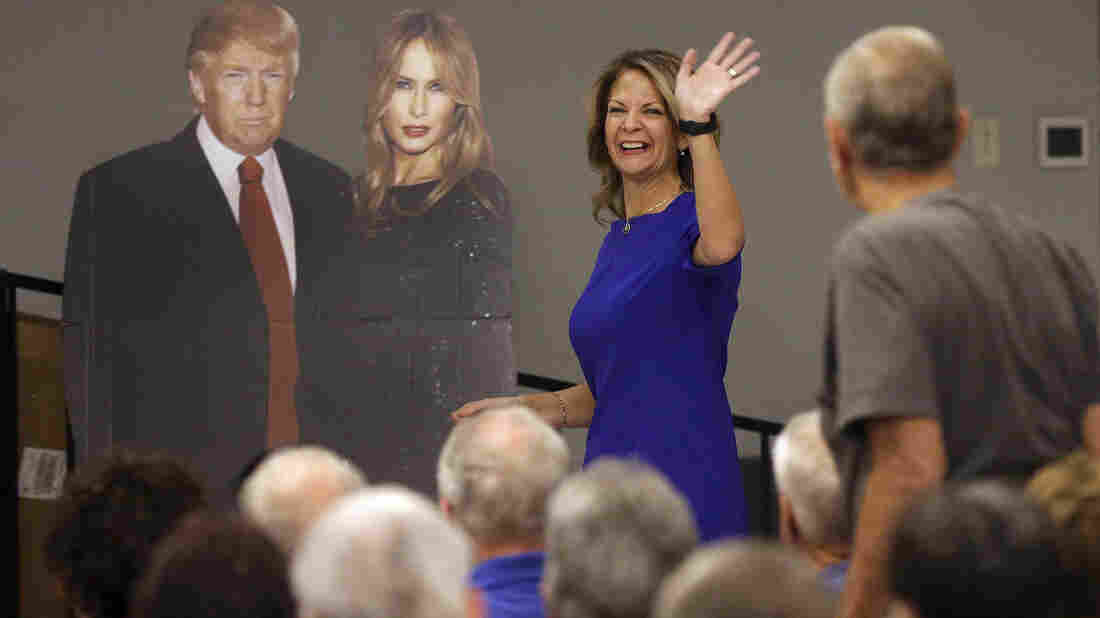 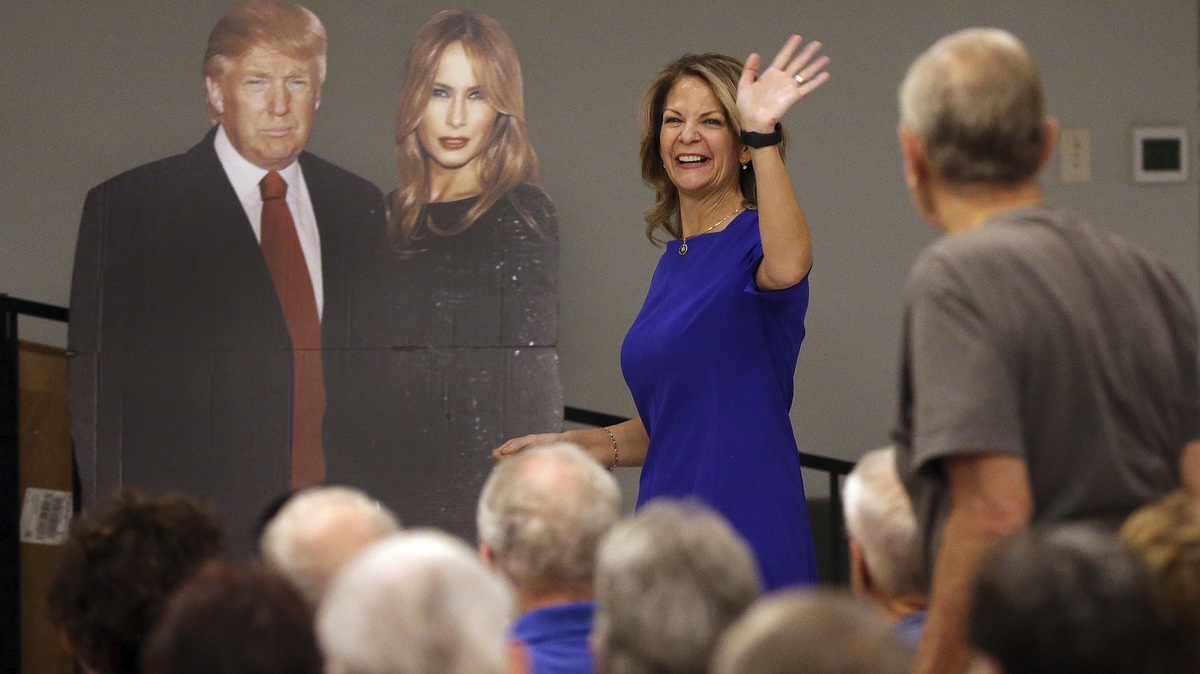 GOP Senate candidate Kelli Ward, waving at a Republican club meeting in Sun Lakes, Ariz., in May, has accused front-runner Rep. Martha McSally of supporting "amnesty" for some immigrants in the U.S. illegally.

At a campaign event in a restaurant northeast of Phoenix, Ariz., Republican Kelli Ward presented the crowd with a choice.

"Are we going to elect a senator that is cut from the same cloth as Jeff Flake and John McCain?" Ward asked.

The crowd of faithful supporters replied with a resounding "No."

Ward, a former Arizona state lawmaker, tried challenging GOP Sen. John McCain in a primary two years ago. She lost, but she never really stopped campaigning. Sen. Jeff Flake was already facing a challenge from Ward when he decided last year he couldn't win a Republican primary as a prominent critic of President Trump.

Flake is now retiring from the Senate, leaving an open seat that Democrats are eyeing as part of their very narrow path to take control of the Senate.

Republicans want to block them, and they can likely do that if they hold this seat in Arizona. But with less than three months before Election Day, the party first has to settle a bitter primary battle being fought largely over which candidate is Trump's best ally on immigration.

Ward promises to be his strongest supporter when it comes to that issue.

"Leadership in Washington will pass a budget without funding for the wall if we let them," she said. "And so, they have to know that there is a group of people, a powerful group of people who will not allow them to get away with it."

There's another far-right candidate in the race, Joe Arpaio, the former county sheriff convicted of criminal contempt and later pardoned by Trump. Many Ward supporters think Arpaio, 86, is too old. They also reject the front-runner in the race, Rep. Martha McSally, a former fighter pilot and a more moderate member of the House of Representatives. 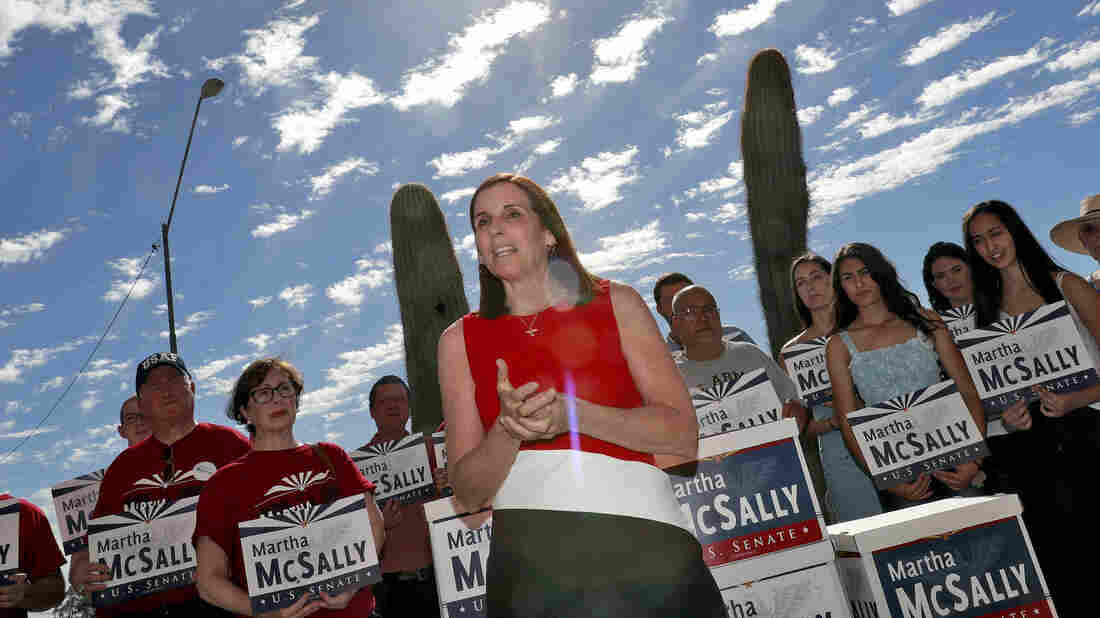 Front-runner Martha McSally has the endorsement of the border patrol union and is tacking right on immigration. Matt York/AP hide caption 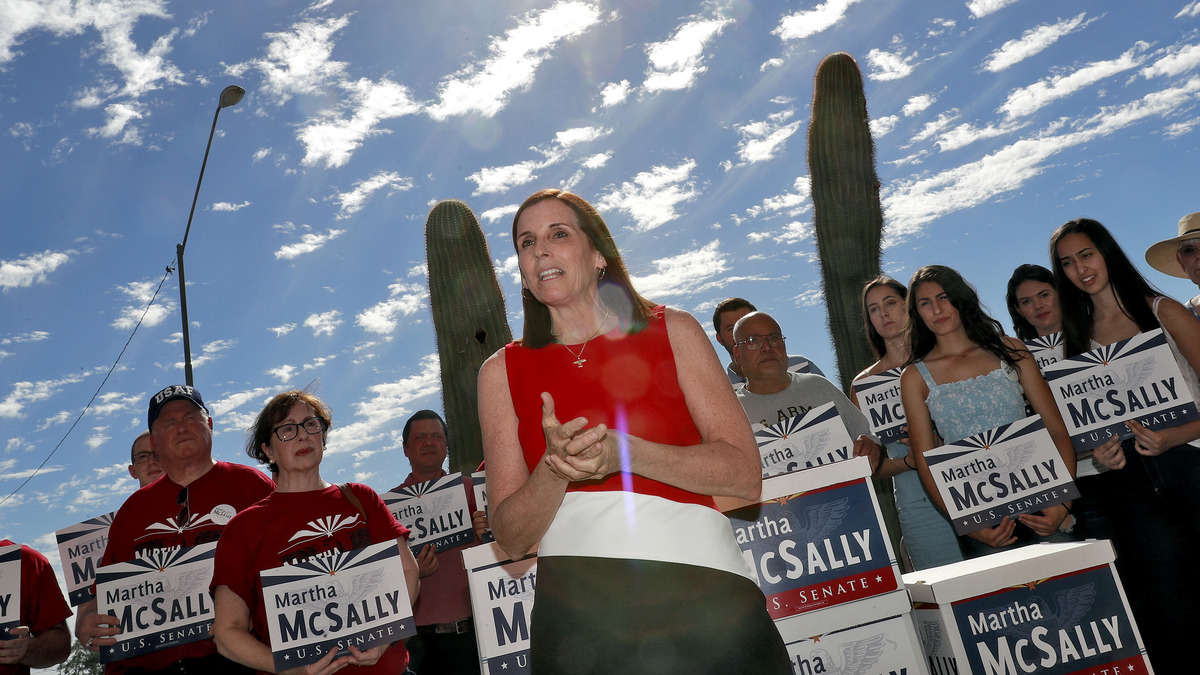 Front-runner Martha McSally has the endorsement of the border patrol union and is tacking right on immigration.

Republican voter Teresa Mendoza said McSally is not a reliable conservative: "Are we really going to elect another McCain in a dress? Oh, my God, just the thought!"

McSally criticized Trump in 2016, and although he hasn't endorsed her, he's talked about her in glowing terms a couple of times since taking office. McSally does have the endorsement of the border patrol union and is tacking right on immigration.

"Around Arizona, everywhere I go, whether people are registered as Democrats, independents or Republicans, they want our border secure," she said to reporters after the border patrol endorsement was announced. "They want to stop the cartels coming through our communities. They want to stop the opioids coming in and killing people. They want to stop the gang activity. This is a unifying issue, and I am proud to be working with our president in order to get the mission done."

McSally has, for better or worse, a congressional record to answer for that her primary opponents do not. She was an original co-sponsor of a conservative immigration bill in the House earlier this year. It would've provided limited legal status for some recipients of the Deferred Action for Childhood Arrivals program. It wasn't a path to citizenship, but Ward derides it as "amnesty."

McSally also stepped back from a DACA bill she had co-sponsored that would have provided a path to citizenship. She said that wasn't to pander to conservatives, but to discourage a forced vote on it.

"A bill by itself coming up like that is not the appropriate thing for us to be doing, and I just wanted to make that clear," she said in an interview.

But if McSally wins after taking a harder line in the primary, it's a tight pivot to the general election. Arizona's primary is next week, Aug. 28. Roughly six weeks later, mail-in ballots go out for November's election.

"Regardless of having to reframe her, maybe, in 30 days, I think they're willing to say, look, let's take that chance, but she's got to come out of the primary first and foremost," said Jaime Molera, a Republican political consultant in Phoenix. "And that's why you're seeing a massive amount of resources that I didn't think was needed, but I think they'd rather be safe than sorry."

The resources include over $3 million in Republican superPAC money. That's more than outside groups spent to boost McCain in his 2016 primary against Ward, who they fear is too extreme to win in November. Ward recently announced a bus tour, whose riders include a conspiracy theorist who promoted the false Pizzagate story.

"I guarantee you they're making sure that they have a lot of commercials ready to go the day after [the] primary that will be able to launch against whomever the Republican is," said Molera.