Accessibility links
FACT CHECK: Trump's Misguided Defense Of Cohen Payments When President Trump said the money didn't come from his campaign, he was making the wrong defense. The problem is that it didn't come from the campaign. 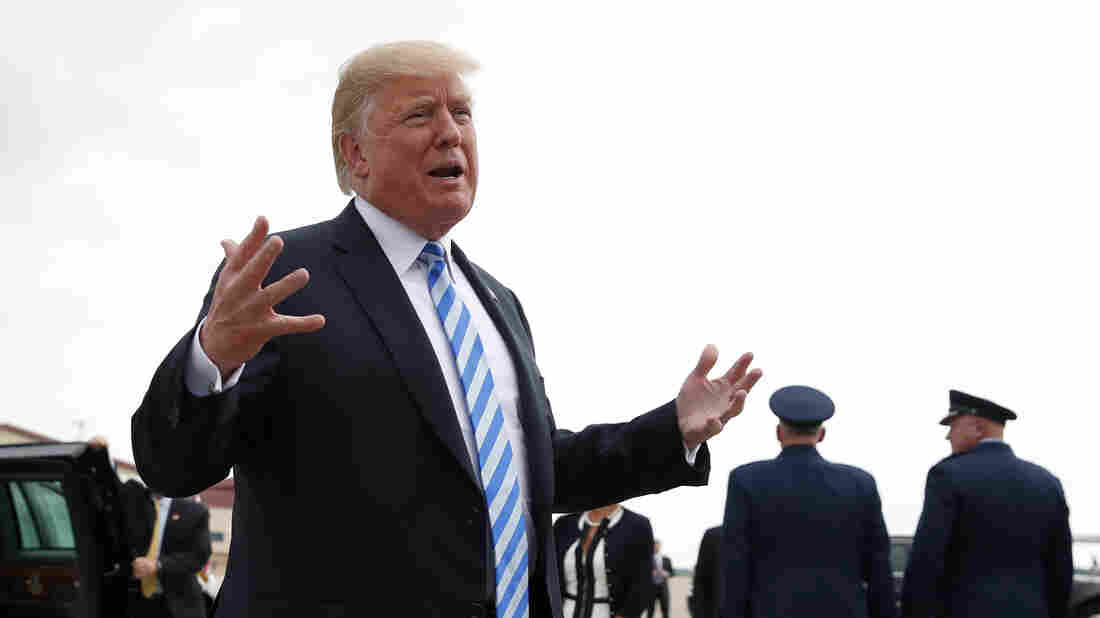 President Trump speaks to the media on Tuesday in Charleston, W.Va., shortly after the guilty plea of his former lawyer Michael Cohen on campaign finance violations, among other charges, and the guilty verdict against former campaign chairman Paul Manafort. Alex Brandon/AP hide caption 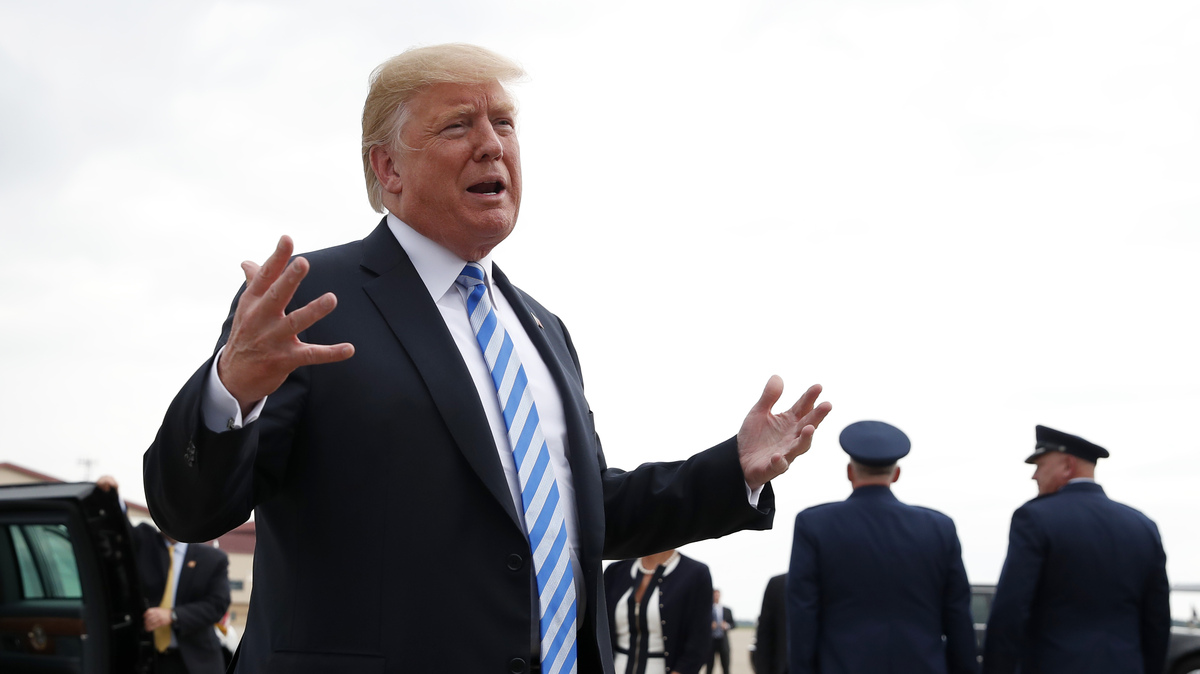 President Trump speaks to the media on Tuesday in Charleston, W.Va., shortly after the guilty plea of his former lawyer Michael Cohen on campaign finance violations, among other charges, and the guilty verdict against former campaign chairman Paul Manafort.

Fox & Friends was the natural venue for President Trump to strike back against Michael Cohen. The former self-described "fixer" for Trump had said under oath, before a federal judge, that he and Trump had violated the campaign finance law together.

On @foxandfriends, @POTUS said that "later on" he knew that former attorney Michael Cohen made hush-money payments to adult-film star Stormy Daniels and Playboy model Karen McDougal, and insisted the money did not come from campaign funds. pic.twitter.com/nChRG2VhVl

Trump was making the wrong argument. Like many of us, he seemed to misunderstand the relevant provision of campaign finance law. In fact, the president might be better off if his campaign had supplied the hush money.

Here are five questions (and answers) about President Trump and the legal problems with those hush payments.

1. What exactly did Cohen plead to?

He violated a law that basically says campaign expenses must be paid with regulated, disclosed contributions.

First, Cohen arranged for a friendly tabloid publisher to give McDougal a $150,000 contract for her story (not that it would publish it). Then, he set up a shell company to pay Daniels $130,000. The pressure was on. Daniels got her money less than two weeks before Election Day.

In court, Cohen said he did all of this at Trump's direction. He was later reimbursed and generously compensated by the Trump Organization.

2. What makes these payments illegal?

It's not complicated. The publisher's contract amounted to a corporate campaign contribution, but corporations cannot contribute to campaigns. Cohen's payment to Daniels amounts to a personal contribution from him to the campaign. But it was for $130,000; the legal limit is $2,700.

3. Does this argument hold up?

Prosecutors seem to have checked all the boxes. It's a reversal from 2012, when the Department of Justice deployed the statute in the high-profile trial of former Democratic presidential candidate John Edwards. Two of his campaign's wealthiest backers supplied money to support his mistress and their child. The DOJ alleged that the money helped support his presidential bid by keeping them out of the spotlight. Edwards argued he was trying to hide them from his wife, not the voters.

But in the Cohen case, the intent is clear.

"These payments were being made to stop Stormy Daniels and Karen McDougal from going public and hurting the campaign right before the election," said Larry Noble, a former general counsel to the Federal Election Commission. "That was the purpose. That's what makes the money spent a campaign contribution."

This is the clincher. Cohen said Trump told him to do it. There could have been an Edwards-style defense, that Trump needed to shield his wife, Melania Trump, and his children from embarrassment. But Cohen told the judge he arranged both contributions, at Trump's direction, "for the principal purpose of influencing the election."

Trump said on Wednesday that he found out about the payments "later on," but Cohen earlier produced a recording where he's apparently discussing the payment to McDougal ahead of time.

Law professor Rick Hasen, who specializes in campaign finance law, said the Justice Department may have wanted to make the case public now "so people could evaluate it, for whatever it's worth, in deciding how to vote in the next election."

5. Could Team Trump have handled this legally?

Campaign finance reports are rife with vague disclosures of expenditures. The campaign probably could have tucked the hush money into a disbursement marked "legal fees," and no one would have noticed.

Or Trump could have just paid those bills himself. A candidate can spend without limit on their own campaign, although it still must be disclosed.

One other thing: Obama

Here's the story behind the tweet. In 2012, the Federal Election Commission audited President Barack Obama's 2008 campaign committee and issued fines totaling $375,000. That's a substantial fine for the FEC, but not record-setting. The violations included delays in refunding contributions that exceeded the legal limit, and incorrect date stamps on contributions transferred between committees.