Accessibility links
U.S. And China Impose Fresh Tariffs As Trade War Escalates The U.S. imposed 25 percent tariffs on $16 billion of Chinese goods overnight, and China matched them. The two have slapped tariffs on a total of $100 billion of each other's goods in two months. 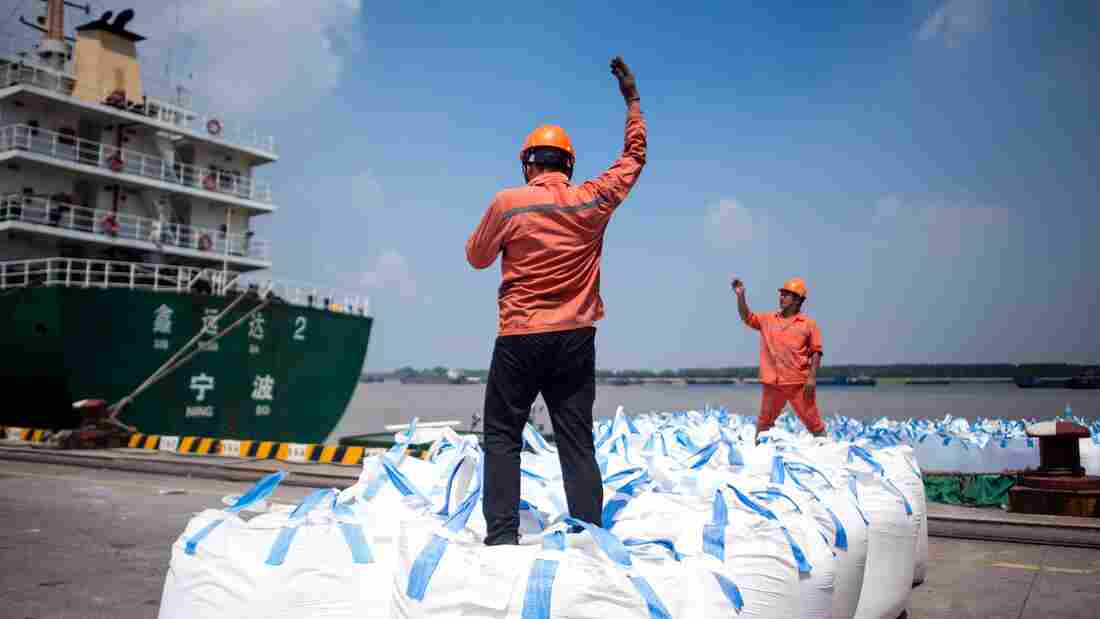 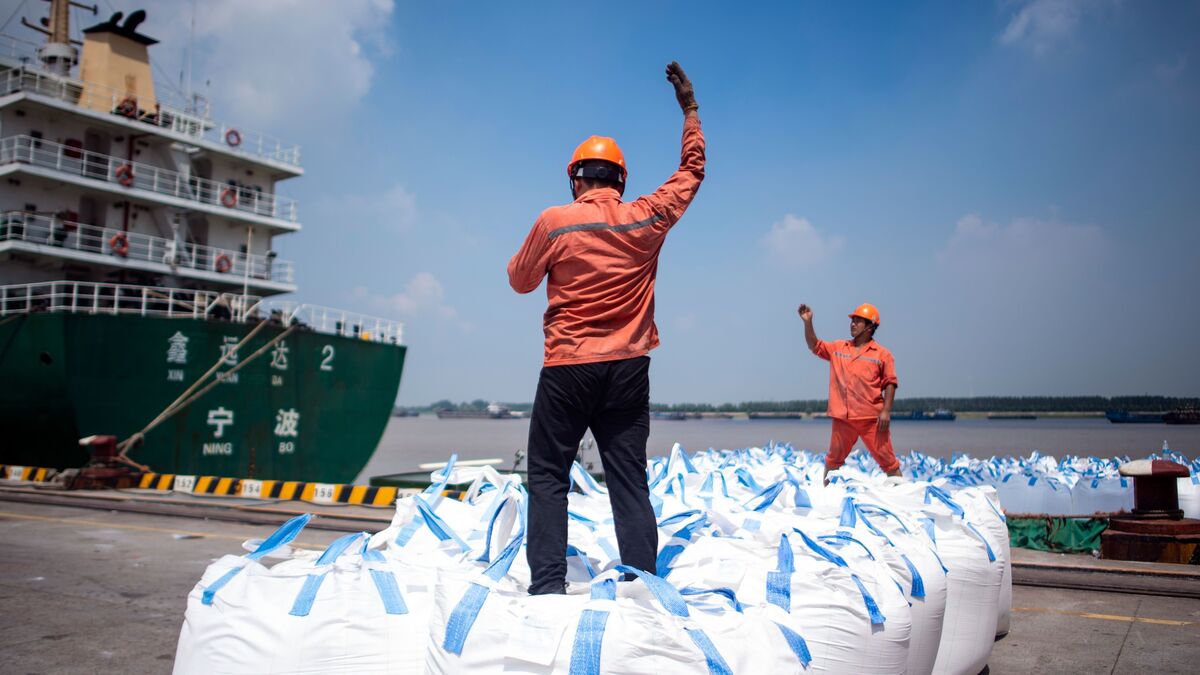 Dock workers unload bags of chemicals earlier this month at a port in Zhangjiagang, north of Shanghai.

Last month, after the U.S. leveled tariffs on $34 billion of Chinese imports and after China retaliated in kind, Beijing described the escalating trans-Pacific antagonism as "the largest trade war in economic history."

Now, both nations have upped the ante once again.

In the early morning hours Thursday, the U.S. slapped long-promised tariffs of 25 percent on an additional 279 Chinese products, amounting to $16 billion. The levies were imposed over what the Office of the U.S. Trade Representative calls "China's unfair trade practices related to the forced transfer of American technology and intellectual property."

Beijing wasted no time responding — literally. At precisely 12:01 a.m. ET, the Chinese Ministry of Commerce released a statement vowing to "make the necessary counterattacks." And then it matched the Trump administration's move with tariffs on $16 billion worth of U.S. imports, ranging from diesel fuel and coal to medical instruments and cars.

The Ministry of Commerce also declared that it plans to file a complaint with the World Trade Organization "in order to defend free trade and the multilateral system, and defend its legitimate rights and interests."

Combined with the round of tariffs that took effect in early July, the two countries have imposed tariffs on a total of $100 billion of their traded goods.

And the tit for tat is unlikely to stop there.

Earlier this month, both sides mused publicly that they were considering measures beyond those implemented Thursday, which had been expected for weeks. Shortly after the White House said it was considering raising tariffs on $200 billion of Chinese goods, to 25 percent from 10 percent — tariffs that have not yet gone into effect — China answered that it would retaliate with four kinds of tariffs on $60 billion of U.S. goods.

Late last month, President Trump said he's "ready to go to 500" — threatening to impose tariffs on imports of all Chinese goods. The U.S. imported $505 billion worth of Chinese goods last year, according to Census Bureau data.

The U.S. has used tariffs as a stick with a number of nations in recent months, slapping levies on products from Canada and Mexico to Turkey and the European Union — and has in turn been hit with retaliatory tariffs.

Some U.S. manufacturers have said their businesses have already been affected by tariffs on products such as steel and aluminum, and consumers may soon start to feel more of a pinch if companies pass along those costs.

David Wessel of the Brookings Institution explained on NPR's Morning Edition that some exported U.S. goods, such as almonds, have seen their prices drop domestically because Chinese tariffs have driven down demand abroad. But he adds that many other products, such as washing machines, have risen dramatically in price recently.

How Are Tariffs Affecting You?

"Different businesses will make different decisions. Some will absorb the cost of the tariffs in their profits and not raise prices so much. Others will raise prices," Wessel said. "A lot have been trying to do it for the last couple of years and have been unable to do so. If you raise prices, you're never going to say it's because, well, 'I want to make more money' — you're going to blame it on the tariffs."

Even as China and the U.S. trade tariffs, a Chinese delegation meeting with their American counterparts for trade talks this week in Washington, D.C. And a Chinese foreign ministry spokesperson expressed guarded optimism about how they're going.

"We certainly hope the talks could lead to good outcomes," Lu Kang told reporters Tuesday, "but one thing you should know is that we prefer no unnecessary prejudgments and predictions."

The day before, however, Trump told Reuters that there's "no time frame" for ending the trade dispute, and that he doesn't "anticipate much" from the trade negotiations in Washington.