Accessibility links
After 150 Years, 'Little Women' Still Resonates In Meg, Jo, Beth, Amy, Anne Boyd Rioux describes how the sisterly bond of the March girls that Louisa May Alcott created many years ago remains a paragon of female friendship and inspiration. 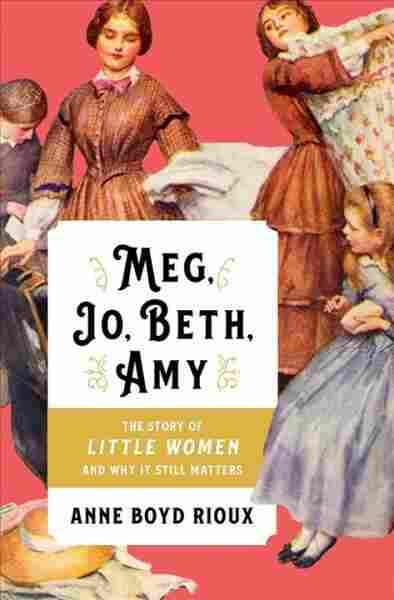 The Story of Little Women and Why It Still Matters

About once a year I turn to one particularly tattered book, its red cover worn, its two halves taped together after falling apart from frequent use years ago.

Like so many others through generations, I return to this book again and again, called to it by some inexplicable yearning for a life I never had, a nostalgia for a time I didn't experience, and a desire to learn and mature with the characters. Though I have never been able to choose a "favorite book," I have always known that if I had to be stuck on a desert island — with only one book to bring with me — it would be this one: Little Women, by Louisa May Alcott. Each time I read it, I discover something new and wonderful while simultaneously communing with the familiar and beloved.

Anne Boyd Rioux, a professor at the University of New Orleans and a scholar of 19th century literature written by women, understands the love so many of us have for Alcott's classic. On the 150th anniversary of the novel's publication, Rioux looks at its history and importance in her new book, Meg, Jo, Beth, Amy: The Story of Little Women and Why it Still Matters. Because, despite the fact that schools barely teach Alcott's work, it really does still matter. Rioux writes:

"Little Women has been called 'the mother of all girls' books.' It is also, arguably, the most beloved book of American women writers (and near the top for women writers around the globe) and has exerted more influence on women writers as a group than any other single book."

Rioux's claim here is substantiated. She has found dozens of allusions by a variety of authors (and not only women, by the way) to the ways in which Jo, the headstrong and ambitious sister in Little Women, has influenced them and allowed them to express their own desire to write and be recognized. From sci-fi legend Ursula K. Le Guin to poet Gail Mazur to contemporary novelists Barbara Kingsolver and Bich Minh Nguyen and on, the book has clearly affected significant writers today.

But Rioux goes beyond the personal experience of the book, that holy space between reader and book that is ultimately so individual. She points out that Little Women is remarkable for its look at how gender is not inherent but rather learned and performed, a fact recognized in gender studies scholarship to an extent. Little Women, Rioux writes, "more than perhaps any other novel written before the second wave of feminism, is fundamentally about how girls learn to become women or perform gender as it was constructed in the second half of the nineteenth century." She adds, for good measure, that the novel "also shows how men are educated into their gender, as Laurie must give up his music and prepare to take over his grandfather's business."

Meg, Jo, Beth, Amy isn't a stuffy scholarly work — it's a love letter written not by a smitten youngster naïve to her beloved's drawbacks but by a mature adult who can recognize complexity and nuance. Rioux examines the life of Alcott's classic over time, recognizing how it has affected culture — think of the HBO shows Sex and the City and Girls, each portraying the lives of a group of four women whose distinctions are clear and lead them on different paths through not just womanhood but personhood. Meg, Jo, Beth, and Amy have served as archetypes for creators, their differences allowed to coexist. But unlike many more modern views on such characters, the sisterly bond of the March girls can still be held up today as a paragon of female friendship, so often belittled in popular culture by women being cruel to one another in order to fit into a male space — or pitted into competition to fight for a token role.

Little Women may seem wholesome and sentimental — and it has gotten a bad rap for these reasons by scholars and readers of all genders. But Rioux, both with the students she teaches and in this book, fights against such narrow-mindedness. The March sisters, she argues, "unearths tensions between family and self, sisterhood and separation, growing up and failing to find one's way."

In these ways, it is a book very much for our time and for all genders.