Accessibility links
'I Would Rather Die Than Go Back': Rohingya Refugees Settle Into Life In Bangladesh A year ago, Myanmar soldiers launched what the U.S. and the U.N. say was a campaign of ethnic cleansing against Rohingya Muslims. "I would rather drink poison than go back to Myanmar," says a refugee.

Editor's note: This report includes some graphic descriptions of injuries and violence. 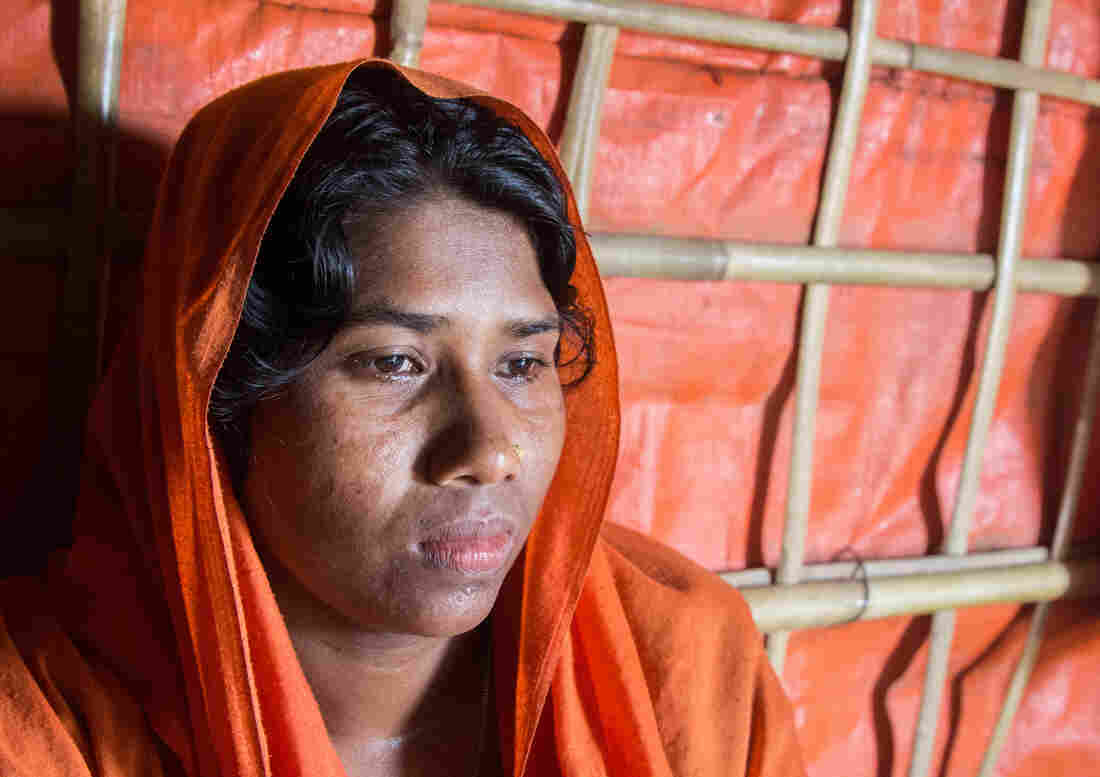 Dildar Begum, 30, in her shelter in the Hakimpara Rohingya refugee camp in Bangladesh. She says 29 members of her extended family were killed a year ago in what the U.S. has said was a campaign of ethnic cleansing by the Myanmar military. Jason Beaubien/NPR hide caption 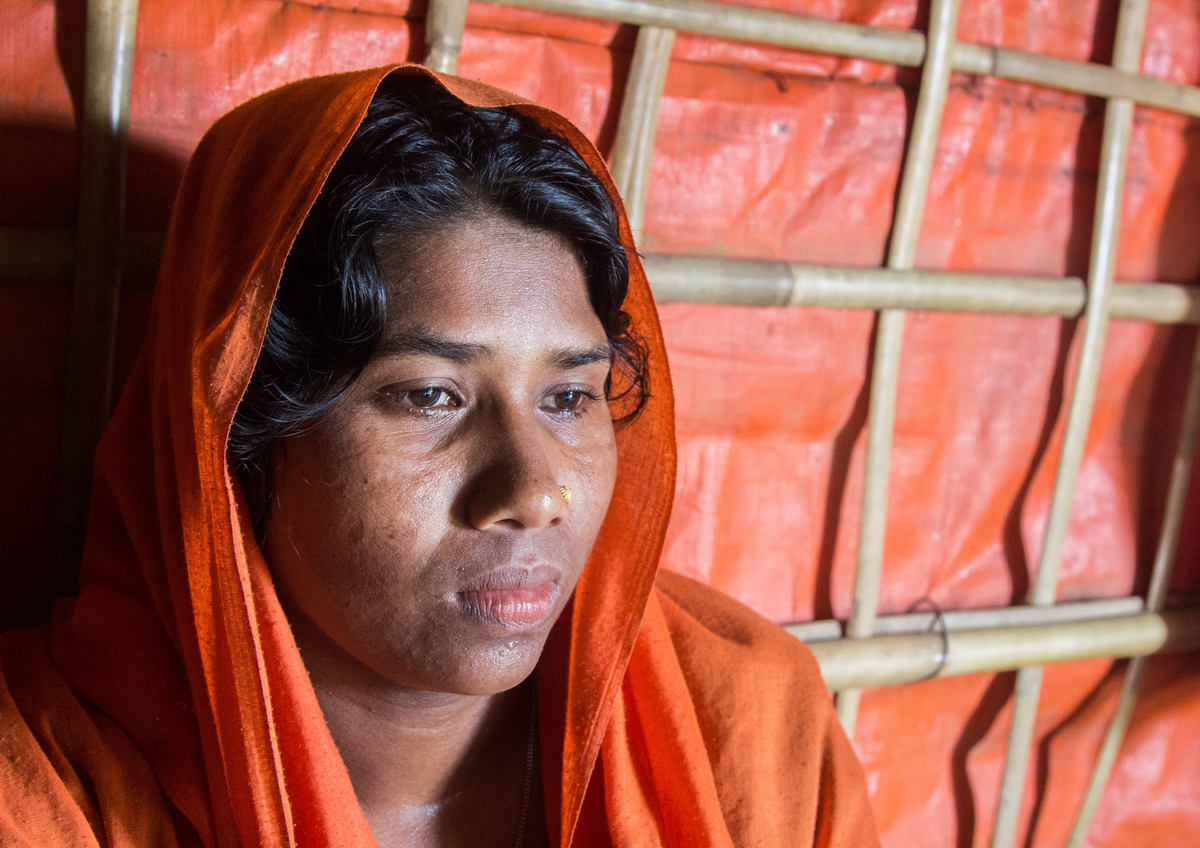 Dildar Begum, 30, in her shelter in the Hakimpara Rohingya refugee camp in Bangladesh. She says 29 members of her extended family were killed a year ago in what the U.S. has said was a campaign of ethnic cleansing by the Myanmar military.

The Myanmar soldiers arrived in the morning, Dildar Begum says. They surrounded her village. It was in the days before the Muslim holiday of Eid al-Adha and her family had been preparing for the upcoming feast — a feast that would never happen. In the ensuing attack, Begum says, government troops killed 29 members of her family.

"It's been 12 months that I'm living in Bangladesh, but there's not any days in which I don't remember my family," she says. "I miss them every day. I shed tears from my eyes for them every day."

In late August of last year, Begum was among hundreds of thousands of Rohingya Muslims who fled across a muddy brown river into neighboring Bangladesh, escaping what they now refer to as "the genocide." They arrived with horrific accounts of Myanmar soldiers and pro-government militias attacking their villages, killing their neighbors, raping their children and torching their houses.

It was the start of the fastest human displacement since the Rwandan genocide of 1994, resulting from violence the U.S. and U.N. have referred to as "ethnic cleansing."

When the attack began, Begum and hundreds of others fled to a riverbank along the edge of their village, called Tula Toli, where they were trapped by Myanmar troops. Soldiers ripped her baby boy from her arms, Begum says, and hacked him to death in front of her with a long knife. She watched them slit her husband's throat. Another soldier smashed her 5-year-old son's head with a rock. People were killed all around her.

Soldiers dragged Begum and her 10-year-old daughter to a house, where Begum says she was repeatedly raped.

"My daughter was screaming for help," she says. "The soldiers beat her. She got cuts on her head and her body. Eventually, we both pretended to be dead."

When the soldiers left, Begum and her daughter were able to escape. They hid in a forest for almost a week before starting the trek to the Naf River to cross the border in to Bangladesh.

While the exact details of Begum's account can't be confirmed by NPR, Human Rights Watch says hundreds of Rohingya villagers were killed at Tula Toli on Aug. 30, 2017. Begum estimates the death toll as in the thousands, and says all the Rohingya from her village were either killed or forced to flee.

After she and her daughter reached safety in Bangladesh, Begum was hospitalized for three months as she recovered from her wounds. She still has scars across her body. There are jagged lines on her scalp where her hair hasn't grown back. 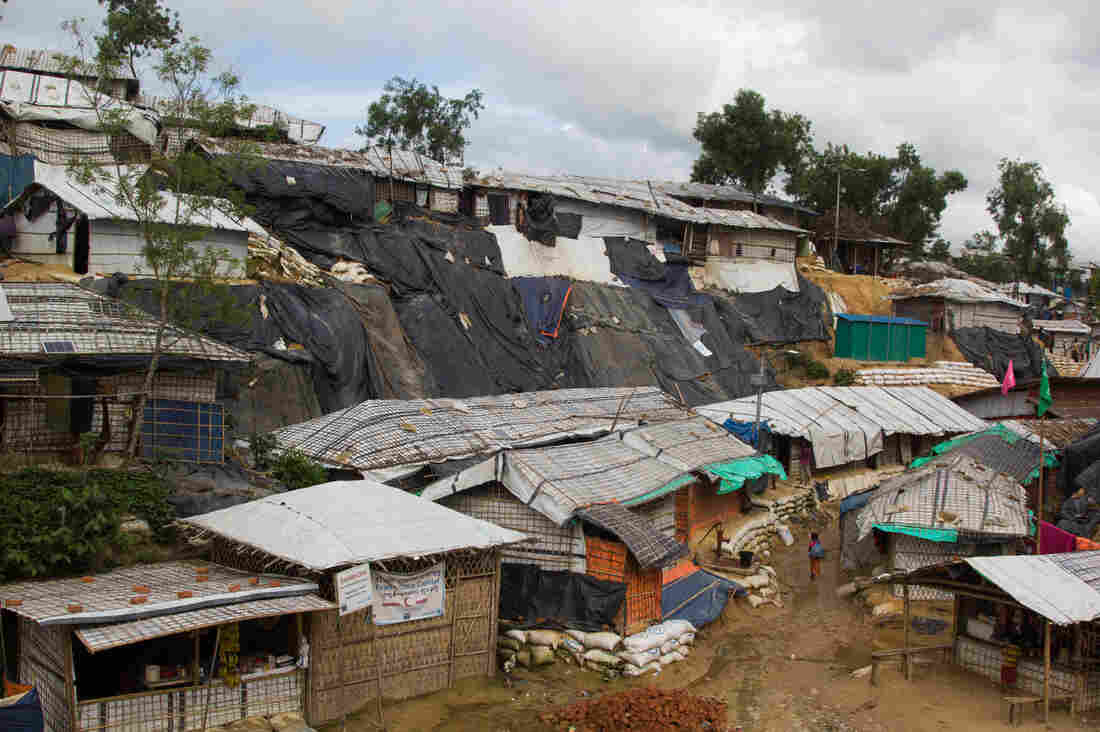 Tarps have been draped over steep sand cliffs in the Balukhali Rohingya refugee camp in Bangladesh to keep them from collapsing. Jason Beaubien/NPR hide caption 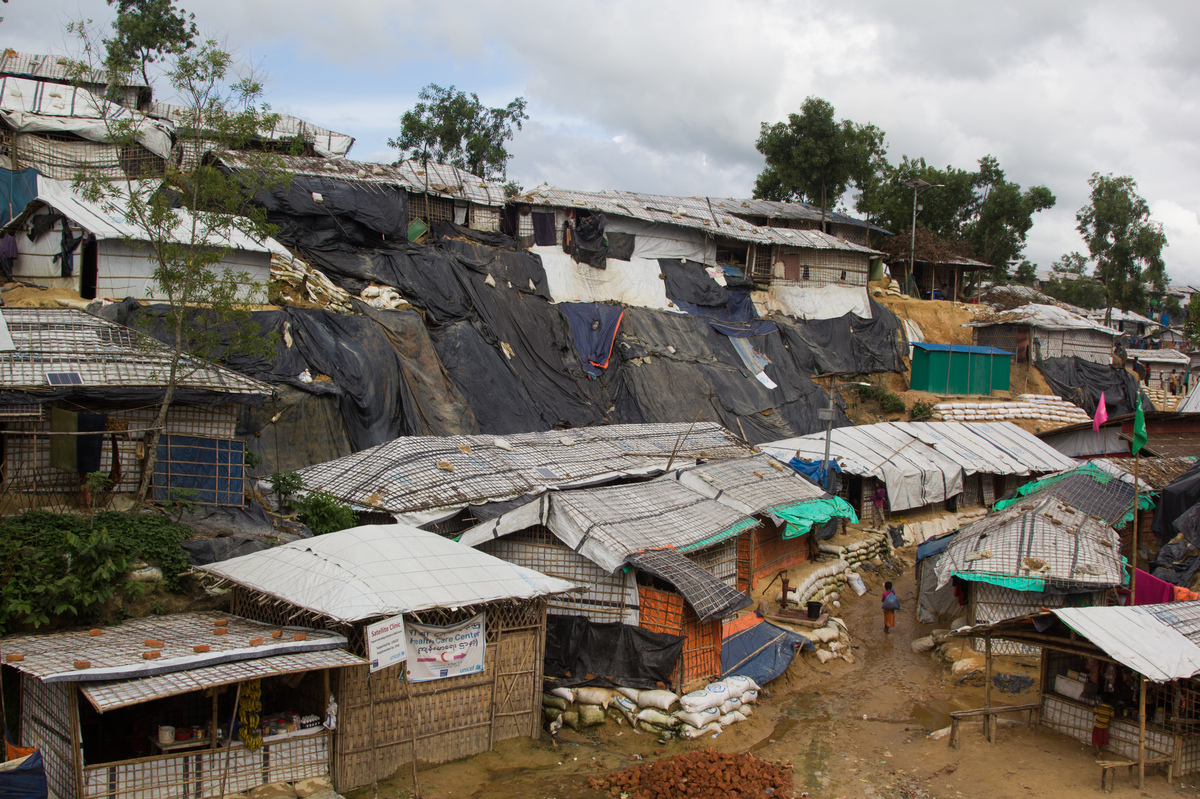 Tarps have been draped over steep sand cliffs in the Balukhali Rohingya refugee camp in Bangladesh to keep them from collapsing.

The 30-year-old widow says she'll never remarry — first, because she misses her late husband, and second, because no man would accept a woman covered in so many cuts.

The crowded mega-encampment just east of the Bangladeshi city of Cox's Bazar where Begum now lives is the largest refugee camp in the world. Bangladeshi officials have made it clear that eventually, they want the Rohingya to go back to Myanmar.

Begum says at least for her and her daughter, that's not going to happen. 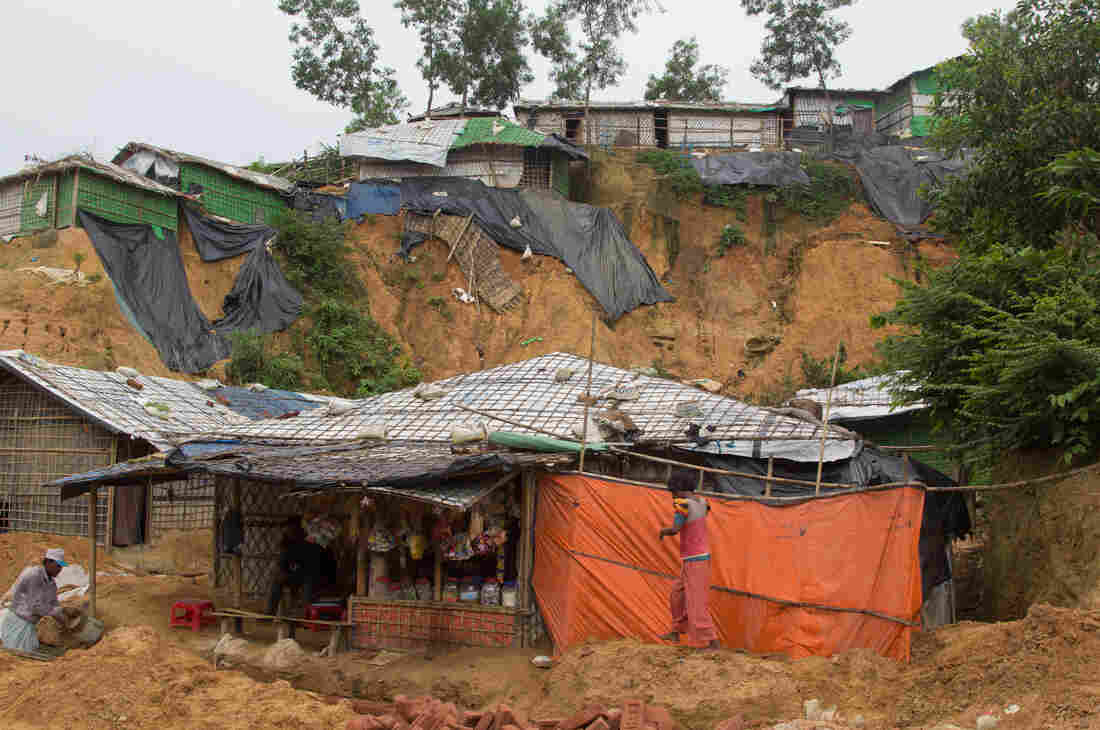 Shelters in the Balukhali refugee camp sit at the base of steep cliffs of sand. Jason Beaubien/NPR hide caption

Many other Rohingya refugees also tell NPR they're afraid to return home. There are now nearly 900,000 Rohingya living in camps in Bangladesh. The 700,000 who arrived last year joined another 200,000 who'd fled earlier bouts of violence. It's unclear exactly how many Rohingya remain in Myanmar, although prior to last year's attacks, about a million were living in western Myanmar's Rakhine state.

The Rohingya have suffered persecution in Myanmar, also known as Burma, for generations. They're a distinct ethnic group with their own language. Also they're Muslims living in a predominantly Buddhist country. Myanmar claims they're illegal immigrants from Bangladesh and stripped most of them of citizenship decades ago, but Bangladeshis consider them Burmese, leaving them essentially stateless. The refugee camps in Bangladesh are overcrowded and provide only minimal shelter.

"This is an extremely difficult situation," says Fiona MacGregor, the spokesperson for the International Organization for Migration's wide-ranging operation to assist refugees in Cox's Bazar. "It's almost a million people entirely relying on aid. It's the biggest refugee settlement in the world and it's in an area that suffers extremely difficult environmental conditions." 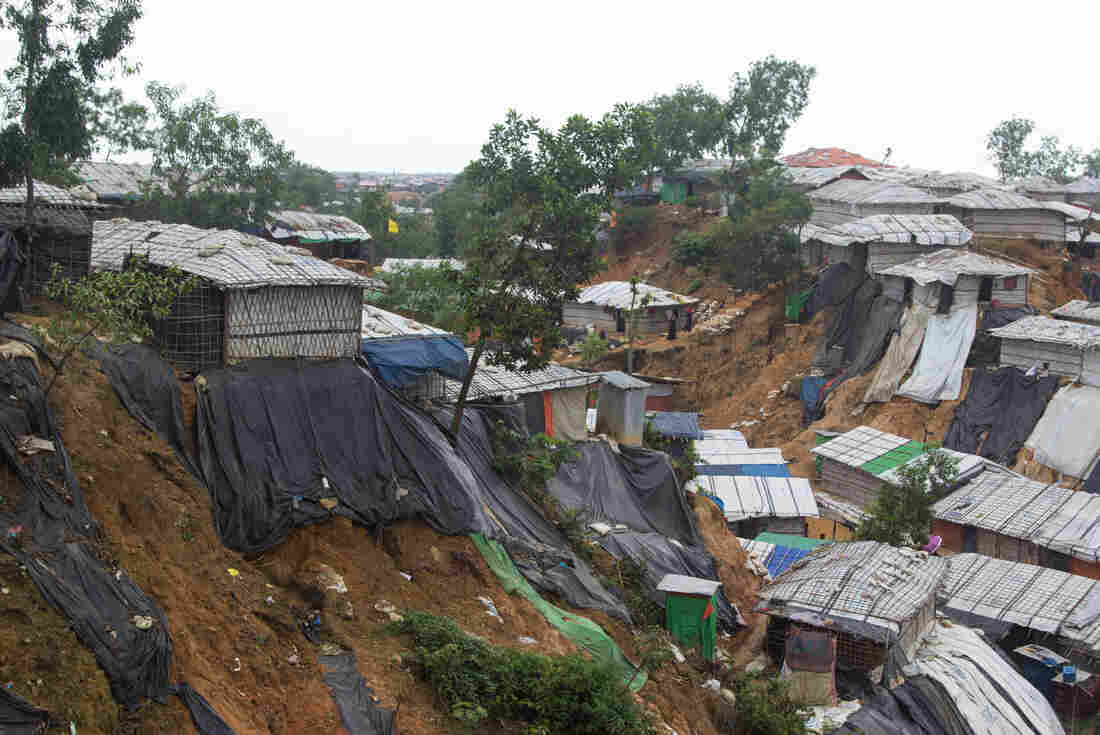 Makeshift shelters in the Balukhali Rohingya refugee camp in Bangladesh. During monsoon rains, thousands were moved to more secure shelters at the edge of the camp. Jason Beaubien/NPR hide caption

Shelters made out of tarpaulins and bamboo are jammed together on steep, sandy hillsides. Refugees have stripped almost all the vegetation in the area and used it for cooking fires.

In the ongoing monsoon rains, which began in June, some hills have collapsed. Heavy downpours turn the camps' dirt pathways into rivers of mud. Aid agencies have sandbagged cliffs, installed pit latrines and dug wells. But services remain minimal.

It's rare for kids to go to school for more than two hours a day, if at all. Officially, the Rohingya are not permitted to work in Bangladesh. So hundreds of thousands survive primarily off international food aid.

Each day in the Palang Khali camp, the Turkish government runs a huge soup kitchen that distributes hot meals to 20,000 people.

Nurulol Houqwe and his son are walking out of the distribution compound with what Houqwe says will be enough for lunch for his family of five. They've been given chicken curry and rice, scooped out of giant aluminum pots. 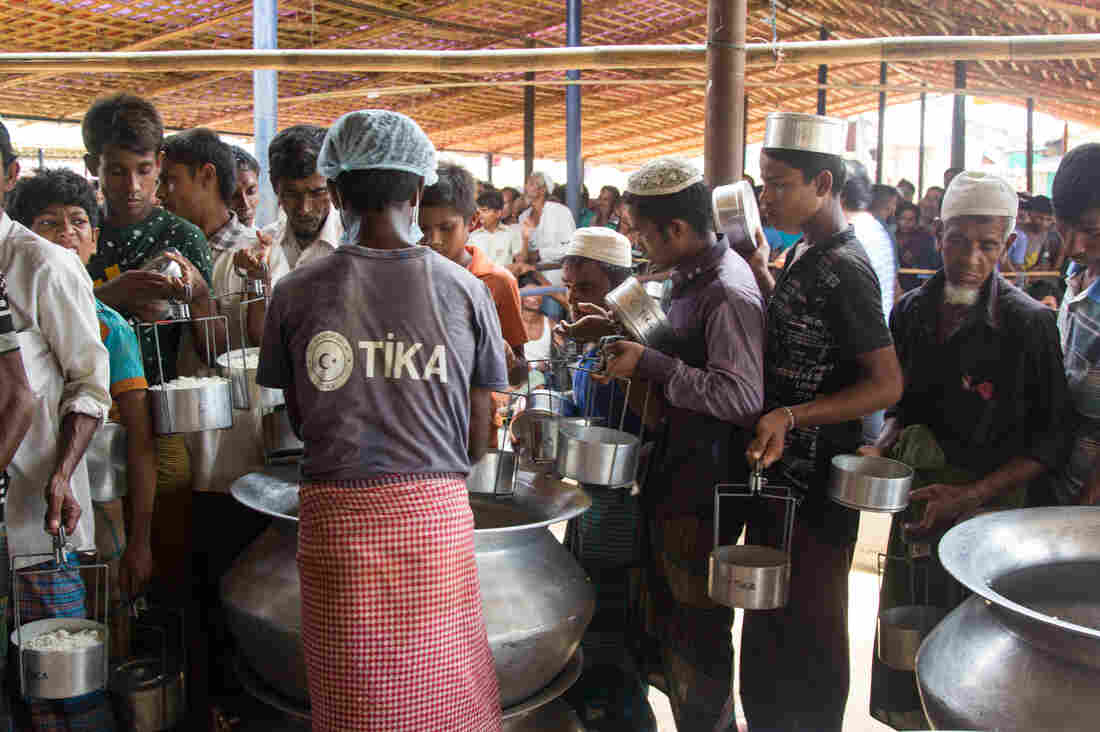 Men and boys line up for food distribution in the Palang Khali Rohingya refugee camp in Bangladesh. Women and girls wait for rations on the other side of the building. Jason Beaubien/NPR hide caption

"We always come here, every day," Houqwe says. "Every day."

People line up before sunrise to try to get the cooked food. When the volunteers have ladled out the last of the curry, there are still hundreds waiting in line, jammed chest to shoulder blade like a human accordion. But they leave with nothing. 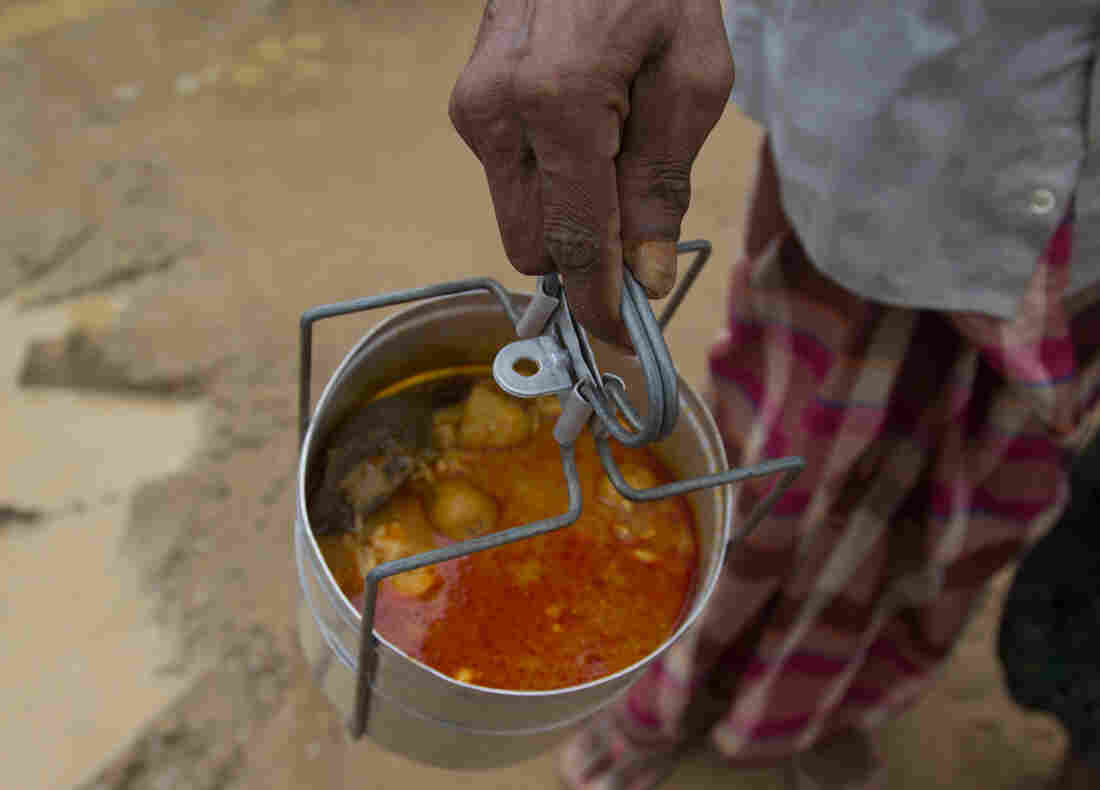 A Rohingya man carries a pot of chicken curry back to his shelter in the Palang Khali refugee camp in Bangladesh. He waited in line all morning to get the food from a soup kitchen run by the Turkish government. Jason Beaubien/NPR hide caption

The United Nations' World Food Program also distributes rations every two weeks — dried lentils, rice and vegetable oil. But cooking in the camps can be a challenge. Firewood collected from the edges of the camp has dwindled fast, and now the monsoon rains make getting dry firewood almost impossible. Houqwe says if he's able to get the curry from the Turkish-run kitchen, he knows that his family will at least have one solid meal for the day. 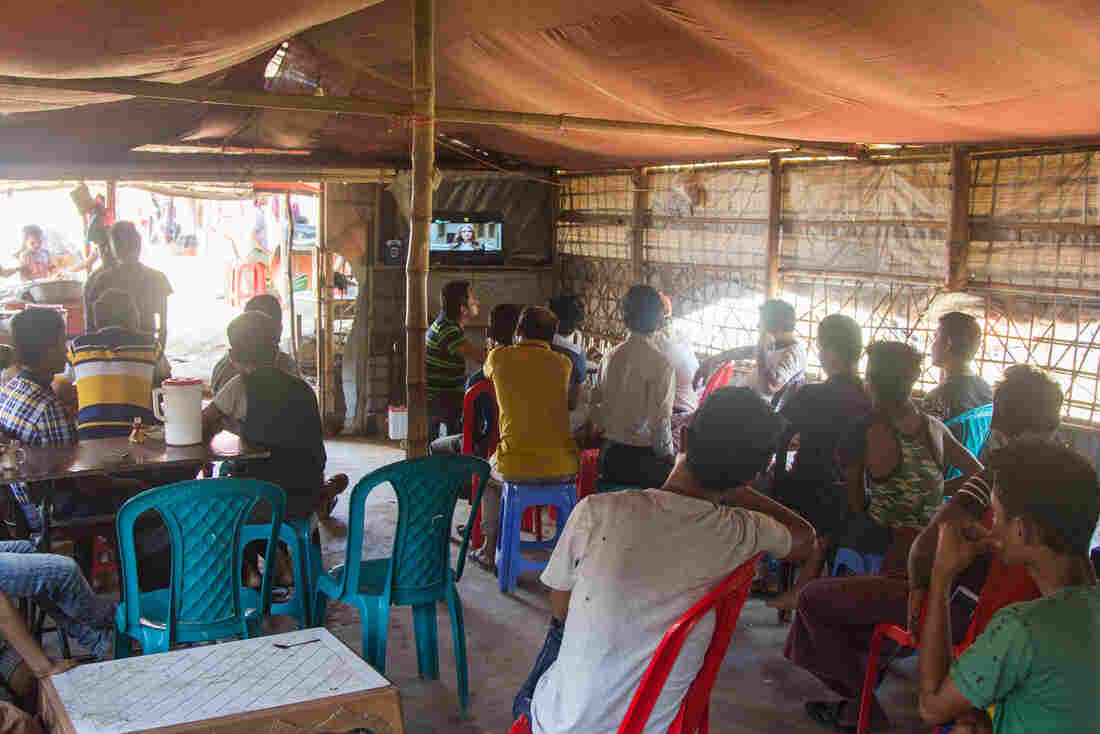 While many of the Rohingya continue to focus simply on surviving from day to day in the camps, others are setting up businesses. Bustling markets offering fish and vegetables have sprung up along many of the main roads in the camps. Refugees have started barbershops, small grocery stands and restaurants. Several use solar panels to offer phone charging services to residents. Children sit behind piles of fire-engine red chiles that they sell for pennies.

Abdu Rokim owns a small tea shop known as the Police Station Restaurant in the Balukhali 2 camp in Cox's Bazar. He serves tea and samosas and soft drinks. The shop got its name simply because it's next-door to a Bangladeshi police barracks. 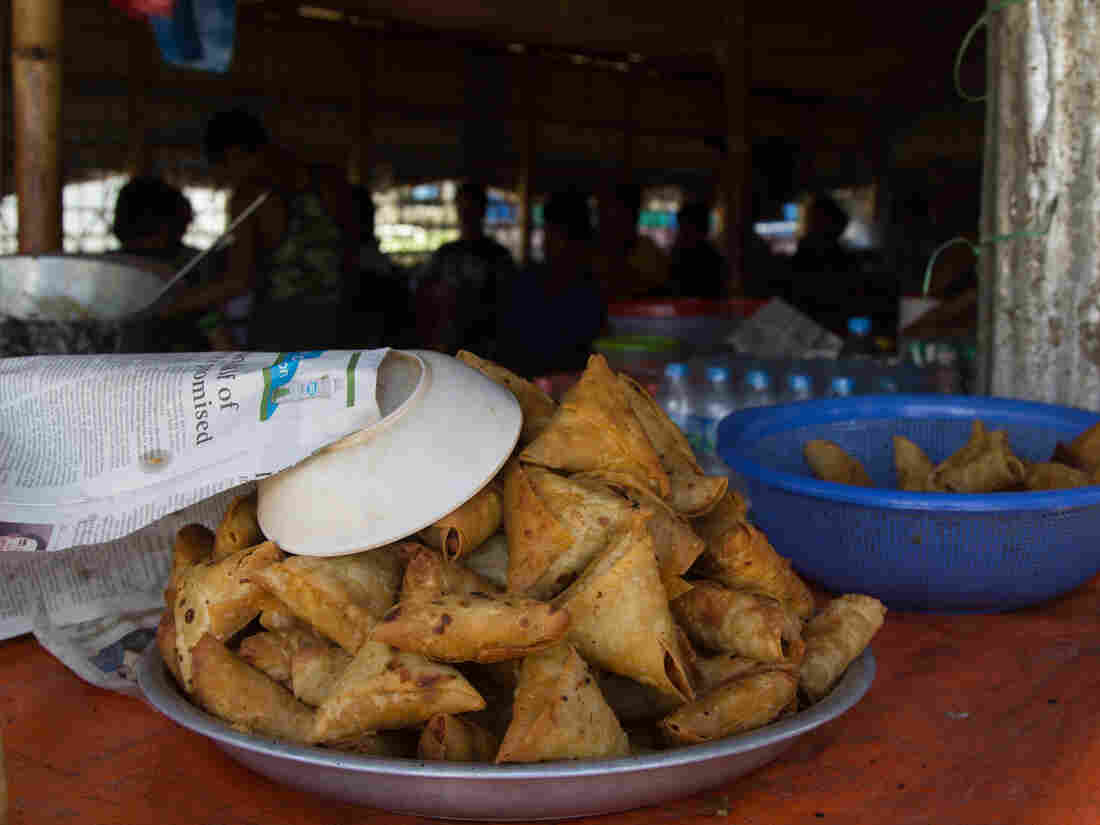 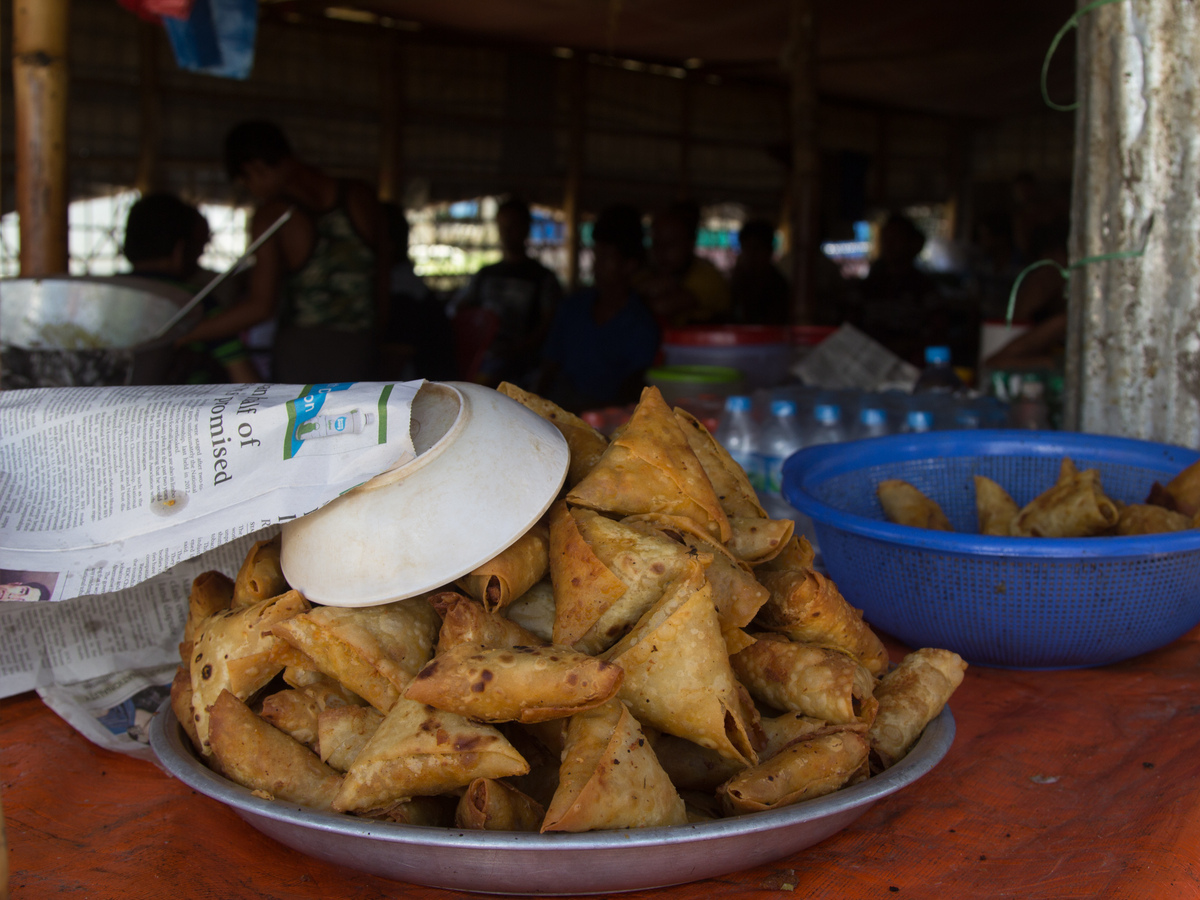 "If a man is jobless, he's not respected by the people," Rokim says. "That's why I opened this restaurant, to sell things and make a living."

Back in Myanmar, he had a wholesale grocery business and also sold diesel fuel from his shop, he says. His current restaurant, like most structures in the camps, is made out of tarps strung over bamboo poles. The floor is dirt. There are a dozen mismatched plastic tables surrounded by plastic chairs of various colors and sizes.

During the day, a television in the corner blares a Hindi action movie called Commando 2. When European soccer matches are on, he stays open late so customers can watch the games.

He's settling into his new life. He now has a half-a-dozen people working for him, cooking, clearing tables, washing dishes.

"I expect to be here at least five years," he says.

The United Nations refugee agency says the Rohingya will not be forced back to Myanmar and any repatriation will be voluntary. This poses significant challenges for Bangladesh. Cox's Bazar town is a beach destination on the Bay of Bengal. The nearly 1 million Rohingya refugees in the area now vastly outnumber residents of this seaside resort.

And if other refugee crises are any guide, the longer the Rohingya stay, the less likely it is that they will ever leave. The U.N. refugee agency says that among what they call "protracted" refugee situations, the average refugee is now displaced for 26 years.