Accessibility links
Flooding Still A Threat To Hawaii As Hurricane Downgraded To Tropical Storm Landslides and floods closed roads in parts of Hawaii's Big Island as Lane was downgraded to a tropical storm. Five tourists were rescued by emergency crews. 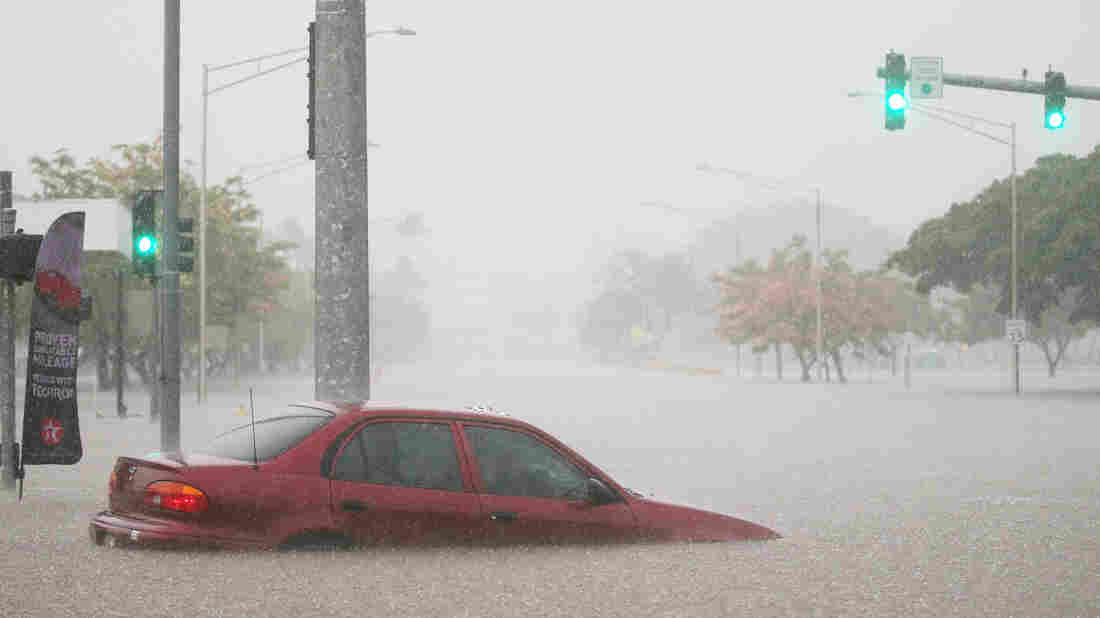 A car is stuck partially submerged in floodwaters from Hurricane Lane rainfall on the Big Island on Wednesday in Hilo, Hawaii. Mario Tama/Getty Images hide caption 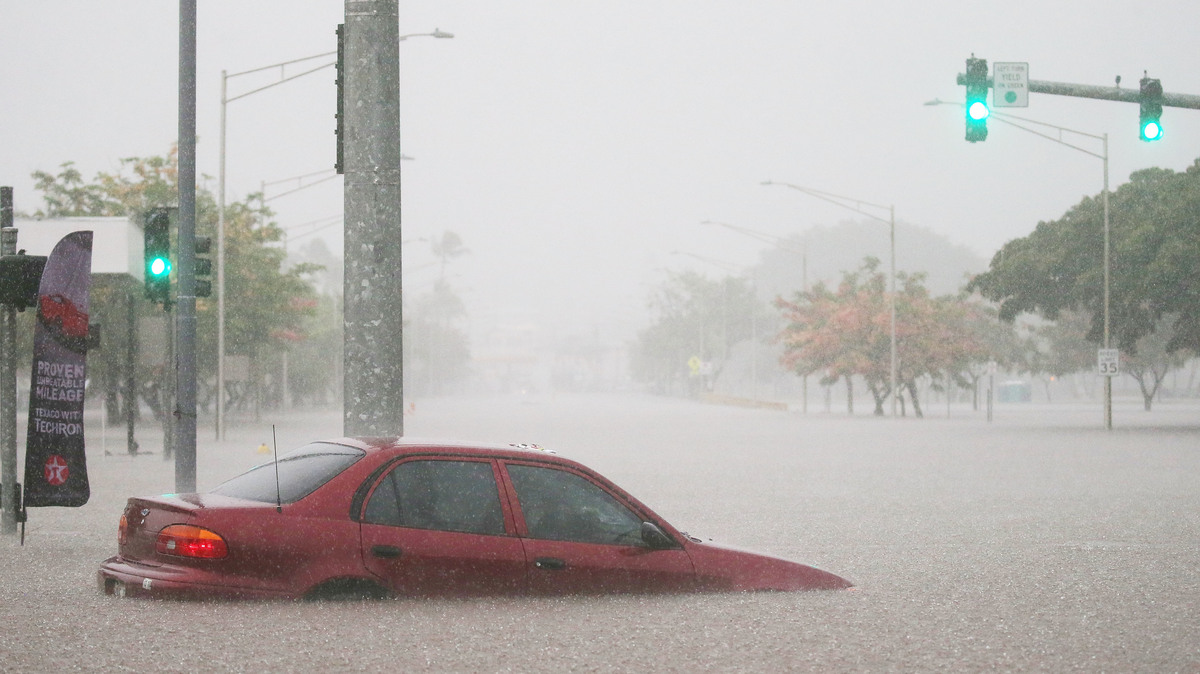 A car is stuck partially submerged in floodwaters from Hurricane Lane rainfall on the Big Island on Wednesday in Hilo, Hawaii.

Hurricane Lane weakened Friday evening as it headed toward Hawaii.

The National Weather Service said "Lane weakens to a tropical storm south of Oahu but rain bands will still bring more flooding and damaging winds to parts of the main Hawaiian Islands."

Though the hurricane had been downgraded to a tropical storm, maximum sustained winds of 70 mph brought warnings of potential damage as it moved west toward the island of Oahu.

Extreme flooding has happened on Hawaii's Big Island — more than 3 feet of rain had fallen in some areas and a flash flood watch for 28 zones was extended until Saturday evening.

Emergency workers rescued five tourists visiting the Big Island from California, The Associated Press reported. They were renting a house in the town of Hilo when a gulch overflowed.

Hawaii County's Civil Defense Agency said Thursday night that there was no mandatory evacuation in effect, though police and fire officials were advising residents in the Reeds Island area to evacuate. The agency listed six locations open as shelters.

The National Weather Service in Honolulu tweeted that the Hakalau weather station had received more than 31 inches of rain.

Landslides and flooding forced roads to shut down on parts of Hawaii Island, another name for the Big Island. The island is the largest in land area of Hawaii's islands, but is largely rural.

More than 14 landslides hit Highway 19 in the area of Honomu forcing four road closures, the Hawaii Department of Transportation said. The government listed more than a dozen other road and bridge closures. 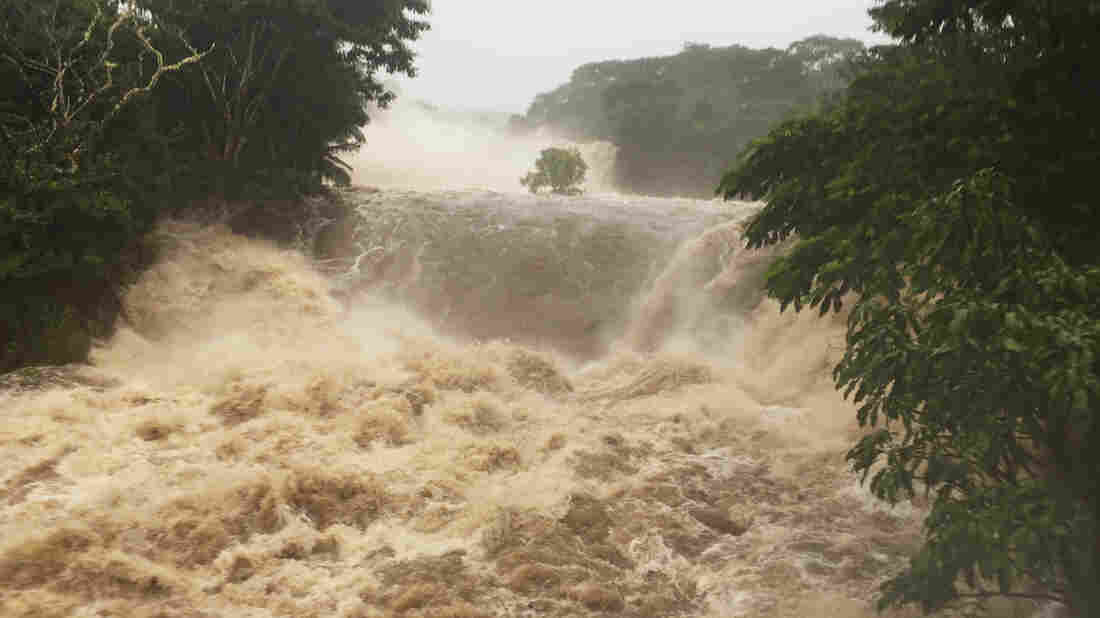 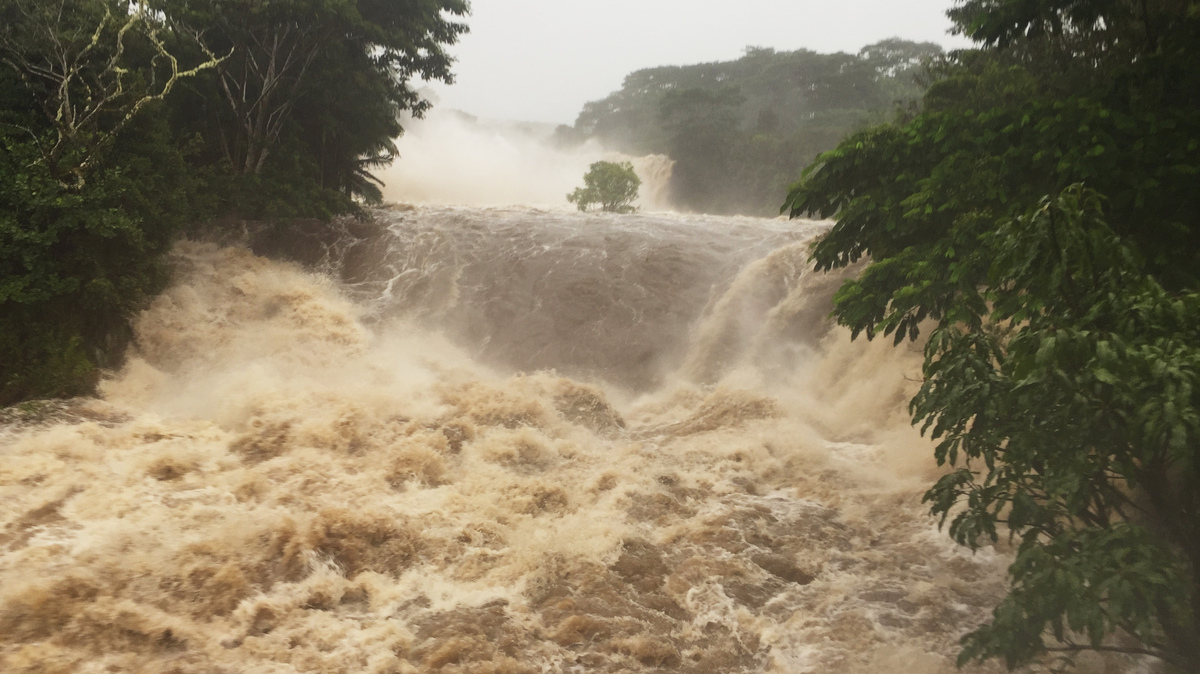 The Wailuku River near Hilo, Hawaii on Thursday.

On the next island over, Maui, the governor said at least 264 people, visitors and residents, were using evacuation shelters on Thursday night. Almost 2,000 customers on the island lost power, according to Maui Electric, but for most, it was quickly restored.

Most of Hawaii's population lives on Oahu island, where Honolulu is located, and which is still awaiting the full force of the storm.

As workers piled sandbags and boarded up store windows, pictures showed many still enjoying the waves of Honolulu's Waikiki Beach Thursday. Police reportedly later told swimmers to get out of the water.

A hurricane warning was in effect for Oahu and Maui County late Thursday, and tropical storm conditions were already happening in both areas as of late Thursday local time.

Rainfall could reach 30 to 40 inches in certain areas of the Hawaiian Islands, the National Weather Service said, and accumulations more generally of 10 to 20 inches.

Brooke Bingaman, a meteorologist with the National Weather Service, told NPR's Here & Now that the surf poses danger. "We could see anywhere from 15 to 25 foot waves approaching some of the shores."