Accessibility links
Rumors Of The Death Of The Rom-Com Are Greatly Exaggerated The success of movies like Crazy Rich Asians and Netflix's recent summer offerings may signal a resurgence of a sometimes beloved and sometimes bemoaned genre: the romantic comedy. 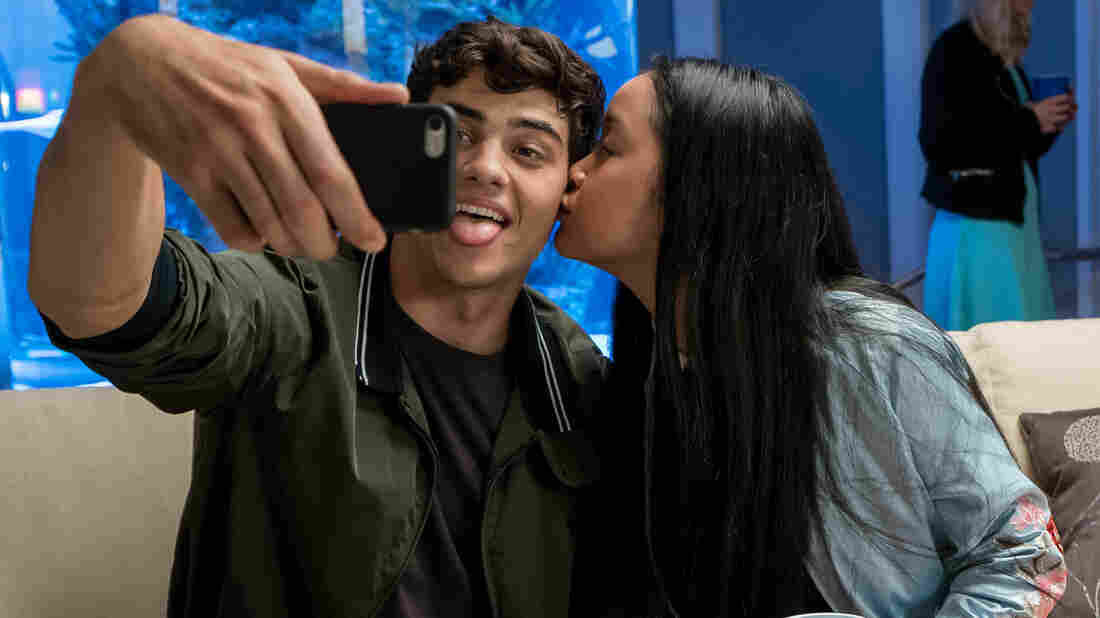 Noah Centineo and Lana Condor in To All The Boys I've Loved Before. Netflix hide caption 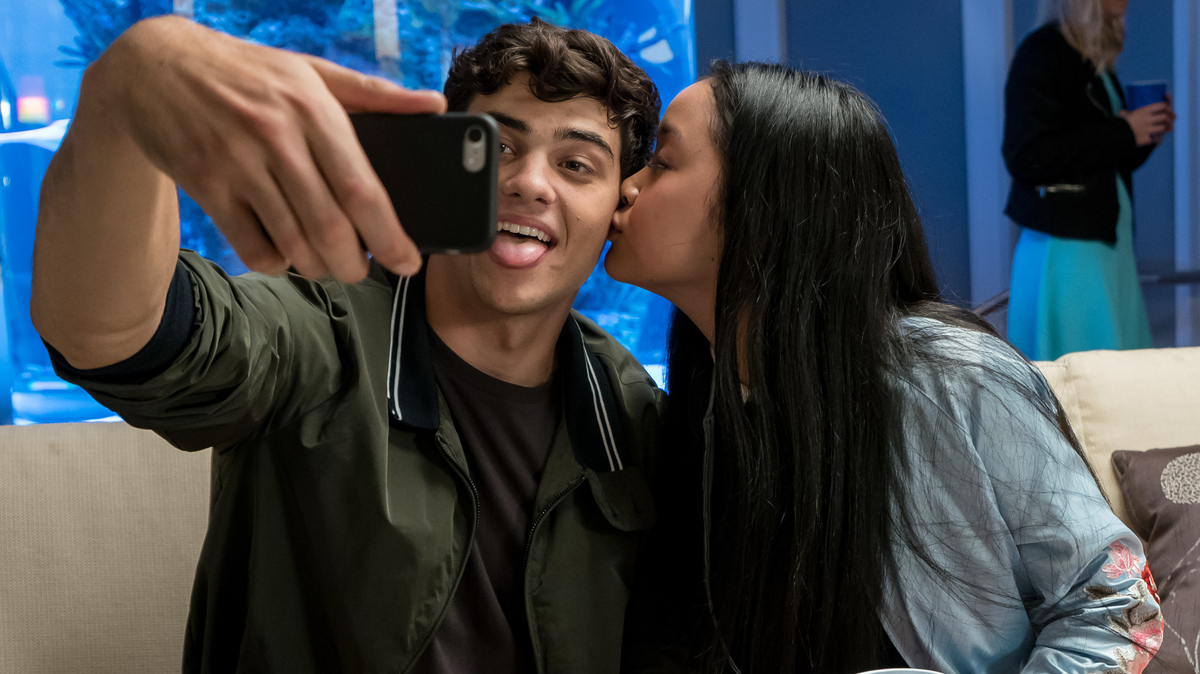 Noah Centineo and Lana Condor in To All The Boys I've Loved Before.

The debate about whether romantic comedies are — or ever were — dead is an old one by now. In fact, I wrote about it five years ago.

It's a sad but true fact that genres that fall between giant big-budget tentpoles and itty-bitty indies have receded in the last 20 years or so: the adult drama, the sports movie, the live-action family movie, and yes, the romantic comedy. It's not a complete vanishing: Rom-coms continue to be made, and they continue to be recognized. 2017's The Big Sick is an example that managed both a sizable audience and an Oscar nomination (for best original screenplay).

But we certainly don't have the abundance of sunny rom-coms that we did from, say, the late '80s through the early aughts: When Harry Met Sally and Sleepless in Seattle, yes, but also While You Were Sleeping and Clueless and Bridget Jones' Diary. Maybe it's changes to the business, maybe it's the declining quality of scripts (does the genre have a new Nora Ephron? — of course not, nor could it ever), or maybe it's that we don't have the durable stars we did then who want to work in such a likability-driven form.

Come to think of it, maybe we've even made it nearly impossible to have those stars. To quote that piece from five years ago that's even truer now:

... We're not going to enter another "golden age" until we address the epidemic of weirdly aggressive actress-hating that seems to befall anyone who trades on straight likability. Right now, you can get away with being a sort of cool-girl likable, like Emma Stone and Mila Kunis are, and like Jennifer Lawrence is. (This is no knock on any of them; they're all immensely likable, at least to me.) But the classic romantic comedy trades on audiences not having already decided that they hate the actress, so if we're going to devote full-time journalism beats to hating Anne Hathaway (and Jennifer Aniston and Lena Dunham and Katherine Heigl and Sandra Bullock and Gwyneth Paltrow and Julia Roberts and Kate Hudson), we're going to have trouble asking audiences to embrace the kind of low-cynicism energy that good romantic comedy requires. I mean, Katharine Hepburn had haters as it was, and that was the 1930s. If she — or even Audrey Hepburn — had existed in the age of the internet, do you really think they could have remained so loved? Or, in Katharine Hepburn's case, come back from the early sense that people didn't like her?

Take note: Jennifer Lawrence is no longer neatly on the right side of this equation. Neither is Emma Stone. In fact, Lawrence recently interviewed Stone for Elle and — guess what! — it wasn't universally received as adorable.

Still, we find ourselves in the middle of what many of us hope is a rom-com resurgence. The current box-office hit Crazy Rich Asians is partly a romantic comedy, though it's not the classic meet-cute kind. It's the meet-the-parents kind. What it does have is swoon-worthy beauty, wacky friends and a makeover, all of which are classic rom-com elements.

Much of the action at the moment, though, is on Netflix, where they're cranking out what a lot of us loved in the '90s — straight-up, unapologetic, sparkly-eyed rom-coms.

Note well: this isn't to say they're all good. The runaway winner for quality is To All The Boys I've Loved Before, adapted from Jenny Han's YA romance, starring Lana Condor and Noah Centineo. It's impeccably cast (which is half the battle), it's well written and directed, and it has brought out in viewers what Alanna Bennett at BuzzFeed has cleverly — and accurately — termed "radical softness."

Set It Up, which was released in mid-June, was also chatted up favorably on social media, although it's not nearly as deeply felt or as well executed as To All The Boys. Its story of a couple of assistants trying to force a romance between their bosses was appealing mostly because it was such pure romantic comedy, such pure artifice that you rarely see anymore in service of the real center of any rom-com, which is Cute People Flirting.

The Kissing Booth, starring Joey King as a girl stuck between a possessive best friend and his possessive older brother, has its partisans. Given that its story romanticizes both violent tempers and boys fighting for control of a girl's sexuality, I am not one of those partisans. (By which I mean to say: It's very bad.)

But! The good and the bad often appear together. If Netflix is going to crank out original movies along these lines — thus dropping what once seemed to be its plan to make its reputation for original films on the back of Adam Sandler — then they won't all be successes. Theatrically released romantic comedies weren't either, which you know if you ever saw The Ugly Truth. (I hope you didn't.) What matters is staying in the game.

What's more, Netflix's first best rom-com meant a lot to another underserved audience: The one that doesn't want romantic comedies to be dominated by white casts and writers, as they were in previous "golden ages" (which is not to dismiss films that broke that pattern, like Brown Sugar and Hitch). Jenny Han wrote a lovely piece for The New York Times that was in part about how hard it was to find a production company that wanted to have her heroine, Lara Jean — who was Asian-American in the book — played by an Asian-American actress. Netflix does some things well and some things poorly, but it does seem to have an interest in wriggling into spaces where more content would be welcome (as with comedy specials and baking shows). If that — and the success of To All The Boys — brings a broader variety of love interests to the screen, then all the better. (So far, this little mini-run has entirely heterosexual couples; there's no reason that needs to be the case in the long run, and I'd bet it won't be.)

So fear not for the future of the romantic comedy — the collision in a public place where people drop their possessions, the mistaken identity, or the idea of pretending to date your obvious perfect match. Don't worry about the encouraging sidekick, the wise older person with their own rich history, or the fight that takes place in the rain. The meaningful glance, the misunderstanding, and the fancy party where the person who seemed ordinary suddenly seems extraordinary? They will all do fine. They will all persevere. The screen might get smaller, but the heart will swell, just the same.