Accessibility links
Democratic 'Superdelegates' Reforms Reduced Role In Presidential Nomination Party leaders who have voted on the nominations of Democrats' presidential candidates for three decades, unbound by primaries and caucuses, will now only weigh in if a convention is deadlocked. 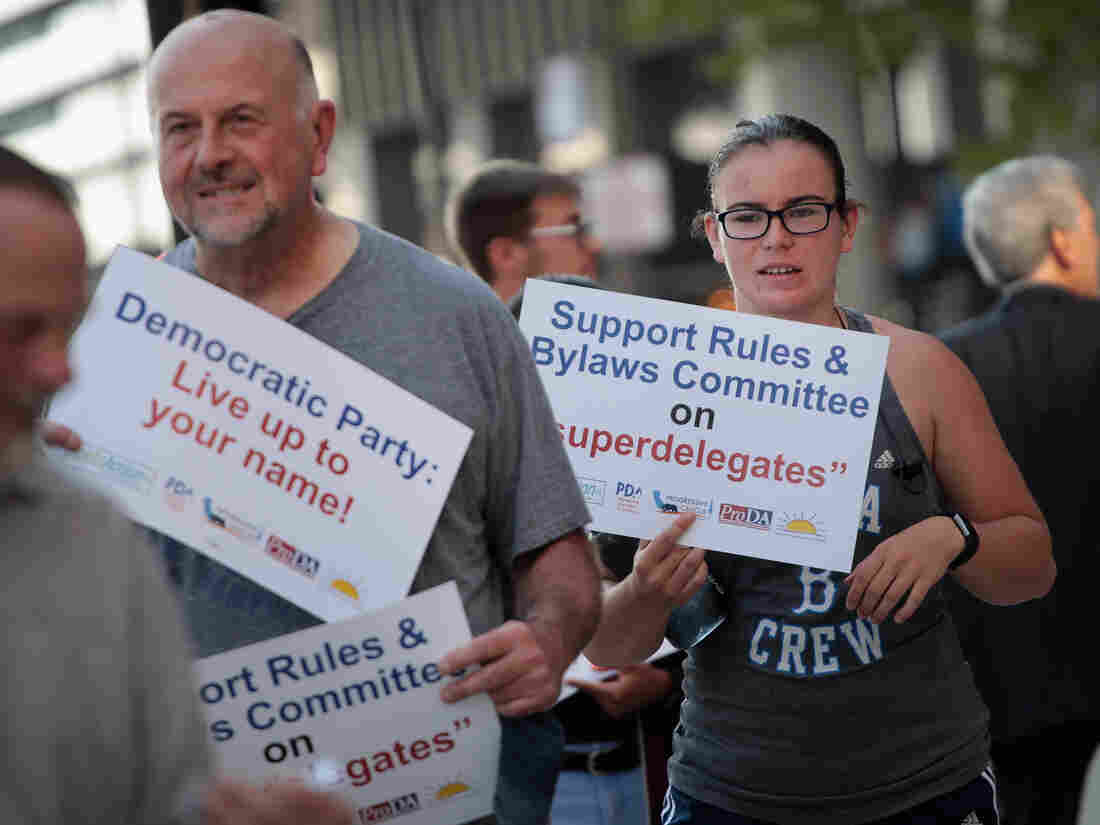 Demonstrators gather outside the Democratic National Committee's summer meeting to protest the use of "superdelegates" in the party's presidential nomination process. The DNC voted to drastically reduce their role this weekend. Scott Olson/Getty Images hide caption 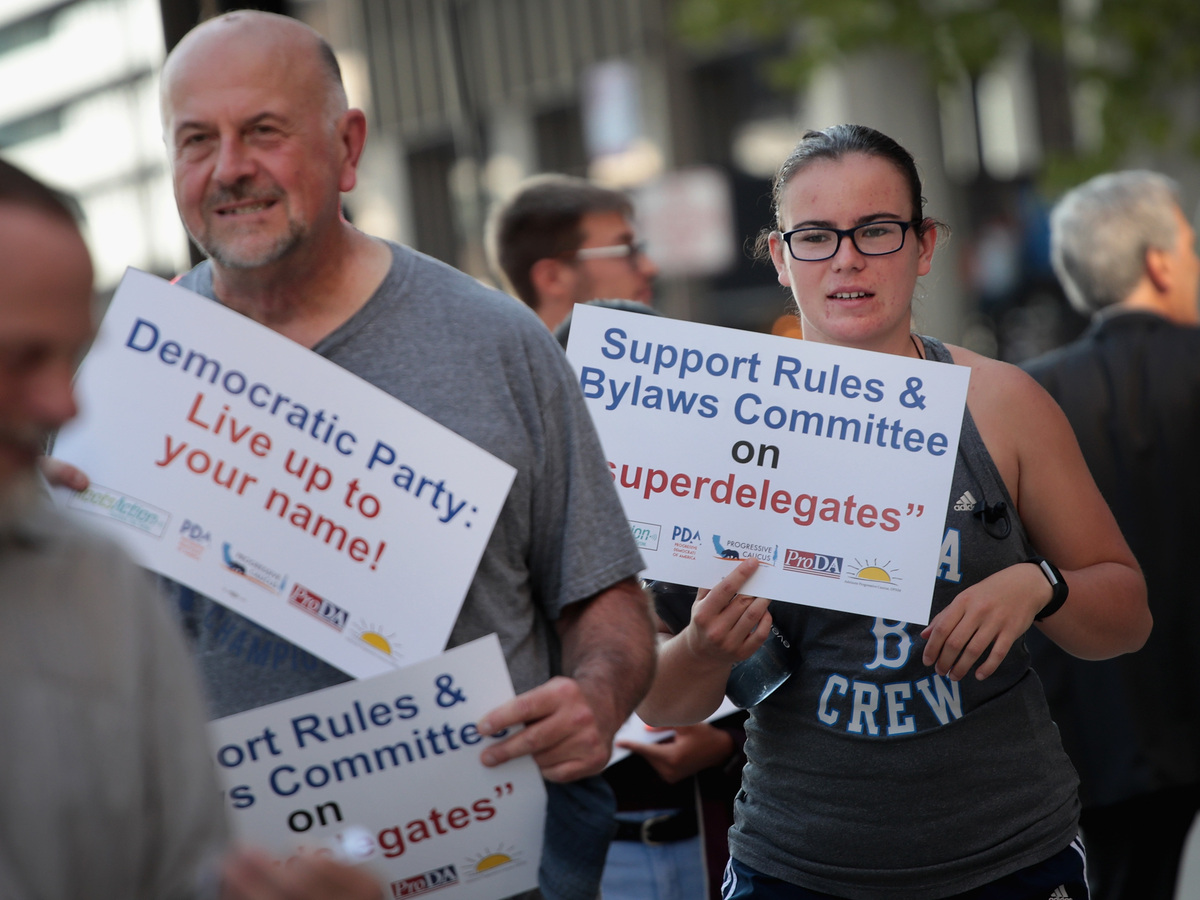 Demonstrators gather outside the Democratic National Committee's summer meeting to protest the use of "superdelegates" in the party's presidential nomination process. The DNC voted to drastically reduce their role this weekend.

The Democratic National Committee dramatically reduced the power and influence of "superdelegates" in selecting the party's presidential nominee at its summer meeting in Chicago on Saturday, ahead of what's expected to be a wide-open Democratic field in 2020.

DNC members voted on a proposal to take away the role of elected officials and other party dignitaries in selecting a nominee at the Democratic convention — leaving it up to delegates selected in primaries and caucuses only — unless the process becomes deadlocked.

Opponents of the move stood down and the measures were adopted in a voice vote. A DNC panel overwhelmingly approved the move earlier this summer.

The reforms adopted also encourage states that hold presidential caucuses, run by state parties, to switch to primaries, administered by state and local election officials. They require states with caucuses to provide for absentee participation, citing barriers to participation ranging from military service to child care to disability.

The proposal had broad support among the top leaders of the DNC, including chairman Tom Perez and vice chair Michael Blake.

Rallying his party ahead of national elections in 2018 and 2020, Perez told the party members gathered in Chicago on Saturday, "Folks, what we all have in common is we're here to win elections."

Vermont Sen. Bernie Sanders, whose supporters pushed for reforms after the contentious 2016 primary, expressed approval of the vote. "Today's decision by the DNC is an important step forward in making the Democratic Party more open, democratic and responsive to the input of ordinary Americans," Sanders said in a statement. "This has been a long and arduous process, and I want to thank Tom Perez and all of those who made it happen."

The 2016 Democratic primary was fought bitterly for a number of reasons, but the issue of superdelegates — who are unbound by primary results and free to support whichever candidate they choose — loomed large over the fight between Hillary Clinton and Sanders, whose supporters railed against the party establishment.

That's despite the fact that the votes of superdelegates never overturned those of primary voters in picking the Democratic presidential nominee, since they were first part of the process in the 1984 election.

In 2016, Clinton overwhelmingly earned the backing of the party's superdelegates. She also won the majority of delegates decided in primaries and caucuses, but many Sanders supporters felt that support from the party establishment was an unfair advantage that gave her campaign an aura of inevitability. They saw the process as a means by which the Democratic establishment could prevent outsider candidates from seriously contending for the nomination.

After the 2016 election, the DNC's Unity Reform Commission recommended drastically reducing the number of superdelegates. Instead, the DNC's Rules and Bylaws Committee voted 27 to 1 in June to prevent superdelegates from voting on the first round of ballots at presidential nominating conventions.

"No candidate should have an accumulated lead, whether real or perceived, before a first ballot is cast," Perez said at the time.

The proposal won support among progressive Democrats and lawmakers, including Sanders, as well as outside activists. Michigan Education Association president Paula Herbart told NPR that she believes the proposal will help keep the Democratic Party relevant.

"We've always said that we are the party of all, and we are proving it by working this resolution and moving and changing our rules," Herbart said. "When we include all voices, we have the power to move mountains."

But some opponents launched a last-ditch effort to sink the proposal at this week's DNC meeting, arguing it disenfranchises top party officials.

"We're up against a wall," Bob Mulholland, a superdelegate from California, told Politico this week. "We're going to fight it like hell."

In a letter to Perez, Rep. Cedric Richmond, D-La., the chairman of the Congressional Black Caucus, made a similar argument, saying the proposal would "disenfranchise elected officials for no substantive reason and would create unnecessary competition between those elected and their constituents."

"The thought that a member of Congress would have to compete with their constituents in an election to secure a first ballot vote on the party's nominee creates unnecessary friction between those elected and the people they are elected to serve," he wrote.

"At a time when we're trying to figure out as a party if we're gonna disenfranchise those who are party leaders, party officials, party donors, party activists and [the] grassroots, I think this would just really kick the you-know-what out of us," said Brazile, who stepped in as DNC chair during the middle of the 2016 campaign after Florida Rep. Debbie Wasserman Schultz was forced out over evidence of DNC bias against Sanders.

While Brazile has spoken out against superdelegate reforms, she abstained from voting on similar proposals in prior committee and caucus meetings.