Accessibility links
Ashes To Ashes, Funk To Funky: Questions For Jason Heller, Author Of 'Strange Stars' Critic and author Jason Heller's new book traces the considerable influence of David Bowie on the science-fiction inflected music of the 1970s, from "Space Oddity" to the glittery glory of Funkadelic. 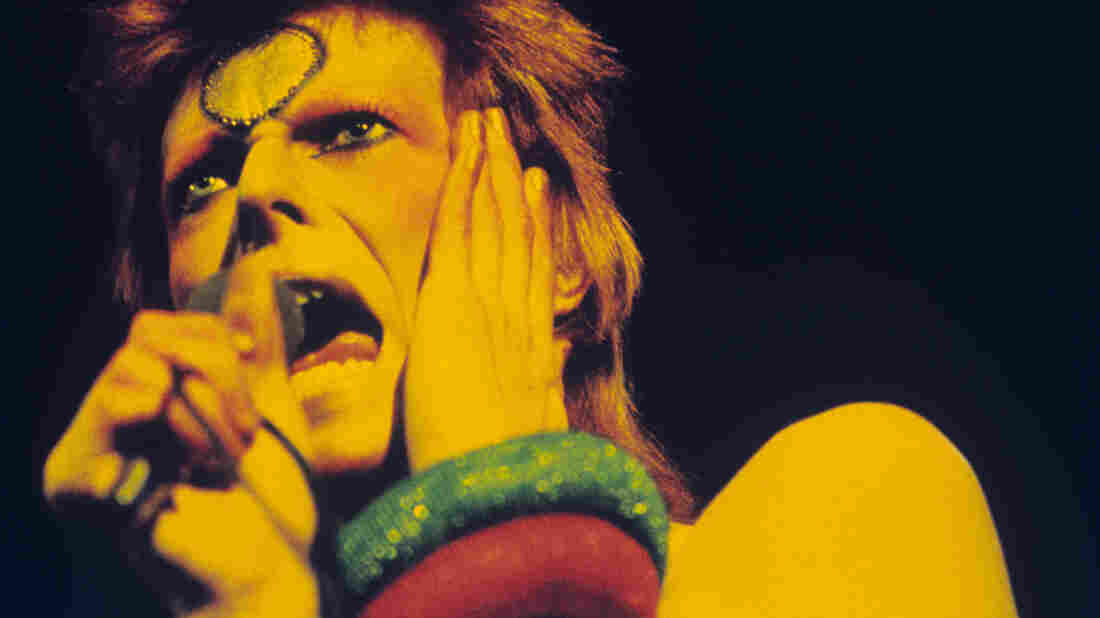 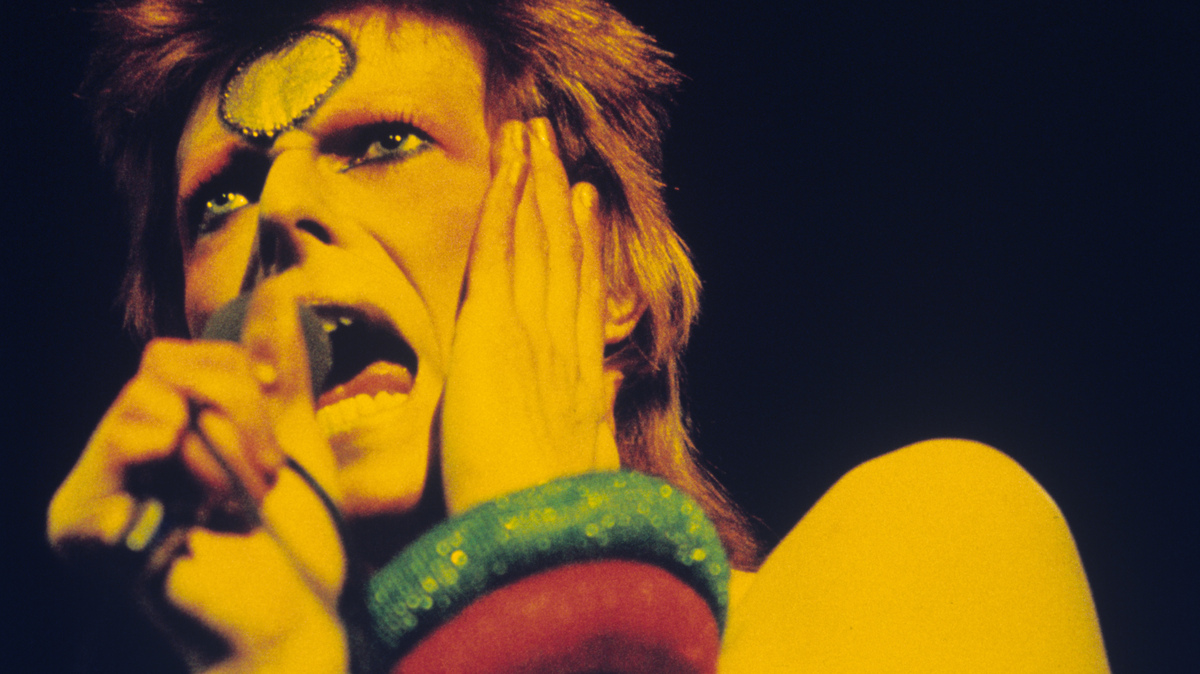 David Bowie performs in character as Ziggy Stardust, in a 1973 show in London.

David Bowie kind of bookends the 1970s – between "Space Oddity" in 1969 and its sequel "Ashes to Ashes" in 1980, music and science fiction crossed the streams in a way that hasn't been seen before or since – from Bowie to Funkadelic, suddenly, space was the (musical) place. 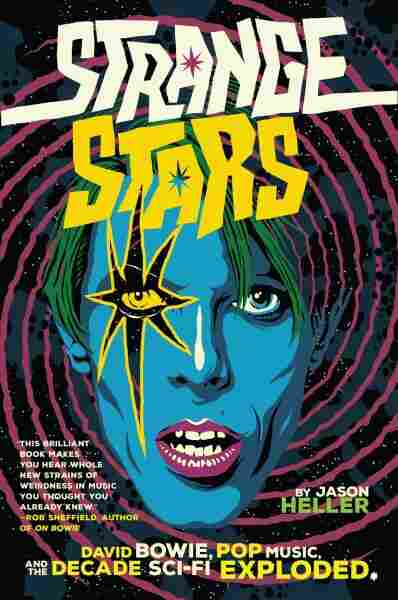 Author (and occasional NPR critic) Jason Heller was a kid with his ear glued to the radio during that era, enthralled by the idea that sci-fi movies, books and music could have a kind of conversation. It's a conversation that inspired his new book, Strange Stars: David Bowie, Pop Music, and the Decade Sci-Fi Exploded. Heller says he decided to focus on Bowie because "he was my first guide into the world of science fiction music. It was always my intention to have him as the main character, so to speak, of Strange Stars. He's so emblematic of the entire idea that sci-fi can be expressed through popular music, and I think he occupies that position for so many people."

Bowie actually turned away from sci-fi music halfway through the 1970s, taking on a new persona as the Thin White Duke. But, Heller tells me in an email conversation, "there isn't a chapter of the book where Bowie doesn't appear, either as a participant or as a clear and vocal influence on what's going in sci-fi music or cinema during whichever year of the '70s that chapter covers."

In fact, Heller says, Bowie's shift away from sci-fi is a major turning point in the book. "And of course," he adds, "I dwell on his time filming his iconic sci-fi role in The Man Who Fell to Earth ... And it all comes full circle at the end of the book, when Bowie releases "Ashes to Ashes" in 1980 as his sequel to 1969's "Space Oddity."

Why do you think the '70s were such a fertile decade for sci-fi music?

"Space Oddity" was a dramatic example of how space exploration, science fiction, and pop music could dovetail into something that captured the collective hopes and anxieties of the human race.

The '70s were ushered in by the Apollo 11 moon landing in the summer of 1969, and "Space Oddity" was a dramatic example of how space exploration, science fiction, and pop music could dovetail into something that captured the collective hopes and anxieties of the human race, which had with relative suddenness become able to walk on other heavenly bodies.

It was a profound shift in how we see ourselves, and the universe as well, and it happened just as rock and R&B music was experimenting with a new kind of progressive sound and approach, one where it was encouraged to push boundaries, be ambitious, and expand the scope of what pop music could do. As the '70s continued, the rock counterculture found a lot of parallels with science fiction: Here was a form of literature that dealt with the expansion of consciousness, the reorganization of societies, and vast philosophical questions that grew naturally out of the psychedelic movement of the '60s. But also, as nonfiction books like Alvin Toffler's Future Shock alarmed people with the potential drawbacks of accelerated technology, so did music of that decade reflect the fears of a civilization going through some climactic changes.

There are really two parallel stories here, I think ... Bowie and his starchildren in the UK, and then on our side of the pond, Sun Ra and later Parliament/Funkadelic

There was definitely a lot in common between Bowie and Parliament. Both were cult acts that broke into the mainstream on their own terms. Both took the look of glam to bold new conceptual heights. And both dealt with outer space and aliens as symbols of humankind's increasingly uncertain place in the order of the universe.

Travel To The Moon With David Bowie (360° Video)

Science fiction disco, or space disco, was a real thing, and it was huge. Once Meco proved all the music-industry doubters wrong by making a success of his disco version of John Williams' Star Wars theme in 1977, it opened the floodgates. Some space disco artists were just dressed up in glittery outfits and handed lyric sheets that were vaguely sci-fi in theme, while others were deeply into the ideas of futurism, especially as European electronic music began crossing over with the dominant American disco style. Disco didn't die in 1980, as so many have said in retrospect. It simply transformed into something else, a sound that served as the template for a huge chunk of '80s pop music. And space disco, uncelebrated as it is, was a big component of that new sound. Also, it's just fun as hell. Disco music about robots and aliens? What's not to love?

There are a few books that appear over and over again, particularly 1984 and Dhalgren. Going beyond the generally dystopian feeling of the 1970s, why do you think those two books were so important?

There's no doubt that certain novels were more of an influence on '70s sci-fi musicians than others, and 1984 is by far the biggest. Not only was it a book most likely assigned by teachers when these musicians were kids, it resonated with everyone at the time who felt individuality was being sacrificed to moral watchdogs, corporate concerns, and the military-industrial complex during the Vietnam War. Samuel R. Delany's Dhalgren exerted a different kind of influence, underscoring the idea that narratives, including concept albums, didn't need to be linear or hew to any logic except their own.

You spend some time talking about Rush. Does this mean I have to start liking Rush?

No one has to like Rush! I love them, but it's all a matter of individual taste, of course. I hope that Strange Stars prompts people to listen to Rush, and so many other of their contemporaries, in a new light, regardless of whether the reader likes them already. There's a lot of music appreciated in the book, but it's also about placing all this music into a different context than it usually gets. There's a story underlying all of it, and you don't have to enjoy all the music mentioned to get the gist of the story. That said, if a few people come away with a newfound love of Rush or Parliament or Gary Numan or Devo or Jefferson Airplane, or even if they simply discover a bunch of great music they'd never heard before, I won't complain.