Accessibility links
Following Disputed Election, Mnangagwa Sworn In As Zimbabwe's President President Emmerson Mnangagwa delivered a conciliatory speech in which he promised to govern for "all Zimbabweans." The opposition leader insisted that Mnangagwa was illegitimate. 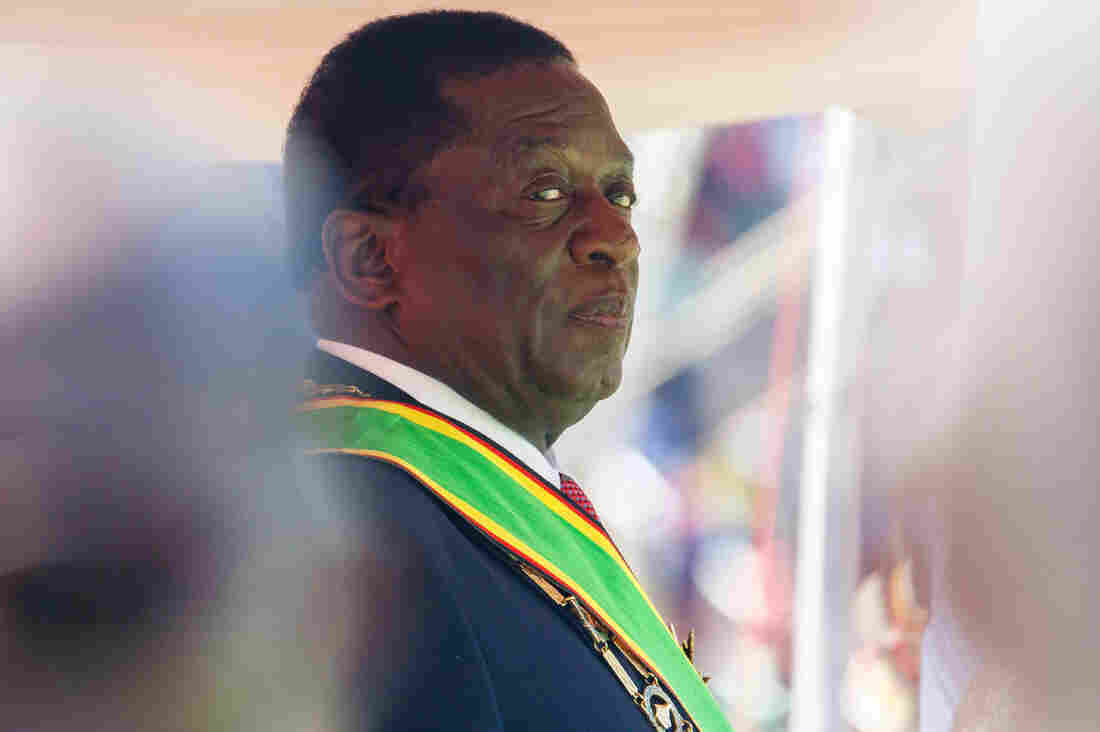 Emmerson Mnangagwa looks on during his official inauguration ceremony as the President of Zimbabwe at the National Sports Stadium in the capital Harare. Jekesai Njikizana /AFP/Getty Images hide caption 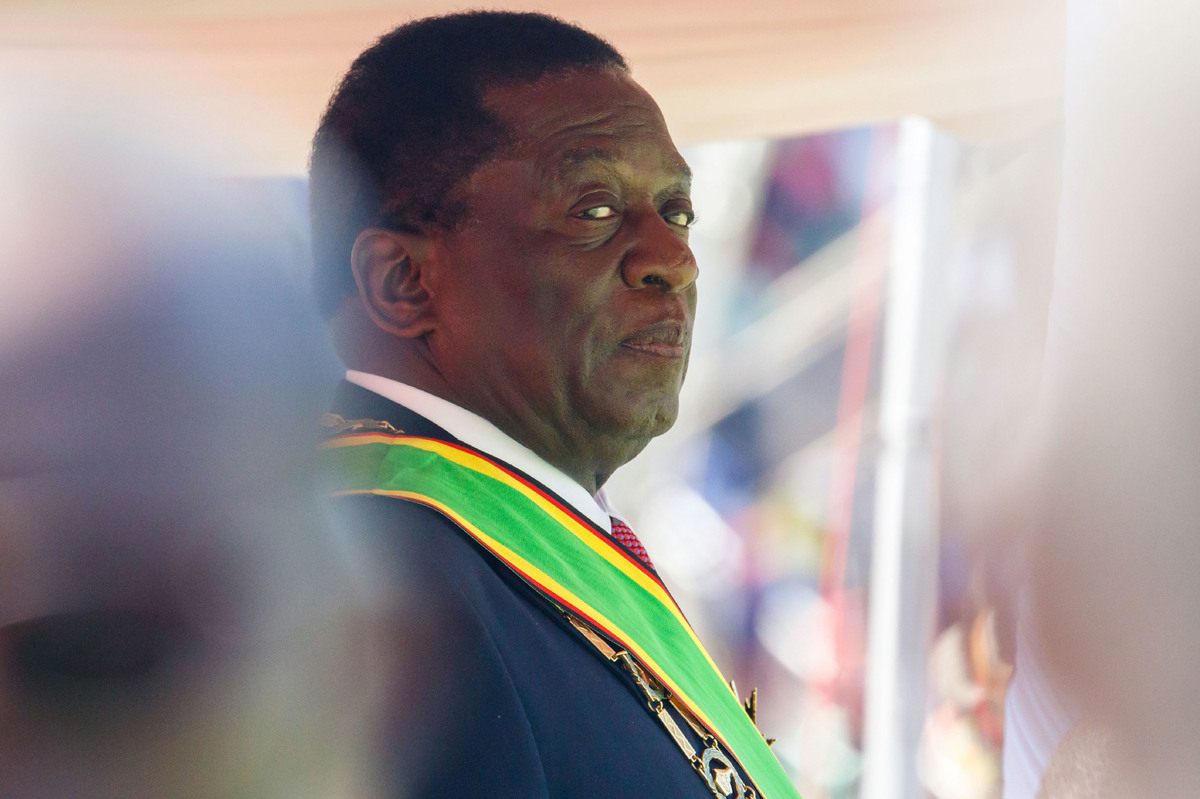 Emmerson Mnangagwa looks on during his official inauguration ceremony as the President of Zimbabwe at the National Sports Stadium in the capital Harare.

The stands at Zimbabwe's national stadium in Harare were filled with tens of thousands of people celebrating the victory of President Emmerson Mnangagwa.

Many of the women wore wraps printed with Mnangagwa's smiling face. The men wore his signature scarf: Red, green, yellow, white and black, like the colors of the country's flag.

This dude on the left takes best use of ruling party fabric. #zimbabwe #EDinaugaration pic.twitter.com/AOOq7OU6Ye

Mnangagwa sat alongside the presidents of South Africa, Rwanda, Democratic Republic Congo and Zambia on Sunday, smiling, seemingly relieved that this tense, historic process was at least legally over.

He took the oath office and then, one by one, the head of each security agency pledged allegiance to him. In his inaugural address, Mnangagwa took a conciliatory tone.

"The vision of a new and prosperous Zimbabwe, the Zimbabwe we want, is a shared one and transcends political party lines," he said. There was no hint of the military man who enforced government repression using deadly means during the Mugabe era. "As your President, I pledge to act fairly and impartially, without fear or favor, as a President of all Zimbabweans. I am your listening President, a servant leader."

What was left unsaid is that Zimbabwe is still a deeply divided country. Mnangagwa came to power in November, after the military helped him oust longtime leader Robert Mugabe, even though the two are from the same party, the long-ruling Zanu-PF.

Mnangagwa ushered in an era of historical civic freedoms: Police checkpoints were lifted and for the first time in decades Zimbabweans were allowed to air political views. On election day, last month, many of them said that for the first time, they felt free to walk into a polling place and vote their heart.

However, all of that hope for a new Zimbabwe quickly fizzled. The opposition accused the electoral commission of delaying the release of results so they could cook the numbers and hundreds of people took to the streets of the capital Harare. The military repressed the protests, killing six people. With 50.6 percent of the vote, Mnangagwa was declared the winner and his victory was upheld by a unanimous Constitutional Court opinion last week.

Mnangagwa briefly mentioned the violence. He expressed condolences to the families of those who lost loved ones and promised an independent commission would look into the government's reaction.

"Such conduct should be alien and vile to our nature, culture and traditions as the Zimbabwean people," he said.

The day before, opposition leader Nelson Chamisa said he was not letting this go. The more liberal civic freedoms ushered in by Mugabe's ouster, he said, are not enough.

"There is freedom of expression but there is no freedom after expression. There is freedom to vote but there is no freedom after a vote," he said. "In the rural areas people's houses get burned, destroyed, on account of expressing themselves. It's un-African, it is undemocratic, it is unacceptable. And this is the issue we must be able to resolve, because five years from now, 20 years from now, we will still have a vicious circle of disputed elections."

He intimated that street protests, which often turn violent in Zimbabwe, were still planned.

But over the past several days, few on the streets of Harare seem to have the appetite for a fight. The capital city is an opposition stronghold, but instead of protests or even anger, the mood of the city has been one of resignation.

This picture captures the mood of Harare, an opposition stronghold, after Mnangagwa victory was upheld by Constitutional Court. Lots of hope for change gone, just as spring takes a hold on the city. #ZimElections #ConCourt #zimbabwe pic.twitter.com/rcZvo33Mvx

Last Friday, after the Constitutional Court had thrown out Chamisa's challenge, everything went on as usual at Africa Unity Square, a colonial relic with gardens and a big fountain in the middle. Vendors sold ice cream with somber faces. Photographers stood idle because few wanted to freeze time. P.Y., who only gave me her initials because she feared retaliation, sat at a bench kicking around the fallen purple petals of a jacaranda tree.

Taking to the streets, the young woman said, could only lead to violence, so they have no choice but to go home and accept their fate.

"We just hope for something better because the decision is already made," she said. So we just keep on hoping that things will change to a better condition."

Maybe, she said, this is what God intended — that Zanu-PF, which has been in power since independence, stays there for another five years.