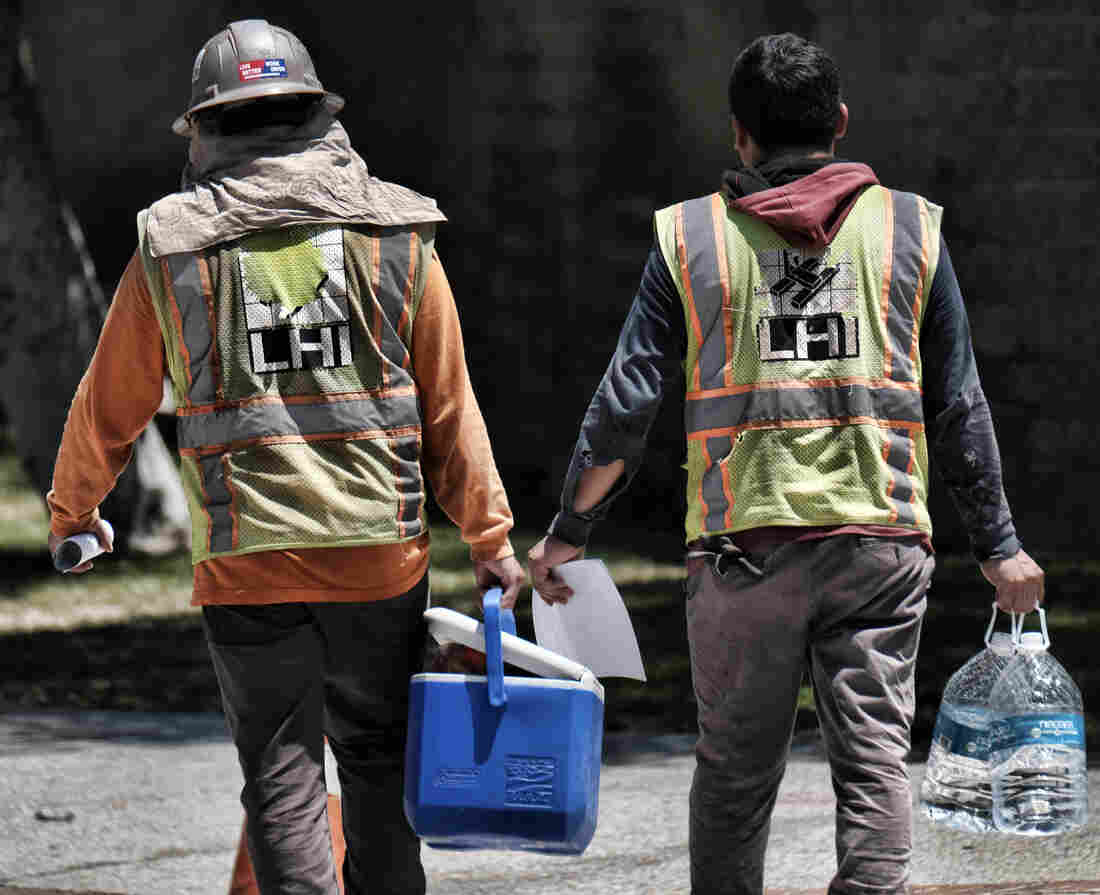 On a blistering hot day in southern California, construction workers carry large bottles of water during a break. Experts predict more intense and more frequent heat events across the country in coming decades, with huge implications for both indoor and outdoor workers. Richard Vogel/AP hide caption 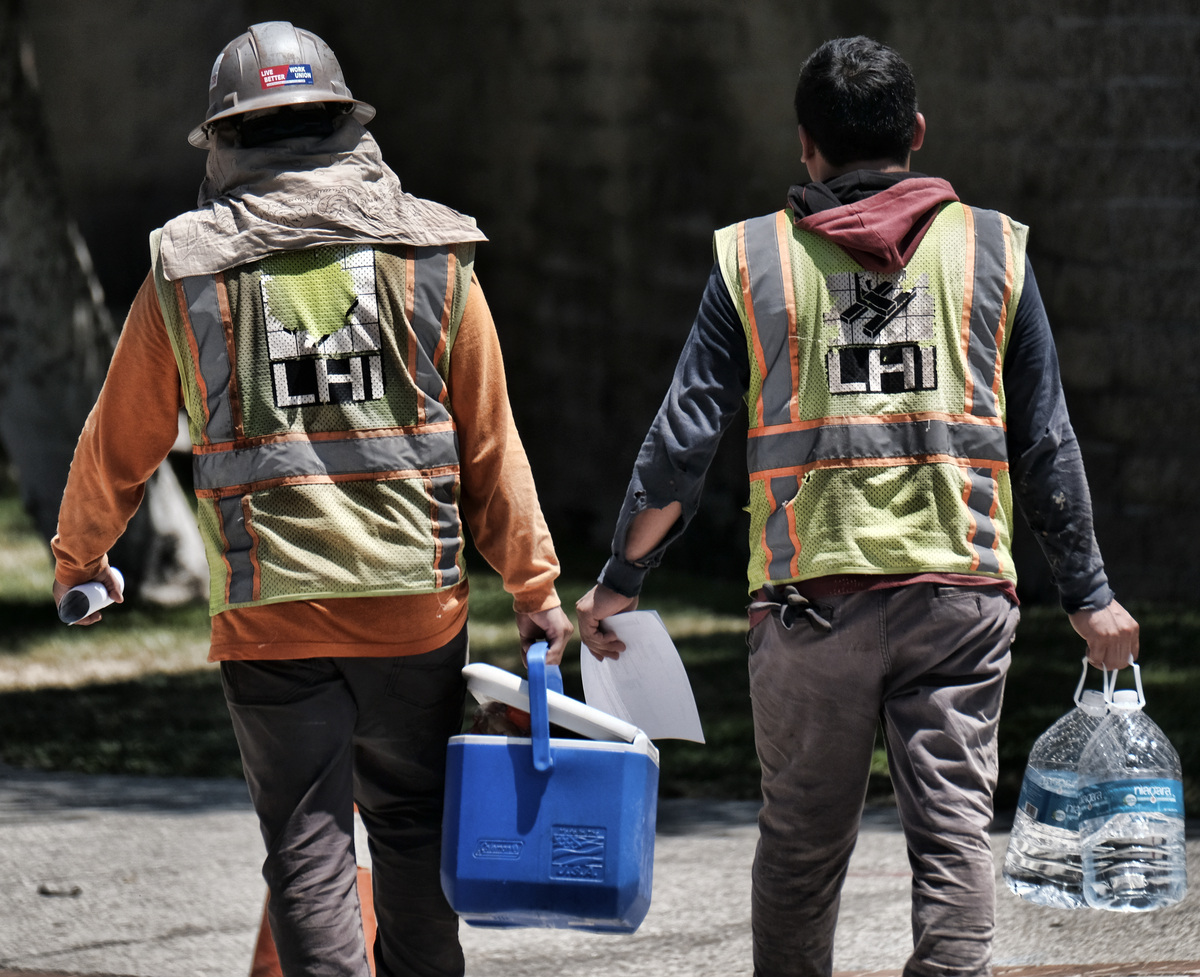 On a blistering hot day in southern California, construction workers carry large bottles of water during a break. Experts predict more intense and more frequent heat events across the country in coming decades, with huge implications for both indoor and outdoor workers.

Two years ago, James Klenk of Freehold, N.J. suffered a heat stroke and went into renal failure after several days sorting and unloading heavy boxes in the back of a UPS truck. He had been a driver for UPS for 14 years and almost died that day.

Klenk is one of countless workers across the country enduring symptoms of heat stress. High temperatures can pose health threats on a daily basis, including confusion, fatigue, and dehydration. More extreme heat can lead to heat stroke and organ failure, depending on a worker's environment and how quickly treatment is administered.

Theresa Klenk, James' wife, is a nurse who often treats symptoms of heat illness herself. She has started a petition on change.org — signed by over 380,000 people thus far — demanding that UPS provide air conditioning to all their drivers. The petition is set to be delivered to the company on Monday, August 27.

Climate change is projected to make an "already bad situation worse" for those working in excessive heat, according to a recent report and petition spearheaded by Public Citizen, a non-profit consumer advocacy group. Both NASA and the American Meteorological Society predict we can expect both more intense and more frequent heat events across the country in coming decades, with huge implications for both indoor and outdoor workers.

"The bricks heat up and then you walk in in the morning and you notice it's significantly warmer," says Ray Martin of his workplace in Eugene, Ore.

Martin is a cook and food services coordinator at Willagillespie Elementary school. He describes handling food around a 400 degree oven as fatiguing and often difficult to bear. When the weather heats up, he says, it's easily 20 to 40 degrees warmer in the kitchen than normal. "You're working overtime, you're exhausted all the time so you feel like you can't cool down," he says. "You're just constantly aware of how hot you are."

While Martin calls his employers supportive, the pressure to get the job done often means he takes fewer breaks. "You can't just say 'I can't provide you with a third of the menu today because it's just too hot and I have to turn the oven off.'" he says.

Though rising temperatures affect workers from a range of sectors, agriculture and construction workers are particularly vulnerable to injury. By combining projections from the group Climate Central with census data, Public Citizen concluded that, by 2050, more than one million agriculture and construction workers will experience 30 days or more of dangerous heat per year.

Tough physical exertion and time spent in the heat without anyone else to watch for symptoms worries occupational physician Ronda McCarthy, who treats workers from a variety of sectors. When employers voluntarily adopt many of the measures recommended by NIOSH, McCarthy says she sees a dramatic decrease in workers compensation costs. She emphasizes the importance, especially, of training and acclimatization programs.

"Acclimatized workers can work in pretty hot conditions. Not abnormal, not above and beyond, but they — once they adapt — I've been in glass plants where people are working in 120 degrees day in day out, and do fine." She thinks it would be simple and inexpensive to impose standards that require acclimatization programs and exposure limits with rest/work cycles.

Right now she advises employers and workers to use NIOSH's criteria for a recommended standard as well as materials that OSHA provides, such as its mobile heat safety tool app, which provides a visual indicator of the current heat index and heat risk levels. She also advises workers to monitor themselves, as their employers are not required to do so.

"It would be such a relief to have the backing of the law," she says, to encourage employers to implement controls that would require monitoring and training employees to handle the heat. "Heat stroke or heat exhaustion is a preventable illness. It is a medical emergency — the sooner you can address it, within two hours, decreases the morbidity and mortality significantly."

Since the early 1990s, heat-related illnesses have killed hundreds and seriously injured hundreds of thousands of workers, according to figures compiled by the federal government.

Raudel Felix García's brother Audon died of heat stroke after lifting grape boxes into the back of a truck in nearly 115 degree weather. Felix García feels that a new standard would make a difference in holding employers accountable for their workers' safety in hot conditions. At the time of his brother's stroke, neither Audon nor his coworker had gone through training or protocol for handling excessive heat or recognizing signs of heat illness.

Raudel says of his brothers death, "I was pretty upset about this happening because I knew the precautions that you need to take on a hot day especially when you're not ready." In his own business as a landscaper, he's been trained to prepare for excessive heat days. "I'm totally convinced that it was kind of negligence from the company," he says.

Currently, OSHA does not conduct inspections to monitor if companies are following guidelines for preventing heat-related illnesses. The agency relies on its General Duty Clause — used only where there is no standard that applies to the particular hazard --to address heat danger. This means citations having to do with heat-illness are generally only issued after a worker is killed or hospitalized.

It's a pretty high legal bar, says David Michaels, OSHA's former director. At the point of death or serious illness, it's too late. He endorses Public Citizen's current petition, stating that standards would be an effective means of changing employer behavior and preventing injury.

"This is really one of the most feasible standards that OSHA could ever promulgate," he says. "Because it's very simple, you don't need any additional equipment other than shade and water."

He says the reason previous petitions for a heat standard weren't granted was because OSHA staff were already working on other rules, such as those for silica, beryllium, and infectious diseases.

He says that the process to create a new standard would require a good deal of available staff and resources. But there are resources to work on this now, he adds. Michaels believes that a standard would help protect workers despite OSHA's lack of enforcement capacity. "Most employers want to follow the law," he says.

Though these programs and standards are not as comprehensive as NIOSH recommendations, advocates say they demonstrate the attainability of such preventative measures, especially with predictions of ever-rising temperatures.