Accessibility links
Understated And Over-Frank, 'French Exit' Is Just The Right Amount Of Funny Patrick DeWitt's new novel is a sparkling dark comedy about an Upper East Side society matron and her large adult son (and their cat) who take off for Paris to escape financial and social ruin. 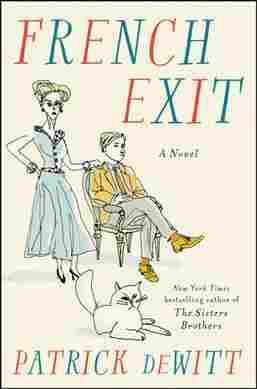 Patrick deWitt's novels don't so much skewer genres as turn them askew. His latest is the third of a trilogy of literary hijinks that began with The Sisters Brothers (2011), a gleefully gruesome, wonky western set during the Gold Rush. This was followed by Undermajordomo Minor (2015), a sort of fairytale adventure for adults. French Exit, aptly billed as a "tragedy of manners," is a mother-son caper, a sparkling dark comedy that channels both Noel Coward's wit and Wes Anderson's loopy sensibility.

DeWitt's tone is breezy, droll, and blithely transgressive. The novel's first line heralds its overarching theme: "All good things must end." The speaker is Frances Price, "a moneyed, striking woman of 65 years." We meet her bowing out of a tony Upper East Side party early, with a lie about a sick cat. Her dismayed hostess clings to her. "Her name doesn't matter," deWitt writes, succinctly capturing his condescending heroine's dismissive attitude. Frances' lumpy 32-year-old son, Malcolm, peels the "pliable" hostess away from his mother. When they're barely out of earshot, Frances pronounces, "Born to bore." Malcolm reveals a jade framed photograph he's stolen from the hostess' bedroom. These are people you may not want to invite to dinner, but they sure make for fun reading.

We soon learn they're no more happy-go-lucky than Truman Capote's Holly Golightly. Frances has been widowed for 20 years, since her universally disliked husband, Franklin — a vicious litigator who specialized in "defending only the indefensible: the tobacco and pharmaceutical industries, the apparatus of the war machine, gun lobbyists" — died of an explosive heart attack. Frances' reaction to his death was scandalous, earning her bad press and a lasting social stain. But she was left with a ton of money, though now it's almost all gone, thanks to what her financial advisor calls her "pathological" spending. He wonders, "was she perhaps attempting to distance herself from what could be considered dirty money?"

A Fable's Foibles: In Gilded Language, This Folk Tale Gets To The Point

Turns out, of course, that it's more complicated. Frances has a two-part plan to extricate herself from her predicament. It involves moving to Paris for a twist on the phrase "French exit" — which means leaving without an au revoir, not even her party farewell kiss-off. Malcolm, her loyal, pathologically passive sidekick, dutifully accompanies her, dimming the hopes of his beloved but frustrated fiancée, who fears she'll never be able to extricate him from his mother.

The Prices' borrowed apartment on the Île Saint-Louis soon fills with an eccentric assortment of oddballs, including a doctor named Touche, a shy private investigator, a psychic who can see death coming, and a dipsy, dotty, sycophantic widow named Mme. Reynaud who feeds them all fancy Julia Child soufflés and cocktails like the Corpse Reviver II (a heady concoction of gin, Lillet, Cointreau, absinthe, lemon, and star anise). The result is deWitt's zany version of a weekend house party drama, complete with parlor games like Dictionary (Malcolm defines "costalgia" as "a shared reminiscence.") and a talent show in which mother and son share traumatic stories from their miserable, neglected childhoods.

These are people you may not want to invite to dinner, but they sure make for fun reading.

DeWitt also throws elements of the supernatural into the mix, including Frances' runaway cat, Small Frank, whom she's convinced is a vessel for her nasty late husband's spirit. This stray feline, conjured by the psychic, admits to Frances that he was always angry, "But I loved being angry ... I loved getting away with everything." Frances replies, "Yes, but look at you now." Small Frank, a cold, starving cat on the streets of Paris, cuts the connection with an expletive.

The humor stems from a combination of understatement and over-frankness. The psychic admonishes Mme Reynaud, "Please don't cry. Your makeup's going to run — and there's so much of it." DeWitt describes the Prices' ocean crossing: "Days passed. Nothing happened." But then things do happen, including bad sex and a visit to the ship's surprisingly full morgue. Malcolm's standard response when faced with a sticky subject: "I'm comfortable not talking about it."

DeWitt ultimately works his spirited narrative around to some sober points about the lasting effects of insufficient love. But French Exit doesn't bear too much serious scrutiny. It works better on the comic level than the tragic.