Accessibility links
'Since U Been Gone': The Crossover Pop Needed, The Anthem Rock Deserved The Kelly Clarkson smash wasn't just a great pop song: In 2004 it was a cultural bellwether, a sign that the walls between mainstream and underground were starting to crack.

'Since U Been Gone': The Crossover Pop Needed, The Anthem Rock Deserved

'Since U Been Gone': The Crossover Pop Needed, The Anthem Rock Deserved 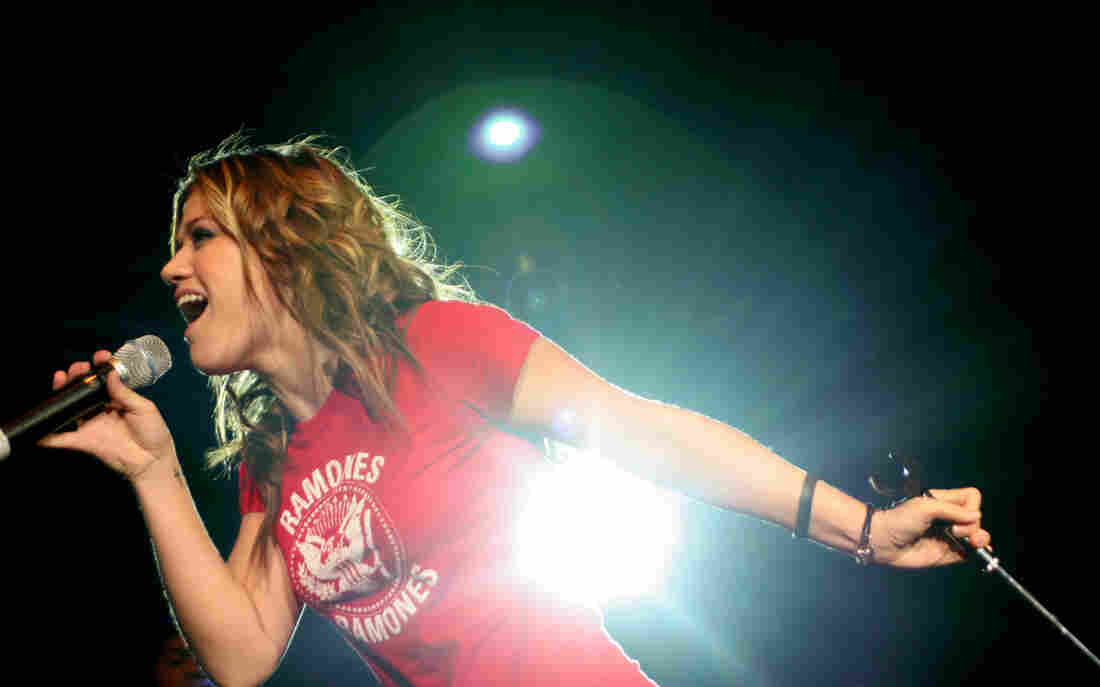 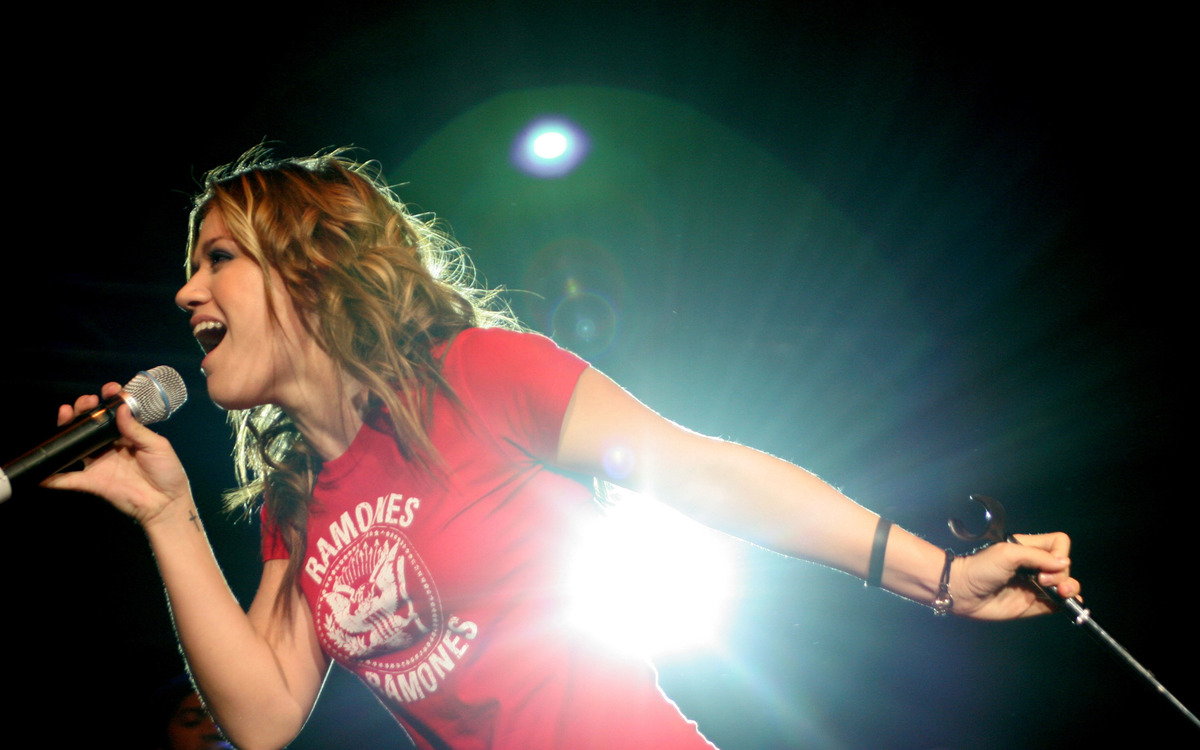 Kelly Clarkson performs during the KISS 108 FM Jingle Ball in Lowell, Mass. in 2004 — the year her second album, Breakaway, cemented her status as a pop superstar.

A slow-burning indictment turned celebratory bounce. A 2000s radio hit that owes as much to the hooky riffing of '80s smashes like Laura Branigan's "Gloria" and The Go-Go's' "Our Lips Are Sealed" as it does to buzz-bin rock from its own era. Kelly Clarkson's joyous, singalong-ready vocal performance, that stripped-down bass line and triumphant guitar break, combined into a track that can please multiple, disparate audiences. "Since U Been Gone" is one of the best artifacts of the early 21st century, and not even those who consider themselves hip are impervious to its chorus.

"Since" came out of co-writers Max Martin and Lukasz "Dr. Luke" Gottwald listening to "alternative and indie music" while brainstorming, Gottwald told Billboard in 2010, five years after the song peaked at No. 2 on the Billboard Hot 100. What Gottwald called "some song — I don't remember what it was" came on, and his praise for it was met with disgust in the room. "Max was like, 'If they would just write a damn pop chorus on it!'" Gottwald recalled. "It was driving him nuts, because that indie song was sort of on six, going to seven, going to eight, the chorus comes ... and it goes back down to five. It drove him crazy."

Martin and Gottwald added "a big chorus" to their inspiration — clearly "Maps," the Yeah Yeah Yeahs' 2003 inverted power ballad, which grazed the bottom of the Hot 100 and popped up on MTV's playlist in 2004. They laid down the demo, which made its way to Clarkson through her former label boss (and eventual antagonist) Clive Davis. But Clarkson, whose 2003 single "Miss Independent" used flinty riffs to energize its bubblefunk, didn't think the song had enough rock.

"I hated [the original demo]," Clarkson told Entertainment Weekly in 2005. "It sounded very generic. It didn't have hardly any git-tars [sic] on it. I needed more drums. I needed it to be harder." She got her wish in the version that made it to 2004's Breakaway, its determined rhythm presaging the resolution of that "Maps" riff's tension. (The team would collaborate again on "My Life Would Suck Without You," the punchy lead single from 2009's All I Ever Wanted, although Clarkson was so unthrilled to be working with Dr. Luke — perhaps better known of late for a long and nasty legal battle with Kesha, whose sexual assault accusations he denies — she declined a co-writing credit. )

While the structure of "Since" is key to its success, it probably wouldn't have been the super-crossover it was had it not been sung by Clarkson. She was the first winner of Fox's American Idol, and in many ways still seems like the ideal realization of its stardom-via-democracy concept: She's charming and funny and aware, and she still, some 16 years after her coronation, has one of the most purely powerful voices in pop. Some singers wait a lifetime to hit a high note like the one she reaches right before the "Maps"-nicked breakdown — a high G that's two octaves from the vocal melody's lowest point — but for Clarkson, it's just another day at the office.

The anything-goes aesthetics of shuffle play and mixtapes were energizing artists and listeners, allowing genre boundaries to fall away and gaps in taste to narrow.

When "Since U Been Gone" arrived as a single in 2005, some still drew a bright line between pop and "indie," but lots of others were starting to waver. "All these crowds that were rock people or indie people became indie-dance people," club doorman Thomas Onorato told author Lizzy Goodman in her 2017 history of New York's turn-of-the-millennium rock scene, Meet Me in the Bathroom. Onorato was referring to Madonna's October 2005 appearance at the sweatily hip downtown party MisShapes, but it applies to other early-'00s phenomena as well.

All through music culture, the anything-goes aesthetics of shuffle play and mixtapes were energizing artists and listeners, allowing genre boundaries to fall away and gaps in taste to narrow. The nascent mashup craze of the early 2000s used pop to wink at purists, with artists like DJ French Bloke and the Freelance Hellraiser bringing together unlikely couples like Destiny's Child and the Dead Kennedys (years before higher-profile experiments by Danger Mouse and Girl Talk blew the concept open in the States). "Selling out," once the kiss of death, lost even more of the stigma it had already begun shedding in the post-"Pink Moon" '90s, with the sardonic production duo the DFA using its brief, fruitless session with pop doyenne Britney Spears as a press punchline and Apple using rock-revivalist bands like Jet and The Vines in their early run of iPod ads. And people with their finger on the mainstream pulse — like Martin and Gottwald, not to mention A&R reps from major labels — were paying attention to those rock acts who had avoided post-grunge's mire and instead taken cues from '80s new wave and the feedback-heavy noise jams of late-night loft parties.

The Internet helped, too. MP3s from chart-toppers could sit side-by-side with new bands' first demos in blog readers' RSS feeds, a context collapse that turned the idea of the "guilty pleasure" into a straight-up joy. Parties like MisShapes, where cities' "it" denizens would hobnob, created "everybody on the floor" moments when a song like "Since U Been Gone" would drop — and scene photographers turned attendees into microcelebrities, a shot at notoriety that made pop stardom seem like less of a dirty notion. Millennial revelers even had their own Statler and Waldorf-like counterpoint in the Gawker series "Blue States Lose," a ruthless hipster rotisserie that allowed them to feel fame's sting, too. The end result of all this mingling felt in some ways like a collapsing of the Walk of Fame into the underground, with high-end digital cameras poised and ready to chronicle the resulting chaos.

Not everyone was happy. In 2006, Yeah Yeah Yeahs singer Karen O said that the experience of hearing "Since U Been Gone" for the first time "was like getting bitten by a poisonous varmint." Rolling Stone writer Rob Sheffield appealed, citing Clarkson's "mall cred," and O relented, saying that Clarkson was a better biter than Ashlee Simpson might have been. The full embrace of pop was, and is still, a slow process.

But a decade and a half after it was released, Kelly Clarkson's post-breakup whoop of relief still lands like the rain that drenched her when she performed it at the Video Music Awards. It's a giddy pop song with rock's smolder, a defiant rock anthem with pop's economy. Listen to it in 2018 and you can almost hear Clarkson declaring her independence from tired divisions between pop and rock, indie and major, gatekeeper and enthusiast.