Accessibility links
Thousands Of Southwest Washington Teachers Strike A regionwide teacher strike over salary increases is disrupting the start of school for the more than 78,000 students in the area. 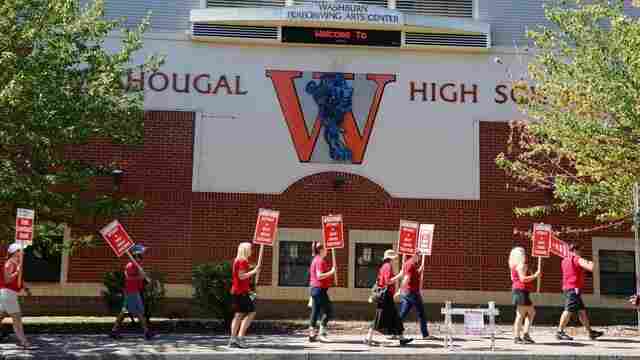 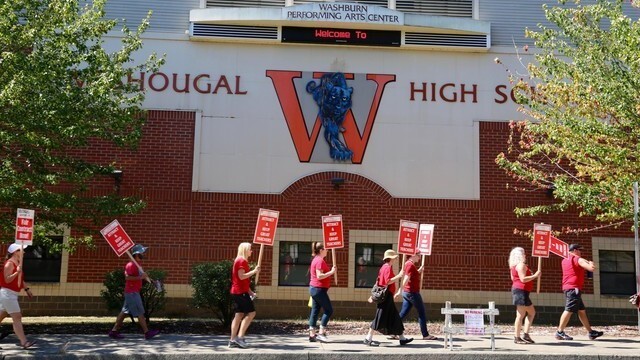 All summer, teachers and school administrators in southwest Washington state have been in contract negotiations to avoid widespread strikes.

But now those strikes are happening. A regionwide teacher strike is disrupting the start of school for the more than 78,000 students in the area, and it's unclear how long it could last.

Nearly every school district in Clark County has delayed the start of school and is on strike, with the exception of Woodland Public Schools, where teachers bargained a 22.82 percent increase in base salary.

Lawmakers sent funding to districts, including an additional $1 billion passed this session, to address the McCleary decision — a state Supreme Court case that determined Washington was failing to fully fund basic education. The new funding has meant that all 295 school districts in Washington state are renegotiating their teacher contracts. Some unions have been very successful getting their teachers raises up to a third of their salary. But the districts decide how to allocate the money and that makes for tough negotiations. Most of those districts are still trying to reach a deal.

This week, teachers from Evergreen, Vancouver, Ridgefield, Hockinson, Washougal and Battle Ground headed to the picket line. In Cowlitz County, Longview's union voted to strike immediately and has been picketing since last week.

We've pushed the edge of the financial limit.

Most recently teachers in the state's largest school district, Seattle, voted on Tuesday to strike if a deal isn't reached by next week.

Joanie Hahn, a math teacher who has worked at Hudson's Bay High School in Vancouver, Wash., for 10 years, is one of thousands of teachers on strike in the region.

"We've been waiting a very long time for this and I just want to make sure that our voices are heard," Hahn said. She feels that the school districts can now afford to pay teachers the double-digit increases they are asking for.

"We don't have a choice"

School was canceled in the Evergreen district for Wednesday and Thursday. Union members and the administration are continuing negotiations with the help of a state-appointed mediator.

As those negotiations continued, teachers started to march on the picket line Tuesday.

This is not the way that any teacher I know wants to spend the first day of school.

"This is not the way that any teacher I know wants to spend the first day of school," said Katie Cornell, who teaches special education at Cascade Middle School. "Unfortunately, this is sort of what we've been forced to do."

According to the district's current proposal, teachers would see an average 8.33 percent increase in compensation next year. The starting salary for a new teacher would be $50,687 and the most experienced teachers would receive $96,045, making the average Evergreen school teacher salary about $79,000.

Evergreen schoolteachers are in the final year of a three-year contract that was previously negotiated in 2016. With more than 26,000 students, Evergreen Public Schools is the largest district in Clark County and the sixth-largest in the state.

Bargaining teams with Vancouver Public Schools and the Vancouver Education Association met at length in the days leading up to the school year, but it wasn't enough to reach a deal. Vancouver teachers said they would continue to strike Thursday.

School Board President Rosemary Fryer said the district and teachers have made "positive progress" after long hours of negotiations since Sunday — but a deal hasn't been made yet.

After a heated board meeting on Tuesday, the board passed what it called a "strike contingency plan," six resolutions that allow the district to close school facilities, suspend compensation and health benefits and take legal action to terminate a strike.

Superintendent Steve Webb told the audience that the district did not plan to file a court injunction immediately and will only suspend health premium payments for October if a strike continues past Sept. 17, which by that point would be considered a gift of public funds, he said.

"Friends, we don't have a choice in this matter," Webb added.

The two sides will continue to bargain, even as kids await the start of the school year.

You can read more on the negotiations within each district here, via Oregon Public Broadcasting.