Accessibility links
'Enemy Of The People': Man Echoing Trump's Words Charged With Threatening Newspaper In an Aug. 16 editorial, The Boston Globe said the president's "assault on the free press ... has dangerous consequences." Later that day a man allegedly threatened to shoot Globe workers in the head. 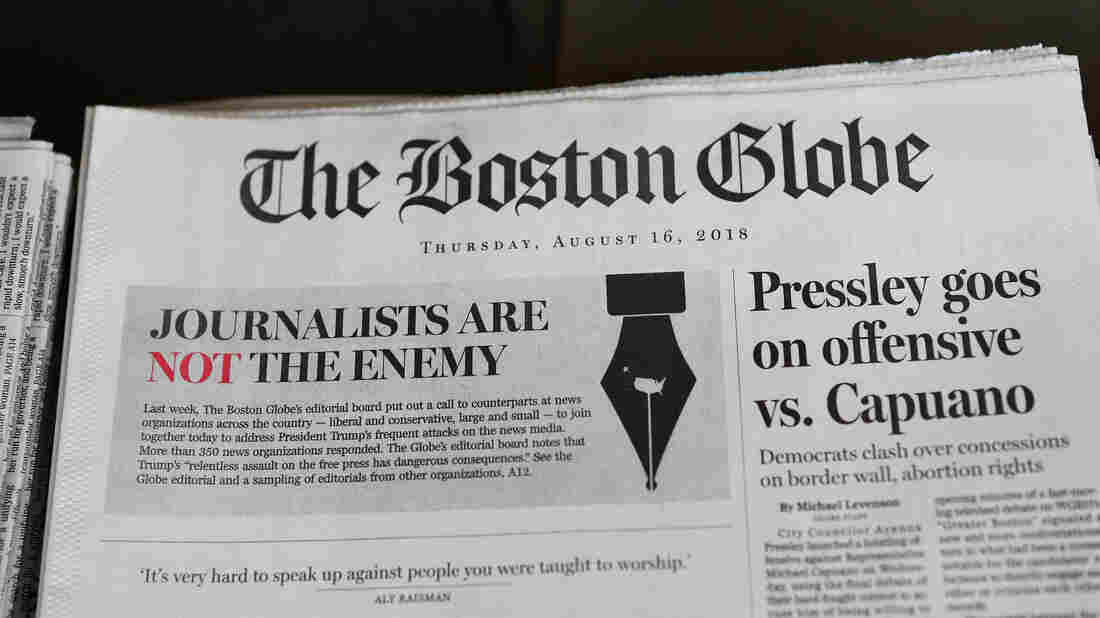 The front page of the Aug. 16 edition of The Boston Globe. On Thursday, a California man was charged with threatening the newspaper in retaliation for its national editorial campaign criticizing President Trump's assault on the free press. Tim Bradbury/Getty Images hide caption 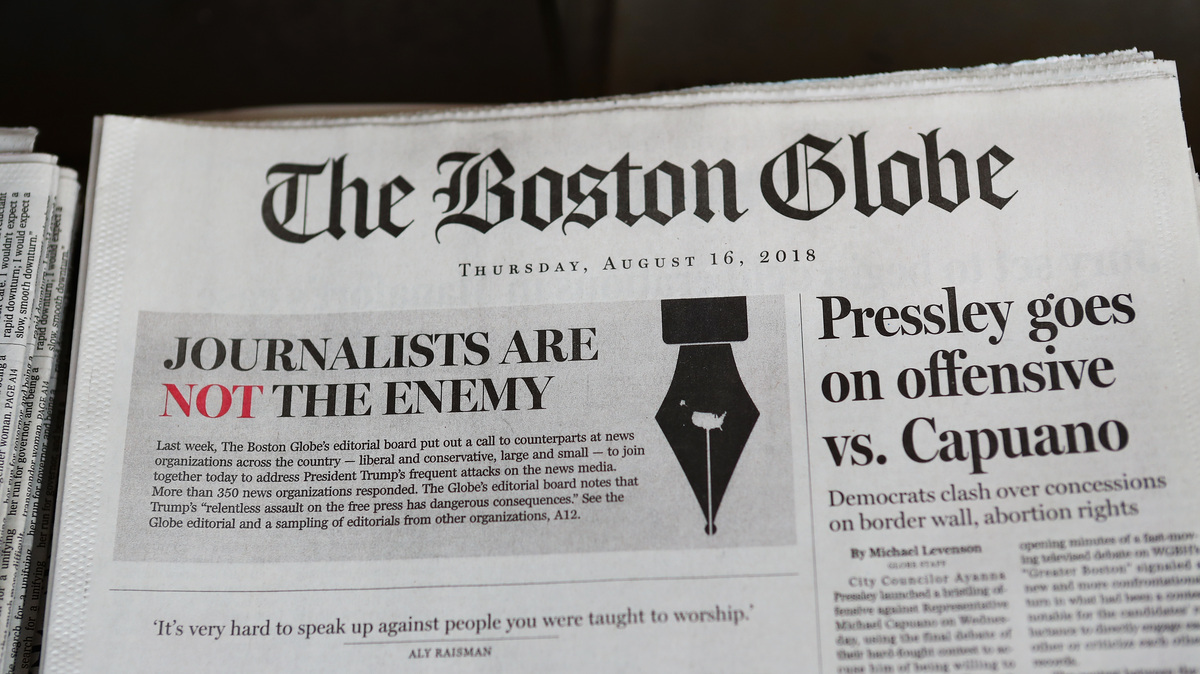 The front page of the Aug. 16 edition of The Boston Globe. On Thursday, a California man was charged with threatening the newspaper in retaliation for its national editorial campaign criticizing President Trump's assault on the free press.

A California man was arrested Thursday and charged with threatening violence against Boston Globe journalists in retaliation for the newspaper's coordination earlier this month of some 300 nationwide editorials denouncing President Trump's attacks on the media, according to federal prosecutors.

Robert Chain, 68, of Encino, Calif., faces up to five years in prison and a $250,000 fine. He was charged with one count of making threatening communications in interstate commerce and will be transferred to Boston at a later date, according to the U.S. Attorney's Office, District of Massachusetts.

On Aug. 16, the Globe published its own editorial saying a "central pillar of President Trump's politics is a sustained assault on the free press ... which has dangerous consequences."

Later that day, the Justice Department says, Chain called the Globe newsroom and threatened to shoot its employees in the head "later today, at 4 o'clock."

As a result, Boston police officers were posted outside the Globe's offices to protect workers.

In all, Chain is alleged to have made more than a dozen "threatening calls" to the newspaper beginning Aug. 10 — the day the Globe announced the national newspaper campaign — until Aug. 22.

In addition to allegedly threatening to kill Globe workers, Chain is also accused of calling the newspaper "the enemy of the people," a phrase favored by the president to describe the media, as showcased in a tweet as recently as Thursday.

"I just cannot state strongly enough how totally dishonest much of the Media is," Trump tweeted. "Enemy of the People!"

I just cannot state strongly enough how totally dishonest much of the Media is. Truth doesn’t matter to them, they only have their hatred & agenda. This includes fake books, which come out about me all the time, always anonymous sources, and are pure fiction. Enemy of the People!

It followed earlier tweets posted by Trump critical of CNN's reporting that he knew his campaign officials were planning to meet with Russians in 2016 with the expectation of receiving damaging reports about Hillary Clinton. CNN stands by its reporting.

The Globe reports that the affidavit quotes Chain as saying in one call to its newsroom on Aug. 22 that "you are the enemy of the people, and I want you to go [expletive] yourself. As long as you keep attacking the President, the duly elected President of the United States, in the continuation of your treasonous and seditious acts, I will continue to threat[en], harass, and annoy the Boston Globe, owned by the New York Times, the other fake news."

As the Globe points out, it was sold five years ago and is no longer owned by the Times.

Chain's earlier calls appeared as "blocked" on the newspaper's caller ID, but investigators were able to trace them to his home landline based on Verizon records, according to the affidavit. He also allegedly made later calls from his wife's cellphone, a line that was not blocked.

Chain is not accused of having acted beyond the threats, but the calls alone were enough for federal officials to act, said Harold H. Shaw, special agent in charge of the FBI, Boston Division.

"Today's arrest of Robert Chain should serve a warning to others that making threats is not a prank — it's a federal crime," Shaw said.

Prosecuting U.S. Attorney Andrew Lelling said, "In a time of increasing political polarization, and amid the increasing incidence of mass shootings, members of the public must police their own political rhetoric."

Lelling was careful not to name Trump in his statement, instead saying, "Anyone — regardless of political affiliation — who puts others in fear for their lives will be prosecuted by this office."

But in May, a report commissioned by organizations devoted to press freedom found that the rhetoric used by Trump and his administration "to disparage and discredit the media" has led to journalists' being subjected "to increasing abuse, harassment, and threats."

Earlier this month, an Ipsos poll found that nearly half of Republicans now believe "the news media is the enemy of the American people."

Jane Bowman, a spokeswoman for the Globe, said in a statement, "While it was unsettling for many of our staffers to be threatened in such a way, nobody — really, nobody — let it get in the way of the important work of this institution."