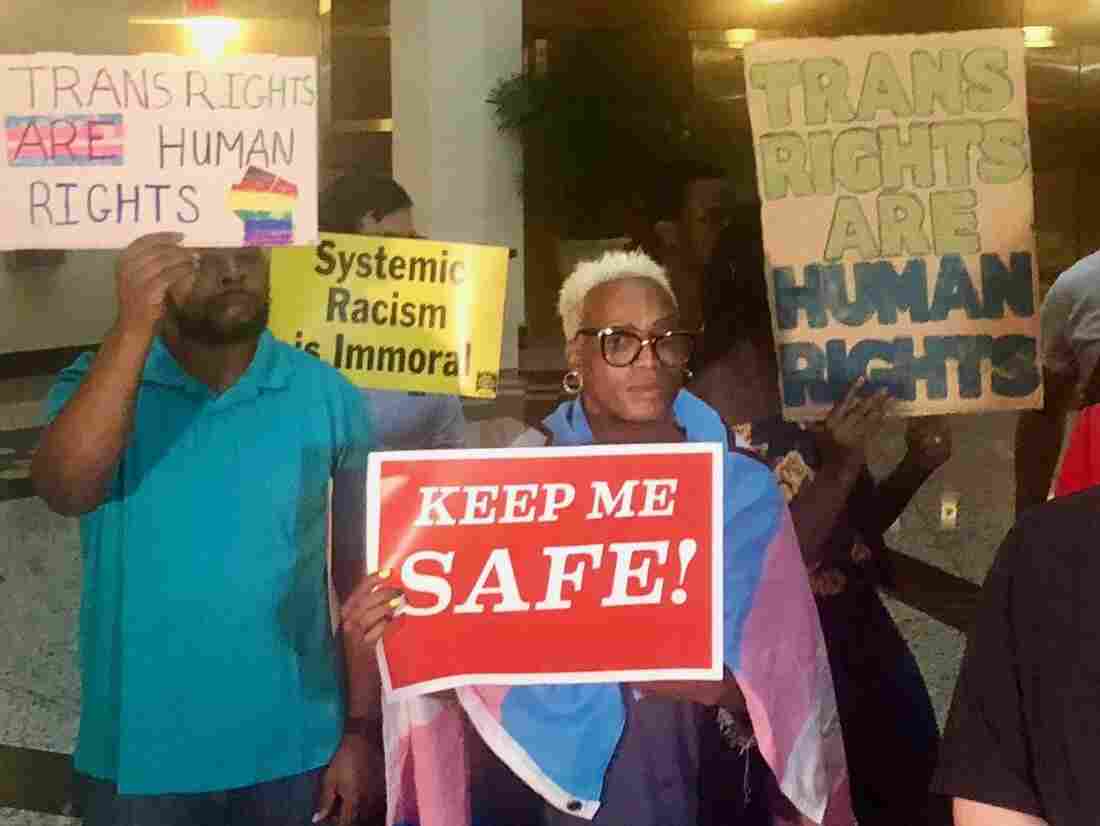 A group of advocates upset with the Jacksonville Sheriff's Office's handling of transgender shootings spoke out at Jacksonville City Hall in June. Lindsey Kilbride/WJCT hide caption 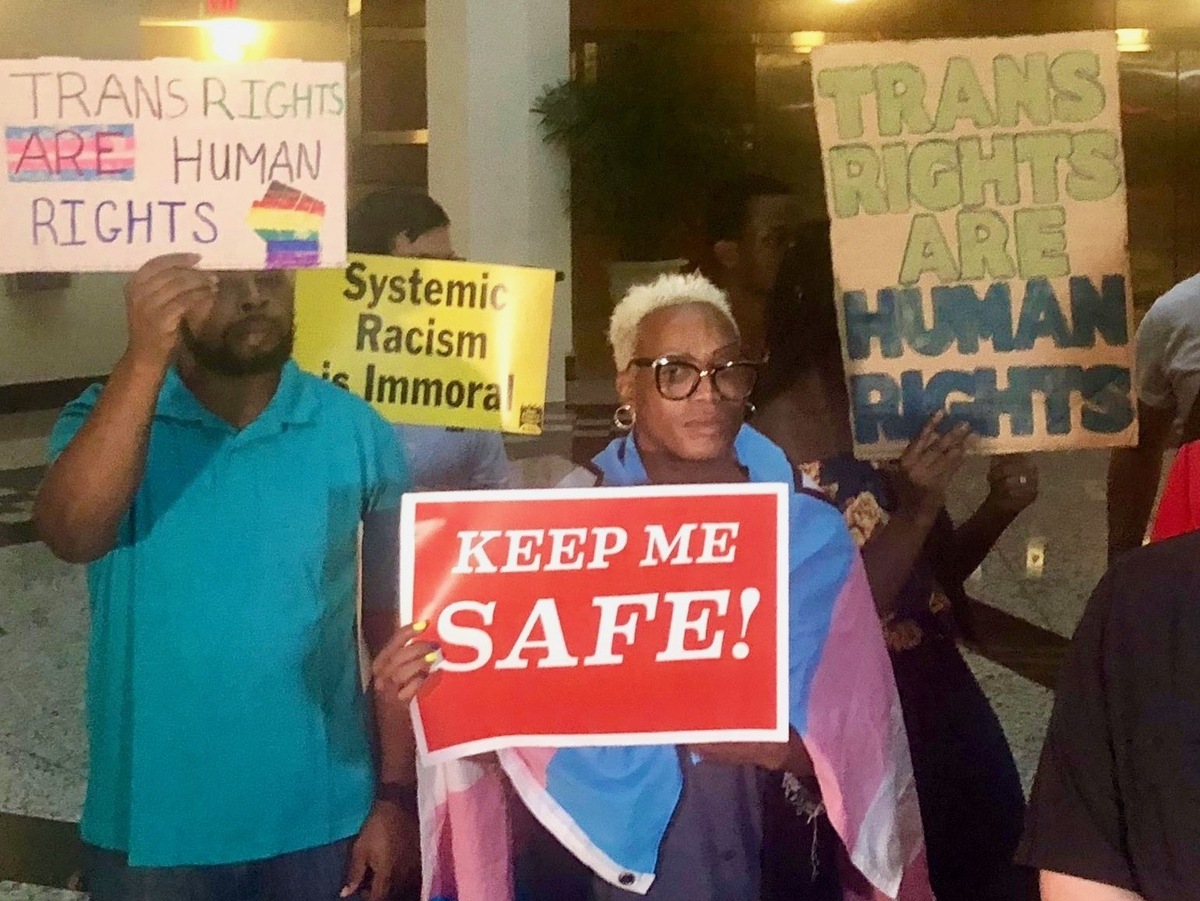 A group of advocates upset with the Jacksonville Sheriff's Office's handling of transgender shootings spoke out at Jacksonville City Hall in June.

Four transgender women have been shot this year in Jacksonville, Fla., three of them fatally. The shootings have spurred community outrage over police handling of the cases and a call for a better relationship between the sheriff's department and the local LGBT community.

Antash'a Devine English was found between two abandoned homes with a gunshot wound in the early morning hours of June 1. She later died in the hospital. Her close friend Chloie Kensington is still mourning her death.

"It was really deep, so I had to pray for days for the lord to take that pain away," Kensington said. "I hadn't felt that type of hurt in a long time."

English was the second transgender woman of color to be shot in Jacksonville this year; two more would soon follow. Kensington considered English to be her godsister. She remembers her as someone who had her back no matter what.

"Especially during that time in my life when I didn't have many people to identify [with]," Kensington said.

The two identified in part because they're both transgender women of color.

The Human Rights Campaign has tracked 16 homicides of transgender people this year, three of them in Jacksonville alone. Last year it tracked 28, the most it's ever recorded in a year, and found "fatal violence disproportionately affects transgender women of color."

Each of the shootings in Jacksonville were followed by vigils and protests by activist groups, including Equality Florida, a civil rights organization supporting the LGBTQ community. In front of City Hall earlier this summer, Equality Florida's Director of Transgender Equality, Gina Duncan, said the Jacksonville Sheriff's Office, or JSO, is impeding its own investigations by not using the victim's preferred names and pronouns, the way their friends knew them.

"Besides misgendering these transgender women of color, JSO is also not interacting with the community," she said. 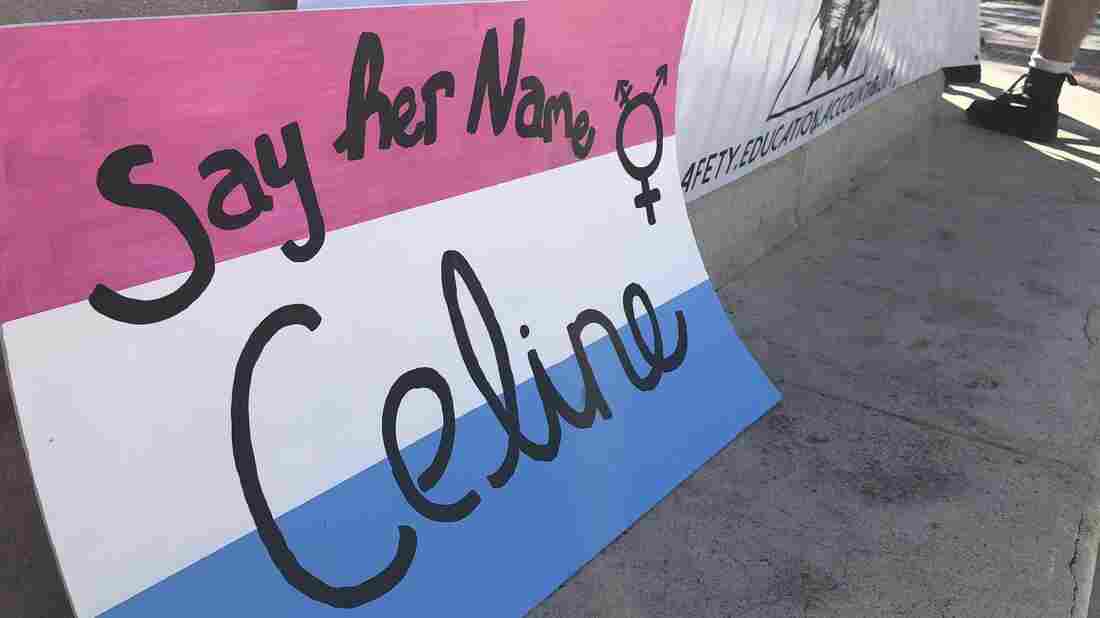 Advocates call for police to call transgender victim Celine Walker by the name she used in life at a February vigil. Lindsey Kilbride/WJCT hide caption 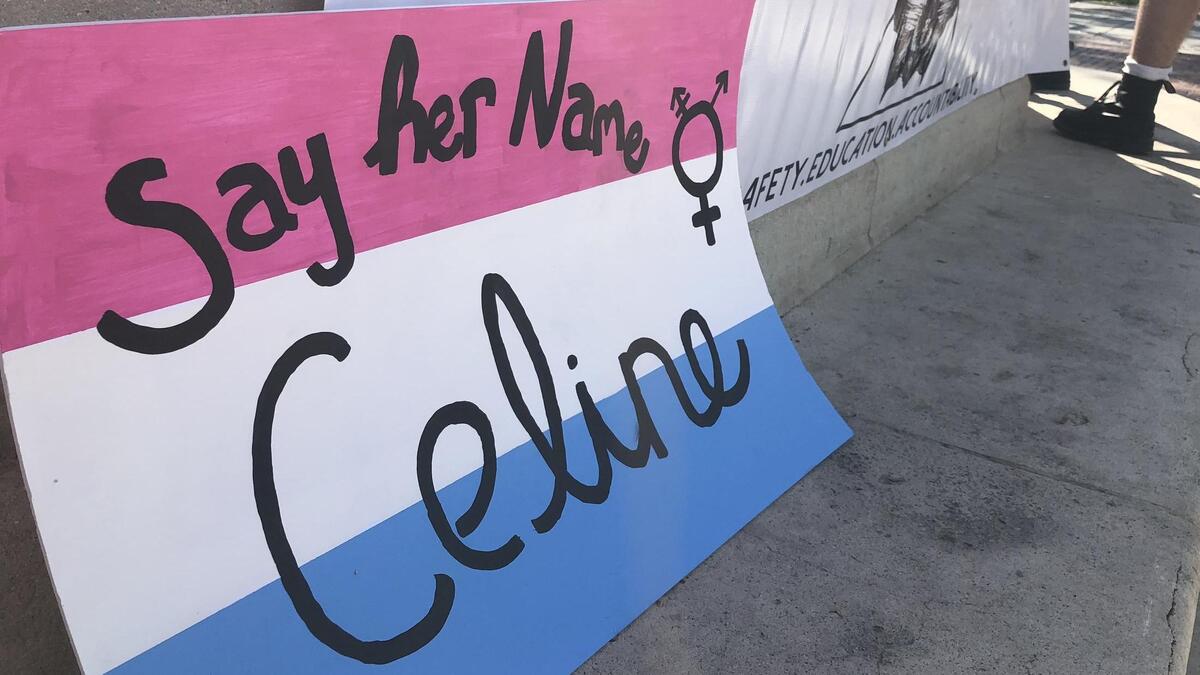 Advocates call for police to call transgender victim Celine Walker by the name she used in life at a February vigil.

Yet, none of the victims had legally changed their names to ones they actually used in life.

"As a government agency, we can't change official, legal records," explained JSO Spokeswoman Melissa Bujeda. "If anyone wishes to go by a different name, they need to go through the proper channels to change their name legally."

He believes their deaths have had more to do with sex work, than their identities as transgender women.

After Families Disown Them, 2 Transgender Vets Share A Bond

After Families Disown Them, 2 Transgender Vets Share A Bond

Organizations like the Human Rights Campaign and the National Center for Transgender Equality argue that housing and job discrimination can drive transgender people to sex work for survival.

One of the complications facing the sheriff's department in these cases, Sheriff Williams said, is that it is difficult to know someone's gender identity if they're found deceased. But Mateo De La Torre with the National Center for Transgender Equality said it doesn't have to be that difficult.

"That is why precisely you build the relationship with your community, your local transgender community," he said. "They will have the answers for you."

That is why precisely you build the relationship with your community, your local transgender community. They will have the answers for you.

De La Torre is working on a project grading police department's trans-inclusive policies, which Jacksonville doesn't have. "There is a reason why, according to the U.S. Trans Survey, 57 percent of transgender people do not trust to call the police when they're in need," he said.

According to the same 2015 survey, carried out by the National Center for Transgender Equality, 65 percent of Florida's respondents say police have mistreated them.

De La Torre said proof of improved relationships between police and transgender communities is mostly anecdotal, but one of the most effective ways to repair that relationship is continual police training.

Four years ago Seattle's Police Department began its own training after appointing Jim Ritter as a full-time LGBTQ liaison officer.

"You wanted to make sure the officers really understood what transgender folks go through in their life," Ritter said. He enlisted several transgender people to help the Seattle Police Department and they partnered to produce an 18-minute training video. Officers in Seattle now have to watch the video and take a quiz on it.

"It basically lets our officers know about what it's like, as much as they can, to be transgender and to be empathetic and compassionate when dealing with the transgender community," Ritter said.

It is now established policy in Seattle for officers to use people's preferred pronouns and names, even including them on official documents.

After English was killed, Kensington joined in with the advocacy. "With losing her and it hitting me in such a profound way I wanted to be a part of the conversation with justice," Kensington said.

She started a group — Stiletto Sisters Society — to provide others like her the information and resources about legal name changes and safe work environments. But she also joined a handful of other advocates in a small meeting with Sheriff Williams, which led to a joint JSO-LGBT community forum earlier this summer.

During that meeting, Williams announced he'd started assembling a LGBT liaison team. "It shouldn't take a crisis like this, but because of this crisis I think that the team is an absolute necessity," he said from the stage.

He believes the team will strengthen communication between the two groups.

In the last couple months his office has begun referring to the victims as transgender and by several names — their legal ones and names they actually used, which is new.

"There's an investigative benefit to identifying someone by the way they were identified in the community," Williams said.

The new liaison team has already had its first meeting, hosted by Kensington. The team said new training is in the pipeline. It's started reviewing material from an array of agencies, including Seattle's Police Department.