Accessibility links
Not My Job: We Quiz Glenn Close On Rabbits The great actress will always be remembered for a certain scene involving a very dead boiled bunny. So we asked her to answer three questions about live rabbits. 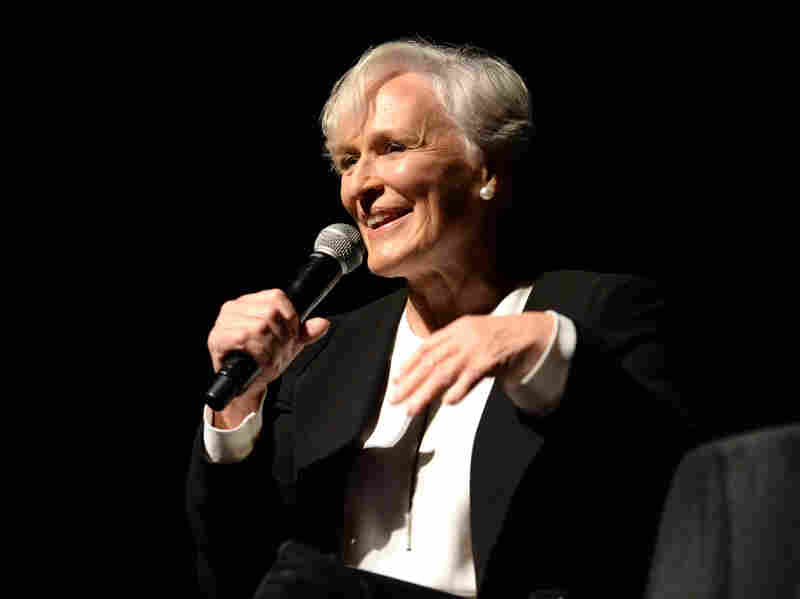 Enlarge this image
Andrew Toth/Getty Images for The New Yorker 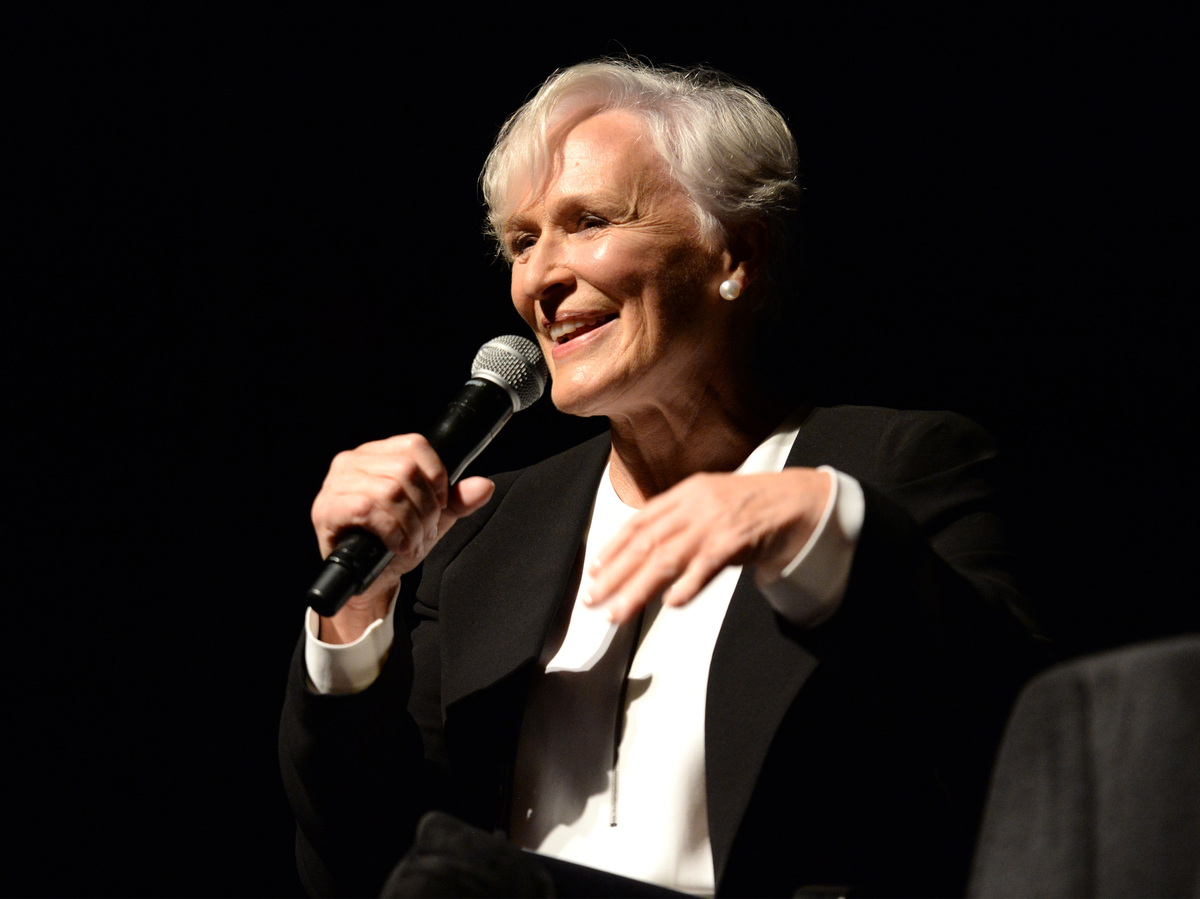 The great actor Glenn Close stars in a new movie called The Wife — she's the wife, and attracting Oscar buzz for it. But she'll forever be remembered for her role in Fatal Attraction, and in particular a certain scene which involves a certain boiled bunny.

Given her association with dead rabbits, we asked her to answer three questions about live rabbits.

Click the audio link above to see how she does.

Two Very Different Working Women At The Movies, 25 Years Ago This Week

And now the game where we give somebody a chance to win a prize that they never particularly wanted - nt's called Not My Job. Forty years ago, Milwaukee thrilled to a stunning performance in a Milwaukee Rep production of "King Lear." She now stars in a new film called "The Wife" that people say may finally get her the Oscar she so deeply deserves. She joins us now.

SAGAL: I guess we have to start with this. We've been talking about your star turn here in Milwaukee in the mid-'70s. Do you remember it?

SAGAL: Yeah. So you were in "King Lear."

SAGAL: ...This was one of your, I'd say, early theater gigs.

CLOSE: It was, yes. I had started in New York. And I got a out-of-town job doing Cordelia in "King Lear" at the Milwaukee Rep.

SAGAL: Oh, you were Cordelia?

SAGAL: So we were looking into the stuff you were doing before that, and we were kind of amazed. For example, we didn't know you spent a good part of your growing-up in Africa.

CLOSE: Yes, yes. My father was in the former Belgian Congo for 16 years being a doctor.

SAGAL: ...In the Belgian Congo. So - and was it true that he occasionally worked with the dictator of the time, Mobutu Sese Seko? Is that right?

CLOSE: Yeah. He was his doctor.

CLOSE: Yeah. So he knew him when he was a colonel.

SAGAL: Wow. So did you get to hang out with the dictator of the Congo?

CLOSE: Actually, I was involved in a singing group after I graduated from high school, so I was kind of traveling around myself.

FELBER: Glenn, you're in a safe place. If it was an a cappella group, you can tell us.

SAGAL: No. I actually wanted to ask you about this.

POUNDSTONE: I love a capella.

SAGAL: The group was the famous Up with People. Is that right?

POUNDSTONE: I loved Up with People. Do you still have a V-neck sweater? Just say it.

CLOSE: No, I have to say I got rid of all my V-neck sweaters.

SAGAL: So I want to put this delicately. And you can say as much as you want. But my understanding is is that, in those early days of Up With People, it was kind of weird.

CLOSE: It was. I don't know how much you want to talk about it (laughter).

SAGAL: I would say endlessly. So...

SAGAL: For people who might be younger, Up with People was this wonderfully cheerful group of mostly white people singing very cheerful songs. And we saw them a lot at Super Bowl halftime shows in the '80s. But...

SAGAL: And so you were a part of that but earlier. Right?

CLOSE: I was. I was part of the first group.

SAGAL: And so what was weird about it?

CLOSE: It was very controlled. It was the offshoot of what basically was a cult group.

SAGAL: And so what was the purpose of a cult? Did you have, like, a messiah figure in the middle of it?

CLOSE: Oh, any cult is to make the world better but their way.

SAGAL: And what was their solution, V-neck sweaters and cheerful white people? What was it?

FELBER: In a word.

CLOSE: I - you know, I mean, we can laugh about it. But it was incredibly traumatic. And I...

SAGAL: ...That it was before college.

SAGAL: I want to cover this. It turns out that you, I believe, are tied with two other actresses from many, many years ago for the most Oscar nominations without winning one for best actress. And people...

SAGAL: Well, I wanted to ask you about this.

POUNDSTONE: But you know what? Glenn, if they throw in an additional category, the most Oscar nominations and leaving a cult, then you win.

SAGAL: But a number of people have said that in the new film coming out now, "The Wife," in which you star as the wife, that this might be it. This might be the movie that finally gets Glenn Close her Oscar. People really care about that, it seems.

FELBER: Or sole possession of the record.

SAGAL: It's true, one way or another.

FELBER: You win either way.

SAGAL: I wanted to ask if - what you think about that.

CLOSE: Well, it might be nice to keep the record going.

POUNDSTONE: Right. That's how I feel about my losses on WAIT WAIT.

SAGAL: I do have to ask you about what I think is your most famous role out of the many, many, many films you've done, which is of course "Fatal Attraction." And that was the first time that you had played a villain - right? - because the roles that you were in before were very heroic. You were, like, the force of good in "The Natural." And so was it - I imagine it must have been fun to play a psychopath.

CLOSE: Oh, I - absolutely. I was not playing a psychopath.

CLOSE: But I know where you live.

FELBER: That was chilling.

SAGAL: Hang on. I have to call home. Hide the bunny.

SAGAL: Actually, one other - I was reading something that you said that since making that film - it was some years ago. But you say that people have come up to you and talked about that film and said to you, quote, "you saved my marriage." And I...

SAGAL: Were people saying you...

CLOSE: Well, because - it's women who say that, by the way.

SAGAL: Yeah. And what do they mean by that?

CLOSE: Well, they mean - it said I scared the [expletive] out of their husbands.

KURTIS: It's so true.

SAGAL: Well, Glenn Close, we are delighted and honored to talk to you. But we have in fact asked you here to play a game we're calling...

SAGAL: I say this with some sadness. But for all your remarkable achievements in theater and film, you will always be associated with a particular rabbit, who sadly did not end up well but simply and deliciously prepared.

SAGAL: We thought we'd ask you three questions about live rabbits. Answer two of them correctly; you'll win our prize for one of our listeners, the voice of their choice from our show on their voicemail. Bill, who is Glenn Close playing for?

SAGAL: So here's your first question about live, healthy, happy rabbits. One of the greatest days in rabbit history was when a group of rabbits accomplished what feat - A, they stole the world's largest carrot from a Guinness World Records display...

SAGAL: ...B, they defeated General Napoleon Bonaparte in a pitched battle; or C, represented by a human lawyer, they successfully sued Bugs Bunny for copyright infringement?

CLOSE: Oh, my God. One of those is true?

SAGAL: We're talking - I'm talking about rabbits with Glenn Close. I would not lie.

CLOSE: I'd do the third one.

SAGAL: You'd do the third one, that the rabbits sued Bugs Bunny for copyright infringement?

SAGAL: No. Actually, it's not. It was they defeated Napoleon Bonaparte.

CLOSE: How did they defeat Napoleon?

SAGAL: Napoleon decided to throw a party for his generals and aides, and it was going to be a rabbit-hunting party. And he took them out in a field, and he gave everybody guns. This was fun, I guess, in the early 18th century. And they released the rabbits. But instead of running and hiding and making themselves interesting to hunt, the rabbits all turned and attacked Napoleon...

SAGAL: ...And his aides, driving them back into their coach. And they ran away terrified.

FELBER: There is no way that's true.

POUNDSTONE: No. You know why it's true? The victors write the history.

SAGAL: All right, you still have two more chances, so I'm not particularly worried. Rabbits have played their role in American history as well, as when which of these happened - A, a crazed rabbit attacked then-President Jimmy Carter; B, Senator John Mitchell resigned after being photographed in his special sexy rabbit costume...

SAGAL: ...Or C, when drunk late at night, the Nixon tapes caught that president talking to his imaginary best friend, a bunny named Max?

CLOSE: I go with first one.

SAGAL: You're to go with the first one? You are right.

SAGAL: Those of us who were alive back then might remember it. The famous incident happened when Carter was fishing in a pond back at home in Georgia. And this rabbit, he says, got in the water and swam straight towards him with murder in its eye.

SAGAL: And he actually fended it off with a oar.

SAGAL: So all right, this is your last question. If you get this right, you win for our listener. A rabbit, of course, is playing a role in today's politics, as well, in what way - A, Ivanka Trump has been accused of selling non-humanely raised rabbit for underwear; B, among the charges against Congressman Duncan Hunter of California, he used campaign funds to buy a plane seat for a rabbit; or C, Education Secretary Betsy DeVos named her daughter's pet rabbit undersecretary for administration.

CLOSE: So I know that it's the second one.

SAGAL: And you are right.

SAGAL: Among the charges in Mr. Hunter's indictment, he spent $600 of campaign funds to fly his family's pet rabbit. Mr. Hunter says it was a, quote, "oversight" - happens to anybody.

SAGAL: Bill, how did Glenn Close do on our quiz?

KURTIS: She got two out of three. And that's a win for us, Glenn.

SAGAL: Glenn Close is an award-winning actress. Star of the new movie "The Wife" in theaters now - Glenn Close, thank you so much for talking to us. What a pleasure. Thank you.

(SOUNDBITE OF SONG, "UP WITH PEOPLE!")

SAGAL: In just a minute, Bill will go skinny dipping in the Listener Limerick Challenge. Call 1-888-WAITWAIT to join us on the air. We'll be back in a minute with more of WAIT WAIT... DON'T TELL ME from NPR.