Accessibility links
The Wait To Become A U.S. Citizen Lengthens Immigrant advocates claim the Trump administration is building a "second wall" to keep immigrants out of this country. That wall is the lengthy and time-consuming process to become a U.S. citizen. 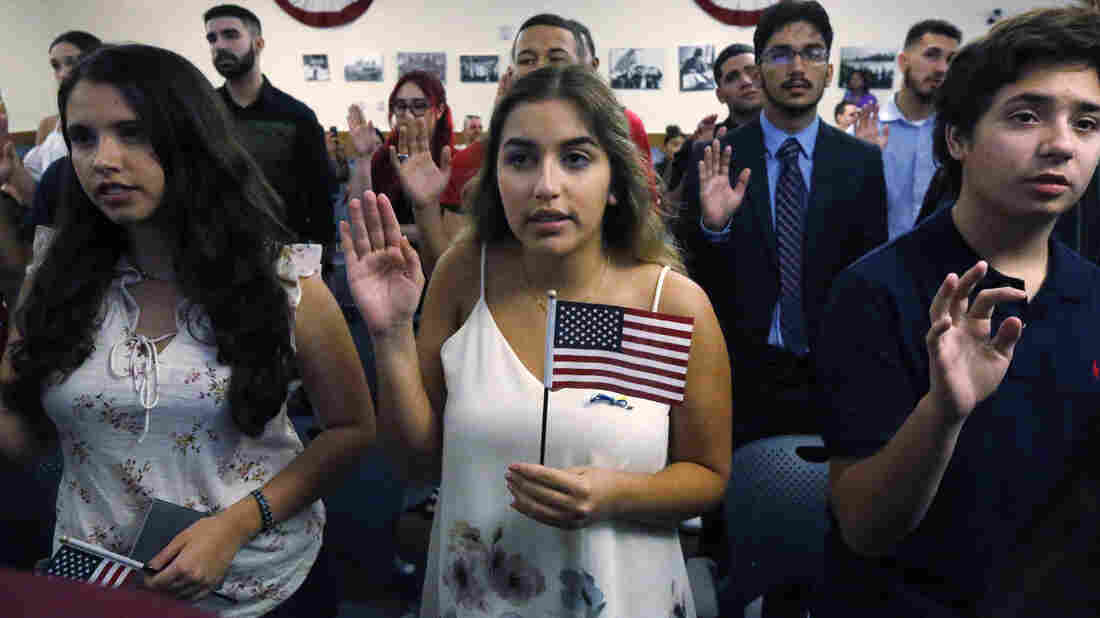 Ericka Ames, center, of Nicaragua recites the Oath of Allegiance during a naturalization ceremony at the U.S. Citizenship and Immigration Services in Miami. The backlog of citizenship applications has increased dramatically under the Trump administration. Wilfredo Lee/AP hide caption 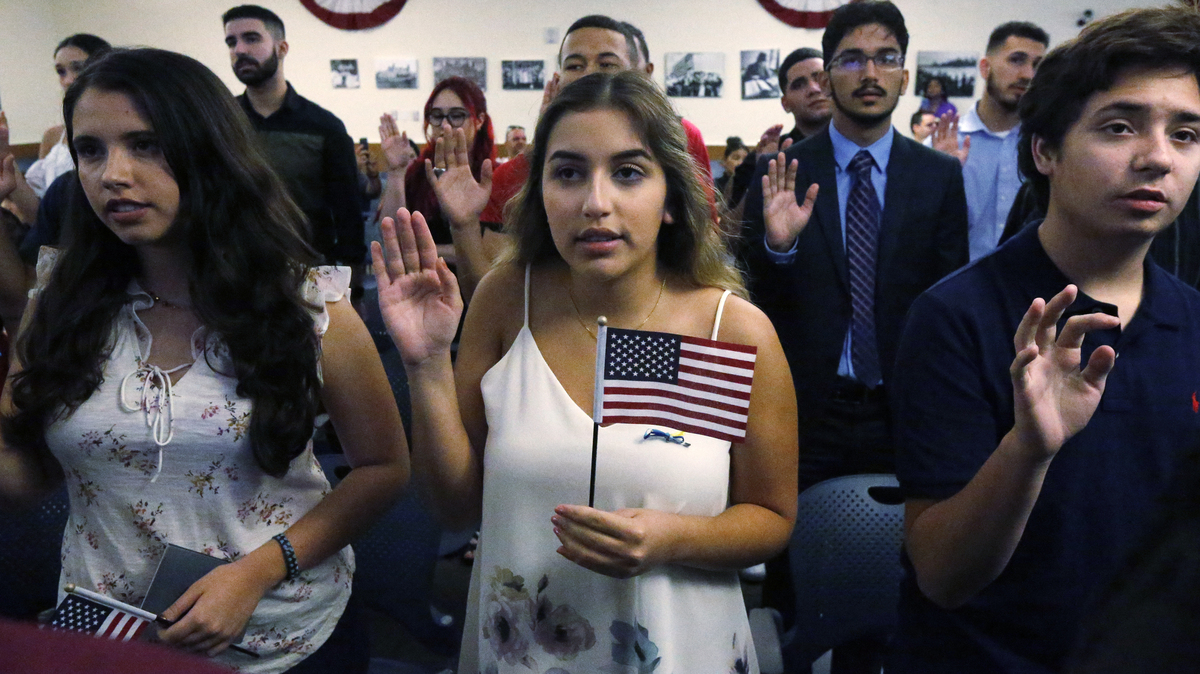 Ericka Ames, center, of Nicaragua recites the Oath of Allegiance during a naturalization ceremony at the U.S. Citizenship and Immigration Services in Miami. The backlog of citizenship applications has increased dramatically under the Trump administration.

The line of immigrants applying to become U.S. citizens is becoming longer.

There has been a backlog of citizen applications for years. But the backlog has increased dramatically since President Trump took office. Immigrant advocates say this has become the Trump administration's "second wall."

On a recent workday evening, three immigrants sit in a small airless room in San Francisco for a free citizenship class. Their instructor, Samuel Bianco, dictates some key facts about American civics, slowly, so they can take notes.

"The president lives in the White House. Congress makes new laws," says Bianco, who works for the International Institute of the Bay Area, a group that provides legal immigration services.

Bianco's students are lawful permanent residents preparing for the U.S.citizenship test and interview. But for some applicants, the hardest part may not be the test. It may be in getting an appointment to take it, says Bianco.

Before the 2016 election generally, applications would take four, five, six months to process. And now they're taking ten months to a year.

"Before the 2016 election generally, applications would take four, five, six months to process. And now they're taking ten months to a year," he says.

The wait is longest in cities with large immigrant communities. In Washington D.C., it can take up to sixteen months; in New York City twenty-one months; Atlanta twenty-two months.

"This is, in the best situation, a form of ineffective bad government," says Diego Iniguez-Lopez, a spokesman for the National Partnership for New Americans, a coalition of immigrant advocacy groups. He's also authored a report on the backlog called "Tearing Down the Second Wall."

"In the worst case scenario, it's a form of voter suppression from an agency that's becoming more and more part of the Trump administration's agenda against immigrants," says Iniguez-Lopez.

According to the most recent government data, there are more than 750 thousand pending applications for citizenship. That's almost double the number in 2014. And up nearly 20 percent since Trump took office.

Administration officials reject the idea that there is anything sinister in the rate of processing citizenship applications. They say there's a simple explanation for the backlog: More people are applying to become citizens. And they point out that the total number of people who are naturalized each year has remained virtually unchanged.

Our statement the @washingtonpost editorial board didn't think readers should see today. An omission of relevant #naturalization facts that don't fit their narrative @PostOpinions #immigration pic.twitter.com/9mM5hpr6IP

But there are other factors that have slowed down the process. First, during the Obama administration, the citizenship application form doubled in size to 21 pages.

Then the Trump administration made the interview process even more rigorous and time-consuming, according to instructor Samuel Bianco.

"Students are coming back and they're talking about being asked about every single bit of information no matter how minute it may be in that application. And so yes, we feel the citizenship interview is tightening," he says.

One of Bianco's students, Dennis, spends hours preparing for his interview. He's a former diplomat and asked that we only use his first name because he fears reprisals against his family in Venezuela.

Dennis says he's already submitted his application with his fingerprints, and paid the $725 fee.

"Yeah! I am nervous," Dennis laughed. He says he is worried about passing but he tries to imagine how he'll feel the day he becomes a citizen.

"I am celebrate. I am very happy. I am feel very good," he says.

Dennis' interview and citizenship test is scheduled for next week. He's been waiting ten months.